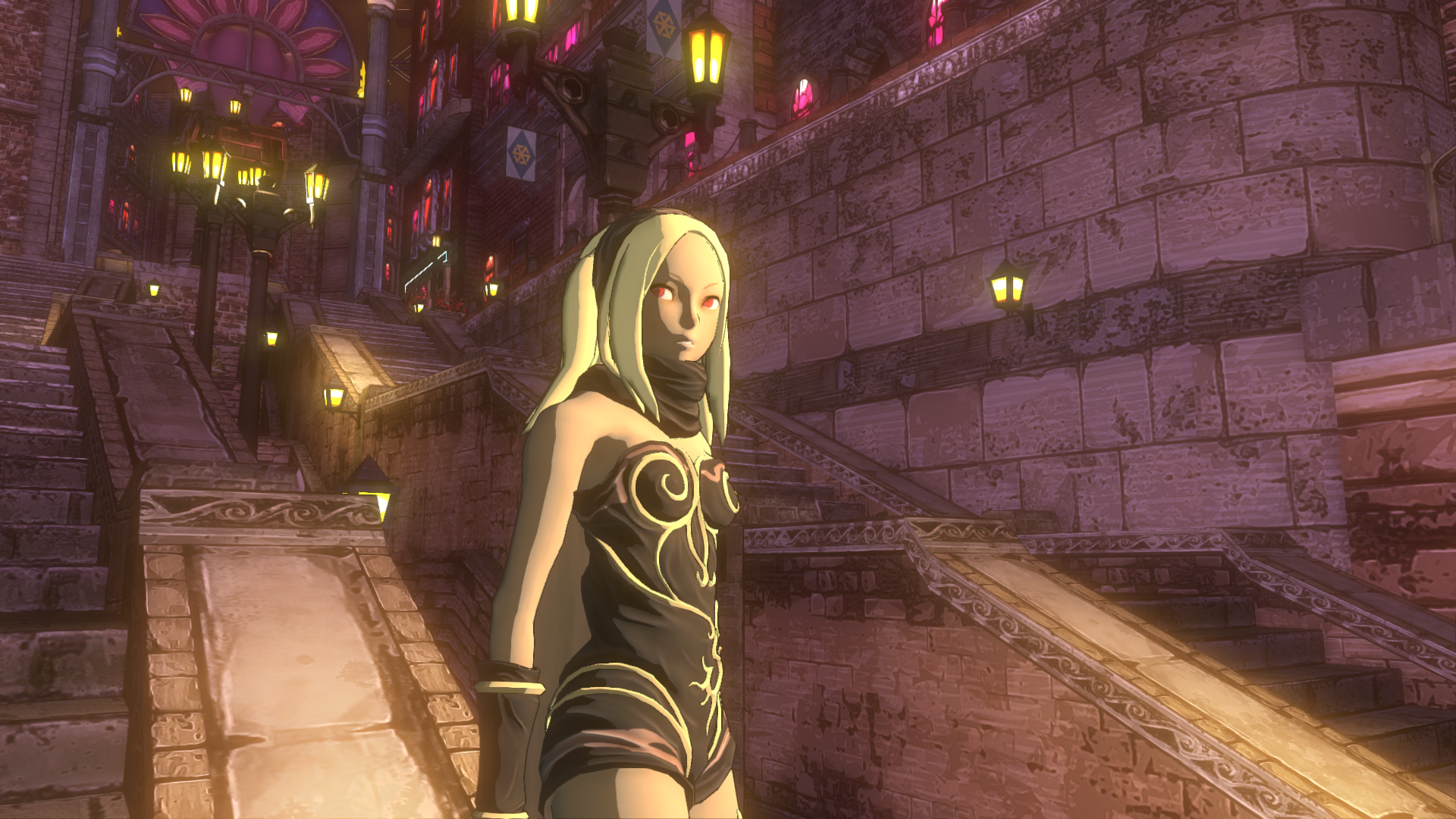 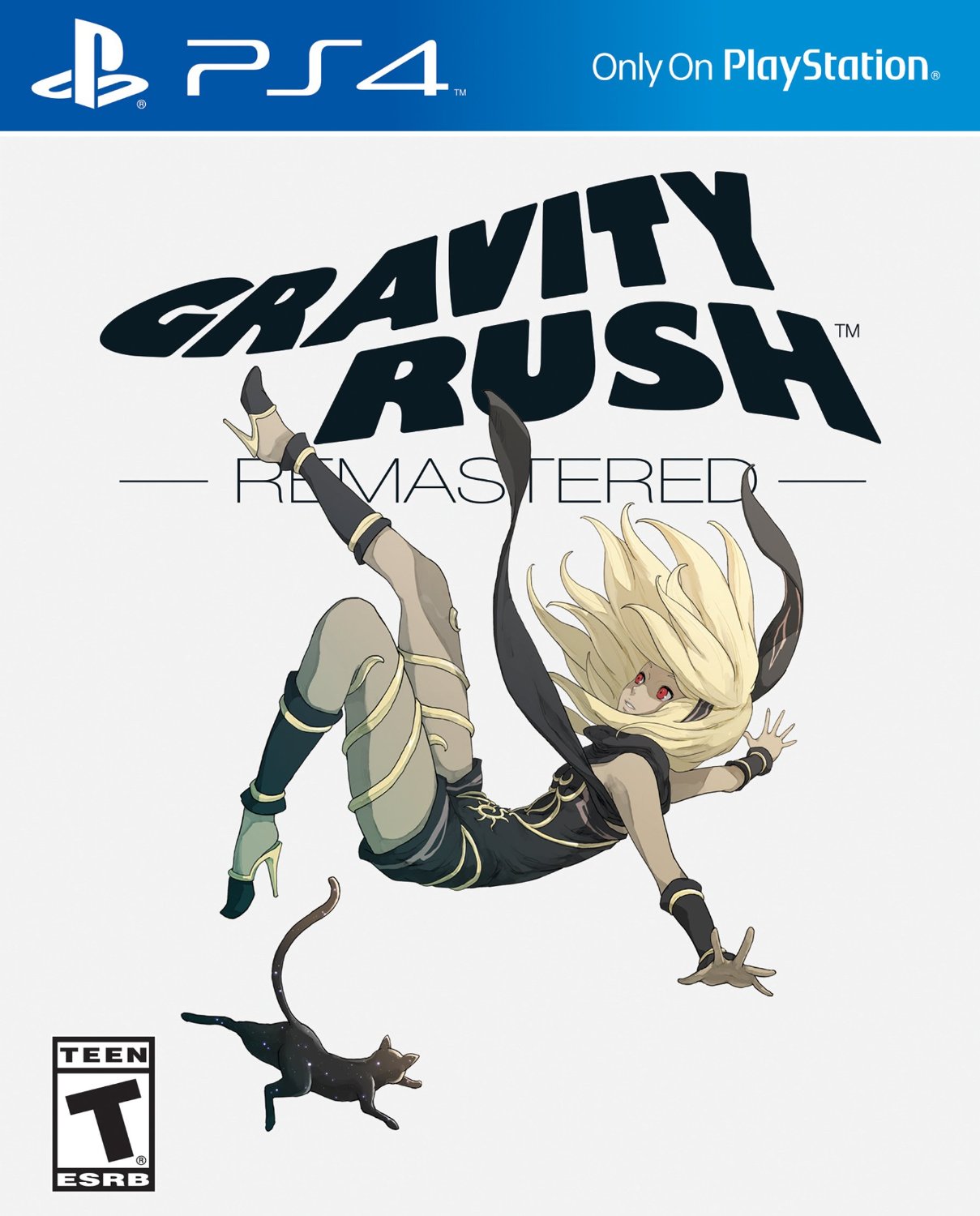 Fantasy cities are the best cities.  Free of the needs of strict urban planning and the practical necessities required to get thousands of people moving about in their daily lives, they can be created any which way so long as it ends up being interesting.  Gravity Rush Remastered is technically a game about running on walls and ceilings, flying through the air to deliver a face-stomp to menacing shadow beasts, and solving the mysteries of how this city ended up here in the first place and what is the nature of the threat attacking it.  In theory at least, the main character is the amnesiac Kat, who got hit with a bad case of narrative-cliche amnesia at the game’s start and is now coming to terms with the powers granted to her by her starry-cat companion Dusty while finding a place in the city.  Really, though, Kat co-stars with the city of Hekseville and its streets and architecture dominate every aspect of the game as much as Kat’s abilities do.

Hekseville is a bit of a mess.  It seems lively enough at first glance but there are bits of it missing, its people are under attack by the shadowy Nevi, and its gravity-defying hero Raven seems to be pursuing her own agenda.  Someone else is going to have to start putting the pieces back together, and seeing as Kat has the same powers as Raven but a far more helpful and perky personality, she’s going to have to become the hero despite her amnesia leaving her under-informed as to certain consequences of her actions.  Retrieving Hekseville’s lost boroughs and fighting the people who want to steal the Sacred Gems in its statues puts the town in more danger than is readily apparent, but fortunately Kat is a classically upbeat hero who actually likes helping people.  It’s a refreshing change from the drama-laden, anti-heroic, or overly self-aware protagonists so many games feature, and she perfectly suits the fantastic city she lives in.  It’s a giant playground for a gravity-powered hero, with each neighborhood having multiple layers to explore and gems scattered everywhere in a fashion almost identical to Crackdown.

Hunting orbs all over Crackdown‘s Pacific City could easily become an obsession, and nothing derailed a mission faster than catching a glimpse of pulsing light in a section of town you’d somehow not explored quite so thoroughly as you’d thought.  Other than a few super-tricky areas, the challenge was about finding orbs rather than collecting them, and the search not only helped the player learn their way around a huge, multi-island map but was also actively fun, like you were a super-powered high-jumping pac-man.  Now imagine if Pacific City had floated in a void, was designed for pedestrian traffic rather than cars, had multiple layers including a giant network of huge girders acting as a foundation, and you could walk on any surface for as long as your gravity-warping powers hold out.  There’s a lot more to Gravity Rush Remastered than chasing down every last giant crystal stashed on the walls, roofs, tunnels, and underpinnings of the city, of course, but it’s surprisingly hard to focus on getting to the next story mission or activity with all those purple gems decorating the place. 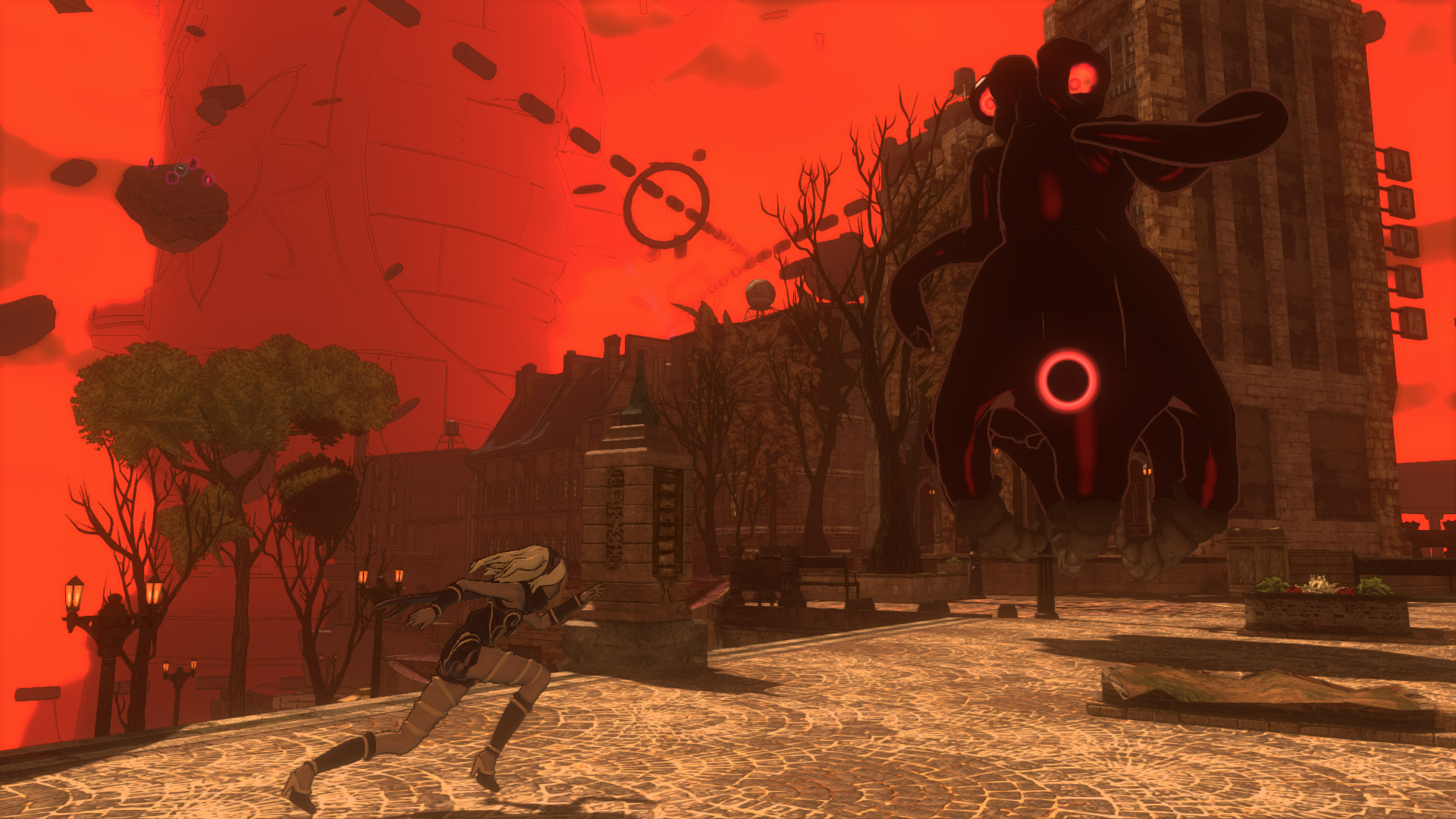 The first map of the city looks fairly busy.  A red icon indicates the next story mission, blue word balloons are people you can chat with for a little exposition about how the next mission fits in with the city lore, and green or orange icons indicate challenges that aren’t central to the story but do reward you nicely on completion.  While the gems are generously scattered throughout the city, you’ll need more than what’s available to power up Kat’s abilities to their fullest, and the challenges provide a good reward for the effort.  Fight waves of monsters, use the Stasis Field to move items around, and race in a number of different time trials.  The challenges are basically mini-games to give each of Kat’s abilities a workout, from the Gravity Slide (zip along the ground at high speed) to the full range of combat abilities, especially the Gravity Kick.  The Gravity Kick is Kat’s go-to combat move, an air-dash that plants her foot solidly in whatever it’s pointed at, with more power the farther away she starts from her target.  Combat is initially a ground-based affair for a short period at the start, and then once you level up the gravity power gauge and can hang in the air longer, changes to a high-speed game of Gravity Kick, choose a target, Gravity Kick, etc.  It may not be the deepest system but it’s effective, and can be a lot of fun when there are multiple enemies circling around, letting off ranged attacks in large clusters, and making you think a bit before charging in and mashing the kick button.

While the challenges fall into straightforward categories, the actual story missions come with a good amount of variation.  Each mission comes with several things to do, from running around town talking to people for information, or tracking someone from a distance, sneaking into a guarded area, exploring, racing, lots of combat, and any number of other activities that put Kat’s abilities to the test.  Most importantly, each part of the main quest combines the action with a good chunk of storytelling, with plenty of major plot elements starting off as misadventure.  Between one chapter and the next, new people pop up on the map to talk to, new side-quests may appear, different challenges show up, and of course there are bound to be a few gems to chase after.  Or you could walk through the city and explore, ignoring the gravity abilities completely for a while and just enjoying seeing how the various areas fit together. 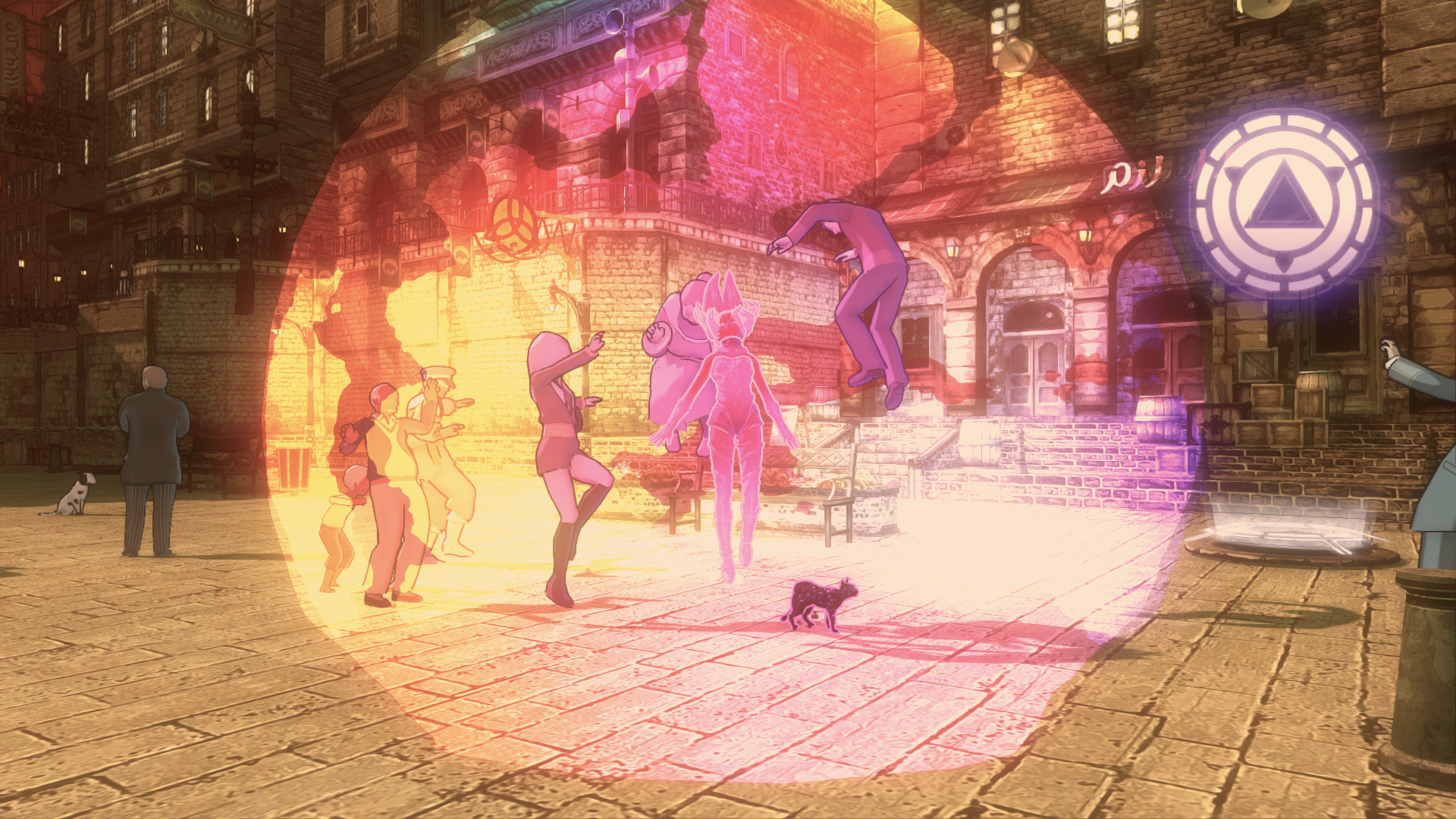 Which isn’t to say Gravity Rush Remastered is a sedate game, just that it lends itself to taking in the sights between chasing after the action. Most of the time the fighting is in open areas, which is when the game works best, but every now and then you’ll run across a section where every single weakness in control comes out to play.  Gravity control is enabled with the R1 button, with a blue target showing which way you’ll fall.  Point the target at the ground and you’ll be vertical again.  Point it at a wall and you’ll fall towards it, standing sideways when you land.  Try to land near a corner, of which there are a near-infinite amount, and you’ll end up with a 50% chance of standing on the wrong surface.  The camera will try to keep up but with the amount of perspective-changing it can easily be overwhelmed, frequently twisting crazily before settling down at the right angle.  When you’re flying through the air kicking shadow-monsters in their exposed, glowing weak points this isn’t an issue, because who cares where “up” really is at that point.  Trying to land when the energy gauge is at a sliver and ending up on a wall over the abyss, on the other hand, is more problematic.

Many of the challenge races take place on multiple surfaces and switching between one and the next at speed is frequently harder than it seems like it should be.  It also doesn’t help that, if you land on stairs, the game engine thinks you’re standing at an angle, and one particular fight near a circular pipe was maddening due to the sheer difficulty of finding the right part of the pipe the game considered to be the floor.  When trying to stand on a flat surface to deactivate all powers so the energy gauge refills, it really helps if the engine doesn’t think “Ooh, 5 degrees off perfectly flat!  That’s gravity powers in full effect here.”  I’m feeling pretty sure I can do that in real life without needing a magical cat to grant me special abilities.  Annoying as this can be, though (and it can get really obnoxious), the rest of Gravity Rush Remastered is so incredibly well done that it’s hard to hold a grudge. 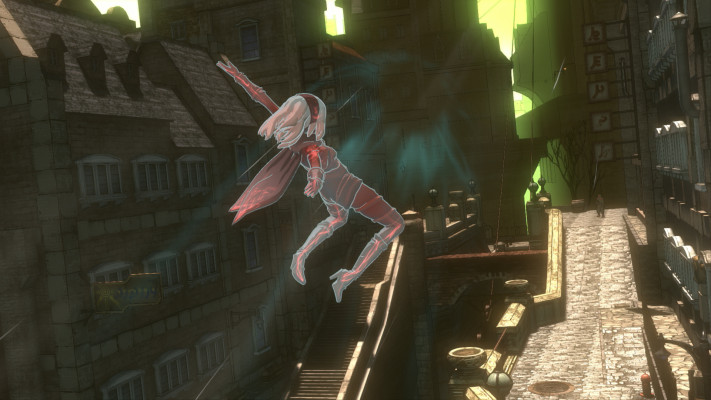 Gravity Rush Remastered is close to perfect.  The original Vita game was very well received, and while this update doesn’t exactly push the PS4 to its limits, it still looks and plays extremely well.  It’s got a big open city to explore that’s intricately designed and just feels nice to walk through.  Each of the four major areas has its own design style, and all of them are packed with events and other reasons to explore.  The combat is fast-paced and fun, and the story missions are always engaging with a large amount of variety not only between the chapters but also within them.  Kat is a truly likable character too, strong and cheerful while not overdoing it.  There are certain aspects in the use of her powers that could stand to be beaten with a blunt object until they respond better, but somehow the game rises above this and becomes fantastically playable from beginning to end.  Kat, her cat-companion Dusty, and the entire supporting cast bring their world to life in a huge adventure set in and around a fantastic city, making Gravity Rush Remastered a must-play for anyone who never got the chance to see the Vita original.