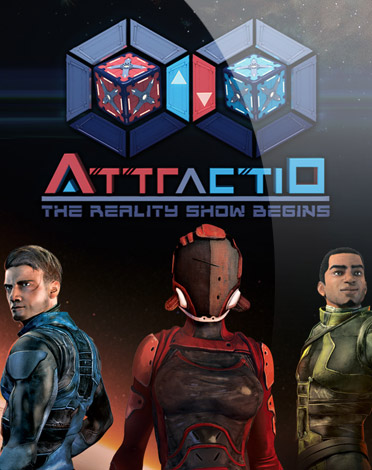 The first reaction you’re going to have when you see Attractio is “oh, so it’s a Portal ripoff” and you wouldn’t be entirely wrong, either. But your second reaction is probably going to be to write the game off and move on, and that’s where I’d recommend you ignore that impulse. There’s simply no denying the Portal influence here: you’re tasked with using a space-time bending gun to move boxes and solve dangerous puzzles in sterile test chambers while an obviously evil voice speaks to you. It practically begs for the comparison. But that’s nothing more than the trimming around a surprisingly solid puzzle game well worth a second look if you’re the type who enjoys a little mental gymnastics.

Portal fans break down into a neat little Venn diagram: there’s the people who love the story and atmosphere, and the people who love the puzzles. Obviously those two groups mix a bit here and there, but if you’re being honest, you can probably fit yourself into one camp or another. Personally, I’m in the former camp: it was brilliantly written and hilarious, and hey, solving puzzles is all right too, I guess. I’m that breed of gamer who loves the idea of puzzle games more than actually playing them. When I get stuck on a puzzle, an internal countdown timer starts to mark when my patience will run out and I’ll decide I’m done with the game entirely, so it was ultimately the writing that pulled me through Portal. I think that’s an important distinction to lay out now because Attractio is not a game I would’ve finished had I not been reviewing it, and for anyone in the same camp, Attractio might be a hard sell.

Attractio might look a little cheap to the eye, but it is no slouch when it comes to puzzle design. You’ll play as one of three characters—Dalek, Keir or Mia—at any given time, each with a different combination of abilities. For instance, Keir gets a gun early on that lets him change the gravity orientation on the various boxes you’ll find in each chamber, while Mia instead gets the ability to flip her own gravity and walk on the ceiling. Dalek gets both the gun and the gravity boots. Each chamber will ask you to move boxes onto switches to open doors, deactivate lasers or turn on/off energy fields that the boxes can’t move through, but you can. There are standard boxes, big boxes and boxes that automatically change the gravity orientation of any box that touches it. Some levels have lava pits you’ll need to cross or avoid, laser fields or other hazards. There are high ceilings and long drops that will kill you if you fall up or down, respectively. You can align a box’s gravity toward a wall to use for a controlled fall, or use them to skim across an energy field over a lava pit, or even align two boxes’ gravity toward each other as a zero-G floating object to hit a switch. To put it mildly, there is a lot going on in Attractio. The game eases you in gently, but it takes off the kid gloves very early and only gets harder from there. By the end, every single puzzle room was stumping me over and over in stages. I’d solve one part and feel brilliant, then get stuck again immediately afterward and feel unbelievably stupid. I spent an hour and a half on one puzzle; I spent two days on another. It’s the kind of game you’re going to need to walk away from occasionally and let your subconscious take over for a while. It is a perfect mixture of satisfaction and relief when you finally solve a puzzle. 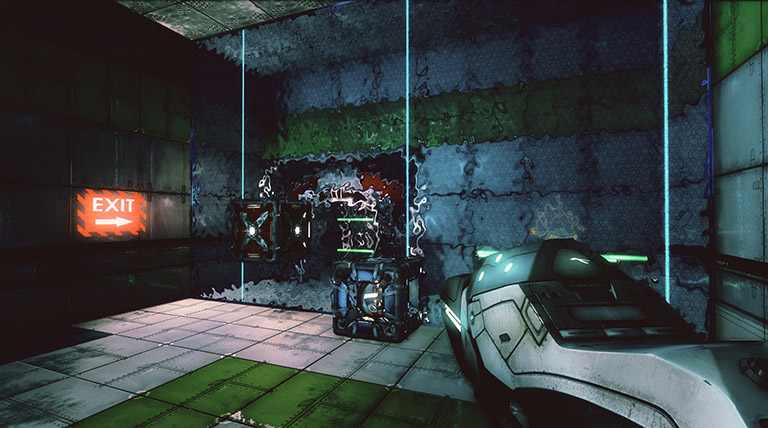 That said, if you’re not super into the idea of banging your head against a puzzle for days, Attractio is not the game for you because there’s nothing else here to keep you coming back. The premise here starts out kind of interesting: in the year 3275, “Attractio” is a reality game show hosted by the megalithic White Ark corporation where contestants compete for various prizes. Dalek is a prisoner who wants his freedom to prove he was framed for the murder of his girlfriend and two men; Mia is a cop who wants advanced technology to better fight crime; Keir is from a poor background and wants money to help reinvigorate his community. There’s also a reality show announcer who’s exactly as enthusiastic and annoying as you’d want him to be, but don’t worry, he’s totally not evil at all and neither is White Ark. Never mind the hacker group Ogun Hand that occasionally buzzes in to remind you not to trust White Ark. Everything begins a bit like an episode of the British techno-paranoia show Black Mirror in a pretty fun, albeit ham-fisted way, but as the story goes on, it loses steam fast. The voice acting is so laughably stilted that it stops being laughable about halfway through and starts being legitimately confusing. It’s hard to tell if they were going for a specific effect or if the voice acting really is just that bad and the characters really just that uninteresting. Even as the credits rolled, I still couldn’t quite tell. Suffice it to say, Attractio‘s story isn’t the draw here the way it was for Portal, but that’d only be a shame if the puzzles weren’t so satisfying.

At times you’ll feel like you’re breaking the game’s mechanics to pull off a solution the design couldn’t possibly have accounted for, and that’s exactly why it’s so satisfying to solve the puzzles in Attractio. Every chamber builds from a lesson you’ve learned in a previous one, layering on the complexity quickly but fairly, demanding you to explore your options and abilities to succeed. You’ll wander around a level hopelessly, seeing absolutely nothing jump out at you as a solution, then finally after some experimentation you’ll have a little “eureka!” moment that sparks a new chain of thought. More than almost any game I’ve ever played, Attractio made me feel like the smartest man alive whenever I’d solve an especially difficult puzzle. That said, Attractio‘s basic mechanics are a letdown, frequently getting in the way of progress. Movement feels stiff unwieldy like a twenty-year-old first-person shooter, with way too much gravity, making it hard to execute on ideas for potential solutions. Even by the end of the game, basic skills like jumping to the exact intended spot instead of to a sudden, jarring death still eluded me. 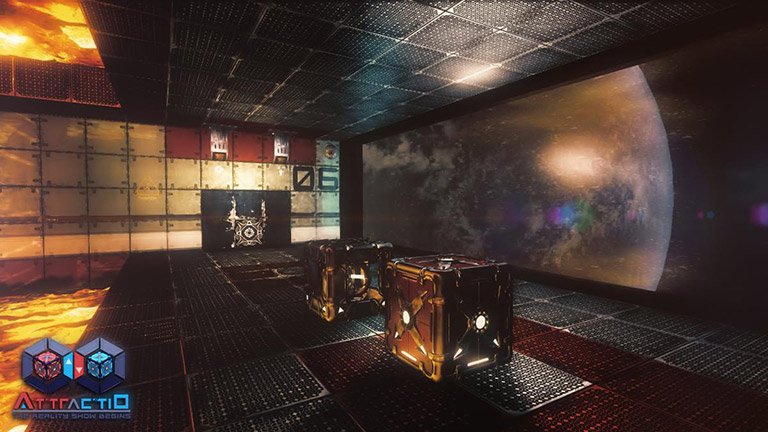 There’s not a lot about Attractio to pull you in from a distance. It doesn’t look, sound or even feel that great. Its story is obvious and uninteresting. Everything about it screams “knockoff” like a “ROLAX” watch, but don’t be fooled: if you’re a fiend for devious puzzles, Attractio is the real deal.