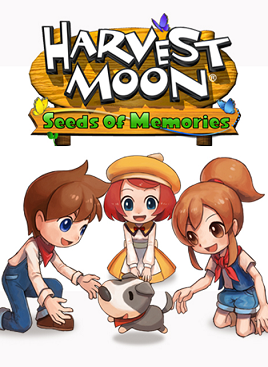 What the? How is this even a game? There are no heads to detonate, no vehicles to crash and no world to save. Is this seriously what passes for entertainment these days? Why, back in my day, even the children’s games featured crushing innocent creatures with a jaunty hop. Well, at least there are rocks to smash…

All stupidity aside, it’s nice to see another new Harvest Moon after the series was so unceremoniously snatched away by XSEED and re-titled as Story of Seasons. Natsume’s niche series has established a loyal following across all types of gamers for good reason. This farming series is just an amiable way to take a load off, plan crop placement, talk to some villagers and just enjoy escape from the ever increasing havoc of life. It sounds silly and mundane, but escaping to the idyllic nature of a Harvest Moon title can be as therapeutic as a meditation session.

This isn’t to argue that there is no challenge or drive to succeed in one of these games. While not exactly tense, the way to succeed in one of these is to manage time wisely. There are only certain hours in the day in which to feed the animals, water the crops, harvest, sell, talk to villagers, and so on. The ever present stamina bar dwindles as tasks are performed, requiring meals to replenish. Completing tasks and running a profitable farm allows better tools to be purchased, allowing for more profit to be earned in the same amount of time. The home can be expanded, gifts purchased to win over the townsfolk, and eventually marriage can be pursued. This is all general to the series, though. The thing is that Harvest Moon: Seeds of Memories does not add very much to the established formula. The story of this one is that the new agriculturalist takes over a forgotten farm to rebuild. He is implored by sprites at the farm to do well as the farm has been forgotten by all the locals. By expanding, performing certain tasks, and profiting, the titular Seeds of Memories will be recovered, and the townspeople will remember. While not dire, this does provide a certain drive to unlock each and every seed. 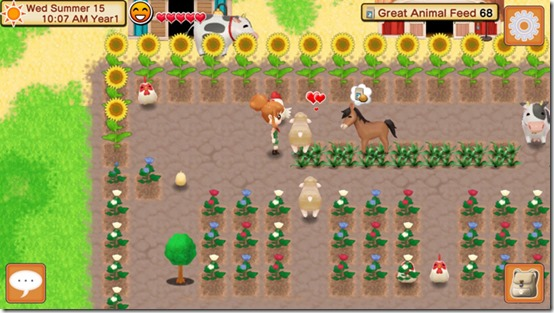 Still, speaking the the villagers and the sprites, it is as though the common belief is that east of the village lies a swirling vortex of nothingness from which no light nor hope can escape. At least, that is one theory. Why they would want to live a stone’s throw from Cthulu’s rumpus room was never explained.

As far as what is new in this edition, beyond the fact that it is on iOS devices (the Android release is scheduled for later this year), there isn’t a heck of a lot. The biggest addition is a new pet, the bobcat. This critter is untamed at first, but can be befriended by the player over time. As a cat person, this is appreciated. Beyond that, there are the normal festivals in which to participate, contests to win, and crops to grow. No one is arguing that there is nothing to do here. Between fishing, mining, and so on, players who tire of the farming grind can always find something different to putz around with while still earning that ever important money. 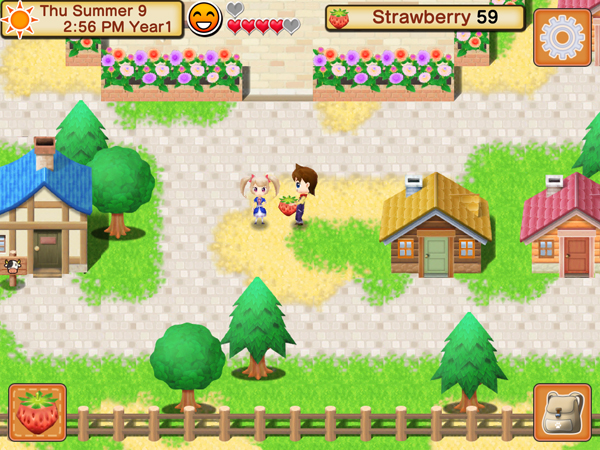 It should be noted that the graphical look of this title is a major downfall for this player. While the colors and art itself are crisp, there is an overlying veneer of generic cuteness to the entire thing. Frankly, it reminds one of that defeated blight upon civilization, Zynga’s Farmville. It does not adopt the isometric perspective of the loathed pestilence upon everybody’s feed. Instead it sticks with the top down view seen the the SNES and Game Boy Color editions. However, the animal and character designs are extremely reminiscent. Certainly, this comes down to personal bias, but Natsume has done better in the past and can do so again.

Fortunately, the jump to mobile did not affect the controls. Character movement is a simple matter of touching the destination. Holding the thumb in place will keep the sharecropper moving. Farming is also extremely simple. There are two modes: farming and everything else. When in farming mode, tapping a square will automatically make the cultivating character to perform the relevant action. Tilling the soil, and turning around to water plants thankfully avoids forcing the player to equip the correct item. This dedication to simplicity, allowing the audience to just do it, is greatly appreciated. 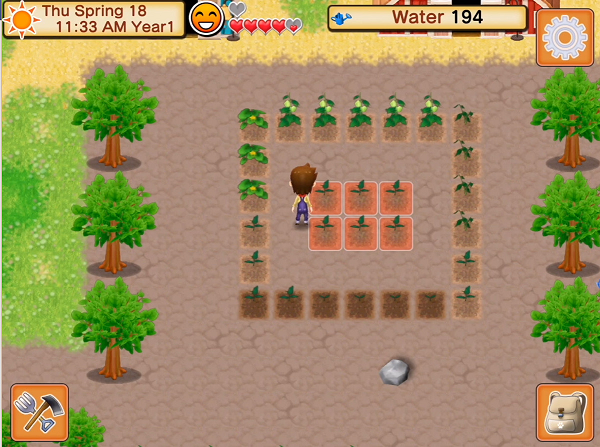 There isn’t much more than can be said about this edition of the venerable series. Harvest Moon fans will find themselves enraptured all over again with the gameplay and world that these games create. These titles pride themselves on being relaxing experiences; a decompression chamber for the mind. Anyone who is not already a fan will not have their opinion changed with this title. That’s okay, though, not everyone has to like everything. While complaints about how little is new are valid, this is also a less expensive series entry when compared to its console and handheld brethren. There is value to this title, which is more respectful of the player’s time than so many other mobile games. For that, I’m willing to get down with this dirty hoe.