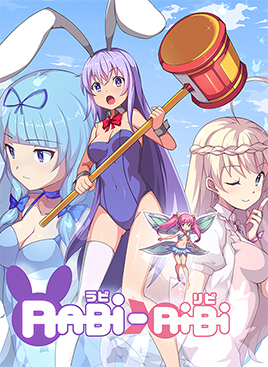 There is nothing a bunny-girl can’t do.  Fly on the back of a dragon shooting down raccoons?  No problem.  Dress up casinos in just about any RPG ever?  They’ve got that covered.  Fight a few dozen bosses in a bullet-hell Metroidvania?  Erina is on top of that one with her fairy friend and sidekick Ribbon.  Something very strange is going on in the land of Rabi-Rabi, as evidenced by the Erina having woken up in what appears to be a hospital closet in a new human-ish form instead of the bunny she started the day as.  Figuring that the person she only refers to as Master might know what’s going on, she escapes from the hospital and somehow ends up in a Metroidvania fantasyland where everyone has gone bunny-crazy.

“Everyone”, it should be mentioned, is comprised almost exclusively of cute girls.  Rabi-Ribi wanders between light pandering with occasional detours into somewhat pervy, but it’s all cute girls, all the time.  Every named character has her own dress-sense and portrait, except for the one male character who’s left as a sprite.  The style doesn’t effect the gameplay, though, and Rabi-Ribi ends up being a slightly risque all-ages Metroidvania with a bullet-hell makeover.

For a someone who used to be a critter better known for caution and hiding from what it can’t outrun, Erina eventually builds up an incredible set of moves.  At the game’s start she’s fairly weak, but her five-hit hammer combo rapidly comes into play and starts synching with her other capabilities.  The single jump becomes a double, she gains a slide move that later chains into a kick, gets a carrot-bomb, finds an air-spin attack and then upgrades it to combo several spins together, finds a wall jump, etc.  Many of the abilities come in the form of upgradeable accessories, so that single wall-jump eventually lets you bounce off three walls instead.  Additionally, the fairy Ribbon acts as ranged attack, with different wands available for regular shots, homing bullets, piercing laser, and several more, with the ability to charge the shot for a stronger effect, plus another ability that lets Ribbon fire while charging.  Searching the map for all these upgrades and abilities will comprise a large chunk of the gameplay, and by the time the credits roll Erina and Ribbon will have attacks and moves for every situation. 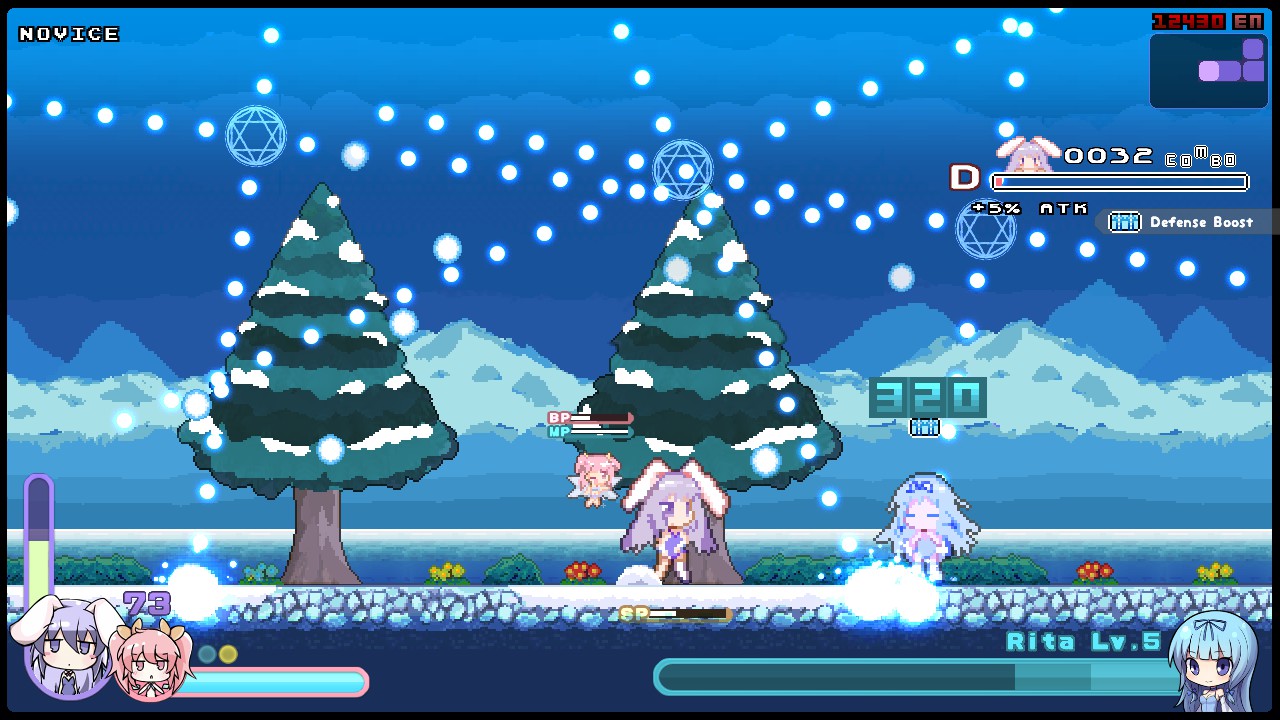 This doesn’t mean Erina’s a dominating monster of overpowered capability, though.  The regular enemies aren’t too much of a threat, although they’ll whittle the health bar down if you’re not careful, but boss encounters can take several tries and a few healing items to survive.  Rabi-Ribi isn’t shy about the bullet patterns, clogging the screen with glowing firepower that, in theory, can all be avoided if only you can find the pattern. Beams and waves and spirals of bullets make Erina’s life difficult, and a generous health bar is only so much use when the bosses pack the screen with bullet patterns.

The bosses are usually the girls you eventually end up recruiting to the home village, but while their friendship may come easy, there’s always a reason for a fight before they’ll actually join you.  Once you’ve recruited them, though, most of them will sell you temporary stat buffs that can be of significant help if there’s a boss rush ahead.  Others might sell you bombs, or teleport you back to a less-accessible area, or even provide an item of mysterious usage.  The menu gives a list of all the girls you can find, and it’s easy to beat the game with several spots left blank. 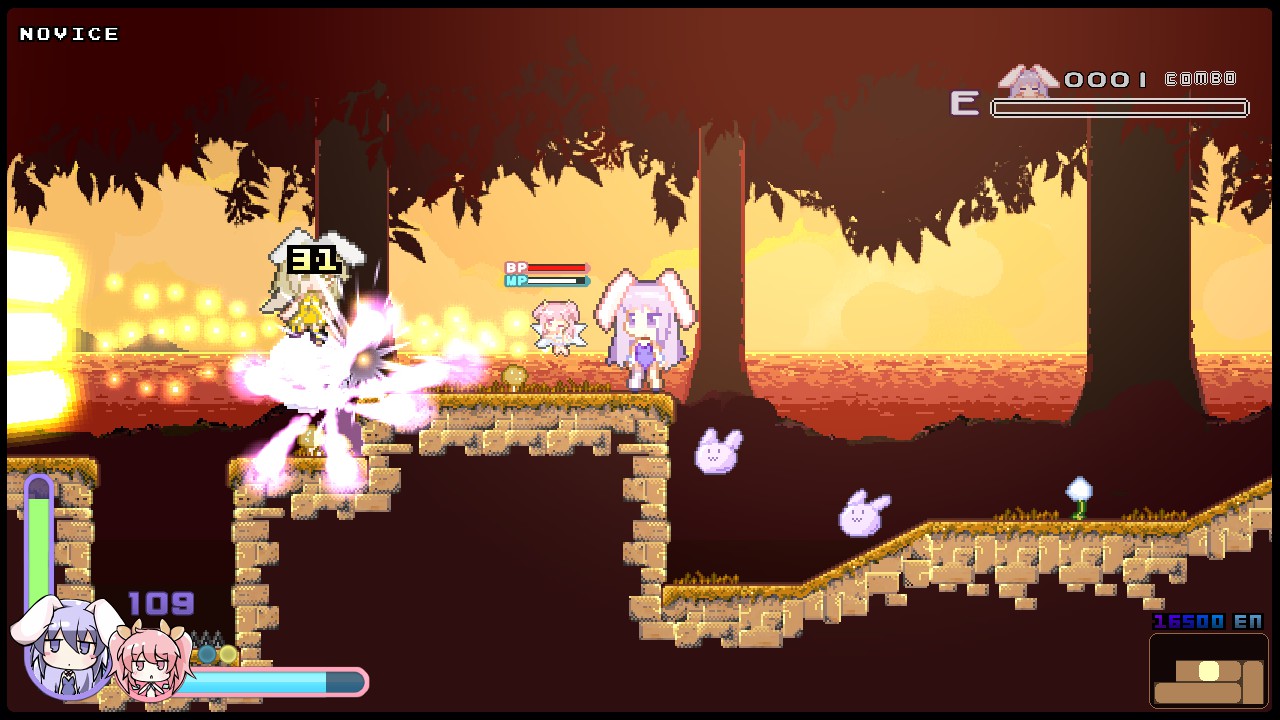 This is because the map is surprisingly large, with ten major areas divided up into sub-sections plus a few extra smaller bits as well.  Each area is filled with secrets and tricky sections to find, usually leading to a stat boost or new ability.  The pause-screen map shows the percentage of each area you’ve cleared, as well as how many items you’ve found out of the total available, and it’s not an easy feat to get everything even when Erina has all her powers.  The open-world nature of the map is free-form enough that you can even beat the entire game without seeing some of the environments, and 100%-ing everything is a major quest that will add several hours to the play-time.

As nice as the action and map exploration are, though, the place Rabi-Ribi falls down is in the plot.  The translation simply isn’t particularly good, and while sentence to sentence generally makes some kind of sense, it doesn’t hang together as any kind of clear story.  The rough outline of Erina scouring the island to recruit enough magic users to power a monument so she can find her master’s sister makes a little sense, but for as much talking as the characters do in the pre-fight scenes there’s not a lot being said or coherently explained.  Fortunately it’s just clear enough so you know what to do next, plus the glowing squares on the map are a nice clue as well. 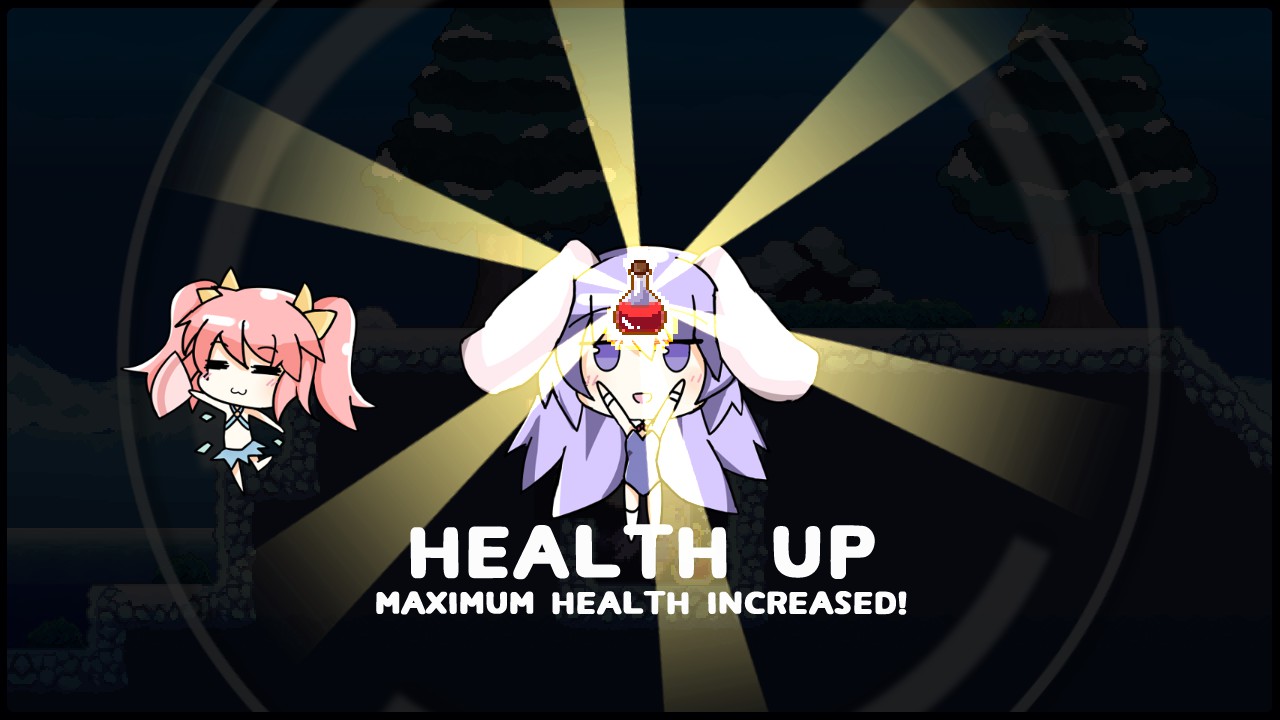 If the story is nonsensical, the fighting and platforming are great fun.  Each map is loaded with secrets, monsters and enemy bunny-girls have a wide variety of attacks, and Erina has the moves to handle all of it with grace once you’ve built up her arsenal.  The move list accumulates slowly enough so that by the end of the game you’ll be pulling off complicated maneuvers without realizing how many different button-presses were required to do it, and there are enough options available that you can change tactics at a moment’s notice or focus on a favorite play-style.  Bunnies are generally peaceful critters, happy to graze on whatever vegetation is available while hoping to be left alone, but Erina is going to jump, hammer-smack, bomb and (with Ribbon’s help) shoot her way through every threat and secret Rabi-Ribi throws her way.