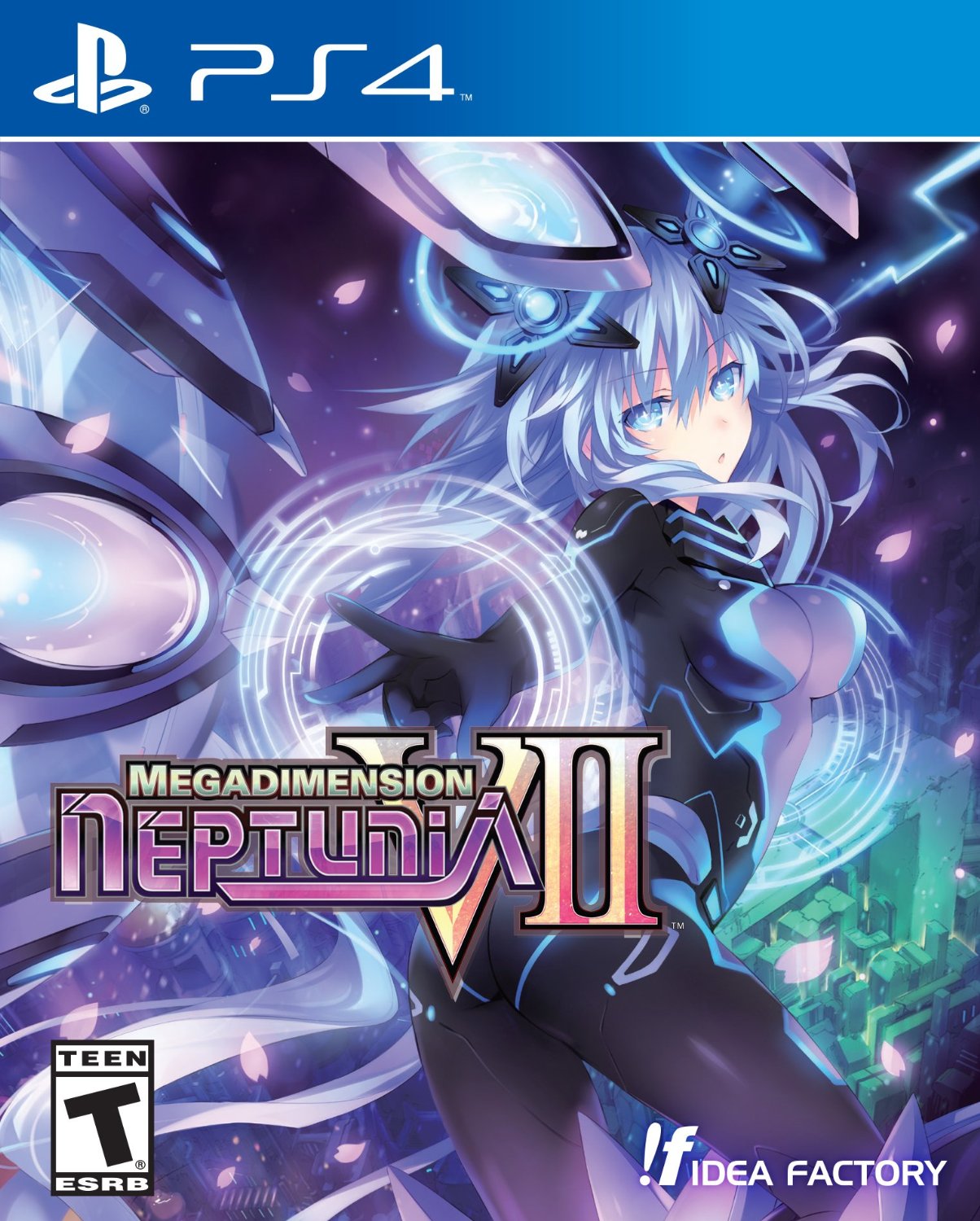 The Hyperdimension Neptunia series has been ongoing since 2010 when it landed on PS3. Since then we’ve seen the games come to PS Vita, PC and finally PS4. It’s obvious that a fanbase exists for these properties or else we wouldn’t already be on the fourth main series title (disregarding various spinoffs and remakes over the years). What is it that is so alluring to players? It’s simple — the game industry humor, enjoyable RPG battles and lively characters are all immensely charming. Regardless, even the most diehard fans can’t ignore some of the more annoying aspects of the games (such as constantly reused assets, among other things). With Megadimension Neptunia VII being the first Neptunia title to grace the PS4 came the belief that it would be a fresh start.

It’s true, a lot has actually changed with Megadimension Neptunia VII. The most obvious from the get go might just be the change in storytelling framing. Instead of experiencing a single tale, you’re actually given three. The crux of this is explained at the start when Neptune and Nepear are simply enjoying their time in Planeptune instead of doing work. This scene would be totally normal if not the fact that the CPU Shift Period is right around the corner. What the heck is that? It’s the game’s tongue in cheek way of referencing that a new console generation is on the horizon. Hyperdimension Neptunia made sense when wedged into the PS3/360/Wii generation with CPUs modeled after each, but things are starting to fall apart now that the PS4, Xbox One and Wii U are out there. Fortunately for fans, the CPU Shift Period does not mark the end of their favorite heroines.

Instead, what we get are three storylines which occur potentially exactly because the developers did not wish to phase out the existing CPU characters. Each tale deals with a parallel universe where (surprise, surprise) folks are in dire need of saving. For example, the first alternate dimension situates players right in the early 2000s when Sega is on its last legs in the console market, which is honestly a hilariously sad concept for this game to address. Despite the different characters and experiences within chapters, you’re still basically offered the same gameplay regardless. And wouldn’t you know it, it’s quite similar to the rest of the series as well. There are some key differences to note, though. Perhaps the weirdest thing about it is that the changes weren’t ones that were particularly required or that spruce up longstanding issues. If anything, some just prove a nice change of pace. 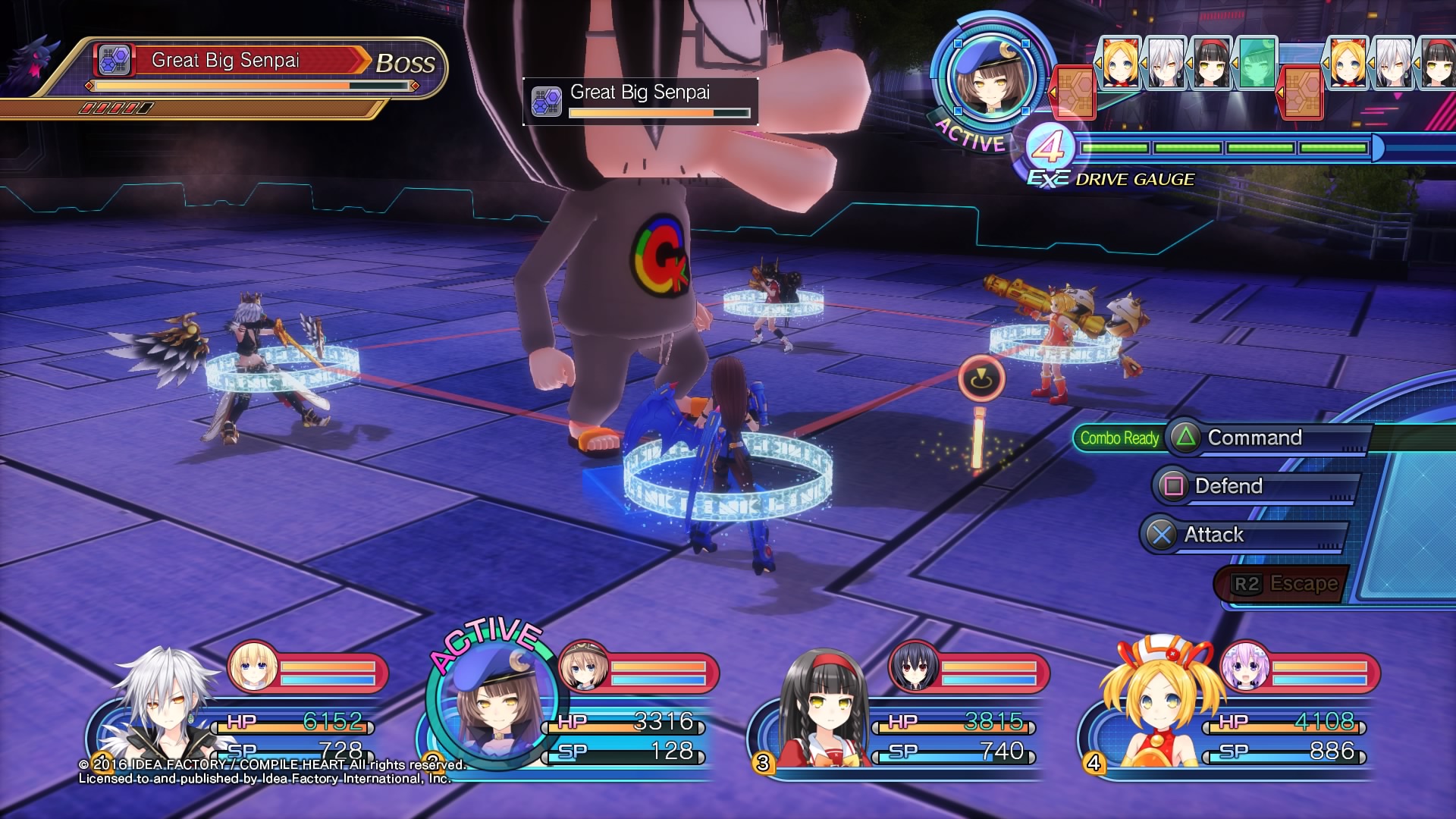 First there are the small things like a tweak in how characters move during their turns. Instead of being given a radial view to see the distance you can move, you’re now given a depleting bar. When the bar runs out, you’ve exhausted your positioning. Honestly, this change is meaningless considering it creates the same result. More interesting is the fact there is no guard breaking to be had anymore. This was once a key component of battles as you would need to whittle down that bar first with key attacks before finally digging into a monster’s HP. You still have three main attacks, but their differing purposes are kind of invalidated now. Don’t go thinking that this means enemies are suddenly a piece of cake! Without the guard bar they’ve simply added more bars of HP to worry about. Players can also now engage in a new team-based attack by triangulating their characters around an enemy. The only downside here is that they all have to be in the same mode (regular or HDD) for it to work.

Perhaps the coolest enhancement in Megadimension Neptunia VII is Boss Encounters. These sections pit you against massive enemies. They’re so large that you must actually move between a bunch of platforms to circle around the boss at all. The best general strategy in these instances is to keep everyone on different platforms lest they all get slammed by a powerful attack at the end of a turn. Beyond that, though, it’s more of the same. There are tons of dungeons to grind in, but they still retain their very enclosed stylings as per previous games. They also include tons of the same enemies we’ve been seeing for years. At least there were a few new ones added into the mix. There are also tweaks to what goes on outside of dungeons but they’re not all for the best. 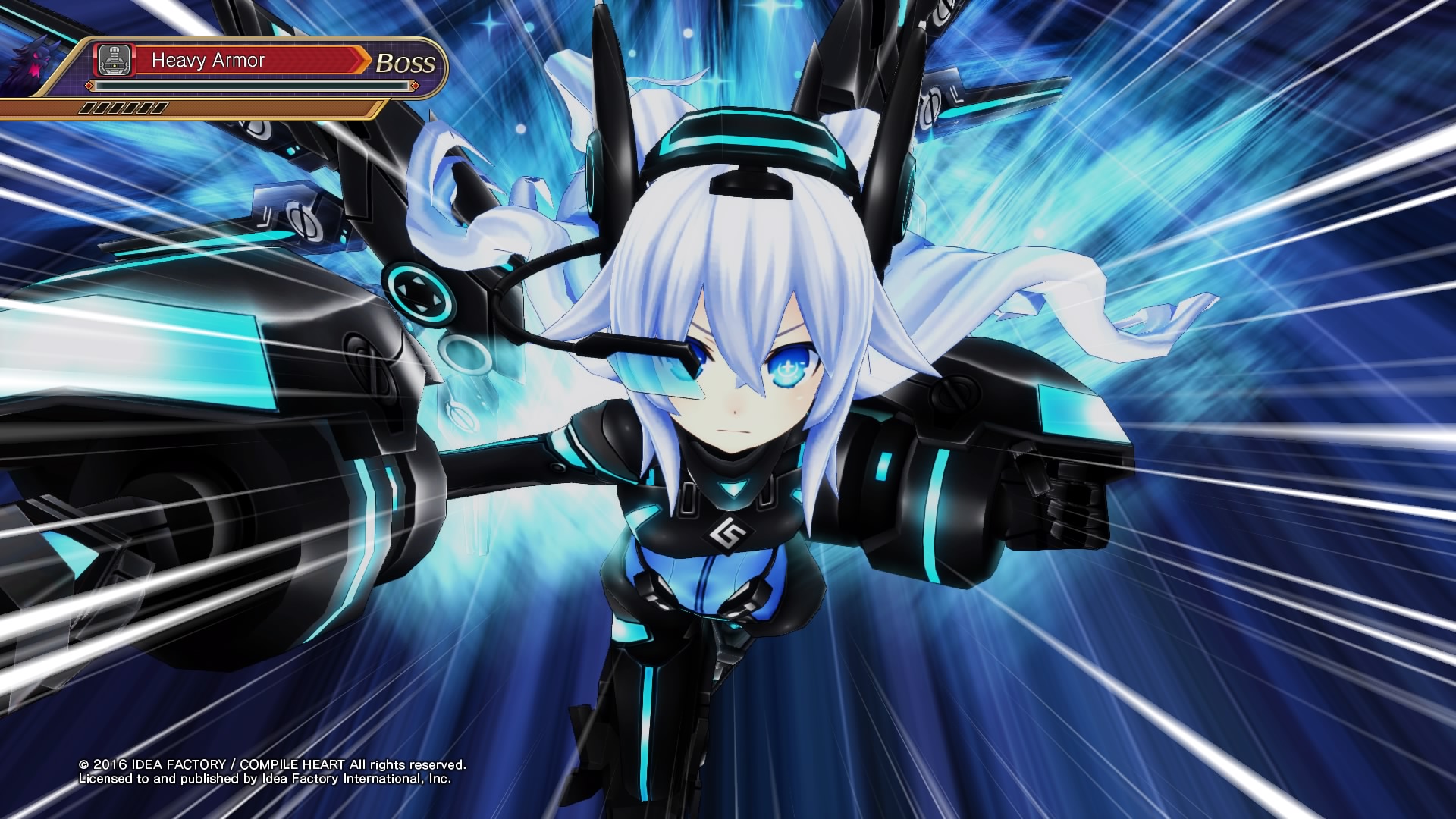 For some reason Megadimension Neptunia VII decided that simply clicking and entering your preferred dungeon wasn’t good enough. Now, you’re presented with an overworld map which features little connected nodes that chain together to create pathways. You must walk over every node on a line in order to reach the dungeon/town/etc. Sometimes there are enemies on these nodes which spark a random battle. Usually, these battles are really easy — but you have to fight regardless. This makes the simple act of preparing to enter a dungeon totally annoying as you’ve got to deal with random factors first. It’s particularly annoying when bailing out of a dungeon because you need to return to town to heal. Here’s hoping this aspect does not become a core component of future installments.

Visually, things are also a bit of a toss up. Fans have long since lived with this series despite the fact that it never has the newest, shiniest graphics out there. Even on PS4, it looks closer to a really good PS3 game. Character sprites look the same, but that’s to be expected with 2D anime artwork. As for voice acting, it’s still going strong — though those who prefer Japanese voices can nab the DLC and play that way. One of my personal disappointments is that, despite being a PS4 game, many lines don’t receive voice acting treatment. There also seems to be a bit more visual novel-style segments than before, only making the lack of voice in some sections even more noticeable. As for the music, as with many other aspects, it is primarily recycled from previous games. 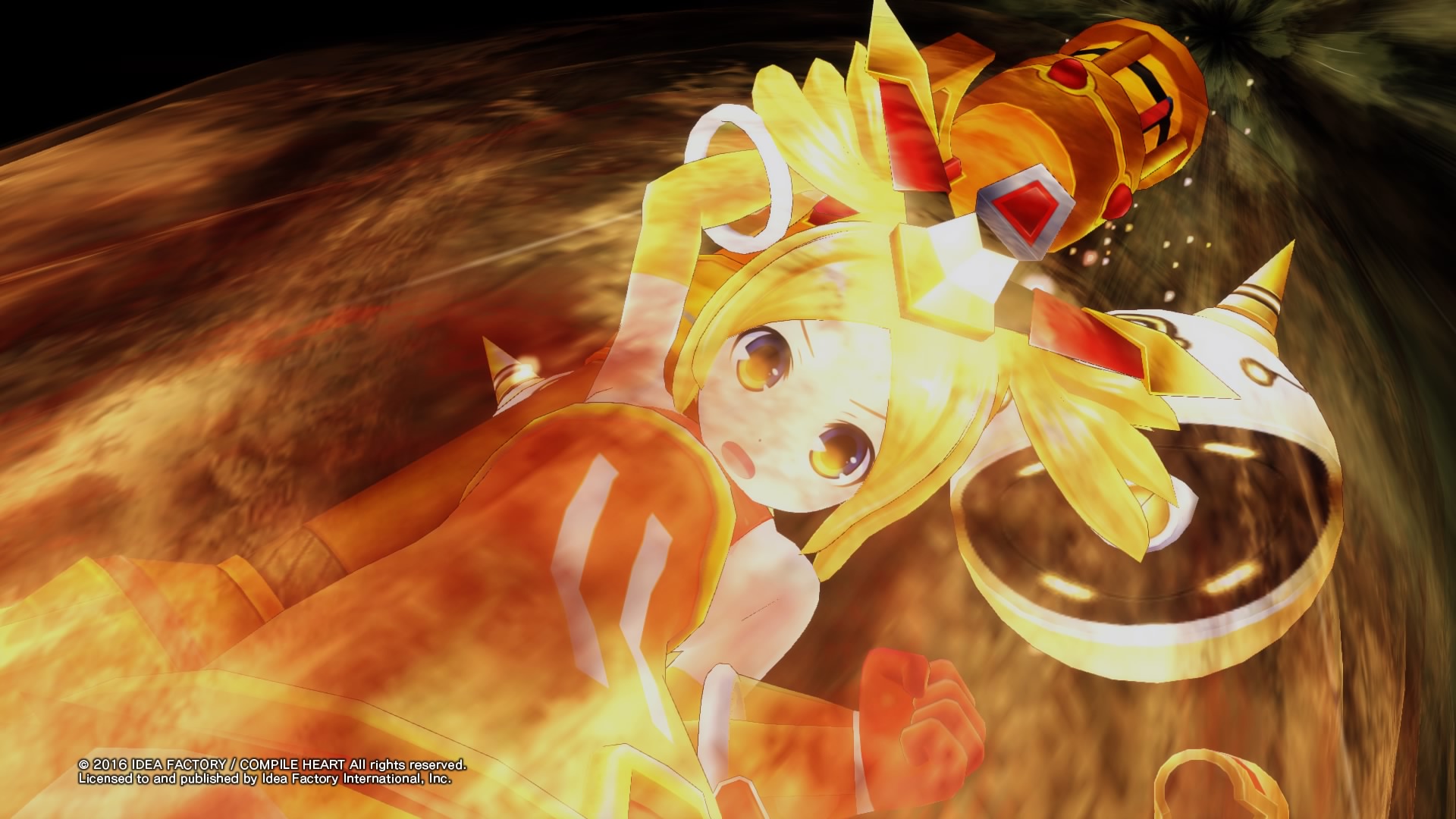 At this point, Megadimension Neptunia VII just feels like yet another Neptunia game. None of the positive changes are super groundbreaking and there are some negatives alongside them. Newcomers won’t feel drained by the reused monsters, stages and music because they’ve never seen them before — and luckily the core gameplay mechanics are fun alongside a campy video game industry-based story. Longtime fans will basically find exactly what they expect and not much more or less. If you’re still up for more of the same then go ahead and grab it on PS4. If you, like me, were hoping the PS4 meant a new era for Neptunia then perhaps it’s best to seek out other RPGs. Megadimension Neptunia VII is slightly refreshing, but not enough to really revitalize this aging series.