Fassbender, who is playing the roles of Aguilar and Callum Lynch in the movie, recently spoke with Empire about the film adaptation based on Ubisoft’s commercially successful gaming franchise.

“We’re not trying to make it too crazy violent,” Fassbender said, before adding, “although obviously there is an element of that, but what is really cool is that our action sequences are on real sets and real locations.” 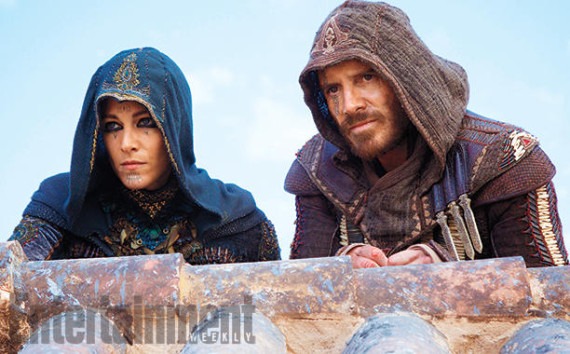 In the same interview, Fassbender compared the Assassin’s Creed movie to The Matrix, saying that he “always thought about” the Wachowskis’ 1999 cult classic when it came to working on the AC project.

“This idea of DNA memory elevates it from a basic fantasy genre [piece], because you have something an audience can actually believe in,” he explained. “Then the journey becomes so much more elevated, because you’re on board in a different way.”

For the stunts of the Assassin’s Creed movie, it would seem that the production company is going for an authentic approach, with Fassbender calling it “Old-school.”

“There’s very little green screen in this, which is highly unusual in these films,” he suggests. “We have stunt guys jumping across buildings in [Maltese capital] Valletta. We’ve got [stunt man] Damian Walters doing a 120-foot leap of faith, without any rope, into a bag, so it’s pretty incredible to see.”

Aymar Azaïzia, head of Assassin’s Creed content at Ubisoft, tweeted last month that the movie had officially been wrapped, which ended the production that began on the film in September 2015.

Fassbender will once again be collaborating with fellow Macbeth co-star Marion Cotillard for the Assassin’s Creed movie.

Directed by Justin Kurzel, who worked with Fassbender and Marion Cotillard on Macbeth, the Assassin’s Creed movie is scheduled for release on December 21, 2016.

For more on Assassin’s Creed, check out these recently released images of Fassbender playing Aguilar and Callum in the movie.