Although many gamers aren’t familiar with it, 1999’s Rollcage for PlayStation 1 and PC was a significant and popular combat racing game that had an interesting approach to physics. With double sided vehicles that could be driven up vertical walls and even on ceilings, and the ability to use an arsenal of weapons and defenses, races were not as much about winning as surviving.

In 2015, several members of the creative team behind Rollcage decided to Kickstarter-fund a spiritual successor called Grip. Using the Unreal 4 engine, Caged Element’s Grip takes Rollcage’s core mechanics and updates them for PS4 and the capabilities of current PCs. Although still in pre-Alpha Early Access, it’s clear what Grip is going for: speed, tension, skill, and a disorienting use of the environment.

In its present state, only two of the game’s eventual four planetary environments are available, only three tracks are playable and cars are not customizable beyond the cosmetics of color selection. Eventually, of course, the vehicles will have a huge variety of options around armor, weight, size and loadouts and new tracks and features will be added as the game progresses through its public development. 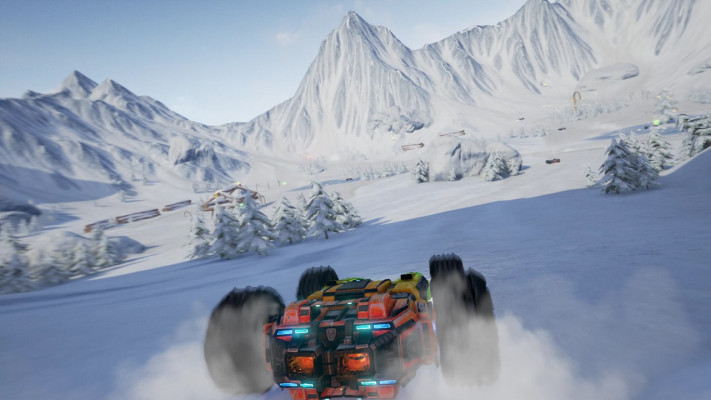 Grip is a vehicular combat game, so in the course of the races, players pick up weapons, shields, power ups, and all manner of ways to reign havoc on the success of the other racers. Diabolically, the pick-ups — each vehicle can equip two at a time — are rarely in easy places, but located on the edge of the track or on the walls or wedged in the narrow space between two walls. In Grip, both physics and the environment play huge roles in the races. Tracks alternate between open ground areas and tunnels in which there are concrete partitions that necessitate driving up walls or onto the ceiling to avoid, almost immediately inducing a unique disorientation. Mis-time a swerve and hit a wall or spin out and it’s pretty much race over, as trying to back up on a curved, circular surface takes precious time. Of course, flipping over mid-jump and landing “upside down” is not a problem in Grip as the vehicles are double sided and just keep going. But as the developers note, it’s usually necessary to make some course corrections midair and use that time aloft to one’s advantage.

The courses are relatively short but keeping in control of the vehicles — itself no easy task — while using the weapons, shields, and power ups makes for a pretty intense and frenetic experience. There isn’t much in the way of tweaks to vehicle handling in place and it will interesting to see how that changes the game.

While it isn’t optimized and there still bugs aplenty, Grip looks very nice and the races are a fluid blur through craggy mountains and bits of industrial infrastructure. This isn’t the kind of racing game where you have time to leisurely appreciate the environmental details — there aren’t a lot of them — but the two planets so far are nicely varied. Hopefully, there will be a wider range of track types as the game evolves and moves towards a 2016 retail release. 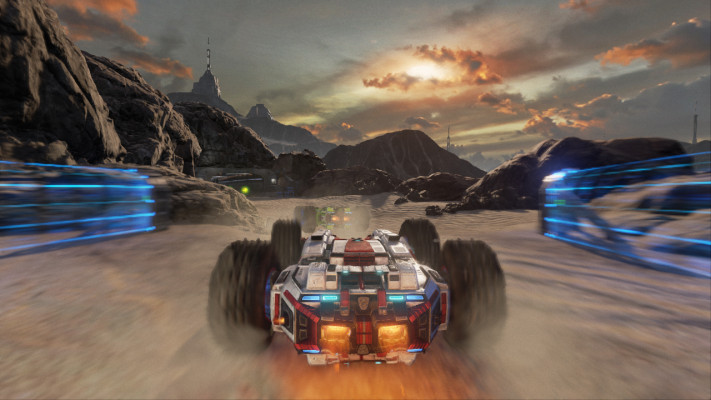 Grip’s music might just turn out to be one of the standout soundtracks of the year, with a varied team of artists — some of whom were involved with Rollcage Stage II — contributing to the techno, electronic, house and acid-influenced tunes. The music that’s already in the game is full of energy and matches the amped up tone of the races perfectly.

Though Grip isn’t a hardcore racing sim like Forza, it’s still a game that requires skill, patience, practice and knowing the tracks and the physics of the cars and world. There are lots of futuristic racing combat games in the Wipeout genre, but Grip has its wheels firmly on the track so at least some of the physics of the real world still apply. Grip is still early in development but racing fans — and especially anyone who fondly remembers Rollcage — should keep an eye on it or give it a try.