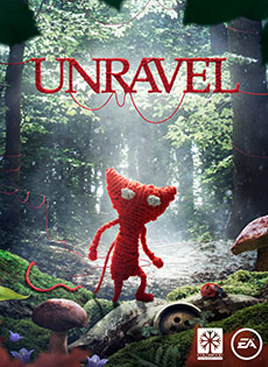 The majority of games we play, we play for enjoyment. How that enjoyment is derived is reflected in the game’s genre and our own personal approach. Many games put us in the shoes of characters that are capable of spectacular feats far beyond our real life abilities, other games immerse us with their stories or put us in the shoes of great heroes as they pursue grand causes and accomplish vast goals. Sometimes, games delve deeper, making us solve puzzles and struggle through adversity. Rarely,  a game takes an even deeper route, plumbing the depth of human interaction, feelings and emotion. Unravel manages to take something from all of these depths and creates something all its own. Telling the story of the most unlikely of heroes, Unravel follows the path of Yarny, a tiny figure only a few inches tall. For better or for worse, Yarny is made entirely of Yarn. The world is suddenly larger than life. Furniture towers over your tiny character and ordinarily small objects become impassable obstacles. Yet, even from this shrunken perspective, or perhaps because of it, the world is still beautiful. Seemingly mundane environments are rendered spectacular, while formerly spectacular environments become almost incomprehensible and irrelevant.

As you play Unravel, you might smile as Yarny ventures through his newly discovered world. You might grin as he chases butterflies, you may laugh as he pulls an empty soda can onto his own head, you could even be uplifted alongside him as he rides the wind with no clear goal in sight. If you’ve seen anything of Unravel leading up to its release, these are all things that you’ll be expecting. What you might not realize is that Unravel is more than what you’ve seen. Alongside these expected feelings, the subtle and unspoken narrative might leave you thoughtful. You might become melancholy at Unravel’s careful commentary on pain and loss. You might even weep as the game confronts the passing of time and the irrevocability of life. 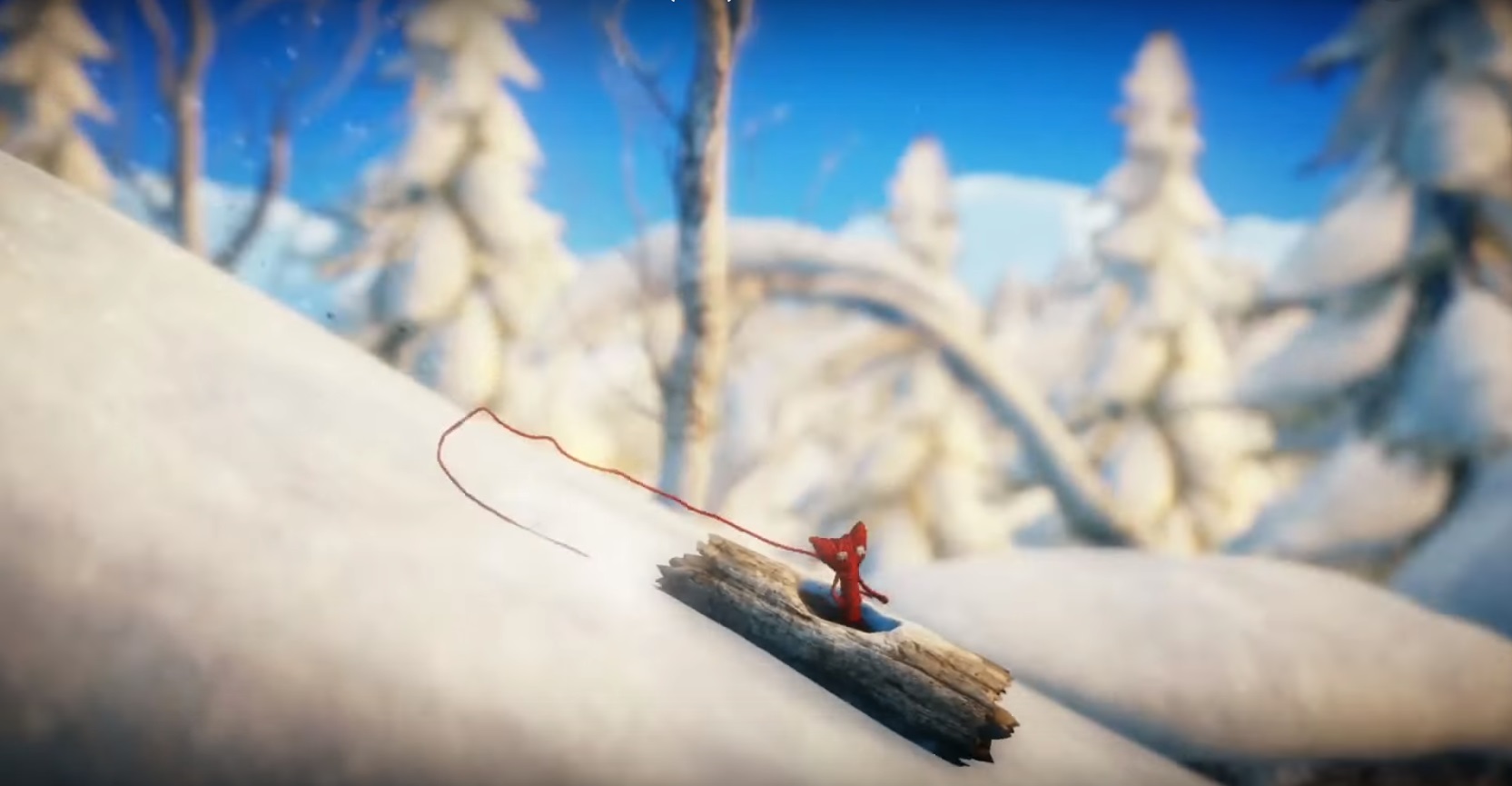 Something spectacular about the aforementioned narrative of Unravel is that it is so open to be interpreted in a myriad of ways. Every single person that plays it will be able to relate to its themes in their own, deeply personal manner. It’s rare a game can be so poignant and relatable by such a variation of people. Everyone will take something just a bit different from it. The simplicity of the storytelling is what allows this. With not a word spoken, the actual narrative is relatively bare. The only real direction comes from the initial scene of Yarny’s introduction. From that moment onward, the only guidance given is a few scant lines of text and blurry images showing memories of people and times past that are displayed and collected by Yarny as he travels onward through the environment. It’s this simplicity that allows us to place our own experiences and emotions neatly on top of the game’s direction and themes. Not that the game conforms completely to those playing it, quite the opposite. Unravel tells its own story, however, it is one that is so relatable, so universal, that it enables the player to empathize almost completely.

It’s easy to wax lyrical about the themes and narrative of Unravel but we can’t forget the game that is in there. As previously stated, the player takes control of a tiny yarn figure. Almost immediately, the character’s size translates into the gameplay. A table is a suddenly a large plateau, a dresser a mountain to climb, a door knob far out of reach by conventional means. Luckily, Yarny has a trick that can be used to traverse these challenging obstacles. He has the ability to emulate Spider-man’s web, except with yarn. As Yarny moves through the initial cottage and the subsequent levels that are based in the Swedish countryside, this ability has a heavily influence on Yarny’s interaction with the environment around him. The yarn can be used to swing from objects, build bridges, tie objects together and can even form a trampoline to launch off. This mechanic is the crux of the gameplay, with the majority of platforming and puzzles being completely reliant on its use. A unique aspect of using yarn as a mechanic is the ability to tie knots to objects. These knots, along with other uses, can be utilized as kind of safety ropes, or mini save points. For example, if a platforming section requires a series of jumping and swinging over a drop, the player can tie a knot on any relevant object, giving themselves a solid point that will stop them falling to an unfortunate end. 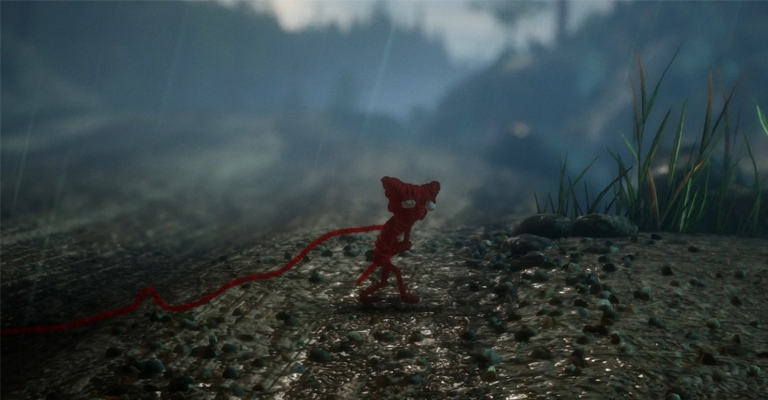 Alongside the yarn mechanic is a deep focus on physics. Thankfully, the physics aspect of Unravel is strong, even outstanding. Everything in the environment reacts exactly as you would expect when interacted with. Throughout our time with the game, we didn’t notice a single physics related bug or mishap.

The combination of the impeccable physics and somewhat unique yarn mechanics makes for an interesting variety of puzzles. This is the case for the majority of the game. We did, however, notice the repetition of the puzzle’s not being big enough to get to a ledge and having to return to a previously unnoticed item to drag/push to the relevant spot so as to climb up and continue. While this wasn’t a detriment to the experience, it feels like it is used a little bit too often when instead another method of gaining the necessary height could have been improvised to make the sequence more varied. Furthermore, there were a few times that we would see an object as we pass, push it along in front of us and find that that simple act had solved the puzzle for us, sometimes before we were even aware of said puzzle. These repeated aspects are surrounded by original and varying puzzle design, so any negative impact is minimal. While never becoming frustrating, the puzzles are sufficiently difficult to keep interest in the varying mechanics. The platforming aspect of Unravel also keeps the easier puzzles interesting.

Every puzzle in Unravel is constructed using naturally occurring objects from whatever environment the level is based in. There isn’t any occasion that a puzzle feels artificial or contrived. It feels less like a puzzle game and more like Yarny is simply trying to traverse the environment to reach his goal. That is a cool thing.

Both visual and sound design play a huge part of making the level design feel natural. It’s an area in which the game performs incredibly. The world is utterly beautiful, and the ambiance amazing to match. Whether Yarny is traipsing along the coastline or creeping through the mechanical pits of industry, it all feels completely authentic. Captured with incredibly detail, the huge variety of the Swedish environment is prominent in both sound and design. Vibrant colors of one level are offset by the subdued environments of another. Machines hiss and boom, Magpies chatter and water gurgles with startling clarity and authenticity. Often, we found ourselves completely enamored with these environments. Moving through them is a joy.

What isn’t a joy, is failure. Unravel steadily gets deeper, sadder and perhaps darker. Alongside this slow change is an increase in danger. The early levels possess small dangers, with early failures having scant consequences. As the game progresses, so does the harshness of failure. Instead of falling to the ground to get back up, Yarny is more likely to meet with more permanent ends. These hurt. Not Yarny, mind you, but the player. Somehow the many small deaths of a yarn figure had more of an emotional effect on us than many a character designed personally to represent ourselves in other games. We wince as Yarny sinks into the depths, is crushed, blown away and torn apart. While death simply means a quick restart at the nearest of regular checkpoints, we found ourselves taking great lengths to avoid it.

Exploring themes like love, environment, family and loss, Unravel has the potential to be an emotional undertaking for the player. It’s an experience that was quite intense for this particular reviewer. It is a wondrously constructed game born of love and culminating as an incredibly, beautifully bittersweet, emotional adventure. Filled with heart from its opening to the cessation of the credits, it will wow you, make you smile and make you cry. Gamer or not, you need to play Unravel.