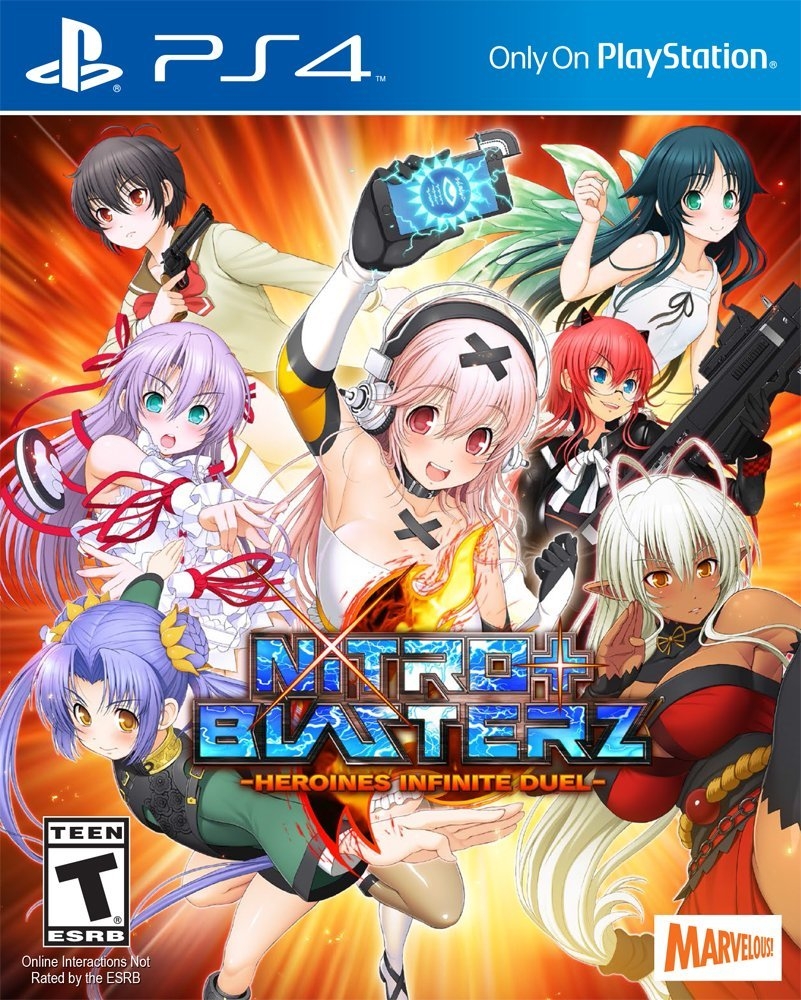 Nitroplus Blasterz: Heroines Infinite Duel is a fighting game starring the heroines of various visual novels, anime and manga published by Nitroplus throughout the previous years (along with two characters from the Senran Kagura and Arcana Heart games as currently free DLC). There is a plot involving a mysterious figure summoning characters from other dimensions and cell phones that drive people crazy, but that isn’t important. The important thing is that after immediately diving in and choosing Sonico as the first character to try out, I was able to smack a one-eyed girl flying around on a giant crucifix upside the head by swinging a housecat into her face with the push of a button. Jubilation occurred.

Yes, if there’s one thing that Nitroplus Blasterz has going for it right off of the bat, it’s that it has a lot of charm and personality. Each of the twelve characters has their own distinct style and personality, with attacks that range from whipping out chainsaws to turning into a giant spider, not to mention the impressive “Lethal Blaze” special moves that basically launch entire short anime sequences. And aside from our leading ladies, the game also has twenty support characters consisting of several other various Nitroplus characters who act as strikers that you can deploy at the push of a button when the appropriate meter is full, and who deliver a wide variety of attacks as well, including hang-gliding into any enemies with airborne attacks, producing a miasma that prevents enemies from jumping, as just plain tasering them. It’s a colorful selection that allows for a bit of strategy, and the fact that the game makes suggestions as to who might make the best support depending on your character’s fighting style is a particularly nice touch.

The visuals are also nice and colorful as well, with some particularly lovely sprite work showing off each character perfectly, and with good animation to boot. The music is also a gleefully energetic blend of j-rock-ish tunes that contribute to the action well. The only part of the aesthetic that sadly kind of flops are the backgrounds in each stage. Aside from some parallax scrolling, nothing in them is animated, and nothing else populates them, leading to some awkwardly lifeless battlegrounds where you can see the twinkles on a chandelier that never move an inch. They work will as still images, but that’s about it. 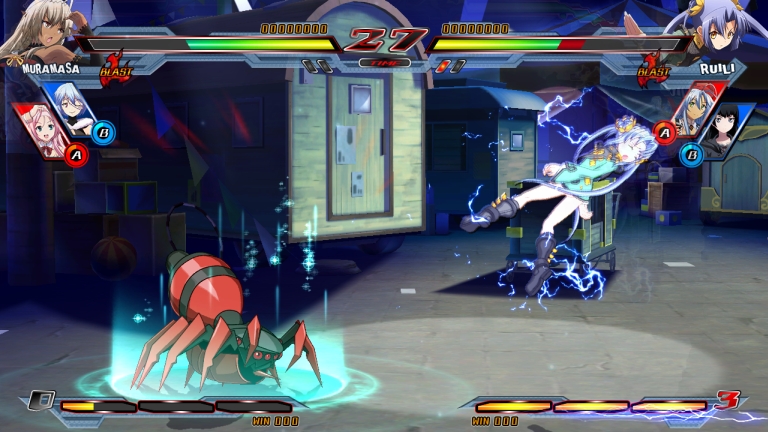 But the actual fighting which goes on in those stages is the most important aspect of the game, and thankfully the gameplay is nicely solid. I admit that I’m not that particularly skilled when it comes to fighting games, if only because I have difficulty executing the more complex moves, but thankfully Nitroplus Blasterz is just as accessible to rookies and pros alike (well, at least until you get to the final boss of the story mode, who presents what feels like a rather hefty difficulty spike). Combos are rather easy to pull off, and the various special techniques you can use for evasion and defense are easily executable and nice to experiment with as well. All of the characters also control quite well, and anyone who’s ever played a fighter before should have no difficulty easing into things.

Of course, one of the reasons those familiar with fighting games here should have no problem getting into the swim of things is also the only real flaw of Nitroplus Blasterz, in that it really doesn’t do that much to differentiate itself from other games in the genre. There is the unlockable “Another Story” mode, which adds a visual novel to help expand the story further, but aside from that, you just have your standard training modes, score attacks, and online matchups. So unless you’re also a visual novel fan as well, it may feel like the game is a bit light on content, especially considering its cost. 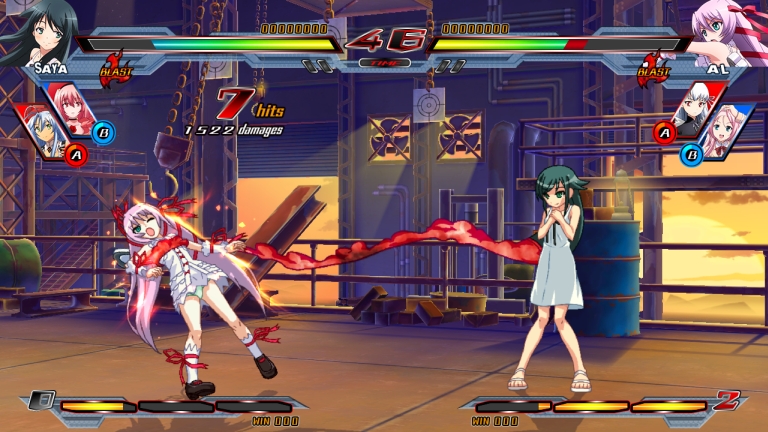 In the end, those who are more familiar with works of Nitroplus will get the most out of Nitroplus Blasterz (shockingly enough), but even those with no prior knowledge of the included franchises should easily be able to enjoy it. Despite slightly lacking in the innovation department, what we have here is still an extremely solid fighter at its core, one with a nicely offbeat atmosphere and some great, inclusive gameplay that anyone can get into, so the end result is a fun 2D brawler perfect for rabid fans and noobs alike. Also, you get to smack people upside the head with a cat. So there’s that.