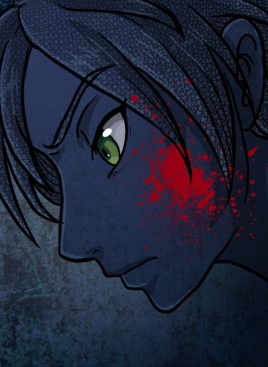 Visual novels are a gaming genre that cover all sorts of themes beyond just that of romance. No matter how many times I say that, though, the old stereotype that all visual novels are samey dating sims persists. If you somehow still hold that belief, then all you really need to do is play Sickness to have that mindset stripped almost immediately. In Sickness, things start off on a dark note from the opening scene. The first thing we’re greeted with is the image of a man, bloodied and lifeless on the floor. We’re quickly given the context — a young man named Suoh worked for this person. On this day, his boss snidely refused to hand over his paycheck and our protagonist flew into a rage. He didn’t mean to actually kill him, but that was the end result regardless. As you can probably guess, things are off to a terrible start for Suoh.

In an incredibly fortunate twist of fate, his coworker also happens to be a fairly shady dude who is able to help dispose of the body with no issue. Because of this huge favor, however, Suoh is now on the hook for whatever this coworker wants him to do. So, what is on the plate now? It’s simple: our protagonist is forced into legally dubious jobs that grow worse and worse almost immediately. Most of us would probably be stressed and repulsed beyond belief but Suoh almost seems to take instantly to the life of crime. It seems he is suffering from a “sickness” the likes of which ensure that he’s poised for success in this brand new lifestyle. Sickness builds this concept up quickly so that players can jump right into the meat of the sinister storyline.

It’s not as if Suoh is just a total monster, though. Just as he is starting up his new path in life we’re also invited into his home. His young sister Sara reveals another side of her brother. In these instances, we see a wonderfully lovable sibling who cares deeply for the safety and happiness of his sister. At these times he seems immediately likeable, if a bit creepy on certain occasions. As any good brother out there, Suoh hopes to provide for her and keep her completely unaware of his criminal dealings. Predictably, this becomes more challenging with time and sets up an additional layer of drama on top of the existing crime storyline. That’s all the setup I’m going to give for Sickness because much of the “fun” is discovering the twists and turns for yourself. 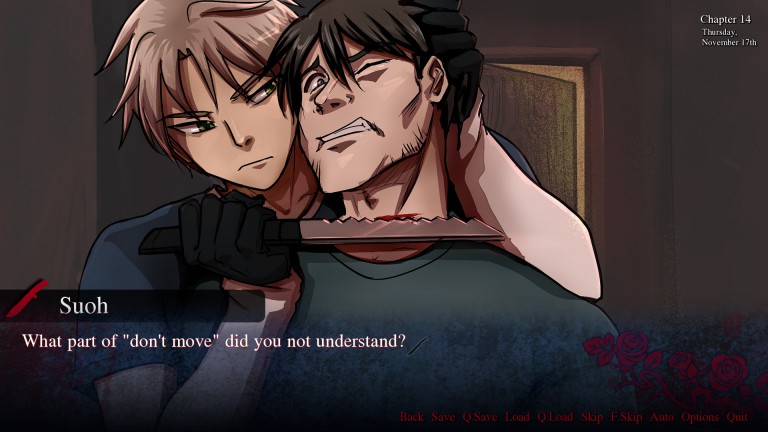 Part of what makes Sickness so effective is that the storyline does feel fairly unique in the visual novel space. Normally, a tale like this would be one where the protagonist was utterly terrified or unprepared for a dangerous new job. Suoh, however, takes to everything with ease and enjoyment. It’s disturbing to watch it all unfold as the reader knows this guy has a good heart… somewhere beneath the cold-blooded exterior. This fascination with the protagonist and all that’s going on around him makes for quite the enthralling tale. Sure, a lot of things are excessively dramatic, but it all works together well. Seeing meaningless, gratuitous violence perpetrated on people hits hard and it never really lets up. Perhaps some of that has to do with the fact that players are directly participating with it that it resonates so strongly.

This is thanks in large part to the writing as well as characterization of Suoh, Sara, and all those around them. As this is a game filled primarily with criminal types, you see a lot of personalities that are unlike most visual novel cast members. People are cruel and serious, but also have their own weird sense of humor. For the most part, these other characters don’t fall immediately into trope territory either. The writing is certainly not perfect, but it accomplishes its job well by keeping players invested in completing Sickness. Heck, there weren’t even many typos which is a huge surprise given the typical launch quality of most indie visual novels out there. The writing may not be the cream of the crop but it is definitely strong enough to get its point across in powerful ways. 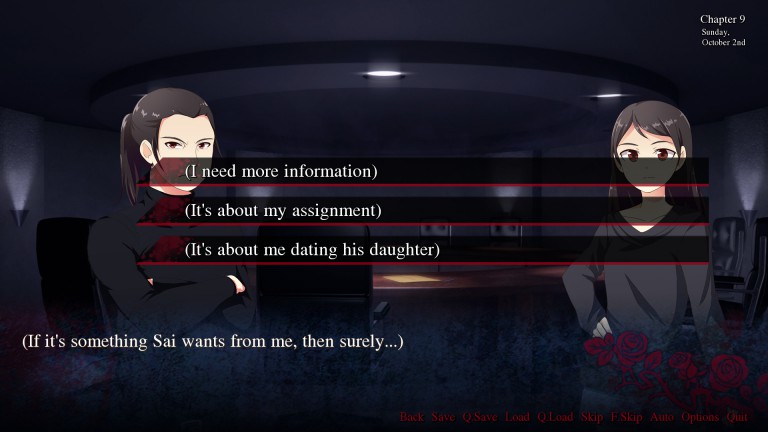 Players have many options to choose their destiny during their first four to six hour playthrough. There are tons of chances to control how Suoh speaks with others, as well as what actions he takes along the way. Many of these actions don’t outright appear like a big deal, but lead to one of two main endings. Both endings are worth viewing, and unfortunately it’s not obvious how to get the next once having finished Sickness once. Luckily, there is already a guide on the Steam Community for those not willing to guess on choices until they get there. Of course, there are bad endings as well which typically occur as the result of one poorly-planned move. If a choice seems important then it probably is — so create a save before selecting. It’s still worth seeing bad endings as they do offer up achievements.

Visually, Sickness does not have the most polished art out there but somehow it doesn’t matter. After seeing heinous crimes committed the somewhat unrefined art style hardly bothered me. In fact, the art carried a sense of frenzied excitement about it in these sequences that it almost seemed more appropriate than a glossier CG scene. That’s not to say everything was perfect about the visuals. It appears multiple artists (or styles) were employed, not all of which carry the same excellent effect. Then there was the music. While the soundtrack doesn’t contain all that many tracks, there are some seriously intense songs on there. They amp up scenes into the disturbing messes that they should be. It is a bit disappointing there’s no voice acting, but done poorly that could have ruined the entire balance created between soundtrack, visuals, and writing. 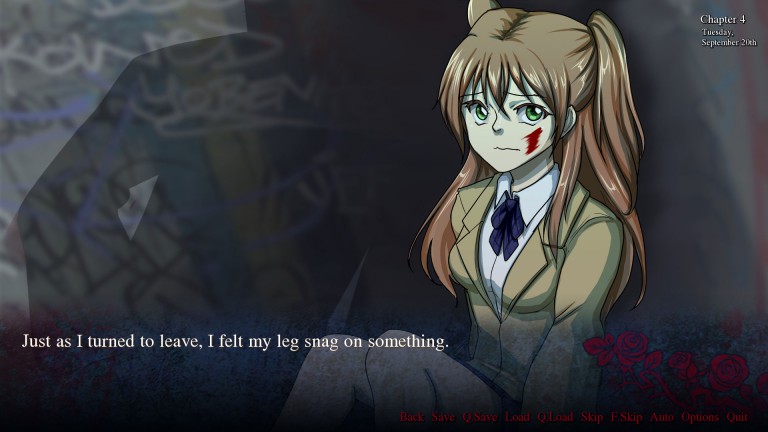 Sickness is not a visual novel for the faint of heart or those looking for a good, comedic romp with adorable anime characters. While you will find anime-style art, it is hardly attributed to anything adorable or sweet for long. The game takes players on a dark journey along with Suoh as he comes to terms with the sickness bubbling up inside him. This is a fascinating trip that falters slightly, but in general proves a worthwhile read. Those looking to change up their visual novel palate with something a bit more serious will get what they’re looking for here. Just be prepared for it to leave an impression on you with its intense writing and gory artwork.