People play a lot of Hearthstone; it’s a great game that’s easy to learn and hard to master, but the main reason fans find time to login every day is because it’s just so accessible. You can jump in and play a couple matches in a fifteen minute time period. You can play while waiting for your name to be called in the dentist’s office. You can have satisfying competitive bouts while eating a sandwich and watching a YouTube video. Albion Online gives off the same vibe and it’s going to be exciting to see what it eventually becomes. Hopefully gamers will soon be able to add a proper massively multiplayer role-playing game to these small and large pockets of their lives.

Before we dive into this preview of the closed beta, it’s important to be clear about what makes Albion Online special. It’s a PvP-driven sandbox MMO that can be played on your desktop PC, laptop or tablet. It’s as hardcore as you want it to be while still being playable with touch controls on the go. Sure, there are MMOs on tablet already, but they’re all more casual experiences that don’t stand up to their console counterparts. In fact, Albion Online claims to be the first truly cross-platform MMO experience thanks to their master server that everyone will play on no matter what device you login from. Regardless of whether or not you have an interest in MMOs, you should be paying attention to this game.

There’s too much handholding in the modern age of MMOs which is one of the first reasons Albion Online feels so refreshing. There’s no way to tell for sure, but after you finish creating a character it appears that you kind of just wash up on a shore. You control your avatar from a top-down perspective akin to Diablo which means that it’s impossible to look into the distance. You’ll explore the small area around you before a few quests pop up asking you to gather materials and craft some items. 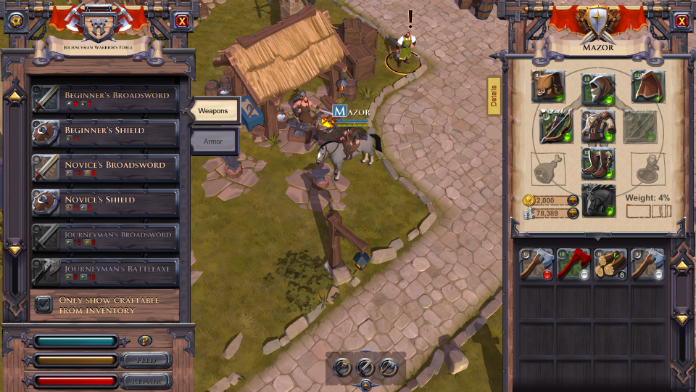 You’ll also notice that almost everything in Albion Online is a resource. The plants, rocks and wildlife can all be harvested.  Your adventure begins by cutting down trees and collecting stones to craft a sword and shield as well as some basic crafting tools. Surprisingly, you might find some of the trees are already depleted when you try to harvest from them. For example, you’ll come across a tree that didn’t quite recover from the last adventurer that chipped away at it and therefore won’t have the max available logs to gather. This teaches you the importance of finding a gathering spot relatively untouched by players.

Soon enough you’ll make your way to the first major city hub where there are players galore looking for groups to adventure with and guilds to join. You can grab a simple fetch quest and head out into the forest to start slaying wolves. There are dungeons located on the map, but it may bewilder you to realize none of the mobs drop items. It makes sense for wolves and wild boars not to drop any gear, but it’s a little strange that the humanoid Heretics wielding daggers and staves only offer currency for rewards.

The battle system is point and click with hotkeys for your abilities located on the right side of the screen. Knowing this game is being supported by tablets, it’s easy to briefly imagined yourself holding an iPad with your right pointer fingers and clicking the abilities with your thumb. This would leave your left hand to do all the navigation. If you play on PC with a multi-key mouse you’ll discover that after some hotkey allocation Albion Online can be played at a high proficiency level with just one hand. 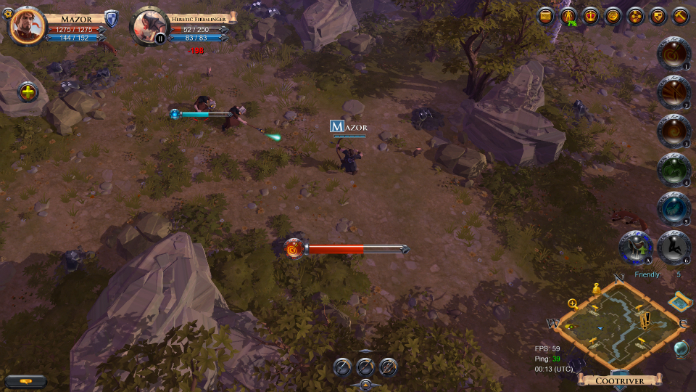 The characters in game auto-attack during battle with abilities being used in and out of cooldown. It’s not so different from other top-down action RPGs though there aren’t many with open world PvP like Albion Online.

The class system is radically different from what’s expected from MMOs. Instead of locking you into a specific role during character select, you’re given the freedom to change your class and abilities at any time. This solves a major problem in many RPGs. Now you don’t have to worry about picking a class you may not like twenty hours in. You can freely experiment with all the classes without starting a character from level 1 again.

On that note, Albion Online has basically done away with classes all together. You can equip any gear to any character as long as you have the skill unlocked. Feel free to mix and match your heavy armor with a bow and arrow. It’ll bring a smile to your face when watching an archetypical-tank looking character wielding a spell book and tossing fireballs moments later. It may even be possible to create a dual wielding shield character that strikes fear into her enemies as she runs onto the battlefield.

This brings us to the next vital piece of information regarding your character’s progression: all of your abilities are determined by your equipment. One of Albion Online’s mottos is “you are what you wear.” If you want to heal, then you need to craft a weapon with a healing ability attached to it. If you want to be able to turn invisible, then you need to craft a cloak that’ll hide you in the shadows. Another option would be to purchase these items from other players on the auction house. Let’s say you go this route and purchase a dagger from another player. When you try to equip certain weapons, such as a dagger, you’ll notice you don’t have the skill to do so yet. This is when the community in Albion Online will come in handy. Whenever you have a question, just ask in global chat; a more experienced player will quickly introduce you to the Destiny Board. 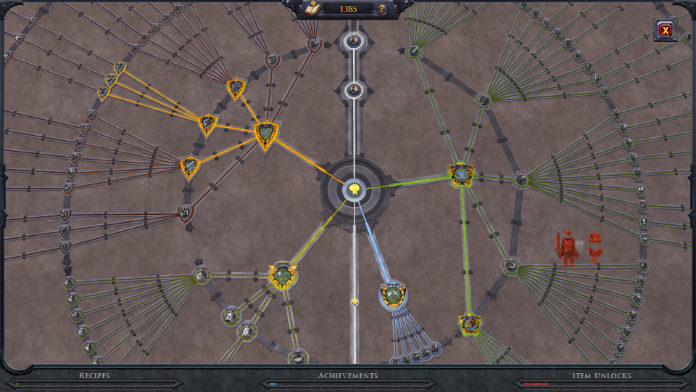 Basically, the Destiny Board is a skill tree for advanced crafting and equipment. Early on in the game your character can equip up to tier two of any gear sets or weapon loadouts. Turns out that daggers happen to be a tier four weapon so in order to wield one you’ll have to make your way to unlocking that tree on your Destiny Board. At first the Destiny Board can look overwhelming because it’s so expansive that it doesn’t even fit on a large monitor, but after studying it for a couple minutes it’s easy enough to understand. You have to become proficient with a tier three bow before you can unlock the skill to use daggers.

You’ll spend most of your time with Albion Online enjoying the freedom a sandbox MMO provides, but some of the annoyances that the sub-genre brings must be pointed out. For instance, there will come a time when your exploring a dungeon around your level and you end up getting attacked by more enemies than can be handled solo. When you die in Albion Online your items begin to break and before you know it, your gear will be useless and your character will be naked. The game gives you the option to resurrect where you die with invisibility or port back to the nearest city, but if you don’t have any gear there’s really only one choice. This results in all of your items laying on that dungeon floor with your dead body. This can be a serious problem after looking into how much money it costs to replace items such as a tier three horse. If you have any gear stored in your vault, then there’s still hope to equip a different set and venture back into the dungeon. It may take about thirty minutes to reach your corpse, but sure enough it’ll still be there for you to loot all your items back. You’ll have to spend some silver for repairs, but at least you’ll have redemption.

It’s a little upsetting to backtrack to a corpse in a dungeon, but the feeling of going back and making right where your character lost is a feeling not often experienced in online games since Everquest. There will certainly be people who may not enjoy the sandbox elements of Albion Online, but for some it will be the sole reason they play it. The possibilities in this game are certainly intriguing and it’ll be exciting to see what the community unravels.

Whether adventuring solo while watching YouTube videos in the background or spending an afternoon grinding with friends for the best rewards, Albion Online can be played both casually, hardcore or somewhere in between. Hopefully the sandbox part of the game will allow you to choose exactly how you want to play.

Albion Online is currently in closed beta which can be accessed by purchasing a founder’s pack from their website. The game is set to launch in 2016 on PCs and Tablets supported by Windows, Mac, Linux or Android. 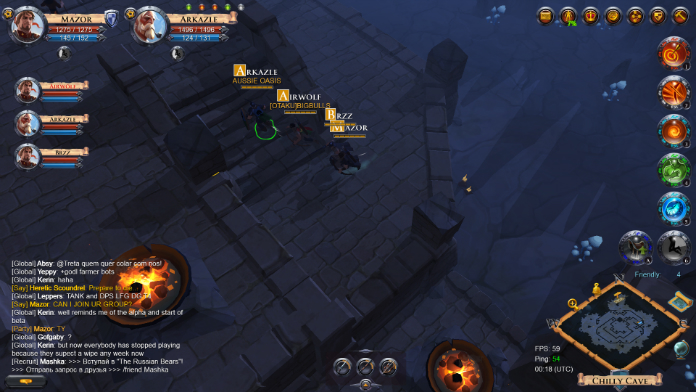