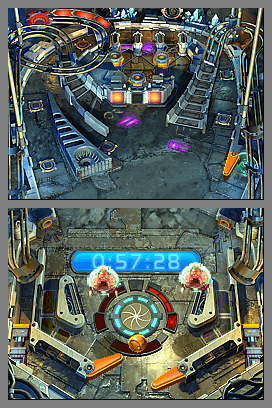 In a weird way, this one made perfect sense. Samus, of Metroid fame, is known for rolling in a ball to get through tight spaces. It is said that her birth was the easiest for any mother ever for this reason. Americans still have an affinity for pinball. Metroid tends to only succeed in the west. Jamming the two together to create a bumper and board game would be like peanut butter and chocolate. This thinking led to Silverball Studios’ underrated classic from the early DS lifespan that still holds up today, Metroid Prime Pinball.

The plot of this game was about what one would expect. There are metroids. Samus must exterminate them. Inititally taking place on the player’s choice of two tables, Pirate Frigate and Talon Overworld, the player is tasked with taking down wandering enemies and completing missions using skilled shots of the ball. These actually became quite challenging as not only did the player need to quickly calculate the angle of the paddle hit to hit a ramp, but they were also required to plan for the path of the foes. These could render the shot failed as it careens into an enemy and bounces into the damn bumpers again. Fotunately, it is also possible to steer Samus’ path using the touchscreen to make things a tad easier.

There are numerous aspects that keep this title from becoming too frustrating. The board layouts are absolutely brilliant. There are tons of ramps, bumpers, spinners, and targets to hit. Each board is packed with things to do and goals to achieve. Samus also has her trademark wall jump ability that gives this pinball title a flavor of its own. There are also a boatload of minigames to partake in. 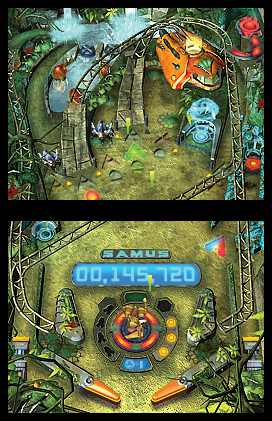 While there are two well done tables at the start, more can be unlocked via play. The two easiest to reach, Phendrana Drifts and Phazon Mines, continues the trend of quality. During play, the Phazon mines quickly became a personal favorite with the blue and yellow hues and the deceptively simple layout that hid a surprising amount of depth. There are two more tables as well, though I was never able to personally reach these. By collecting twelve artifacts, the player can go to the artifact temple. Here, twelve targets must be hit while Meta Ripley rains hell upon the player. Succeeding here unlocked the final table, Impact Crater. Here, the player is tasked with defeating the Metroid. Apparently, winning here unlocks an expert difficulty.

Again, I was unable to see these final two, and that is because of two reasons. One, despite my love of it, I am terrible at pinball. The second is because of the score attack mode. Naturally, the player selects one board and proceeds to rack up as high of a tally as possible. With the added moves that Samus had combined with the old-school one board mentality, this is where I spent the bulk of my time with this title. I loved challenging myself to reach lofty heights in score and then try to beat it. Eating up hours at a time, this simple mode was addicting in the way only pinball can be.

There are only two real downfalls to this title; the first can be the most infuriating. The board fills both the top and bottom screen of the DS. This is a logical progression of keeping the classic aspect ratio of regular pinball. However, the two screens are not perfectly touch, so there is a “dead zone” between the two. While rare, there are times where this dead zone leads to lost balls and missed shots. What seems like a perfect attempt can skew off in this mystical space. 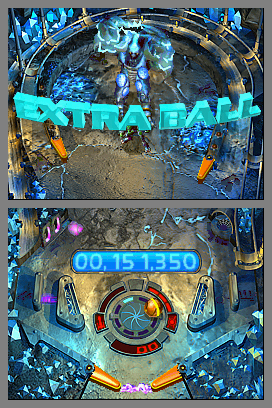 There is also the matter of what was to be a bonus feature that brought this title to the next level of immersion. When first opening a new copy of this gem, the owner is greeted with both the game card as well as an extra peripheral, the rumble pack. This cart is designed to tuck into the DS’ GBA slot with the intention of granting force feedback to the player. In practice, it seems only to make a strange buzzing sound and cause one to fear for the health of the system itself. Fortunately, this added feature is not required for enjoying the game and can easily be placed back into the case for collector purposes only.

This is fortunate, as it seems to be rare to be able to pick up a copy with the rumble pack included. Based on personal experience, it seems that most people either lost or trashed this novelty after testing it out. While the game card itself can be easily found on the cheap, I have never seen a complete copy in the wild outside of when the title was new. As stated, though, this does not hamper the enjoyment of this outstanding pinball game. Its diverse tables and oodles of extras make Metroid Prime Pinball an enjoyable experience for pinball and Nintendo fans alike. The fact that it can stand strong for series fans and genre aficionados alike make this card a must own for anyone with a Nintendo DS. And it’s a darn sight better than Crue Ball.