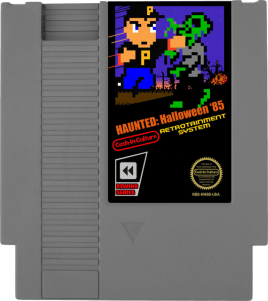 After a 21 year drought of new games for the Nintendo Entertainment System, Retrotainment released Haunted: Halloween ‘85.  This 2D platformer looks, sounds and plays like it came straight out of the 1980s.  Unlike other indie games that are simply an homage to games from that era, this title is available for purchase in NES game cartridge format and can be played on a working NES, along with the currently available unlicensed retro consoles. Those of who do not happen to have a working thirty-year-old console do not have to feel excluded, as this game is currently in Steam Greenlight awaiting approval for PC port on Steam.

While there is no shortage of games that center around a zombie uprising, this one could possibly have the most innocent backdrop for the undead feasting on the flesh of the living.  The story begins when ten-year-old Donny wakes up late for school and subsequently misses the bus.  Under normal circumstances this would be valid justification for missing school, but today is the Halloween Dance.  If Donny misses school, he will not be able to attend the dance and will miss out on this golden opportunity to hold Tami’s hand.

Being the crafty kid he is, Donny decides to hoof it to school and sneak into his last period class, hoping his teacher will be none the wiser that he was only present for roughly 10% of the school day.  His nefarious scheme seems to go off without a hitch and Tami’s hand is literally and figuratively within his grasp so that their prepubescent love may blossom.  Of course, this plan could not go off without something mucking it up, otherwise there would be no game. 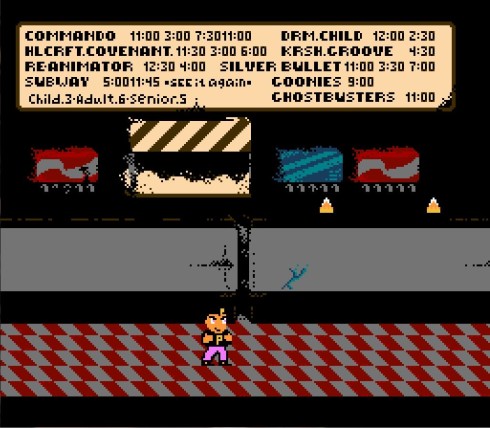 Upon arriving at school things seem as if something is not quite right.  The students and teachers are nowhere to be seen, and aggressive zombies are on the prowl.  There are also mysterious bottomless pits, suspended platforms, and levitating books. One has to remember this is an 8-bit Nintendo game, so none of those things should seem out of the ordinary.  Nor should a ten-year-old boy punching out zombies while traversing his school, the mall and other locations with no other non-zombified human adults in sight.

The burning question with this game is how well does it stand on its own merits once the novelty factor of a new NES game is taken out of the equation?  The answer is surprisingly well.  The generation of gamers who cut their teeth on Hollywood quality CGI cutscenes and voice chat over online multiplayer may not grasp the appeal of a throwback title such as this.  Those who appreciate old school relic would not say this tops the classics like Super Mario Bros. 3 or Castlevania. That isn’t to say that this new offering doesn’t hold its own among the wealth of good titles from the 8-bit era.   It is apparent from playing the game that its creators are big fans of the NES and put effort into creating something other fans could appreciate and enjoy. 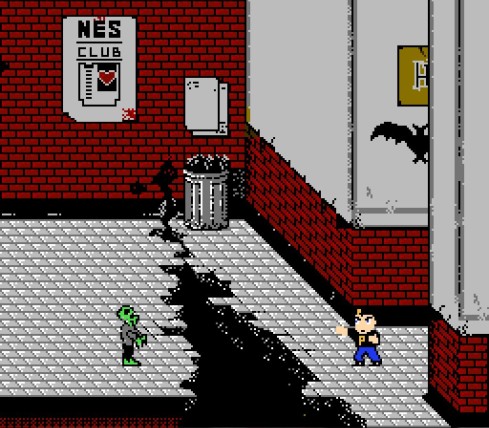 The game is challenging, but not unfairly so.  Most people proficient with 2D platformers should be able to complete this game after a few attempts, though multiple difficulty levels do increase the challenge if anyone thinks the default setting is too easy.  In addition to the zombies there are other dangers that are encountered, such as dive bombing creatures that Donny has to nimbly dodge, and poisoning jumping pumpkins that require some dexterity and precision timing to safely avoid.

The controls, though very simple by today’s standards, are responsive and smooth.  Naturally, this game adheres to the unofficial rule of NES that was rarely deviated from, A jumps, B attacks.  Instead of a traditional health bar Donny becomes a shade paler whenever he takes damage, until his skin reaches the healthy emerald tone of a spinach leaf and he joins the legion of the walking dead.  Going back to an earlier point about how the creators took care into making something old school gamers can appreciate, there are numerous nods to 1985 culture, one of the more obvious ones being in the mall level at the movie theater. 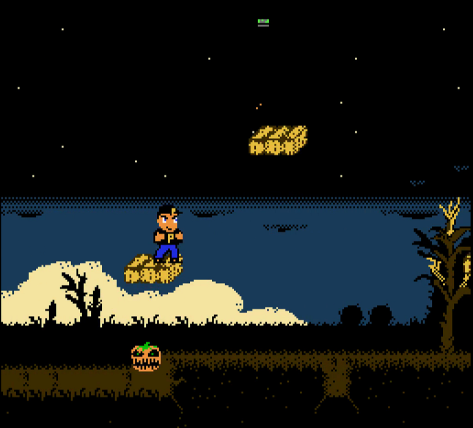 Haunted: Halloween ’85 is a solid game for intentionally being what would be a cutting edge title 30 years ago.  It is doubtful that it will convert people who only play modern games, but this one is worth playing for those who enjoy the classics even after the novelty of a new 2015 NES game wears off.