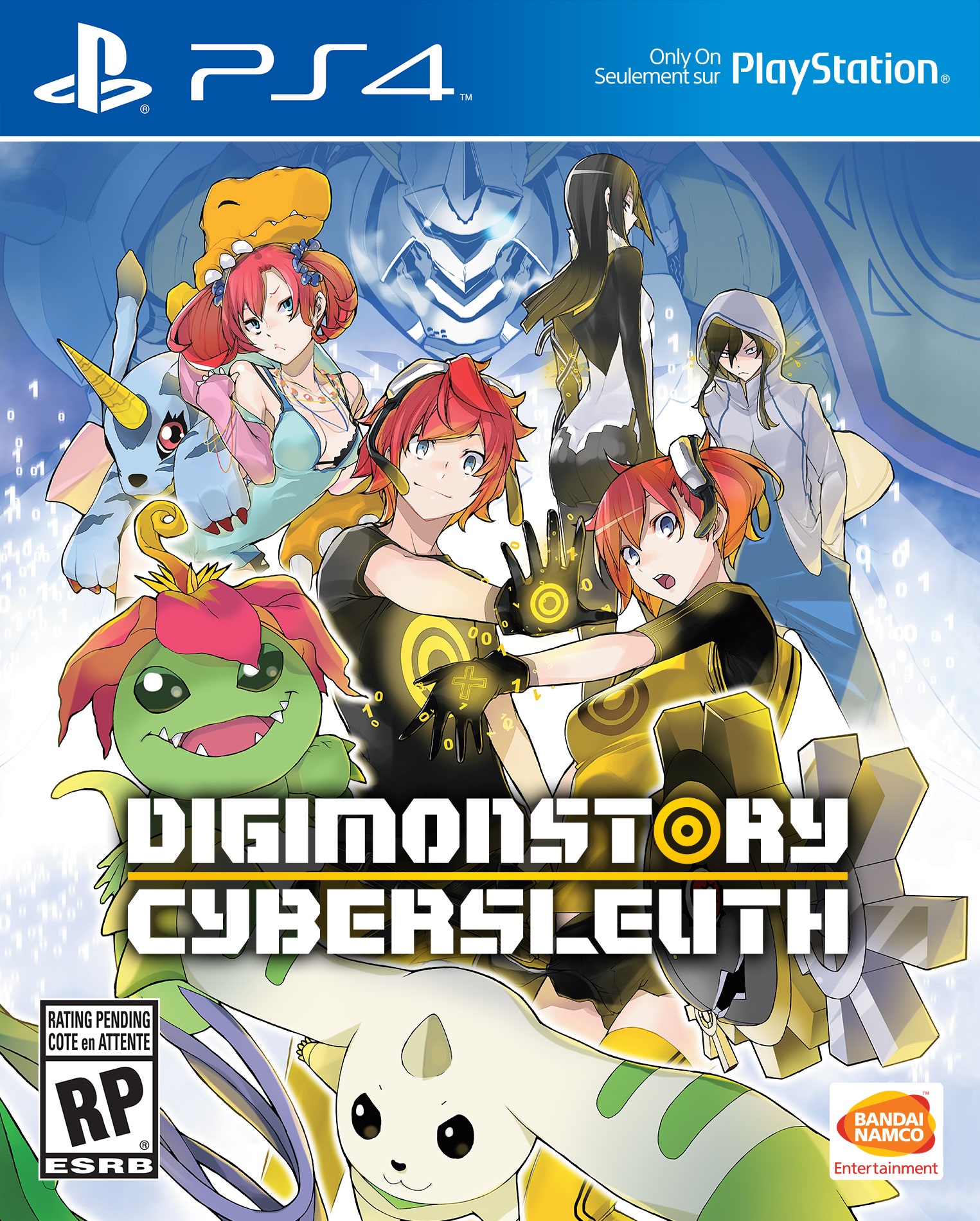 Digimon has never had much luck in the video game space. Despite spawning a successful TV series and trading card game, the franchise has never successfully transitioned into a good video game. That’s not to say that publisher Bandai Nacmo hasn’t tried, pumping out different Digimon titles over the previous three-generations. Now, developer Media. Vision has stepped up to develop the latest attempt at a Digimon game, Digimon Story: Cyber Sleuth. As a blend of Pokémon and Persona, is Digimon Story: Cyber Sleuth the Digimon game fans have waited decades for?

In Digimon Story: Cyber Sleuth, players take on the role of Tatsumi or Ami, male and female cardboard cutouts that serve as the main protagonist. After meeting up with some friends in EDEN, the game’s digital world, players are thrust into a series mysteries involving different hacker groups, a coma-inducing illness known as EDEN Syndrome and the dealings of Kamishiro Enterprises, the creator of EDEN. Of course, Digimon are pulled into the picture, though their role in the events remain shrouded in mystery.

The Digimon TV show proved that the franchise could tell fascinating, mature stories all while incorporating lighthearted elements. Cyber Sleuth’s main story is similar, weaving in mature elements all while incorporating some lighthearted moments. It’s fascinating watching the main story come together and the mysteries unravel. Unfortunately, there’s a lot of side story to slog through. Oftentimes, players will be sent on tasks that ultimately have little to do with main plot and serve only to pad out the game. For example, a main quest in Cyber Sleuth tasks players with eating at different restaurants and rating them. It’s silly and does not advance the plot. The characters of Cyber Sleuth range from well developed to downright ridiculous. There are characters like Arata and Yuuko who have strong character arcs, but others like Suedou and Nokia have over-the-top personalities that are absolutely cringe-worthy. It doesn’t help that this is an English-dub of a Japanese game. The script sometimes veers towards over-the-top silly and can be difficult to swallow. The dub isn’t perfect with grammatical and spelling errors popping up time-to-time, but not so often that the game is illegible. 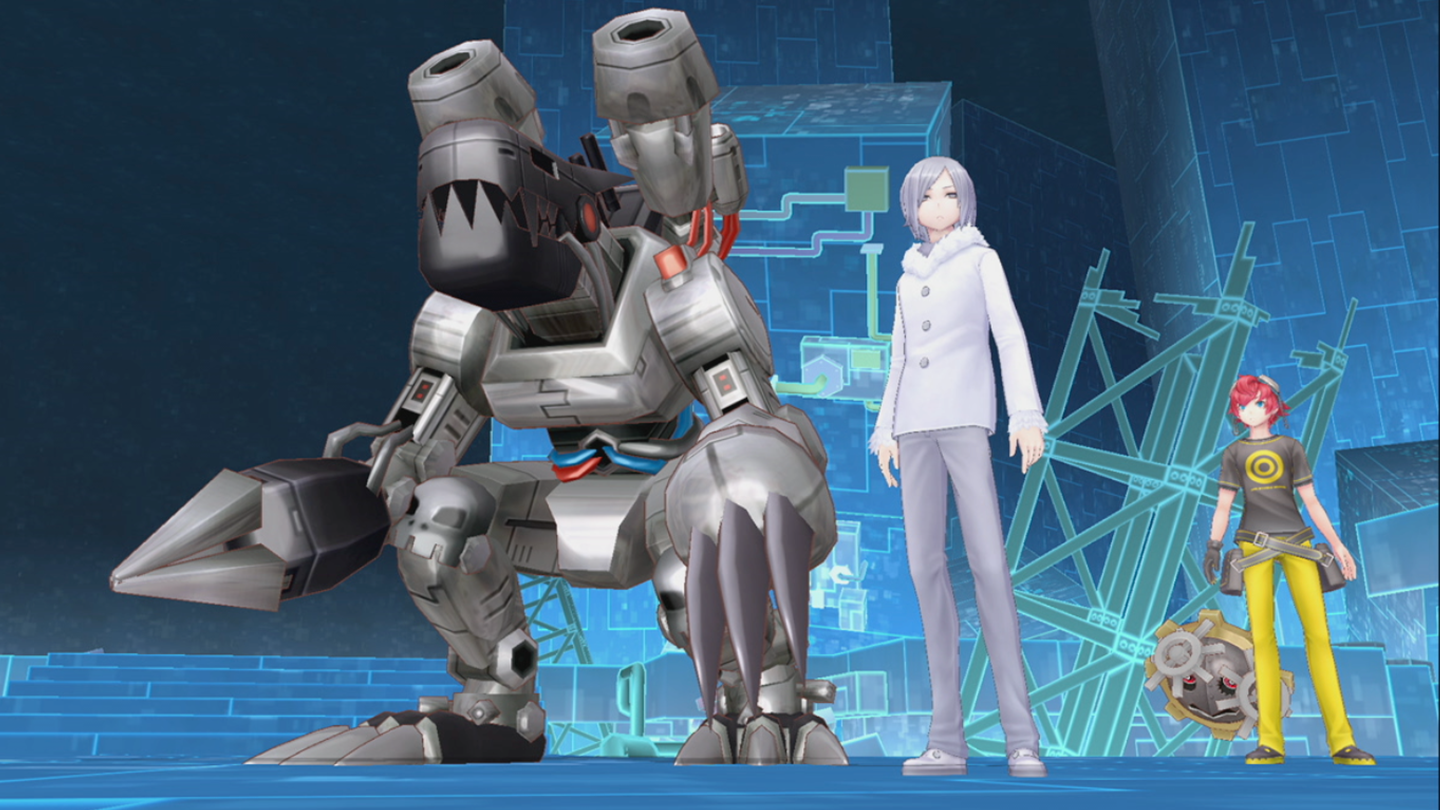 Cyber Sleuth’s story is a mixed bag. The overall narrative is strong, mixing mature elements with light-heartedness that evokes the TV show. Unfortunately, there’s some unnecessary missions to get through and a few cringe-worthy characters players will meet. Thankfully, Cyber Sleuth’s game mechanics are excellent.

Digimon Story operates similarly to most turn-based RPGs. Players can have up to three Digimon on the field at once, a bar on the right of the screen displays Digimon’s attack order and the player gives their Digimon an order. They can attack, use skills, swap places with reserve Digimon, guard and escape from encounters. Similar to Pokémon, Cyber Sleuth uses an elemental counter-balancing system. Vaccine Digimon are strong against Virus, which are strong against Data. On top of this are elemental weakness where an element like electricity is strong against water. It’s a simple gameplay system that can be nearly as addicting as Pokémon’s combat. 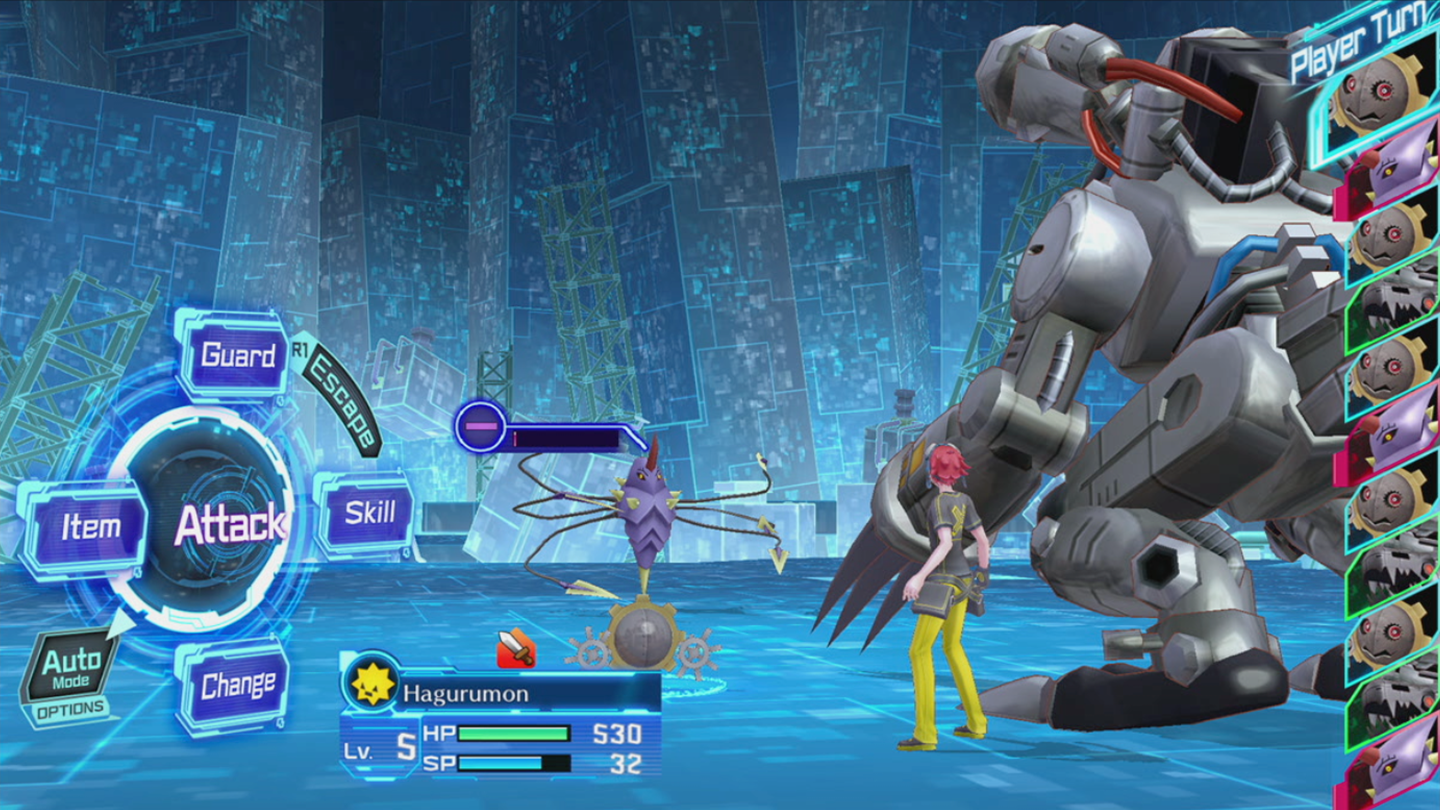 How your Digimon grow is as dependent by what you down on the battlefield as what you do off it. Players will have to make frequent trips to the Digilab, a requirement to grow your Digimon through Digivolution. There are nearly 250 Digimon in Cyber Sleuth, and Digivolution is the best way to acquire them all. Players also have access to the DigiFarm, a simulator where you can feed your Digimon to boos their stats, and even send them on passive time-oriented tasks. These can affect Digimon’s stats, and even change their assigned behavior.

Combat and growing Digimon is a blast, and there are hours of content in Cyber Sleuth. It’s a pity that the game never puts players in interesting settings to battle in. Dungeons are often reused over and over again, and all of them use identical assets. Aside from the occasional branching path that leads to a secret treasure, Cyber Sleuth never really opens up, nor will players get to explore the lush and beautiful Digital World showcased in the TV show. Even the real-world locations, which are modeled after locales in Japan, feel lifeless and merely serve as window-dressing. Considering how great the combat is, it’s a bit disappointing we aren’t given more interesting environments to run around in. 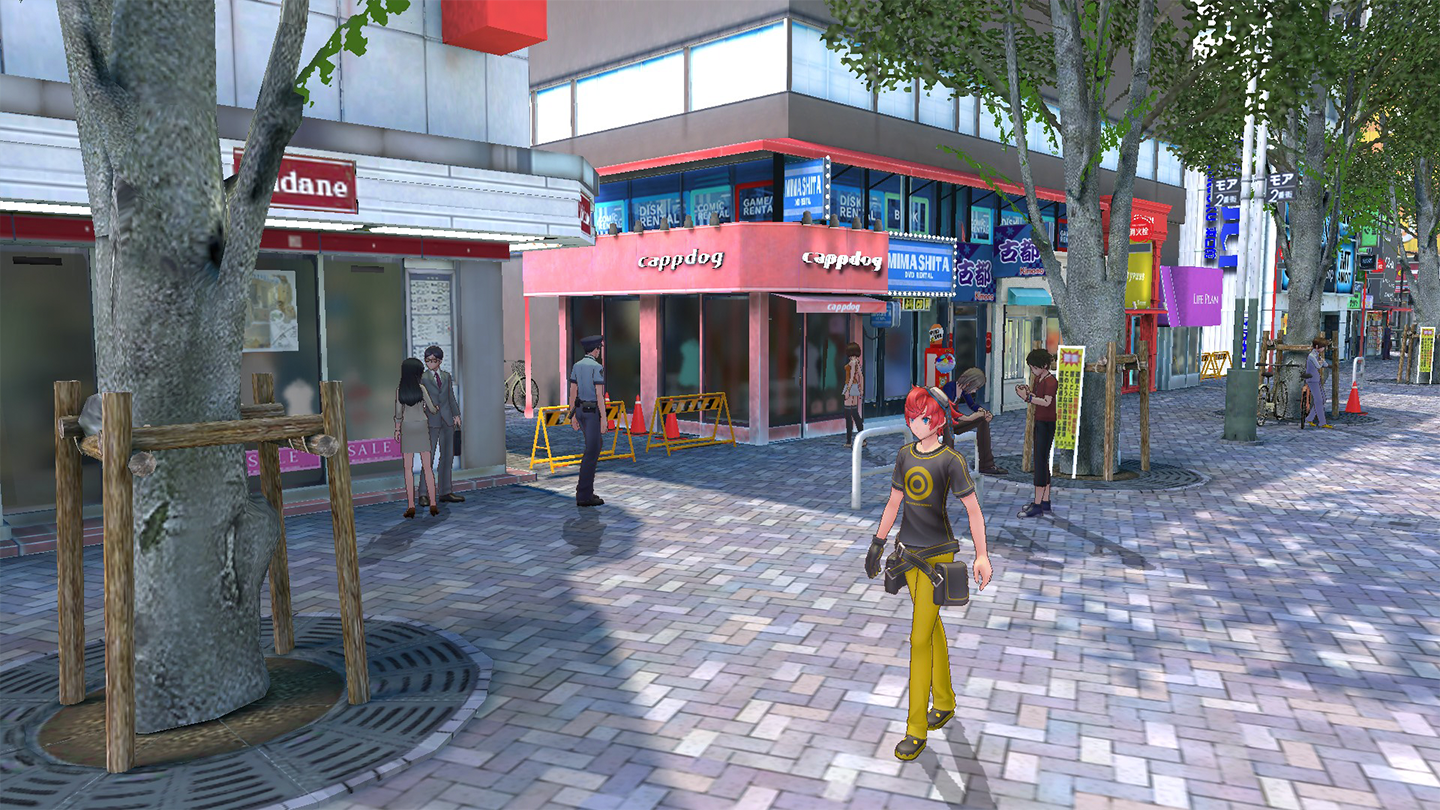 Digimon Story: Cyber Sleuth looks fantastic on the PS Vita. Suzuhito Yasuda, the man behind the designs Durarara!!, Shin Megami Tensei: Devil Survivor and Yozakura Quartet, was in charge of the art design for Cyber Sleuth, and has done a smashing job. EDEN’s use of whites contrasts beautifully with Kowloon’s use of blue. It’s a beautiful game to look at when inside the digital space. The real world is pleasant enough, though the game does suffer from some slowdown in areas with trees.

It’s the Digimon that really sell the experience. The team has faithfully recreated each and every Digimon to appear just like they did in the TV show. It’s a stunning achievement that shows off the levels of graphical fidelity the PS Vita can achieve. Seeing a WarGrowlmon tower over your character in battle is mesmerizing. 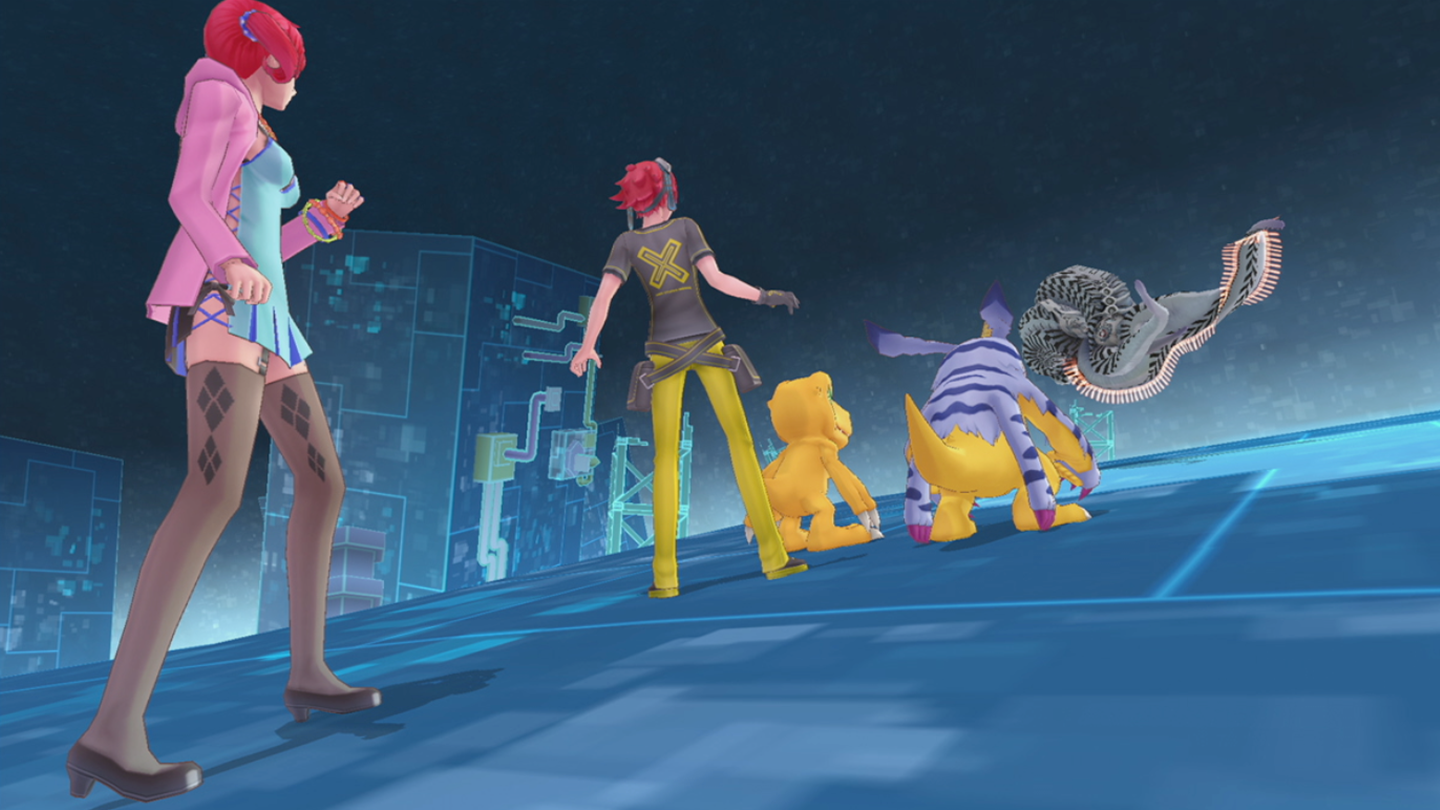 Establishing a solid foundation for which to build a successful franchise on, Digimon Story: Cyber Sleuth does for Digimon what Pokémon Red/Blue did for Pokémon. It isn’t perfect; its story and script could use some fine-tuning, and the world needs to be more interesting, but overall, this is a solid first step. The turn-based RPG mechanics are simple and addicting, while the Digivolution progression system is sure to keep players hooked as they attempt to capture every single available Digimon. The game looks fantastic and feels like it was designed specifically for the PS Vita. Capturing the essence of what Digimon is, Cyber Sleuth is the Digimon game fans have been waiting for.