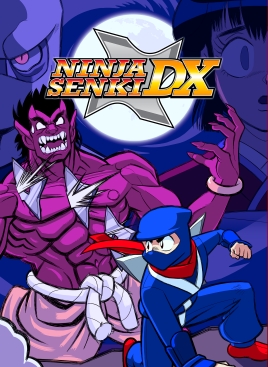 For the past five-plus years, Tribute Games has been producing high-quality indie games that act as tribute to the great 8-bit and 16-bit games of our youth. First there was Wizorb, a unique pinball game blended in with RPG elements. After that, we had Mercenary Kings, an ode to the likes of Metal Slug, and last year gave us Curses ‘N Chaos, a nod to the like of old-school single-screen arcade games. Now they’ve returned to their retro-inspired roots with Ninja Senki DX, an upgraded version of their original Ninja Senki freeware game, and the results are…well, let’s just say that there’s a limit on how far back to basics you can go without repercussions.

Ninja Senki DX is the story of Hayate, a ninja out for revenge after his beloved Princess Kinuhime is slain by a demon. But of course, that’s just an excuse to plop you into some ’80s Mega Man-style platforming action. As Hayate, you can double-jump, shoot shurikens, and…um…actually, that’s as deep as the gameplay gets. Yeah. No multiple weapons to choose from, no variety of tactics, not even any health pick-ups or extra lives to grab (although they can be earned). The closest this game gets to anything advanced is when you can skip across water, and even then it’s used for only one level and never given any hints on how to successfully pull it off.

Now, I wouldn’t mind simplistic gameplay like this, and the game definitely controls nicely like the best games of old, but Ninja Senki DX doesn’t really bring anything else to the table aside from basic platforming. There are end-of-level awards for either collecting all of the coins or defeating all of the enemies in a level, and multiple endings to lengthen replay value a bit, but the core game just couldn’t get me excited enough to aim for all of them. For that matter, there were some moments where collecting all of the coins in a level on one go was impossible, and at least one moment where the enemy’s AI caused them to leap down a bottomless pit, robbing me of those awards. 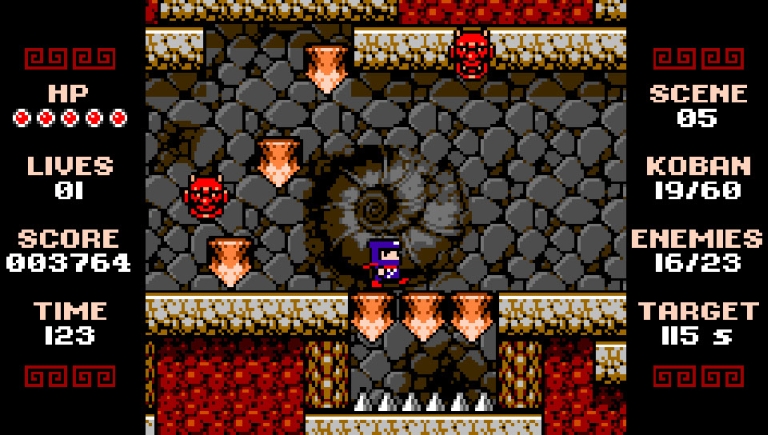 But getting back to the lack of excitement, where Ninja Senki DX stumbles particularly hard is in the area of level design. Aside from the occasional slightly inspired secret area, they’re just dull, with no real variety of challenges. The enemy types you run into are ones you’ve seen in countless games before this one, and rarely have any variety of attacks other than running/floating around or shooting a single projectile. It gets particularly egregious when the game blatantly creates a series of obstacles simply by cut and pasting three to five of them in a row, right down to the exact same graphics in some cases. The only difficulty the game puts up is whenever it delivers a cheap hit such as an enemy’s knockback sending you off a tiny platform into a bottomless pit, AKA one of the worst kinds of difficulty.

Speaking of enemies, the bosses in Ninja Senki DX are borderline pathetic. This would have been a perfect area for the game to show off some muscle in one way or another, but all of them have two attacks/moves at best, aren’t particularly impressive or hard to avoid once you get the hang of things quickly, and in at least one case, went down in less than thirty seconds on my first try with zero effort. Well, except for the final boss, who naturally has a gigantic difficulty spike and moves around randomly while spamming near-unavoidable attacks. But the real dishonor here is a boss that gets repeated four times (making up half of the game’s bosses) without even the courtesy of a palette swap, and only has ability to fire a single tiny projectile at you while standing in place. It only manages to get hard in any way thanks to invoking the modern-day gaming trope of substituting a larger horde of enemies as a substitute for actual challenge, randomly dropping enemy ninjas into the arena.

So is there anything about Ninja Senki DX that works well? Well, per Tribute Games tradition, the classic pixel graphics are impressive. They’re not as lush and detailed as their previous work, but they’re colorful and fun, especially the enemy designs based on cartoonish aspect of Japan like yokai and sumo wrestlers. The music is also a nice little blast of energetic 8-bit glory as well, peppy and perfect for a game such as this. And as mentioned earlier, the controls are responsive and work fine. So if nothing else, the game at least has the general aesthetics down pat. 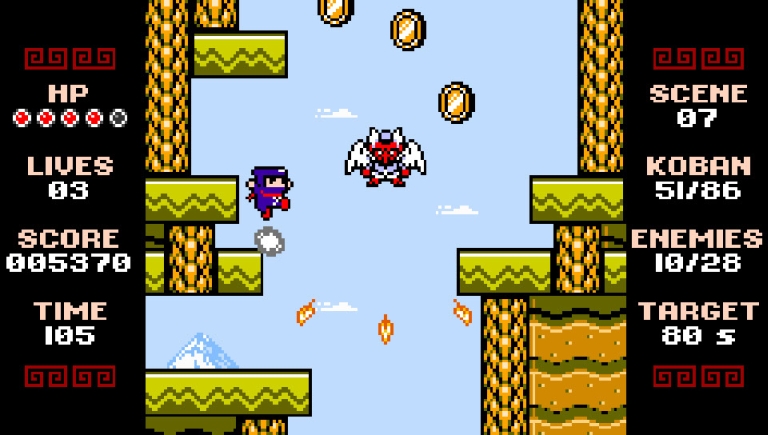 Even for a game priced at five dollars, Ninja Senki DX is a letdown. What could have been another classic addition to the Tribute Games lineup instead ends up feeling like any generic retro-inspired indie game. It’s far from terrible, but with so many other great games out there that do a much better reminding you of the NES days, there’s no need to pick up one that does a sub-par job at it. Save your nostalgic urges for something with more meat on it.