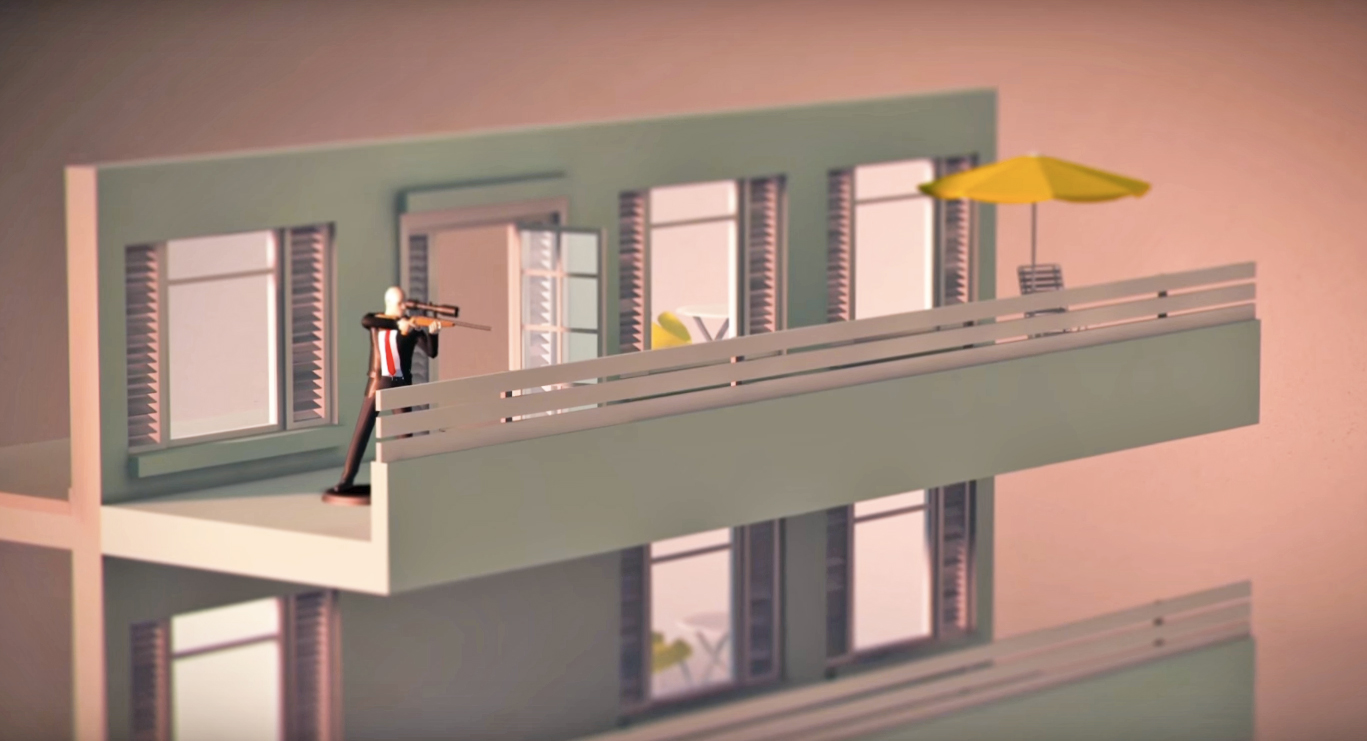 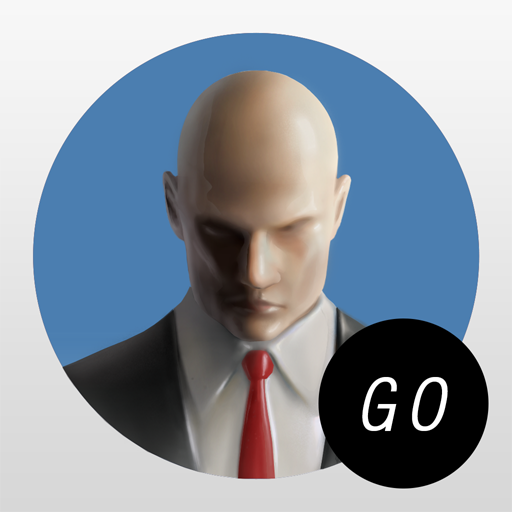 Aside from the fact that misreading its name will give you a hankering for tropical fruit, there was a lot to love when Hitman GO found its way to mobile devices back in 2014. While those of us who play puzzle games despite a complete lack of puzzle-solving skills find Square Enix Montreal’s first title to be far more challenging than its simple board game aesthetic lets on, Hitman GO is a wonderful example of how simplicity and difficulty are far from mutually exclusive. It’s one of the finest titles filed under the so-called “premium mobile” category, as its turn-based stealth puzzles are absolutely perfect for both pick-up and play sessions and longer runs of sixty minutes plus. Fast forward to today and Hitman GO remains in any conversation about which mobile games any human with a capable device should download, but that’s not why we’re here.

Hitman GO: Definitive Edition, which sees a release on PlayStation 4, Steam and Vita, is one of the only instances this industry has seen of a mobile-first title actually working competently with a controller and a television (what a strange thing this is, huh?). A complete version with a visual upgrade suitable for the big screen, the Definitive Edition is a great way to play a great game, and considering the stigma that comes with taking a mobile game to the big screen, that’s a strong accomplishment. While a newer tablet or phablet remains the ideal platform for Hitman GO, thanks to the combination of compact, ultra-high resolution screens and the simple fact that swiping a screen is the most fluid way of controlling your Agent 47 game piece, it’s clear that the right amount of care was placed into this port. From the satisfying feeling of weightiness during each of your moves to the multitude of always-enabled control methods, Hitman GO: Definitive Edition is a solid edition to any gamer’s digital library. Of course, there are a couple of nits to pick here, as Hitman GO at its core isn’t without its minor faults, but the plethora of instances of smart puzzle design shine far outshine any complaints here. 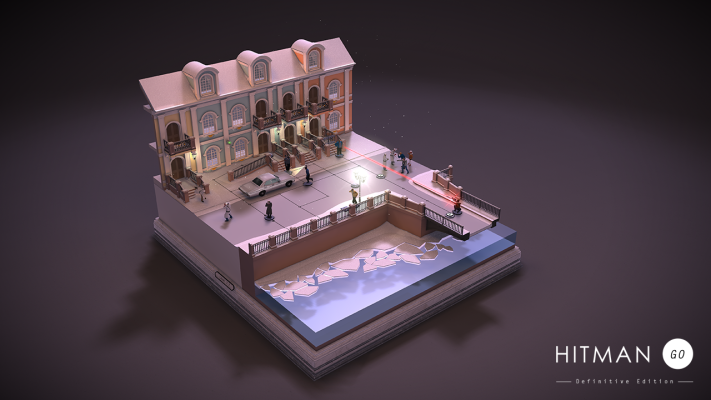 The most important thing to note here is that Hitman GO: Definitive Edition is absolutely the Hitman GO you know, only in a new place. Simply put, if you’re only looking to play new levels outside of the seven boards that are available in the original release, then the Definitive Edition is not for you. Of course, there’s nothing inherently wrong with this, as putting together a polished package with around five to six hours of content (perhaps more if you’re a completionist or simply play turn-based games methodically) is certainly worth the asking price here. With that out of the way, let’s dive into exactly what Hitman GO is for any of you who are uninitiated.

For all intents and purposes, Hitman GO is the virtual polygamous marriage of board games, stealth, turn-based strategy and, of course, puzzles. The goal of every stage is simple: get Agent 47 from the start of the stage to an ending spot without being killed. In a similar, but far far more simple, manner to The Witness, Hitman Go is constantly trying to teach you lessons about how its puzzles work in one way or another, all without a single line of dialogue. You’ll learn right away that enemies that land on your space in the gorgeous grid-based diorama maps will kill you, forcing you to restart from scratch. You’ll quickly pick up that each enemy’s appearance designates their movement pattern. Each example is simple to explain and understand; for example, large blue guards are stationary until you’re one space in front of them, orange guards will patrol in a straight line and dogs will chase you as soon as you are two spaces directly in front of them. On top of all of this, there are two side objectives (with level completion being the third) that you’ll have the option to fulfill along the way, with Hitman GO smartly allowing you to restart immediately after completion to gain additional rewards without having to hop back to the main menu to log your progress. Agent 47 also has various items at his disposal, from noise-based distractions like cans and rocks, to a full-fledged sniper rifle all the way to a disguise that allows you to sneak around unnoticed so long as you don’t kill anyone. What makes Hitman GO a game that many a gamer has kept on their tablets and smartphones for nearly two years is how it’s simple enough to be explained in its entirety in a few sentences, but the combination of all of its simpler elements add up to something that grows increasingly complex as item and enemy combinations vary. What’s more, all of this is done with a largely flawless difficulty curve, so it succeeds in creating that delicate tug-of-war between teaching and challenging you. 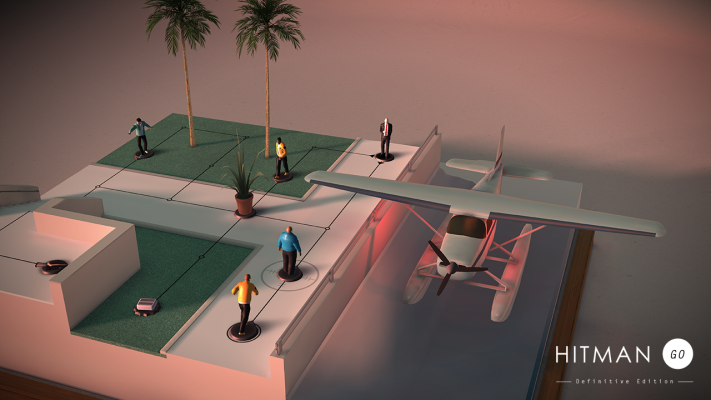 This isn’t to say there aren’t a couple of minor gripes that can be made about Hitman GO, but these are the types of complaints that make the difference between amazing and great rather than good or bad. While Hitman Go does utilize one of my biggest personal gaming pet peeves, gating levels in stage-based games behind items or side challenge completion (a la Super Mario 3D World and Geometry Wars 3: Dimensions), it’s worth mentioning the gates are low enough that those simply looking to beat every level shouldn’t have that tough of a time doing so. Granted, you’ll need to complete all of the challenges in the beginning, but that’s pretty easy, all things considered. Still, I’m not the only gamer in the world who feels a strong sense to complete every optional challenge for the first portion of a game only to gradually care less and less about meeting anything other than the minimum requirement to see everything. It’s clear that this is something that Square Enix Montreal may have learned to stray away from going forward, as Lara Croft Go’s traditional progression system suits this style of game far better. The only other issue from a gameplay perspective to speak of is that a few levels feel as though they get too caught up in manipulating the walking patterns of orange guards, forcing the player to shimmy back and forth multiple times. On one hand, figuring out the trick to these puzzles is immensely satisfying. On the other hand, these are the types of puzzles that drive players more towards guides and the in-game hint system instead of actual gameplay experimentation. These puzzles are certainly in the minority, but Hitman GO is at its best when it’s not giving you that, “How in the world was I supposed to know that?” feeling.

Again, those are minor complaints, as Hitman GO is a great video game through and through. Of course, being that the Definitive Edition was reviewed on the PlayStation 4, it’s time to dive into exactly what sets the console version apart from its mobile predecessor (outside of screen size). Easily the best tweak that this port received was the ability to switch between the left analog stick, the d-pad and swiping the DualShock 4’s touch-pad to move Agent 47. While the touch-pad has always felt slightly bizarre and out of place as a touch interface, there’s something nice about lying down on the couch and controlling a game with a single thumb. The d-pad is clearly the way to go here, as players can only move in four directions, though some of the automatic camera rotations in later stages didn’t make the smoothest transition over to a controller. You’ll occasionally stumble upon a situation where the camera will rotate, causing a bit of directional confusion until you fumble around with the right joystick (this happened around four times total during my playthrough). For those of you who haven’t banished your Vita to the bottom of some horrid sock drawer, you’ll be happy to know that Cross-Buy and Cross-Save are in full effect here, with Hitman GO: Definitive Edition opting for the more traditional cloud-save method of quick manual uploads and downloads that take no more than a couple of seconds on each side. Oh, and it goes without saying that the PlayStation 4 version is gorgeous, though that was to be expected considering the art-style here. 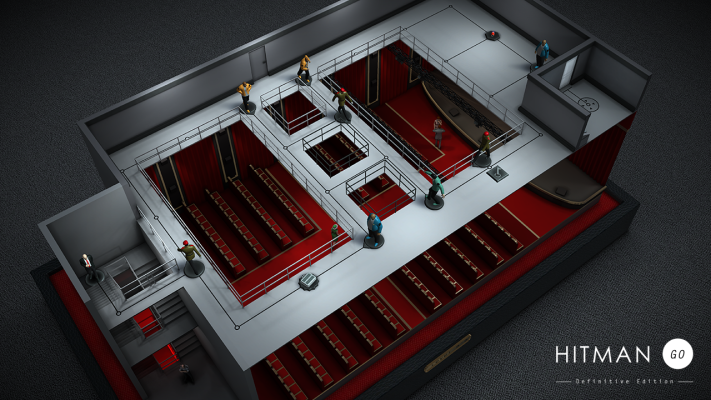 It would have been an absolute travesty to see one of the highest regarded mobile games in recent memory suffer on the big screen, but Hitman GO: Defintive Edition is a stellar way to play Square Enix Montreal’s debut title. Granted, if you’re not a fan of the original mobile release, then a collection of all of its content is probably not going to change your mind whatsoever, but those with an aversion to mobile gaming are going to find themselves in for a treat here. Aside from the fact that the camera will, very occasionally, cause some input issues, there’s really nothing to complain about in the Definitive Edition that you couldn’t have griped about when the original title released two years ago. There’s also the secret bonus of PlayStation fans who want something similar to Volume finding their solace in a mobile-to-console port (how’s that for interesting?). To make a long story short, if you’re looking for a puzzle game that feels just as awesome in short sessions on the go as it does on the big screen for hours at a time, as well as what is likely the best Hitman game since 2006, then Hitman GO: Definitive Edition is absolutely for you.