Having spoken in large volume about my distaste towards the previous two Souls games, it would be understandable to think a man of my stature (and nationality) would perhaps be the least logical choice to cover what is, understandably, an anticipated release to a much-beloved series for countless others. Yet, as previously covered, last year’s Bloodborne helped alleviate some of my former disdain with a game that helped to refine and reevaluate what Souls tended to squander. So coming into this particular analysis, my hope is that Dark Souls 3 can build on what Bloodborne helped refine. A step in the right direction, you could say.

So the first thing that sticks out — and already gets proceedings off to a good start — is the art direction and aesthetic. Or at least the early regions the player will be battling through in the series’ latest setting that is Lothric. The gothic architecture and rampant degradation of the land seems to paint an otherwise apocalyptic prosperity-turned-disparity picture to contrast what has been previous offerings of everything having already gone to shit. Such is the nature of speculation and already — from the aesthetic to the opening cinematic released earlier this month — fans are debating how the narrative plays into the context of Souls’ lore and World-building from a thematic stand-point. MY GOD…am I falling ill to the dreaded fever that is…’lore speculation’. Duly noted: I’ve never been remotely interested in Dark Souls’ backstory, least not its ‘use your imagination’ excuse for an otherwise hollow reason to care or get engaged with the theatrics on show. And yet…the way it reminds me of Bloodborne’s visual cues reels me in. If this is to be a tale that evolves as opposed to some static array of illustrious freeze-frames that were Dark Souls‘ environments, I’m all for it. 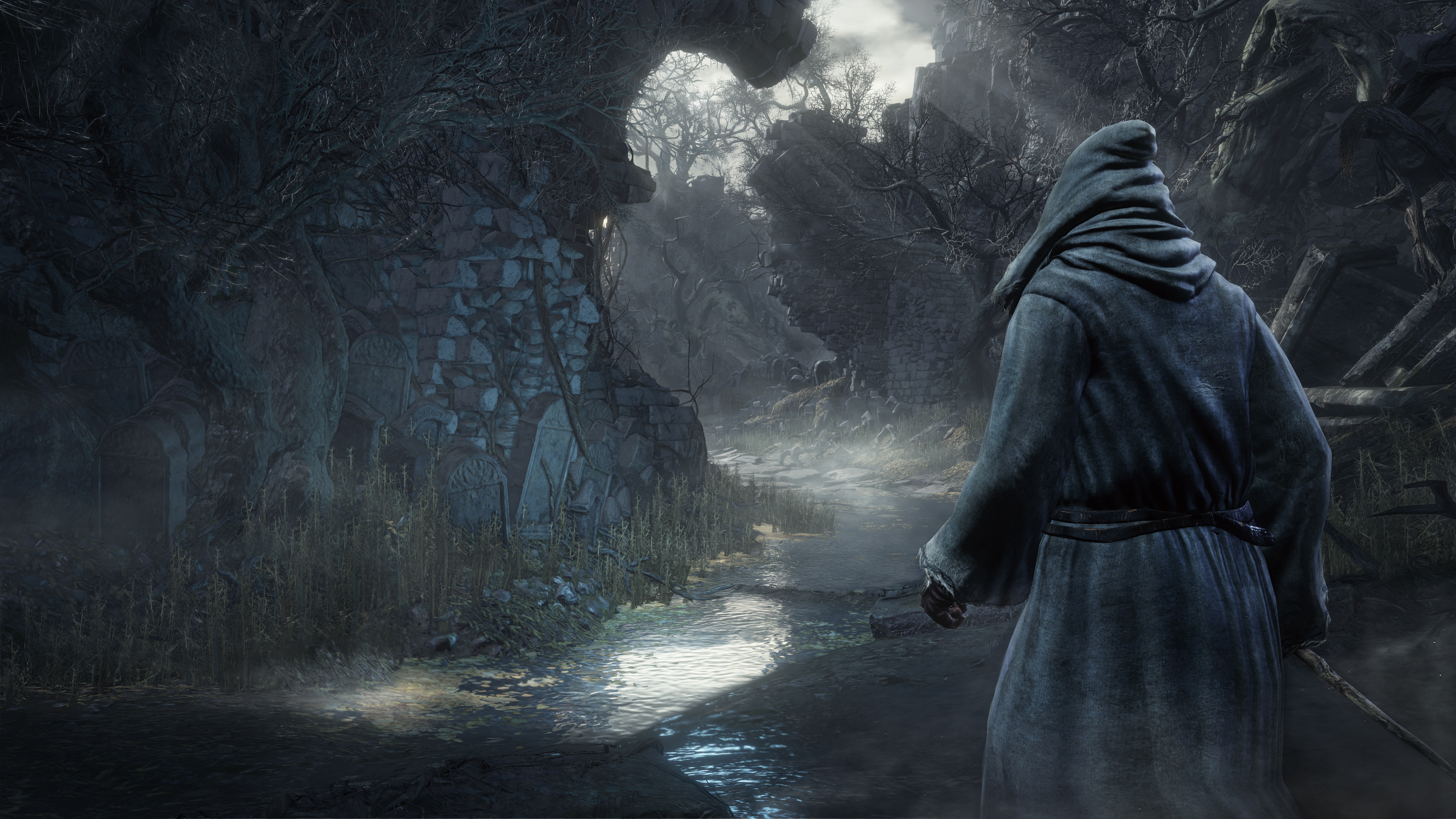 It’s no surprise Dark Souls 3 is taking from what From Software brought to the table last year. While Bloodborne may have possessed a more action-orientated play style to its Souls’ brethren, Dark Souls 3 — from early footage — appears to successfully weave the series’ calculated risk-taking with Bloodborne’s fluid mechanics. But in typical Souls fashion, the gameplay never strays too far from the core idea of strategy ad infinitum. The objective: countering your foe’s tactics…with said foe trying to counter you at the same time. So where the player-character’s movement is increased and is evocatively more immersing, enemies can stun you into combo attacks…by which you can exploit to use your newfound abilities dubbed a Sword Art online (heh, I’m so clever) or offline — itself tied to a meter that requires topping up — only for enemies to demonstrate a more flexible range of attacks including backstab-preventing shield barges and damage incurrent on their entire perimeter…to name but a few.

This multi-layered, multi-faceted playstyle feels like a breath of fresh air and pulls Souls‘ former sluggish, stop-start combat into more prudent territory — one that appeases both long-time players (lovers and loathers alike) as well as newcomers who may have gotten their first taste of From Software’s gameplay philosophy in Bloodborne. Even the less-engrossing moments from something as simple as chugging down another shot of your beloved Estus or watching streams of blood shoot from out an enemy’s body feels quicker, immediate. An sufficient result of new hardware possibly, and given this is Souls‘ first outing into eighth-generation territory, it’s no surprise to find the gruesome and gut-wrenching fidelity that bit more detailed…and palpable. 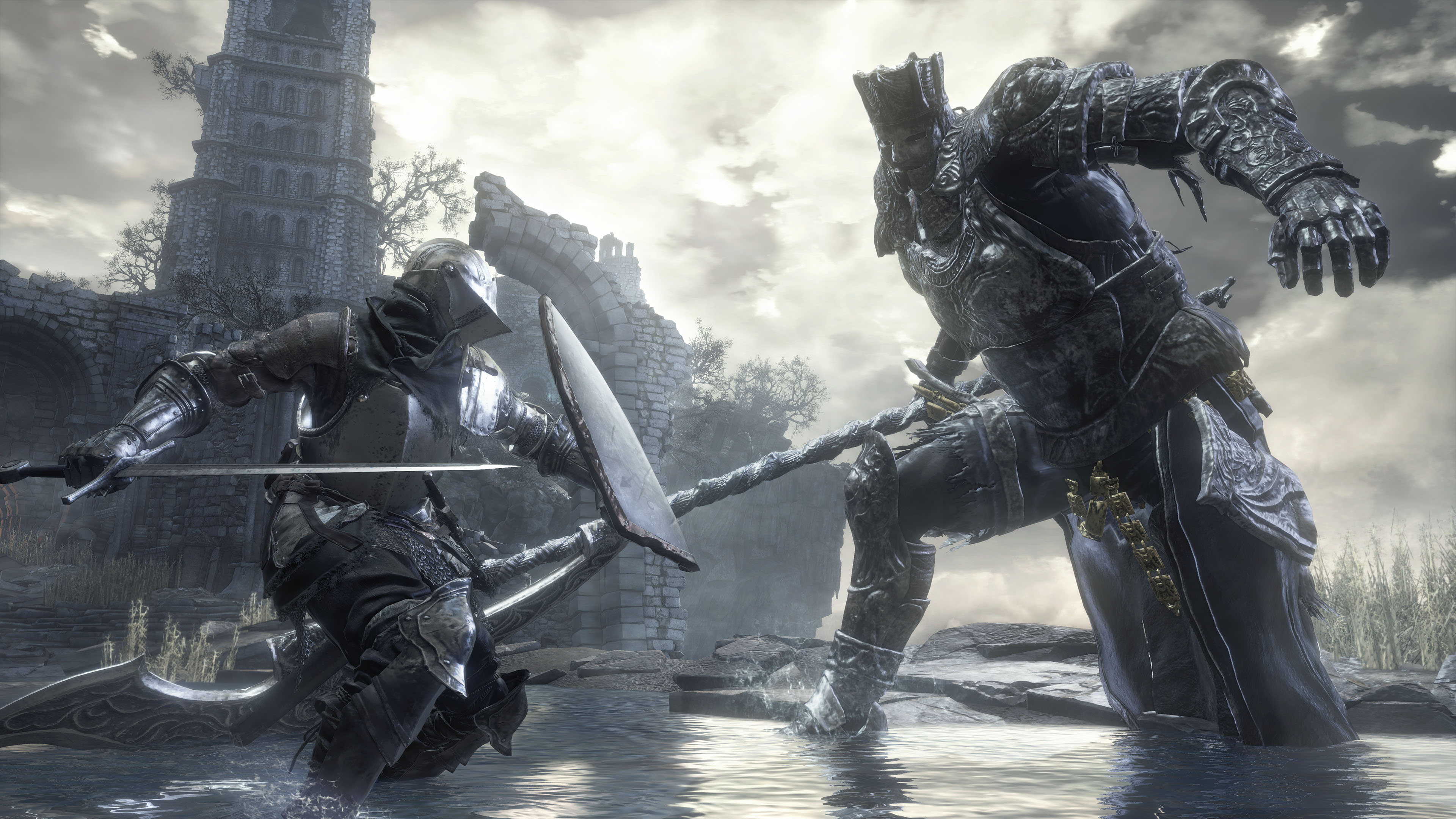 But it’s promising to see From haven’t just stopped at the visual eye-candy and have gone in with the intent to build on player’s expectations, as much twist them from what they’ve come to expect, both as a game and an assembled tale of stories and themes So to find enemies and even some bosses mutate (another atypically From mechanic) with health under half-way, this time into Bloodborne-esque monstrosities that defy logic (and lore…possibly), a part of me wants to smirk at those who expected a complexly-simple tale of every fantastical, spiritual and supernatural commodity there is to be used in any work of fiction. Don’t get me wrong, this opens up a potential Pandora’s Box in not just Souls’ world-building, but also in the way it progresses difficulty and how later challenges can turn into heavy-handed grasps for survival and understanding. Be it physically, emotionally or something else entirely.

Getting ahead myself as I am, it’s important for me to state my intrigue as to how Dark Souls 3 fairs, for it’s the closest I’ve come to understanding the almost-universal appeal of this game. It conjures a familiar precedent with another game I was hotly anticipating for completely different reasons. So too I’ve commented on it; thus, Dark Souls 3 has the potential to be the next/latest [Metroid] Prime 2 moment in my gaming life – a game that improves significantly on the former’s showing and sets a great example for how environment, narration and natural progression can weave perfectly together into one. Let’s not get ahead of ourselves though: Metroid Prime and its sequel are two of the finest games in living memory. Dark Souls and its sequel respectively, aren’t. But hey, opinions! Here’s hoping Dark Souls 3 can win me over entirely, because from early signs, it’s looking extraordinarily…dare I say it…good.