Nintendo’s Wii U has gained some traction since it spluttered out of the gate back in 2012, but with sales barely over 11 million worldwide, the console is still being enjoyed by far too few people. As such, many of the system’s remarkable games — titles like Splatoon, Super Mario 3D World, and Xenoblade Chronicles X — are being missed by millions. Those games don’t look to be branching out to other platforms any time soon, but another Wii U exclusive, Hyrule Warriors, is set to bring its action-packed combat and iconic roster to 3DS in North America next month. The enhanced port, titled Hyrule Warriors Legends, will expose Koei Tecmo’s surprisingly robust and enjoyable mussou to legions of 3DS owners who missed the game on Wii U, but will it be worth a double-dip? 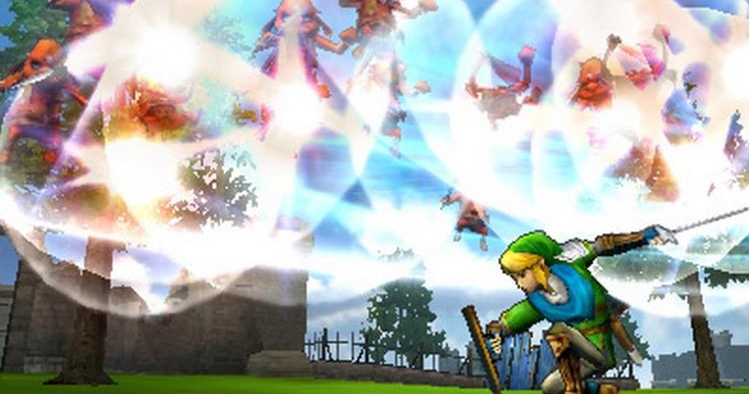 The Koei Tecmo-developed Hyrule Warriors married the worlds of The Legend of Zelda with the gameplay of the Dynasty Warriors series, and though unlikely that pairing produced a deep and enjoyable adventure that carefully catered to its fans while shifting the focus from puzzles to action. Hyrule Warriors Legends is largely the same game that released on Wii U back in 2014. It totes the same plot, characters and gameplay of its predecessor — including all of its DLC content — but the developers have also taken the time the opportunity to add new features and characters to the package, creating what appears to be the definitive version of the game, at least in terms of sheer content.

We enjoyed Hyrule Warriors on Wii U, but the lack of Wind Waker representation felt like a missed opportunity, especially after The Legend of Zelda: The Wind Waker HD had launched on Wii U just a year before. Hyrule Warriors Legends will remedy that omission, however, adding Toon Link, Tetra, and the King of Hyrule to the roster of playable warriors along with a selection of stages pulled directly from The Wind Waker. That initial reveal certainly got the hype train rolling for a lot of fans, but why wasn’t that content included in the Wii U version at launch, or at least offered later as DLC? To be fair, Nintendo has said that some of Hyrule Warriors Legends’ content will be available on Wii U, granted that you buy the 3DS version and redeem the download code that comes inside. This method only accounts for some of Legends’ exclusive content, however; maps, story content, and other features appear to be stranded on 3DS, a point that will be especially upsetting to players who have already invested time and money in the Wii U version and its copious DLC. New players will certainly most enjoy the benefits of Hyrule Warriors Legends, considering that all of the original game’s DLC is included, but it’s strange that Koei Tecmo hasn’t made the new Legends content available to purchase for the Wii U version as well, especially since those original fans helped cement the game as a success. 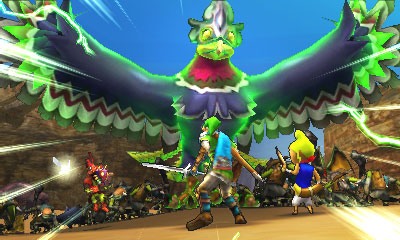 Hyrule Warriors Legends does have some other exciting features its predecessor lacked, though. The most notable is the new ability to switch between fighters throughout a battle, adding flexibility and variety to the whole experience. In the Wii U version, players were shackled to one warrior for the entirety of each mission, despite the presence of other iconic fighters in other areas of the battlefield. Giving players the power the switch between characters will not only let them immediately counteract any combat repetition they may feel subjected to, but it will also imbue them with more agency in each battle. Many of Hyrule Warriors’ mission objectives involve securing and defending territory, but because the game’s maps are so sprawling and segmented it was often difficult to trek from one end to other in time to really partake in a crucial clash. Switching between characters via the touch screen is an intuitive solution to this problem, and should make the experience noticeably more fluid and enjoyable while honing in on the game’s action.

One salient area that remains questionable, however, is Hyrule Warriors Legends‘ performance. The original game took advantage of the Wii U’s capable hardware to produce impressively detailed character models and environments while providing spectacular action, but the 3DS simply can’t match the sheer strength of Nintendo’s home console. Hyrule Warriors is predicated on slicing through hordes of enemies at a time, but it remains to be seen whether the 3DS can handle rendering and animating that much action at once, even at a lower resolution. Though Legends is not exclusive to the more powerful New 3DS, it will enjoy performance boosts on the newest and most powerful version of the handheld. It’s good to see developers taking advantage of the New 3DS enhanced processing power, but that distinction also means those playing on previous iterations of Nintendo’s system may have a significantly different experience with Hyrule Warriors Legends.