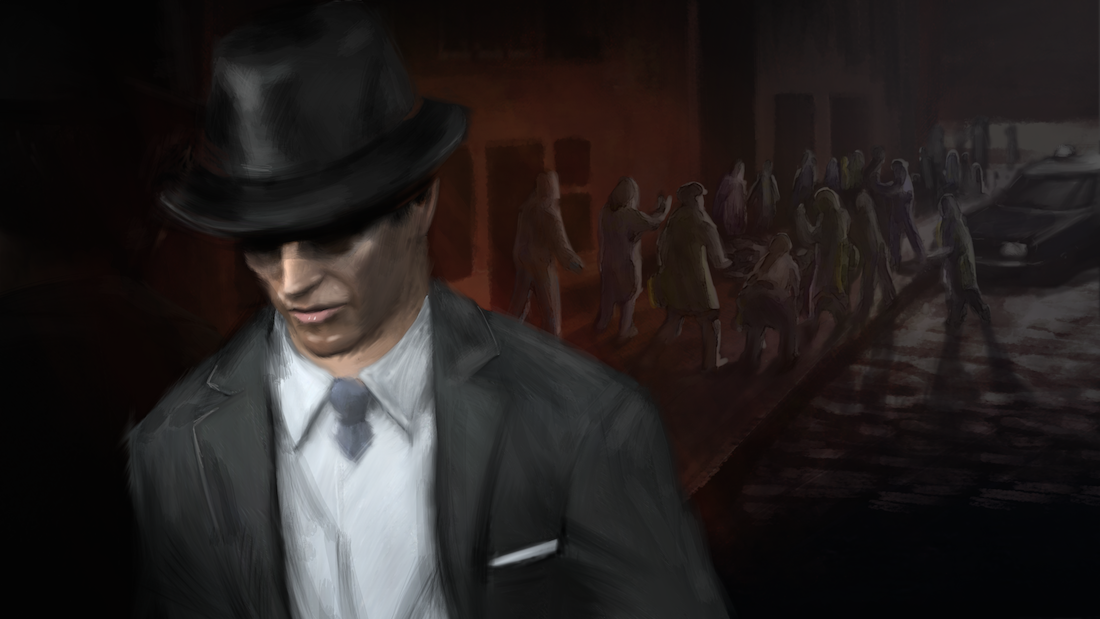 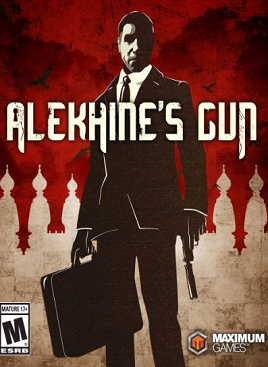 The concern first began upon starting up Alekhine’s Gun. When developer Maximum Game’s short logo animation came up, it stuttered and crawled like a streaming video on a 56k connection. Still, this could simply be an ill-advised stylistic decision and not indicative of the actual gameplay itself. If only that were true…

It’s easy to get on board with the concept of this thriller. A historically-based, Hitman-influenced stealth adventure title is intriguing. Considering the strangeness surrounding the next edition of the venerable series is subject to many odd and controversial choices, with it going episodic and so on, fans could use an outlet that plays it straight. Hearkening back to the classics of that series could win some easy converts. Playing as an ex-KGB operative who now works for the CIA is also not a bad idea, giving the audience a taste of the other side of the Iron Curtain. What damns Alekhine’s Gun is a laundry list of whiffing on the fundamentals, rendering these good intentions moot.

After loading up the first mission, it’s immediately apparent that this title needed more time in the hopper. The fear about the frame rate was shown to be well founded. Turning the camera to view the surroundings chugged somewhere around the rate of the mid-teens at best, which has the potential of causing more than a few literal headaches. This is with a graphical style that has the appearance of an HD touch up of a PlayStation 2 era title. To be entirely fair, there are some nice shadows to be seen when outdoors. Otherwise, the textures are bland and reused quite a bit, the character models look off and the animations cut the cords suspending disbelief. Setting these issues aside and diving into the game itself yields a entirely new nest of problems. Maximum Games advertise that there are multiple solutions for every mission. This may be true, but the interface here simply doesn’t make these clear. Going back to Hitman, there were numerous ways to finish a job. Dropping a chandelier in the target’s head, tricking one of their friends into doing it, or just straight up sniping the guy were all viable options for just one target. Here, not so much. 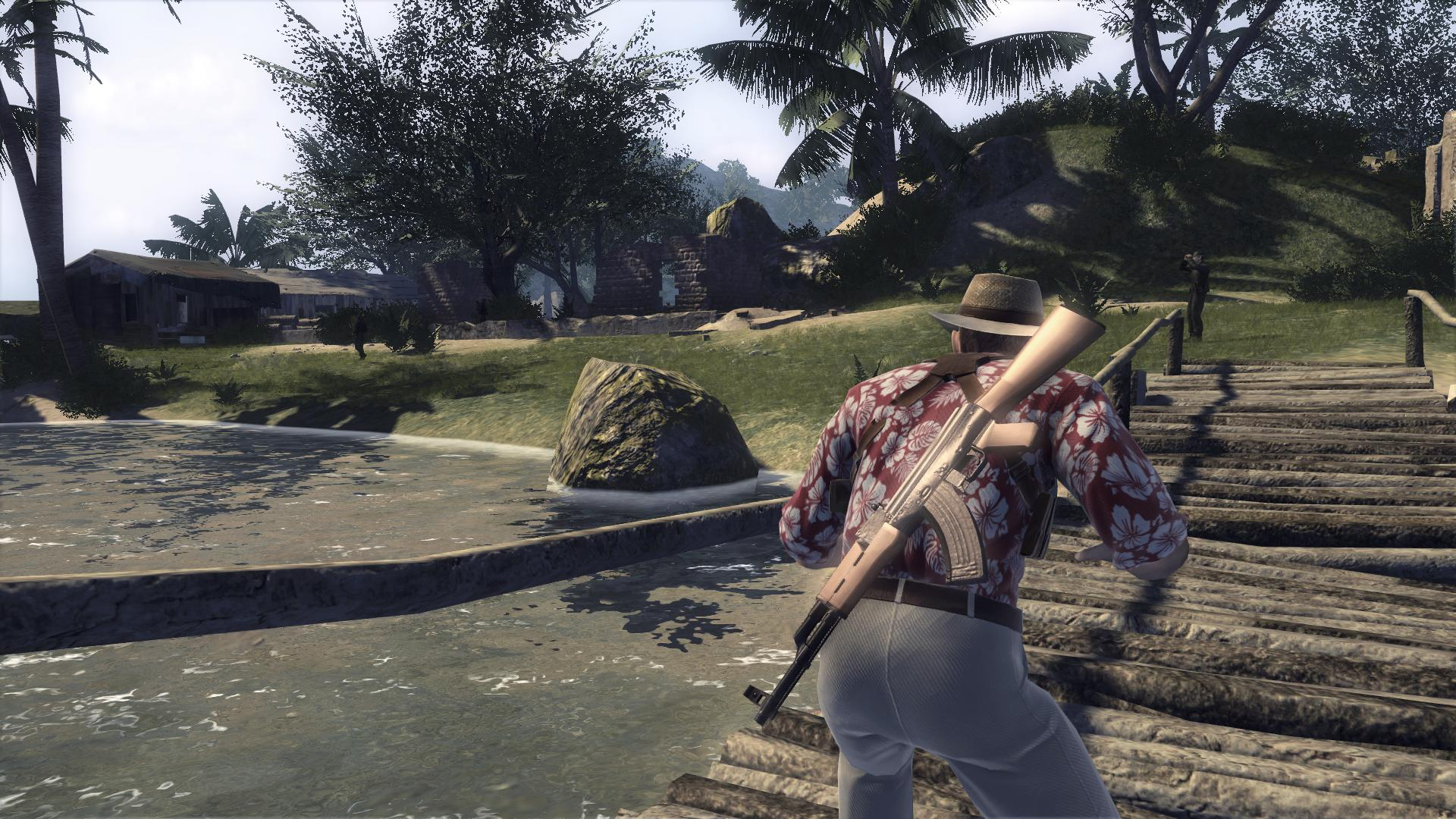 In the first mission alone, I was tasked with eliminating a Nazi officer. After garrotting a conveniently placed trooper for his uniform and MP-40, I began exploring the complex. Finding the officer in the dining hall, I used the “instinct” function (intended to point out areas of interest) to see that I can stand guard. I proceeded to do so, only to have a soldier approach me and start flailing widely. I believe that it was meant to be a salute, but I can’t be certain. Thinking that I may have accidentally taken his post and made him suspicious, I attempted to walk away. Except I was stuck. Soon, the alarm was raised and I was dead.

Upon reloading, I realized this game has no auto-save feature. That’s fine. The game lets the player save at any point mid-mission, so that can be overlooked. So, garrotte, strip, and back to where I was. Saving first, I took up the same post again. This time there was no over-eager troop. The officer got up from the table and wandered past me. Following like a dutiful guard, the officer enters a doctor’s office and comments that he is sick of waiting for his check up. Logically, that would be a hint that it’s time for me to play doctor! The office empties out and I search it, accidentally picking up two items. What they were, I did not immediately know. The notification left the screen quickly and there was no obvious way to bring up the inventory. Eventually, I figured out that the inventory screen can be accessed by bringing up the map via two simultaneous button prompts and then scrolling over. There I learned that I picked up poison and a syringe. No doctor’s outfit, though. 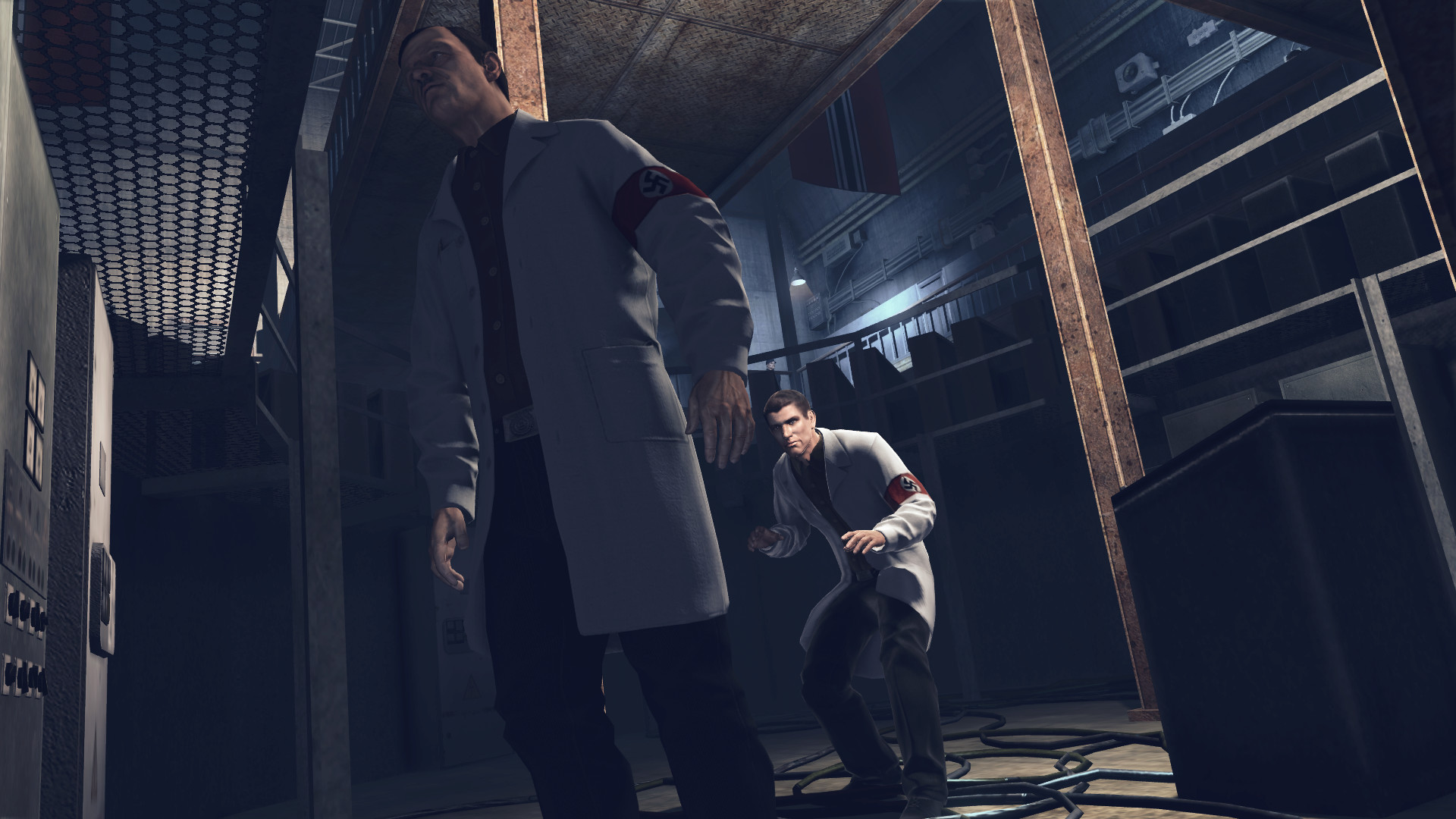 The title plays out like this on a continual basis. It feels less like the impetus is less on solving the tasks laid out before the player and more like solving the game’s arcane interface. The details of my opening experience were put down to give more of a taste of what was to come. Nothing is set up in a logical sense. For example, why would there be poison in a doctor’s office? When the officer was finally killed, where did the body end up? It sure would have been useful to get his uniform to access the officer’s quarters which was required for another task in the same mission.

The flaws continue through every aspect of the game. Cutscenes are used to tell the story between missions. These utilize static drawn images with laughably bad voice acting, These would be alright except for the paucity of the images. Expect to stare at the same drawing for at least thirty seconds at a time. They cannot be skipped, either. Considering that this has been a common complaint of gamers for years, the only excuse would be if they were used to mask loading times. It should surprise no one that this isn’t the case here. 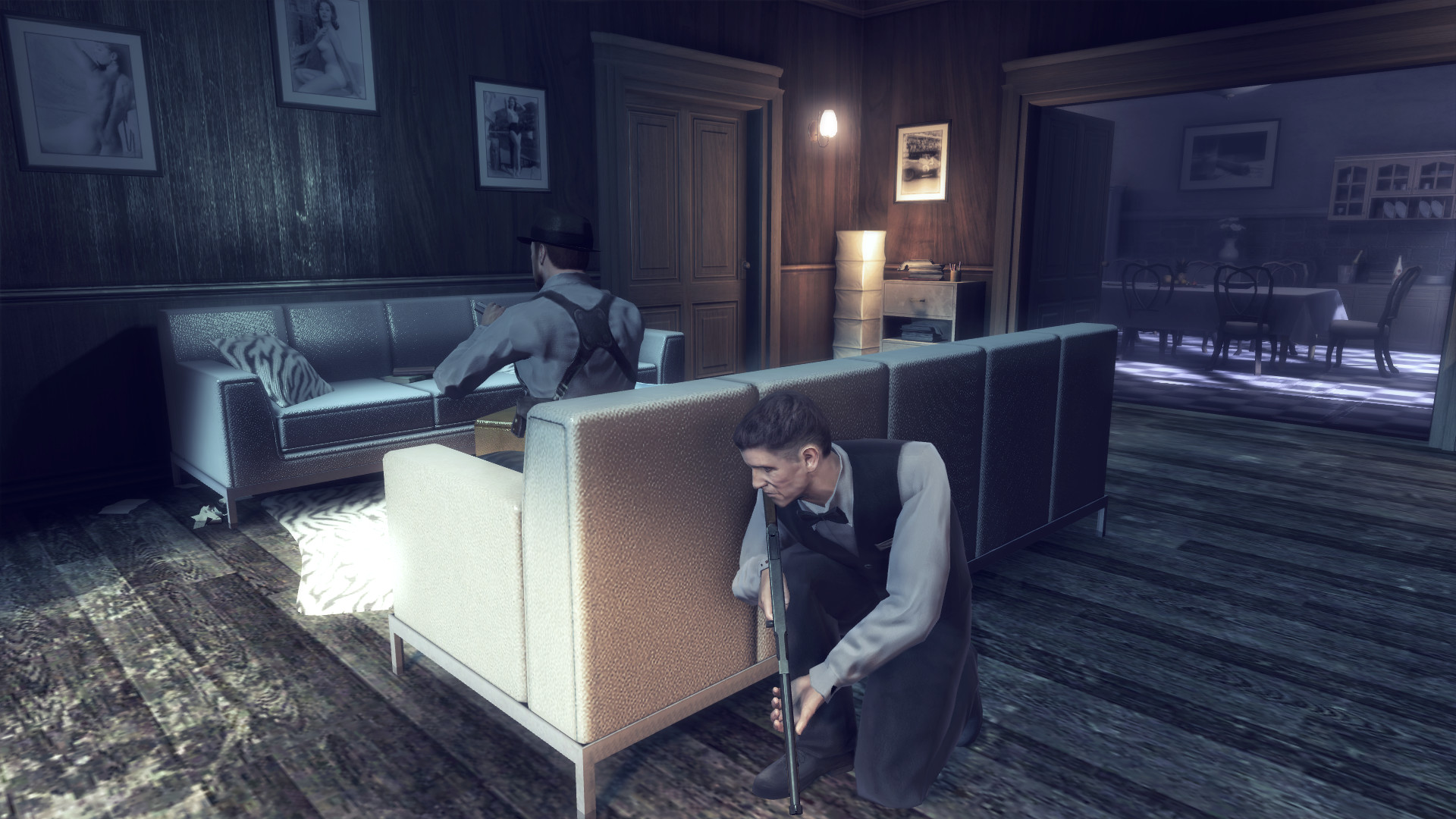 One bright point: the minigame for picking door locks is cool. It’s just matching shapes of the tumblers to the pick, but it feels authentic. The dial safe version of this doesn’t fare as well. The tumblers shown are accurate and behave like a real dial safe, but the spring and dial sequence, that can vary per safe in the real world, are not explained here. This leaves the player guessing regarding what they’re doing even if they know the combination. Having had real experience working dial safes as a day job, seeing what the tumblers were doing should have been a snap. It wasn’t.

As for gamers who decide to just say “screw panache, kill them all” will quickly discover that this is not a viable option. Even if this game were balanced to allow for that option, which it is not, aiming and shooting simply doesn’t work. Readying a weapon brings the cross hair up in a spot that has no real bearing on where the original center of the screen was. Therefore, actually hitting a target before getting shot is based purely on luck. It makes one wonder why gun play was even included. The developers obviously did not mean for this to be an option even if it worked, considering how easy it is to get murdered. Keeping guns as a uniform accessory and focusing the time spent on developing the weapon handling would have been better spent finishing the parts that were intended by the developers to be used. 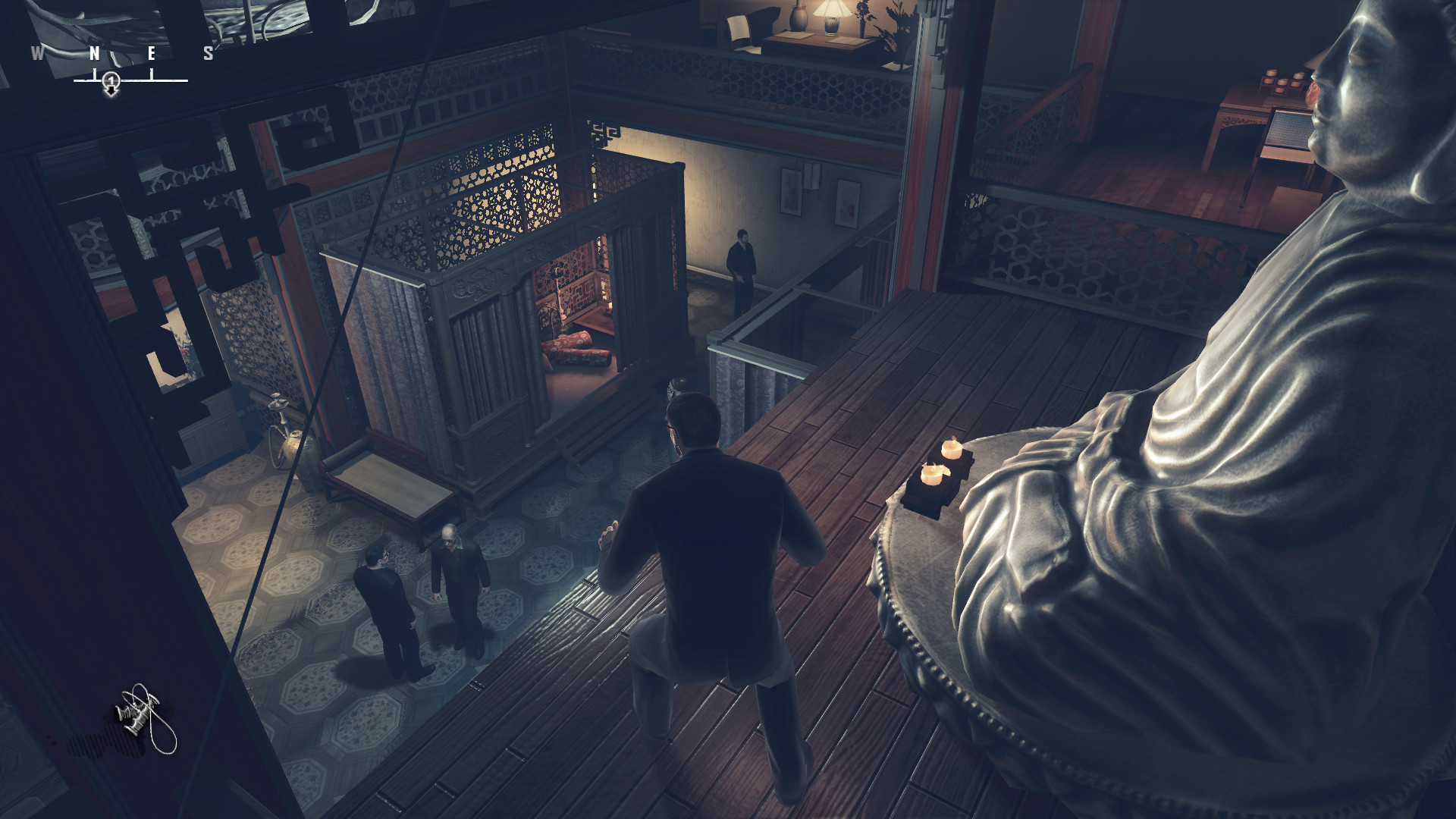 Alekhine’s Gun is a title where the ambition of design outmatches the execution with gusto. Describing what it tries to do makes it sound like the tonic violence prone adventure gamers have been wanting since Hitman: Blood Money. With great dismay, it must be reported that Maximum Games missed the target. The right ideas are in place, but everything about the execution falls flat on its face. Considering how much I wanted to enjoy this, the average player probably won’t be able to handle a full playthrough.