Gamevil continues to update Dragon Blaze with new content to explore. While we haven’t really gotten anything significantly new outside of new allies in a long time – it has mainly been the same seven activities every week – there are some new additions this time around.

Firstly, the user interface is getting a slight overhaul as the “Adventure” mode is going to be strictly for exploring the campaign and daily dungeons. Now there’s a new tab called “Fight” or rather Honor Gorge that holds all the extracurricular activities. This includes Guild Battle, Labyrinth, World Bosses and Arena. There are also three other tabs that are currently locked, but those are modes expected to come at a later date.

In addition to this modification, Belle Snow makes a reappearance in the form of a daily check-in that will remind players of some of the activities that can be accomplished.

Next is the new World Boss. Prior to this release, there have only been two bosses to face: Hydra and Golem. Players need more AOE damage allies for the Hydra whereas Golem is more about fast, one-hit strikers such as rogues. Shariet is a giant tortoise similar to the raid boss Leviathan, but instead of focusing on damage, it’s in the player’s best interest to keep the battle going as long as possible as there will be three combatants in the stage with you that will do significantly more damage. This boss battle will be available every Saturday. 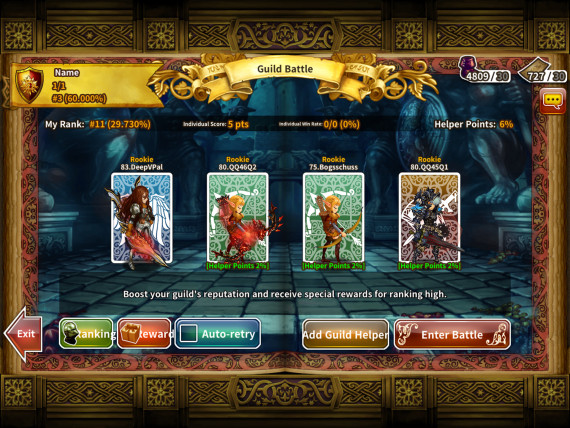 Guild Battles are getting an overhaul. Previously, players would need to invite a guild member with one ally into battle. The new Guild Battle has been restricted to player characters and guild members must register their own for others to use asynchronously (as seen in the image above) with additional points being handed out to those individuals. Wins will now be worth 50 points, 25 for ties and 5 for losses.

Finally, while this update technically came late last week, a new pet has been introduced and she is one of the more important and exciting additions to the Dragon Blaze ethos. Scarlet Tia is her name and unlike the other pets who require rubies to acquire, players need to dish out $9.99. This is an excellent addition and more than worth the price of admission as she grants players 30 rubies and 20 shoes every day they login.

Other changes are an increased gold limit, auto-retry for Arena returns, a new magic system for specific equipment, and various others. It’s a big release this week, hopefully changing things for the better. Unfortunately there won’t be any new allies to create this patch, although the final Boden wave is expected to come later this month.

The latest patch is being issued March 14 between 6-11pm (PDT) available right now. Dragon Blaze is currently available for iOS and Android users.