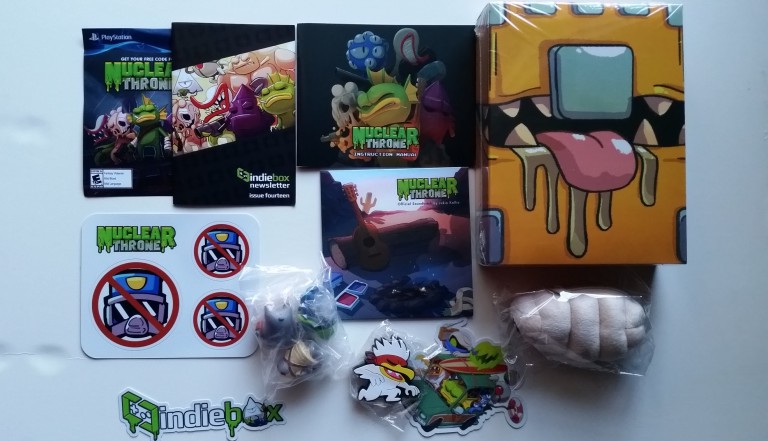 If you’re a collector of physical gaming goods but have never heard of IndieBox before, then it definitely needs to be on your radar. This monthly subscription box delivers a different PC indie game for folks who aren’t necessarily fussed about what game they’ll actually be receiving. As of the start of 2016, they raised their subscription fee a tad which came as a surprise to many. After January’s offering of Nuclear Throne, however, it quickly made sense why prices were increasing. This limited edition box is absolutely packed with interesting goodies that are more presentable than some of previous tchotchkes they’ve provided for other titles.

Nuclear Throne is of course that excellent top-down shooter/roguelike which Vlambeer finally pulled out of Early Access late last year. With such a huge fan following it only made sense that it would get some sort of physical edition down the line. I just didn’t expect it to come from IndieBox! In any case, you can tell it’s special right from the get go. The box itself features a clear plastic sleeve with the logo on it. Once that’s off you’re left with the lovely art of a big old drooling maw. This depiction is actually a pretty accurate representation of what a gamer might do upon opening the box up and spilling out its many contents. So, let’s get to it! 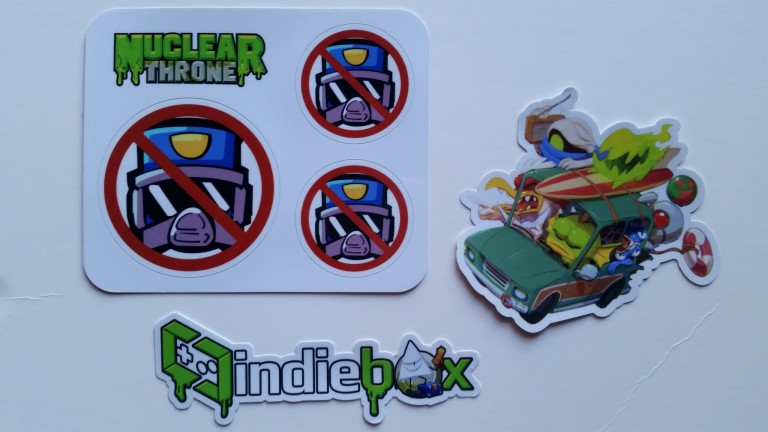 Inside the box you’ll find a variety of stickers, miniature figures, and even a small plush. Of course, Nuclear Throne is also included. Actually, there are multiple copies. The shipping box itself featured a Steam key for the game (as is now IndieBox’s norm) but inside there is also a PlayStation Network pamphlet which includes a key for play on both PS4 and PS Vita. Here’s hoping they continue to include complimentary console keys for future games when titles are multiplatform. But keys aren’t enough for some people so there is always a DRM-free copy included. This time around they’ve finally ditched the rather cheap USB cards and have instead gone with a custom USB drive. It’s housed within a rubber Chicken which opens at the seam in the beak to reveal the USB plug.

Then there are your fair share of more standard items within the Nuclear Throne box. For example, there’s a 24 page color instruction manual pamphlet to get folks acquainted with the game. Then there is the 35 track game soundtrack by composer Jukio Kallio. The music itself is great but the cardboard sleeve containing it shows that there’s very little production money going into both of these goodies. Three stickers are also included, such as the monthly IndieBox logo one alongside two other sets. One depicts a small car crammed with playable characters and another set features some “no Po-po” imagery. While all these items are nice, they aren’t the standouts this time around. 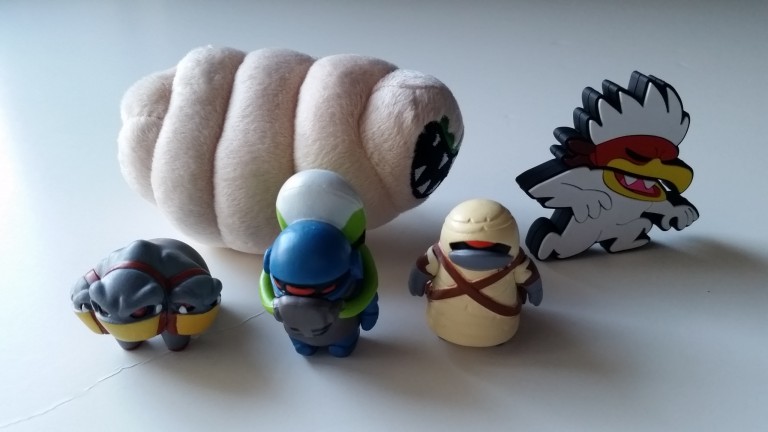 What really makes this set pop are the three included mini figures. These bosses are tiny and adorable, representing Big Dog, Big Bandit, and Lil’ Hunter. Each is approximately 1.5 inches tall (or long, in the case of Big Dog). All in all they make a great trio of adornments for your desk or shelf. My favorite item of the entire box is the plush Maggot. It’s, well, it’s a plush maggot with a zipper pouch on the underside. This grubby white creature has a big toothy mouth and green drool but otherwise nothing about it necessarily screams Nuclear Throne. What I’m saying is you could basically take this thing around as a regular old maggot-shaped coin purse which sounds like a perfect use in my opinion.

IndieBox really hit it out of the park with their Nuclear Throne limited edition and it remains to be seen if they’ll continue to outdo themselves in future months. Fans of Nuclear Throne might be able to purchase this set for themselves on the IndieBox store in the future, but it’s not available just yet. Popular boxes (such as Axiom Verge) tend to go incredibly fast. It’s a shame because game editions such as these deserve a greater audience. Nuclear Throne is an awesome game, after all, and some will want a physical item to help showcase their adoration of the title.