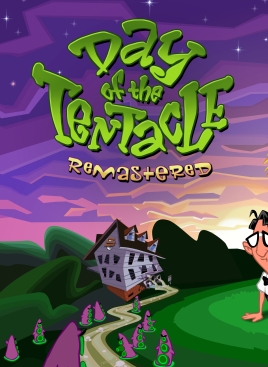 Day of the Tentacle Remastered

Over two decades ago in 1993, a sequel to the popular adventure game Maniac Mansion was released, going by the monitor of Day of the Tentacle. It was a more innocent time back then: colorful mascots with attitude were starting to become all the rage, countless quarters were sunk into NBA Jam machines in arcades everywhere and a game with the word “tentacle” in its name could actually be released without childish snickering from anime fans. And in that time, Day of the Tentacle was released to much acclaim, helping to solidify the golden age of LucasArts adventure games. And now, such a game considered to be one of the greatest of its kind is finally getting the remastered treatment. So now the question arises: is Day of the Tentacle still relevant in this day and age? The answer to that question is, of course, “well, DUHHHH.”

Pretty much every notable graphic adventure game these days still owes its existence to the likes of Day of the Tentacle paving the way for other games like it. Hell, we reviewed a modern cartoonish adventure game where you travel back and forth through the past, present and future literally just a few weeks ago. Now the king has returned, ready to be enjoyed by a new generation, and it still feels just as clever and amazing as it did when I first experienced it on a set of floppy disks.

For those of you unfamiliar with it, Day of the Tentacle is the story of Purple Tentacle, one of the residents of the Edison mansion. After drinking from a river filled with toxic sludge behind the mansion, he gains the incredible power of having hands, and with a newfound taste of power, sets out to conquer the world. Luckily, his brother Green Tentacle sends off a message to Bernard Bernoulli, of the kids from the first Maniac Mansion who traversed the Edison household five years before. Along with his college roommates Hoagie and Laverne, the three head back to the mansion (which has fallen on hard times and now rents itself out as a part-time motel) and cook up a plan with patriarch Dr. Fred Edison to travel back in time and prevent Purple Tentacle from ever having taken that drink in the first place. 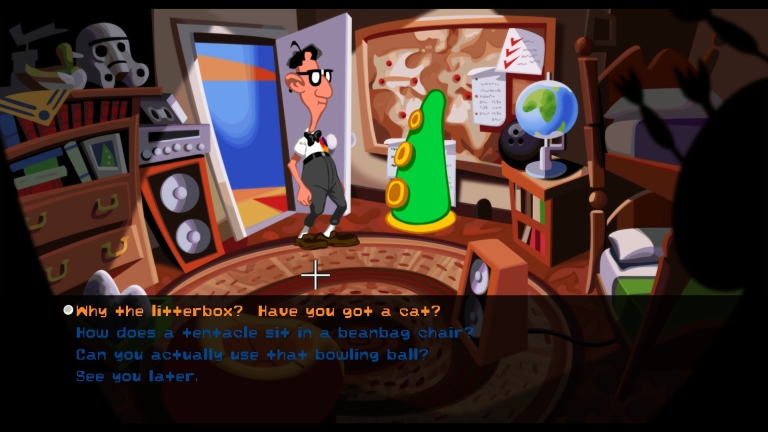 Unfortunately, things go awry and our trio get separated. Hoagie finds himself stuck in colonial times and has to build a battery to power up his time machine, Bernard is still in the present and has to find a way to purchase an expensive diamond in order to power the now-broken Chron-o-John, and Laverne has to escape from a tentacle-led dictatorship two hundred years in the future…after she can find her way out of a tree, of course. Day of the Tentacle was innovative in that it was one of the first adventure games where you were able to switch between characters on the fly, and one of the first involving time travel-related puzzles where your actions in the past can affect the future, as all three protagonists find themselves traversing the same domicile through different eras. For example, just to get Laverne down from a kumquat tree and start her side of the story, you have Hoagie search around for a can of red paint, paint the kumquats red, then trick George Washington into thinking that it’s a cherry tree he can chop down so the tree in Laverne’s time ceases to exist. Simple as that!

Indeed, one of the greatest strengths of Day of the Tentacle was that much like its contemporaries such as Sam and Max Hit the Road or the Monkey Island games, it knew how to expertly weave humor in with the gameplay and the various puzzles that you have to solve. It’s the type of game where you have to read a textbook to a talking horse in order to make it fall asleep so you can steal its dentures to place on the mummy so that it can win a beauty contest, and yes, that actually happens, and the sheer absurdity of it all is just so gleefully fun. You’ll encounter the remains of novelty gag conventions, learn how to traumatize hamsters again, screw with the Constitution, and even come across meta gags concerning the Edison family being cheated out of royalties from the first game and the short lived live-action sitcom based on it (yes, that existed, we’ll see about possibly taking a look at that later).

It helps that the graphics still look as gorgeous and gleefully demented as they did back in 1993. I personally prefer sprite-based graphics myself, but the remastered version’s slick style is also incredible as well, recapturing every zany, offbeat, and colorful area in a high resolution style. Everything in the mansion is askew, reality has taken a holiday, straight lines are a rarity, and it is beautiful. The remastered music and voice acting is amazing as well, perfectly capturing Bernard’s geekiness, Hoagie slacker metalhead attitude, and Laverne’s spaced-out speech perfectly. You can even mix and match between the art and music styles to create whatever combo you like, even being able to flip between the former at the touch of a button. 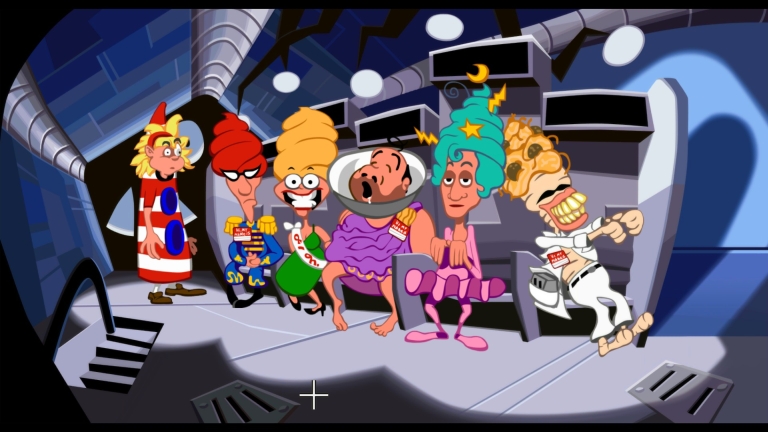 Speaking of which, another new addition to the remastered version is the ability to choose between control schemes whenever you want as well, much like last year’s Grim Fandango Remastered. The traditional method of selecting verbs and actions to carry out your tasks is still there for purists, but now you also have the option to use a more simple verb dial as well, where clicking on an object or person reveals everything you can do with it. It’s fun and simple, and definitely makes a notable difference indeed.

Alas, I did run into a few bugs with the audio as well. There were a couple of moments where the background audio went silent, some of the speech ended up being too fast for the on-screen text to catch up to, and at other times the audio slowed down like a record player changing speeds. Most of these glitches were rare, though (and in some cases, may be more due to to my own PC’s specs), and barely affected the experience, but were still a slight nuisance.

The only other flaw I can think of is that compared to modern adventure games, Day of the Tentacle is also quite short, clocking in at just over four hours for me. Then again, this could also be simply because after having beaten this game at least three times already during my youth and due to its own legendary status, the puzzle solutions are memorable enough to get etched into one’s head. Yes, this game having such an amazing legacy on gamers everywhere works slightly against it. Of course, you also have extras such as commentary from Tim Schafer and the rest of the game’s original creators and a slew of achievements to hunt for as well, and in a testament to preserving the original game as much as possible (minus the copy protection), you can still play the original Maniac Mansion on the computer in Weird Ed’s room. Yep, a full game within a game! This was legendary back in the day, folks, so soak it in! 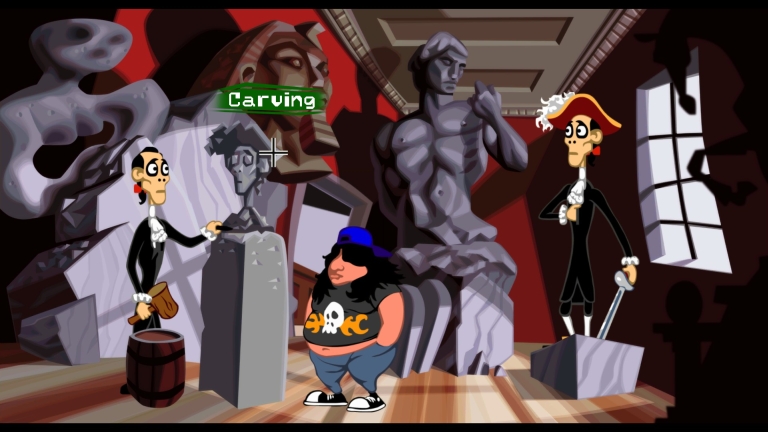 Much like last year’s treatment with Grim Fandango, Double Fine have successfully restored one of the true classics of the adventure game world and it is glorious indeed. While not as deep and story-rich as last year’s offering, Day of the Tentacle more than makes up for it in humor, style, unique gameplay and a truckload of charm. So put on some Janet Jackson, travel back to an age where adventure games were king and enjoy the ride. Now to begin the wait for Full Throttle Remastered next year…