It’s not difficult to see why Bandai Namco would want to expand into the free-to-play mobile game space when you consider the massive success of Fallout Shelter. Bethesda released the game last year in the lead up to its highly anticipated Fallout 4. The developer seemingly put it out on a lark, expecting it to be a fun, casual way to get players talking about Fallout again before the launch of its big, traditional game in the fall. But on its first day, it shot up to the #3 spot on the highest grossing games list on Apple’s iOS App Store. Within a month, it had earned $5.1 million in microtransactions.

Slashy Souls is meant to be a light teaser for Bandai Namco’s upcoming Dark Souls III. It’s a free-to-play game for iOS and Android that tasks you with outrunning a forever-encroaching black fog. Enemies stand in your way, as well as traps, forks in the path and other hazards. Every once in a while you’ll see a familiar Dark Souls boss like Gravelord Nito or the Armored Tusk, but functionally they’re just enemies with extra health. You can pick up little score gems or weapon upgrades, but nothing really persists between runs. You tap to attack and can swipe in different directions to jump, roll or sidestep. And that’s pretty much all there is to Slashy Souls. It’s a simplistic game you’ll probably get tired of within a few minutes. 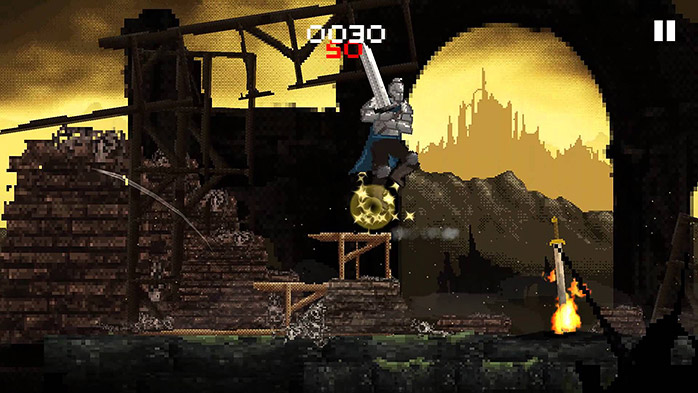 “Simplistic” isn’t inherently a bad thing, especially when you’re talking about a mobile game; often the best games for your phone are the ones that require the least from you, or at least restrain themselves to a core set of mechanics and resist the urge to layer on too many mechanics beyond the initial. But if the core mechanics aren’t strong on their own, “simplistic” can work to a game’s detriment if not done right, and that’s where we are with Slashy Souls: it’s just not fun at all.

From the jump, Slashy Souls gives off a cheap, dispassionate vibe. There’s no introduction or tutorial, simply a start screen with a GameStop logo and a call to pre-order Dark Souls III; you tap to start a run and off you go. The length of any given run is going to depend, of course, on your performance. The game is generous with the amount of health it gives you, which is good because there’s a real lack of nuance to the controls that makes it hard to play effectively the way you’d expect from a game with “Souls” in the title. The swipe system isn’t precise enough for much finesse in your play style, and the game doesn’t ever demand you develop any, either. If Slashy Souls slowed down its pace and devoted a bit more time to each enemy encounter, giving the player a shield and demanding that you learn when block, dodge or perhaps even parry with an action like tapping on the enemy as they attack, the game might’ve had some real depth to chew on. 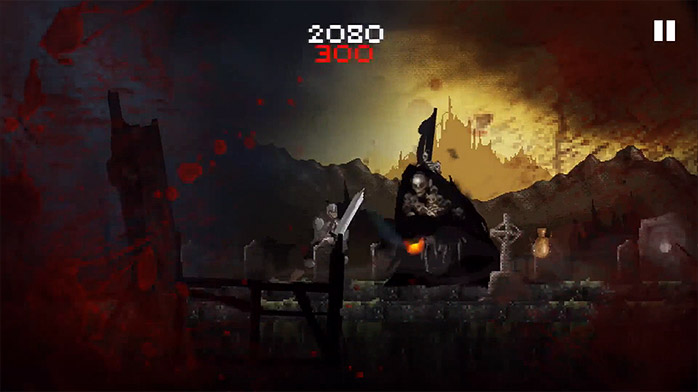 Really, the entire concept of Slashy Souls is about as antithetical to the source material as it gets. Dark Souls is all about playing carefully and punishing those who rush forward blindly. It’s about learning the timing of your attacks, not just spamming them, and where every enemy presents a significant risk. Of course, much of the Dark Souls formula isn’t going to translate well to an endless runner game, but Slashy Souls doesn’t even bother trying to adapt the parts that would, like the infamous corpse run. In Dark Souls, whenever you die, you drop your souls, which function as currency and experience points, so it’s a big deal that the game offers you one chance to go pick them up again. In Slashy Souls, you collect little white orbs that look a little like souls, but when you die, you don’t drop them and have to try to pick them up on your next run; they simply get added to your score total and your next run is disconnected.

It’s a shame that Slashy Souls is so shallow and one-note because the idea behind the mobile game spinoff to act as a warmup for a full game later is actually a fantastic idea. Fallout Shelter proved itself as a quality standalone experience worth devoting some time into and it’d be great to see more developers take chances with their franchises like that. But while Fallout Shelter is the current poster boy for that marketing strategy done right, Slashy Souls presents a perfect example of the concept done wrong. It’s a soulless cash-in and nothing more.