It’s hard to imagine that LEGO Star Wars launched over a decade ago. It was this game that made Traveller’s Tales into the blockbuster studio they are today. Since then, the studio has worked on numerous different franchises including Marvel, Indiana Jones, Pirates of the Caribbean and The Lord of the Rings among others. Still, the LEGO Star Wars games remain a favorite among fans, and Traveller’s Tales is finally revisiting the franchise that made them famous.

Traveller’s Tales, like the Empire, is striking back with LEGO Star Wars: The Force Awakens, a LEGO take on Episode VII. I recently got to go hands-on with the game at GDC 2016 to see if this latest take on the Star Wars universe is a worthy successor to the three prior LEGO Star Wars titles. 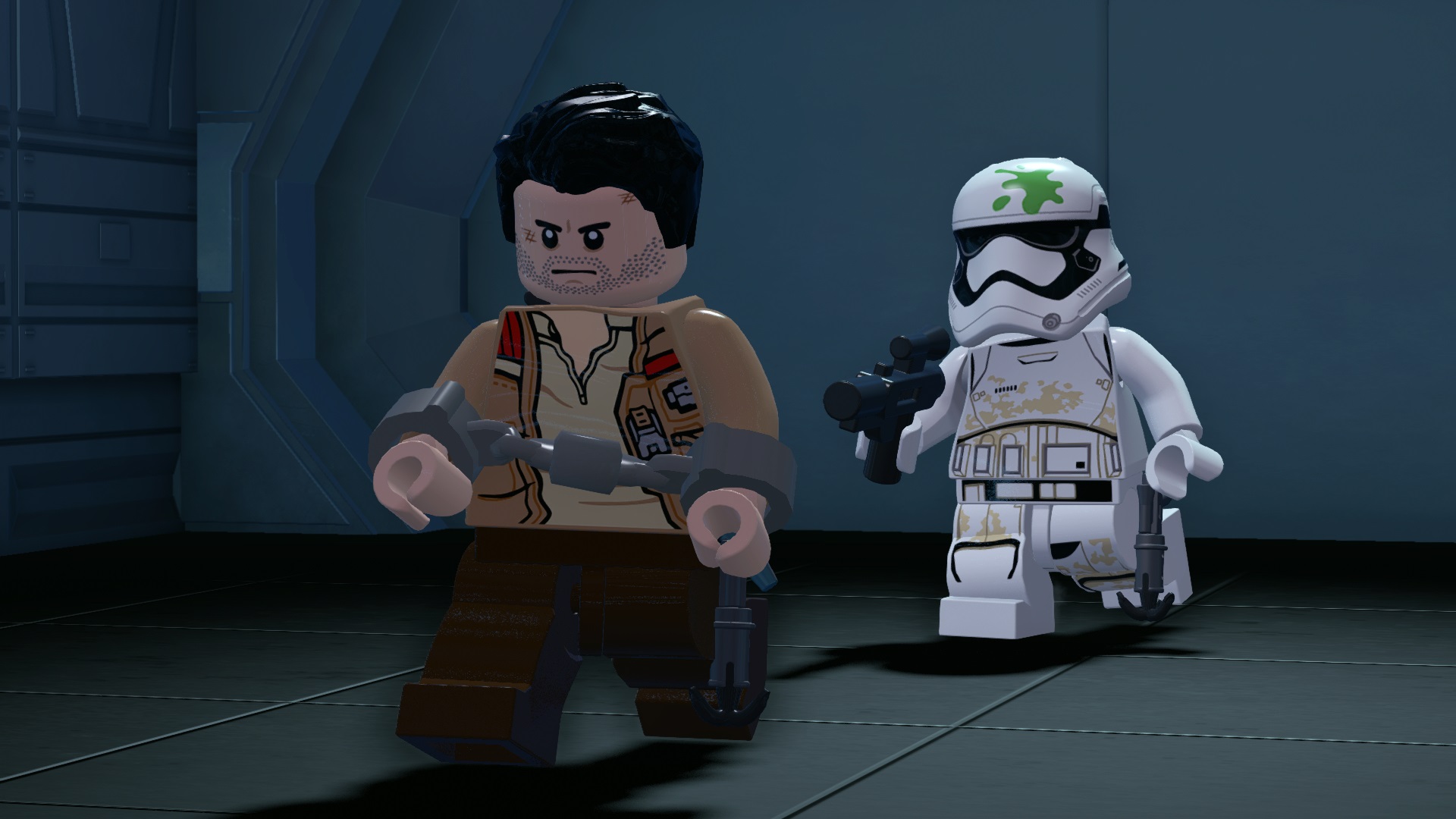 LEGO Star Wars: The Force Awakens contains eighteen levels; eleven of which are based on the film and seven that are entirely new and cover the events in-between Return of the Jedi and The Force Awakens. There is a total of five hub-worlds: Jakku, Takodana, Starkiller Base, D’Qar and the Millenium Falcon. Over 200 hundred characters will be playable, including characters from Return of the Jedi and The Force Awakens. It wasn’t confirmed, but Traveller’s Tales did hint that fan favorites from Episodes I-V will also be playable. Finally, there are over forty playable vehicles. We won’t be able to tell if there’s enough content till the full game launches, but these numbers will, at least, alleviate some concern.

I played three levels in the demo, each showcasing new gameplay mechanics and taking place on Jakku. The first took place towards the beginning of the film. Rey, in her scavenging uniform, must rescue BB-8 from a band of scavengers. For the most part, combat is similar to previous LEGO games. You’ll hammer the Square button and occasionally press Circle to perform a finishing move on weakened enemies. The Force Awakens doesn’t innovate much in that respect but does in others. The AI has been given an update, allowing them to build objects with LEGOs.

After dispatching my enemies, I had to figure out a way to knock the leader off his rideable beast. This was the introduction to multi-builds. Certain groups of bricks can be assembled into multiple builds. For this section, I needed to assemble something that could scare the beast, which turned out to be a mouse droid. These multi-builds play into the game’s many puzzles. While traveling through the Star Destroyer, Rey had to use multiple different builds to open a door. At first, she needed to create a machine that would create a pathway for BB-8 to get to her. She then had to destroy that machine to build the next machine for BB-8 who would then use it to open the door, ending the first level. 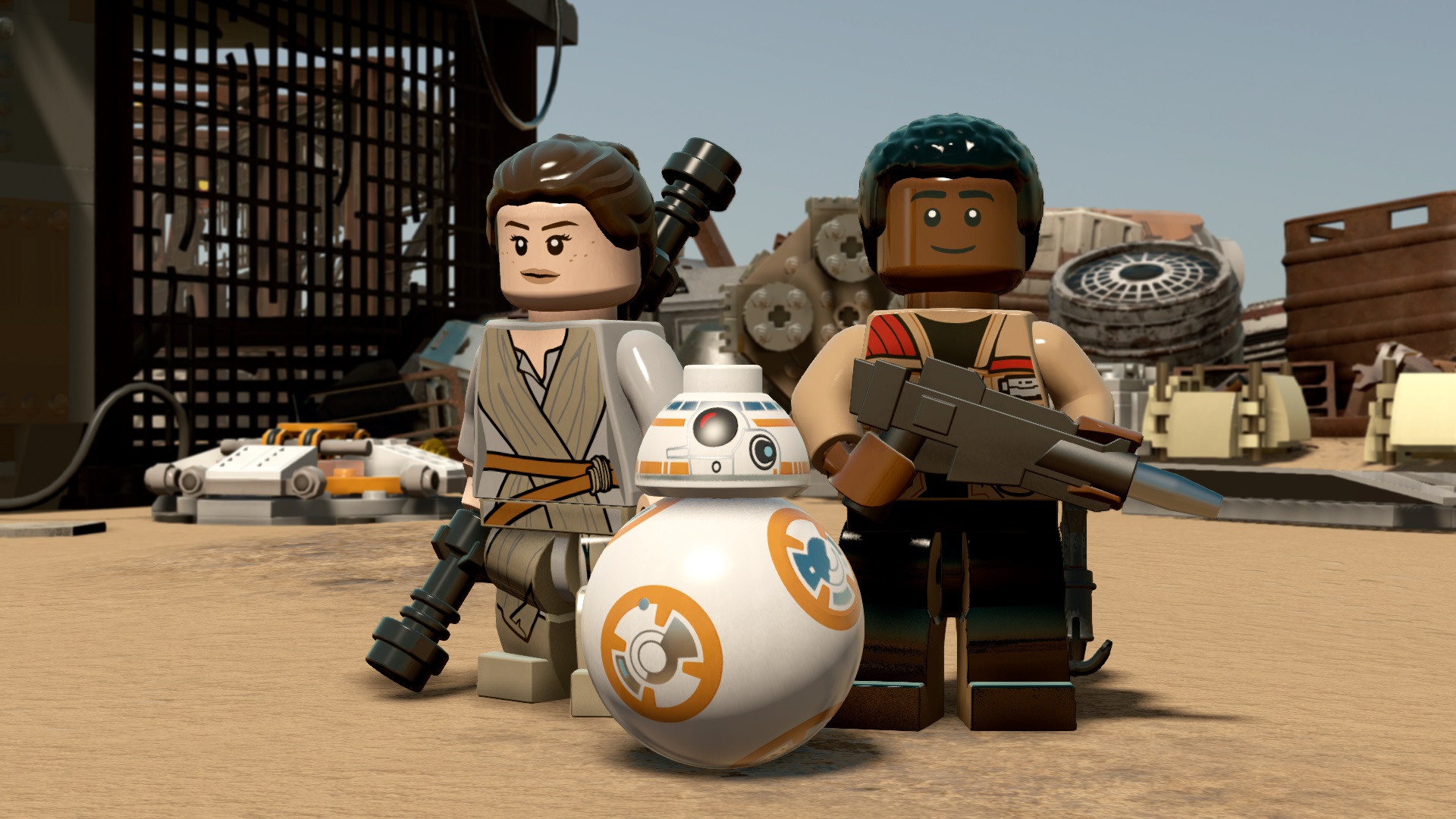 The second level took place at the Scavenger Outpost where Rey, Finn and BB-8 have to escape an Imperial attack. Here I was introduced to the second new gameplay mechanic, blaster battles. At certain points in LEGO Star Wars: The Force Awakens, enemy blasterfire can become seriously intense. Players will be able to take cover behind objects. Of course, this works both ways with enemies being able to take cover.

The final level picked up right after the events of the Scavenger Outpost when Finn and Rey find the Millennium Falcon. This was a vehicle-focused level, allowing players to pilot the classic ship. At first, the level played out on-rails, like a traditional vehicle section in a LEGO game. Everything was flipped on its head halfway through the level. New arena-based flight sections allow players to fly ships in a 360-degree space. It was exhilarating guiding the Falcon through the arena, shooting down Tie Fighters.

LEGO Star Wars: The Force Awakens looks good though is not a huge improvement over previous LEGO games. Like most recent titles, the game is launching on last-gen platforms and is therefore held back. While the visuals may not stun, the audio does. Traveller’s Tales puts John William’s fantastic score to excellent use, pairing the action to the different tracks perfectly. What’s more impressive is that Traveller’s isn’t just ripping dialogue from the film, they’re actually getting brand new dialogue from the original actors. Main star Daisy Ridley (Rey), John Boyega (Finn) and Oscar Isaac (Poe Dameron) all reprise their roles. Traveller’s Tales did not confirm, however, whether any other stars will return. 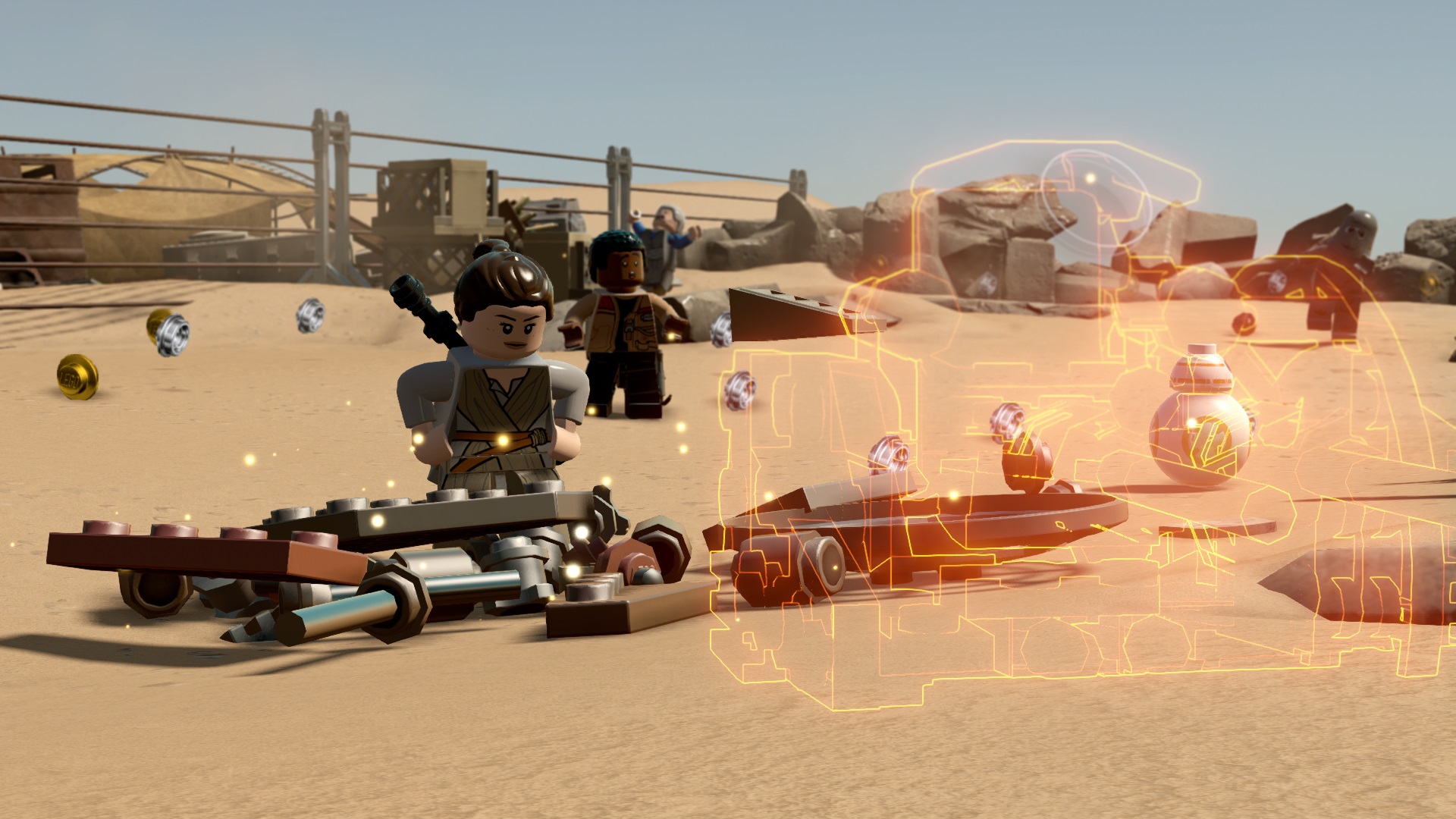 In our review of the latest LEGO game, LEGO Marvel’s Avengers, we were especially critical of the game’s lack of innovation. Traveller’s Tales has been developing LEGO games for so long that by the time Avengers came around the formula was beginning to get stale. LEGO Star Wars: The Force Awakens does bring some new gameplay mechanics, though it’s difficult to say whether they’ll be enough. I only encountered multi-builds a few times throughout the levels and there was only one blaster battle in the second level. Whether or not these mechanics will add the innovation the franchise so sorely needs remains to be seen.

Traveller’s Tales is back with the franchise we all fell in love with. It’s exciting to see them working on another LEGO Star Wars. Though the game only comes with one film, it appears that there will be enough content in the package. It’s tough to tell whether there’s enough innovation here, but Traveller’s Tales is trying with some new mechanics. It’ll be exciting to see how the final product turns out. LEGO Star Wars: The Force Awakens is out June 28 on PS4, Xbox One, PC, Wii U, PS3, Xbox 360, 3DS and PS Vita.

Be sure to check out our interview with Traveller’s Tales.