Virtual reality is poised to become one of the biggest talking points in the game industry. With HTC Vive and Oculus Rift launching this spring, and PlayStation VR in the fall, it’s clear that VR is here for years to come. Vive and Oculus Rift are PC exclusive, and can harness the power of the latest and greatest CPUs and GPUs. That leaves the PlayStation VR in an awkward position. Connected to the weaker PS4 hardware, can PSVR deliver a solid VR experience? The answer? It really can.

Were were invited by Sony to try out the PSVR during GDC 2016 and came away quite impressed. Though the heaviest of the three headsets, Sony has managed to make the PSVR comfortable. Sony’s always been excellent when it comes to hardware design and this rings true with PSVR’s design.

What remains disappointing is the fact that Sony did not go the extra mile and develop new motion controllers. PS Move was by far the best motion controller of last-gen, being far more accurate and precise than the Wii-mote or Kinect, but times have changed. There are more accurate motion controllers coming out for Vive and Oculus and it’s a shame to see Sony try and retrofit older technology to work for something new. It’ll be up to the developers to make the most out of the Move.

Overall, we were impressed with the headset and think it will compete well with Vive and Oculus. What matters though are the games. Sony gave us hands-on time with a few titles, each unique in their own way.

Check out our impressions below: 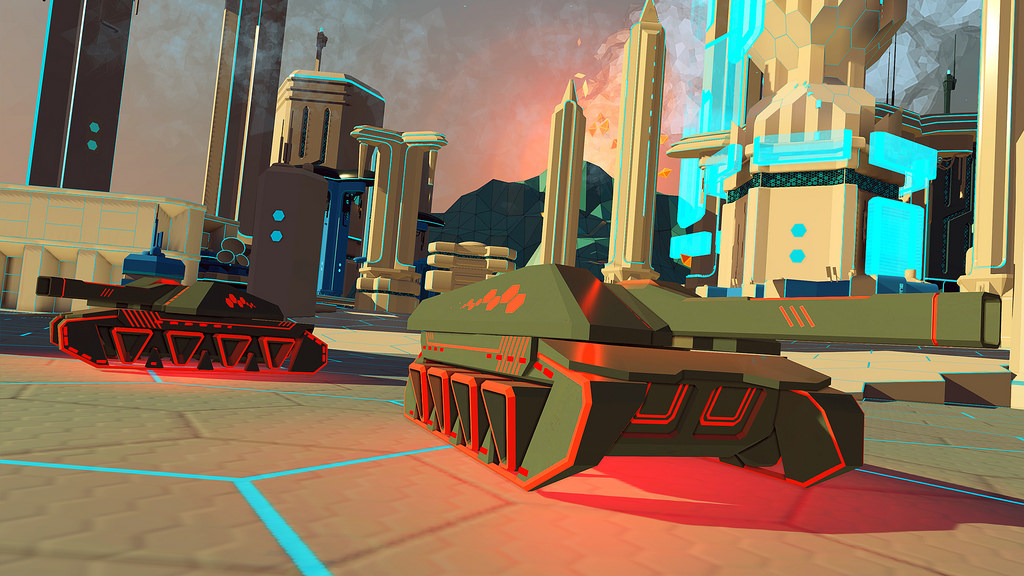 Battlezone resurrects the dormant franchise after THQ’s liquidation. Rebellion got their hands on the IP and are currently developing the game exclusively for PSVR. Battlezone plays out in first-person with PSVR giving players the illusion that they are actually in the tank.

Unlike Rigs (more on this later), Battlezone primarily plays like a traditional first-person shooter. You still use the left stick to move and the triggers to shoot, but aiming is not handled with head movements like Rigs. Like a traditional first-person shooter, aiming is all handled with the right stick, and head movement is used to look around and observe the environment.

Honestly, this control scheme might be the best way to utilize VR for competitive first-person games. The stick is always going to be easier and faster to aim with, and the head movement gives players the peripheral vision they’re missing in non-VR games. Battlezone feels like a perfect blend of traditional and new.

Visually, the game looks and runs well. Despite the weaker PS4 hardware, Battlezone handles smoothly and looks good while doing so. Enemies explode when you destroy them and there’s enough variety in the locations to keep things interesting. 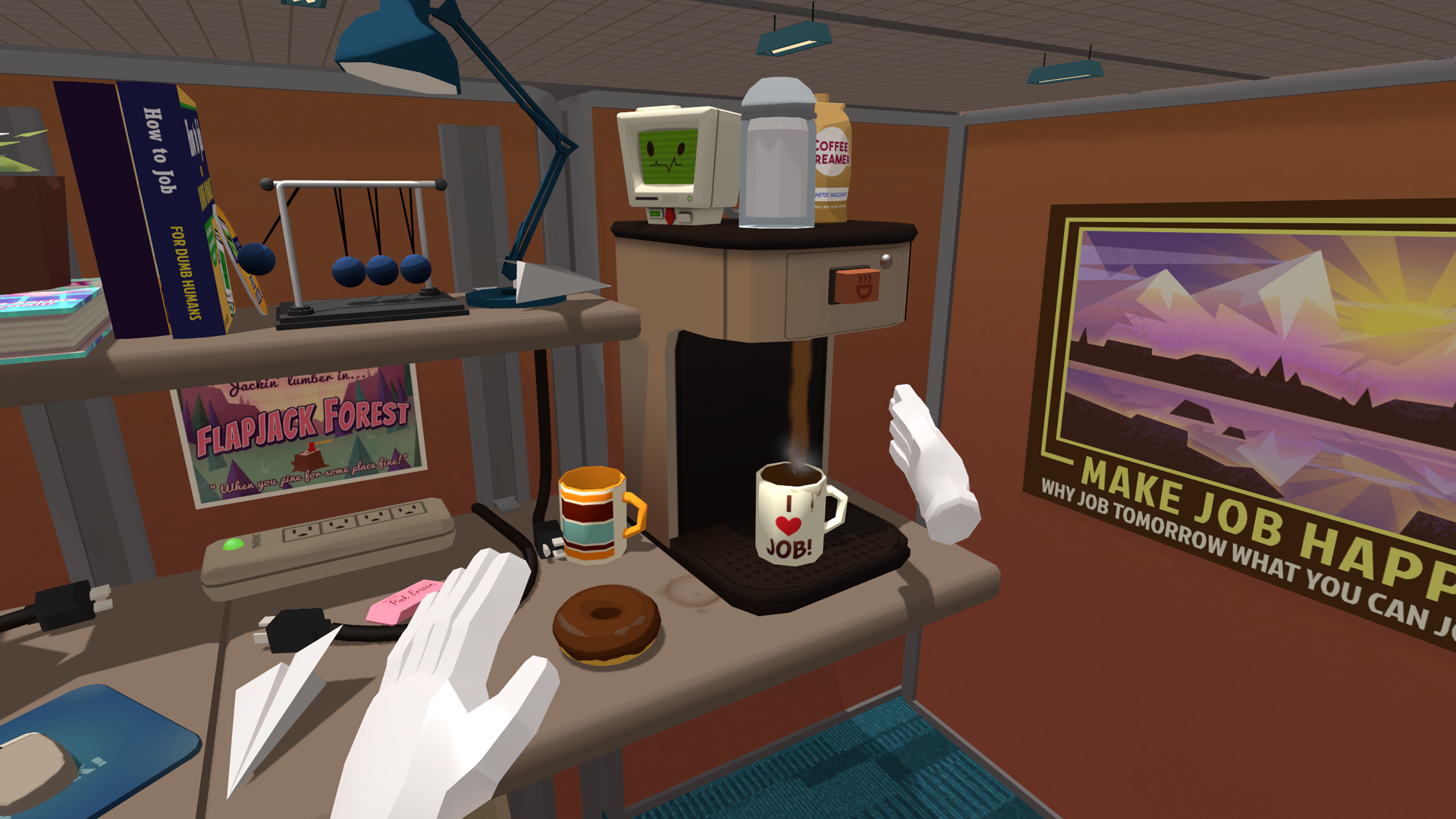 Video games transport us to fantastical worlds full of intrigue. Whether you want to be a suave secret agent or a musclebound warrior riding a dragon to save the world and get the girl, there’s a video game fantasy for you. But what about those of us who want to fantasize having a menial job? Thankfully that fantasy will soon become a reality thanks to Job Simulator, allowing Americans everywhere to come home from a tough day at the office and unwind in a virtual office.

Job Simulator is one of the most novel VR experiences yet, taking place in a world where human careers have been replaced by robots. It’s your job to take on the role of one of these robots and do menial tasks like making coffee, firing people, filling out TPS reports and much more. While you’ll spend much of your time in the office, there’s also simulations of other exciting careers like the fast-past world of convenience store clerks.

Considering the moniker of “virtual reality,” ironically Job Simulator is one of the most realistic forms of the technology yet. Let’s face it: it’s impossible to imagine yourself as a British gangster wiping out members of the rival mob with a machine gun, but making copies isn’t too far fetched. You might just forget that you’re playing a game at all. Oh, and remember: next Friday…is Hawaiian shirt day. So, you know, if you want to, go ahead and wear a Hawaiian shirt and jeans. 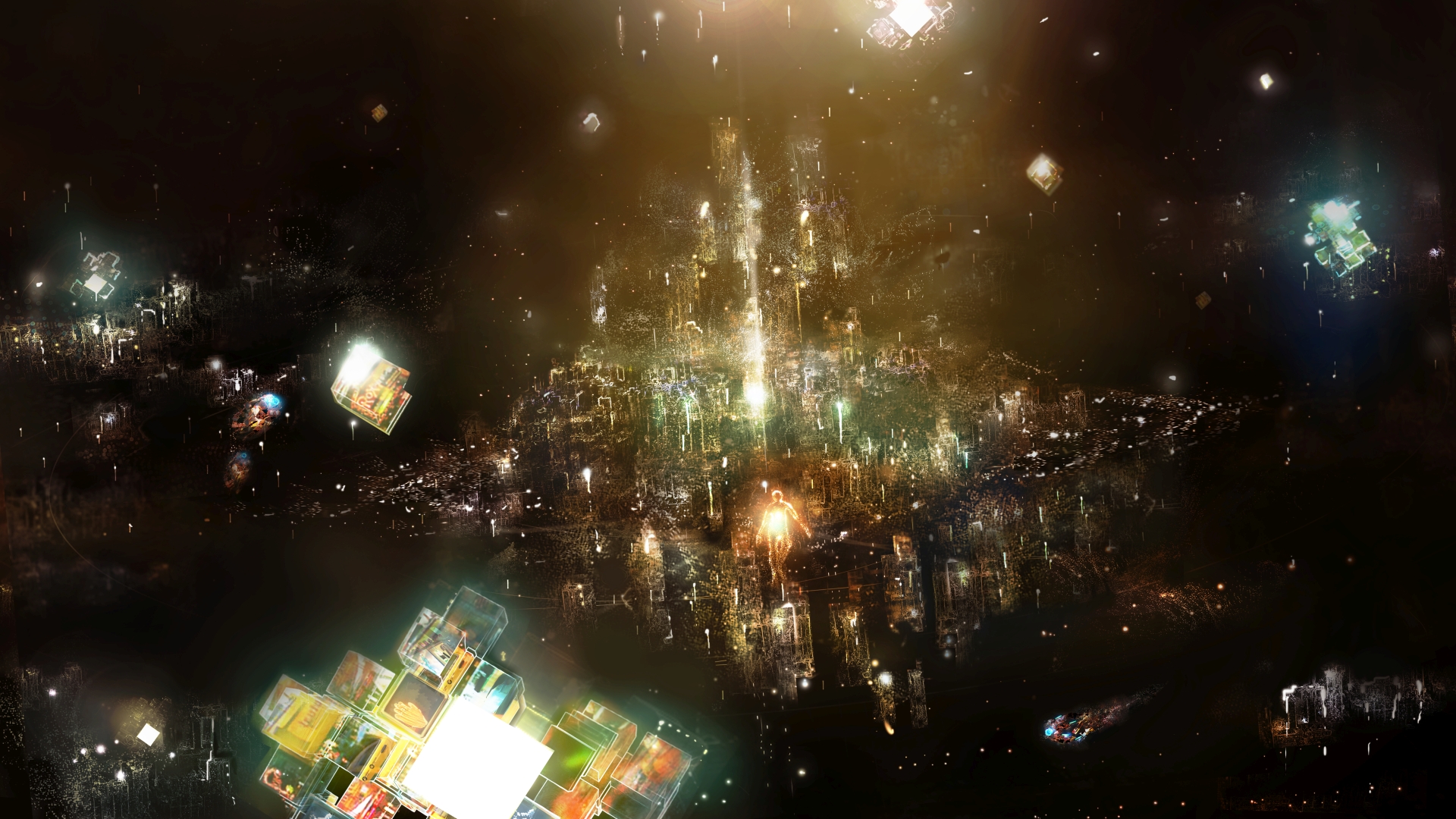 While Rez has always been a uniquely personal experience, strapping on a headset, cranking up headphones and letting the darkness and bright lights envelop you truly makes you feel closer to Synesthesia than ever before. It’s easy to zone out and get peacefully lost in the game, like some sort of trip inside of Tron. Given that most VR experiences are all about explosions, it’s nice to experience the technology in a more relaxing way. 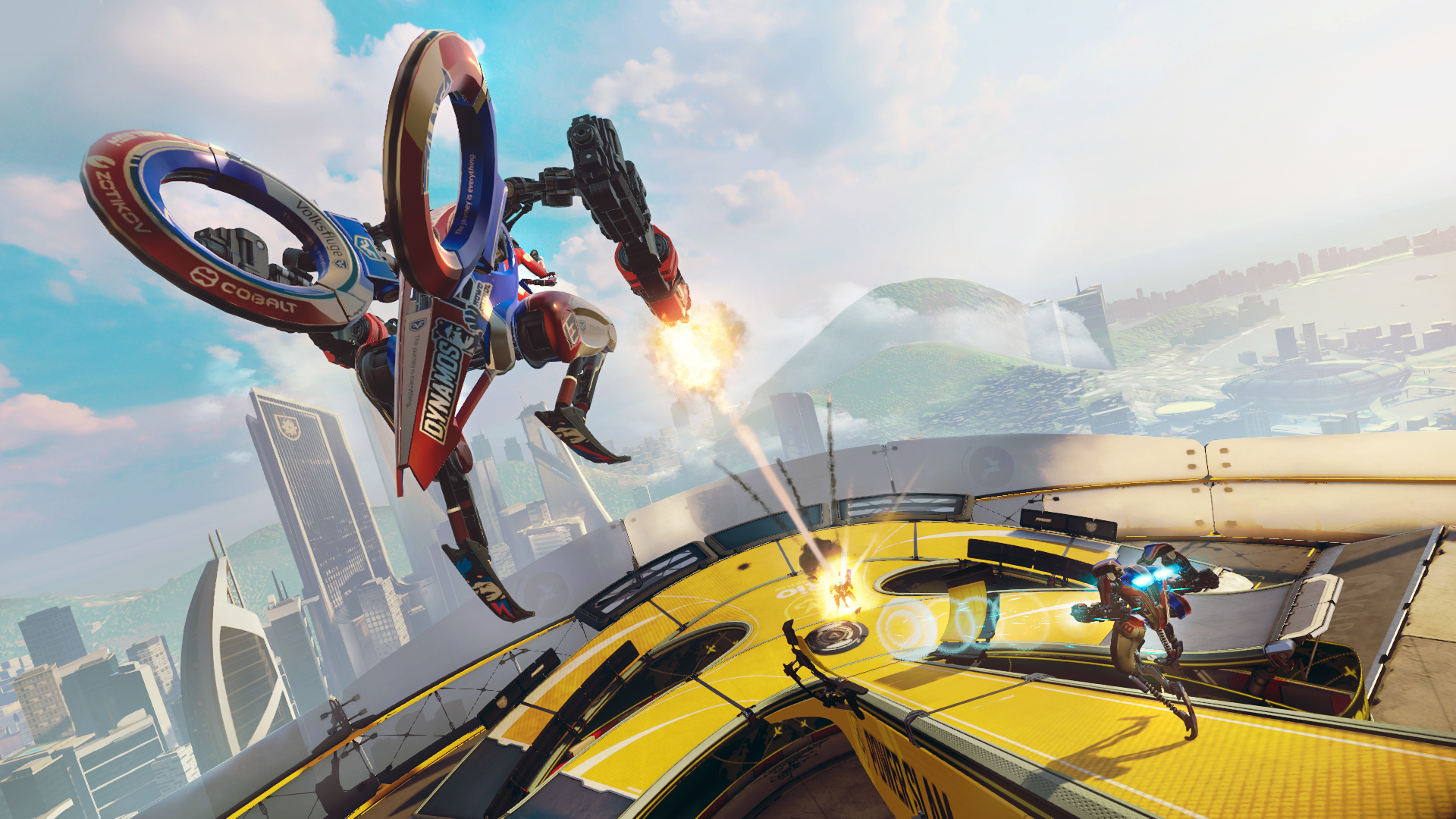 Rigs is the other competitive first-person shooter game we tested out on PSVR. Developed by Guerilla Cambridge (Killzone: Mercenary), there are some high expectations. Rigs, for the most part, manages to reach those expectations.

The game was clearly developed with eSports in mind. Players participate in 3vs3 team-oriented game modes. Each player can equip different mechs, each with unique abilities. For our demo, we were placed in a mech that could double-jump and reach higher platforms. He also came equipped with dual machine guns, each controlled by R2 and L2.

As mentioned above, Rigs makes a big change to the traditional first-person shooter control scheme. Rather than aiming with the right stick, players will need to aim with their head. Doing this does increase the sense of immersion, but doesn’t feel as precise or as intuitive as just aiming. If it wasn’t for the generous auto-aim, it’s unclear how accurate movement-based aiming would actually be.

Still, it’s hard to deny how fun Rigs can be. When teams gel well and both sides are competitive, Rigs delivers all the thrills of a competitive shooter. It’s also quite the graphical showcase for the PSVR. Out of all the demos we saw on PSVR, Rigs was easily the prettiest, carrying a consistent framerate. 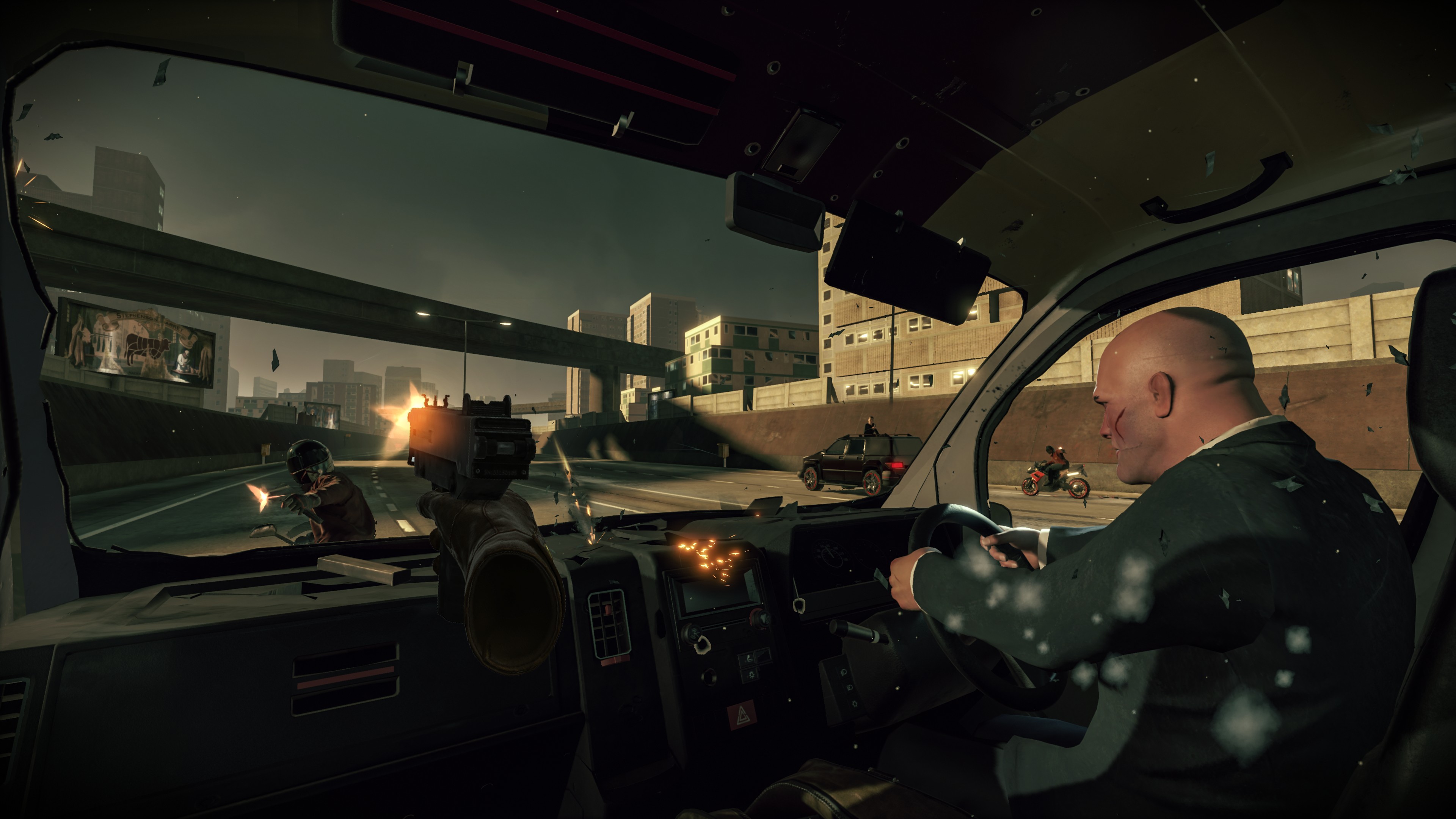 The London Heist was more of a tech demo than an actual game, giving the opportunity to test out the PS Move controllers. The demo puts you in a getaway van and shows just how immersive PSVR can be. With the Move controllers representing hands, you’re able to pick up and play with any object. You can use the radio to play music, switch stations and change the volume. Random items can be picked up and thrown. You can even tilt your head out of the window and listen to the wind.

Of course, the demo wasn’t just about showing off immersion, but also showing off some shooting. Enemies quickly catch up and your partner throws you a Uzi sub-machine gun. From here you use the right Move controller to aim and shoot. When ammo depletes,  any of the magazines strewn throughout the van can be picked up with the left Move controller and jammed into the gun.

The London Heist was surprisingly fun, and I could see how something like this could be implemented into standard games. Many first-person shooter campaigns feature some form of on-rail sections, whether it be firing from a vehicl  or manning a turret. Allowing players to play these sections in VR would actually be neat.

The London Heist isn’t a graphical showcase for PSVR. Geometry is simple and the highway the van careened down is devoid of life. There just wasn’t much happening.