It’s cold up north.  The snow piles up on the pine trees and the long winter nights are best dealt with inside by the fire, or if there’s an unavoidable need to go outside, by wrapping in roughly 2-300 layers of clothing and hoping it will do.  It’s enough to make a girl long for the albatrosses of summer, lying on a sandy beach while they fly majestically through the sky, or glide, or flail, or whatever it is an albatross does.  The young girl in Summer Catchers is ready to see the world, or at least it’s warmer parts, and to do that she’ll need to drive her wooden go-cart out of the endless woods.  Only after doing the residents of the forest a few favors, of course.

Summer Catchers is an endless runner that popped up on Greenlight and it’s a lovely and strange little thing.  A helpful wolf woodcutter has provided the girl with a little wooden cart and sells a few tools to get past the hazards of the forest, and the demo contains five mini-quests plus a couple of events to give a taste of the strangeness ahead.  The gameplay involves the cart bouncing over the snowy terrain, and you avoid obstacles such as snow piles or pits of jagged ice shards by deploying single-use items like the bumper or big bouncy tires.  You buy a stock of what you think you’ll need at the wolf’s store before heading out, and deploy them from a random selection of three at any time. Maybe you’ll have three snowplows available, or maybe a rocket and a bouncy tire when what you really want is a seed to plant a tree, but if you can keep the run together long enough the right tool will come into rotation eventually. 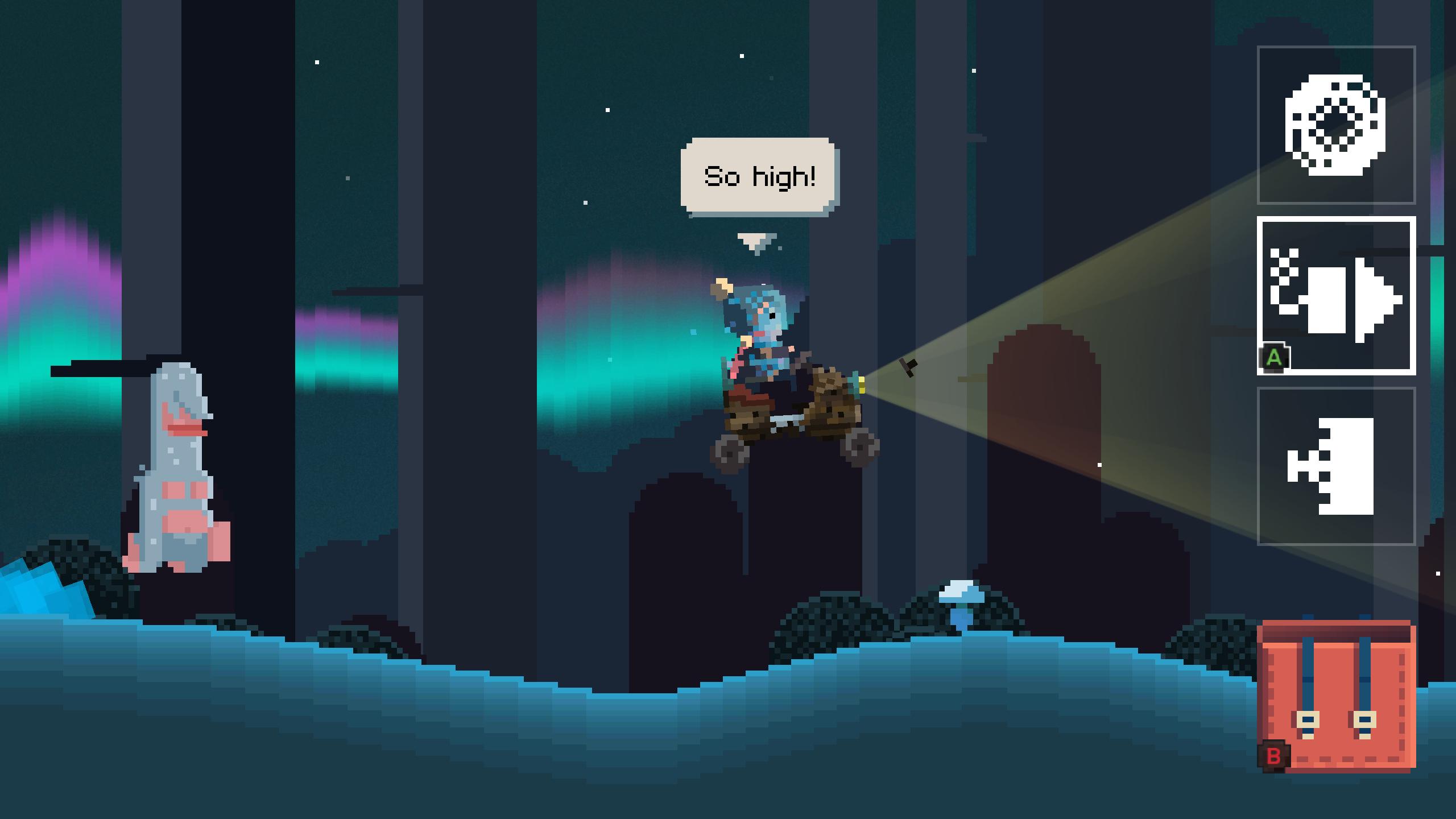 Some obstacles can be cleared by a couple of items, such as snow piles that can be bounced over with the tires or burst through with the snowplow, while others require a specific tool to get past.  Use the wrong item or simply don’t have anything suitable available and you take a hit, with the cart only able to take three shots before it breaks.  Honestly, it’s a bit simple and the randomness of the items can be very unhelpful, especially when you need to waste a tool on the hope that the one that replaces it will maybe be the right one while every item used costs money to replace, but then Summer Catchers pulls out a weird event or at least a charming piece of animation to make it all better.  Driving along keeping an eye out for the next goal or obstacle only to have the run take a short break as a shadowy giant walks by in the background is the kind of thing that makes it easy to forgive a little gameplay simplicity.

The Summer Catchers Greenlight demo is an instant charmer, with a lot of life in its pixely animations.  The atmosphere of the forest and possibility of a new bit of story weirdness makes it easy to try another run and the character animations are wonderfully endearing.  Watching the girl slide to a stop after the cart crashes, gently spinning on her head the whole time, or the polite cough she makes at the start of the story when the wolf is too caught up in his work to notice her, do more for her personality than whole blocks of text could ever hope to accomplish.  The Summer Catchers demo is maybe a little simple, but its world and characters are ones I was left wanting to see more of.  The albatrosses of summer fly over the summer oceans on the other side of the forest and with a little luck and the right tools the cart might just hold together long enough to for the girl to see if they’re as majestic as she dreams them to be.