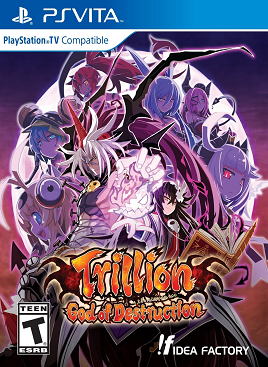 Earning the moniker “God of Destruction” isn’t a task to take lightly. It requires hard work, dedication and more than a little gumption to be bestowed with this most hallowed of titles. Trillion, the villain of Compile Heart and Idea Factory’s latest PlayStation Vita title, figured out a rather darn good method. Yes, literally eating Hell certainly wins the right to the title and that is precisely what this beast did. Long ago, he devoured the Underworld, using the core as a maraschino cherry. Satan, the original ruler of the Underworld, sacrificed his soul to create a new core, reinvigorating the land.

Much much later, Trillion has decided to return. Bursting through the gates, the monster begins treating perdition as one giant Golden Corral. Zeabolos, Satan’s grandson and current ruler of the Underworld, rushes to the fight. After witnessing the death of his brother, Z-bo is promptly defeated. Before dying, he is rescued by an enigmatic young looking woman who goes by the name of Faust. In exchange for his soul, she will help him defeat the compulsive competitive eater. As Zeabolo’s body didn’t exactly fare well from the encounter, it now falls on his underlings to defeat the monster to save hell. In exchange for defeating the monster, the victor will gain the throne of the underworld. It’s not like Zeabolos will be using it when this is done.

The set up is engrossing. Introduce a baddie, pick a warrior and proceed to train them to beat their head against a foe with a trillion hit points until one falls or the monster reaches his goal. There are tons of moving parts and systems to engage with, close to a dozen endings to experience and the title has the potential to devour hours much like the villain does the landscape. The effort put into the plot and systems is appreciated, which is why I was so aggravated to find myself despising the experience at first. The primary goal of the game is to win the battle against Trillion. The problem is that the actual battle controls are poorly implemented. Using the common rogue-like method of “turn-based but everything goes when the player does” is fine. Actually inputting the commands is the difficulty. 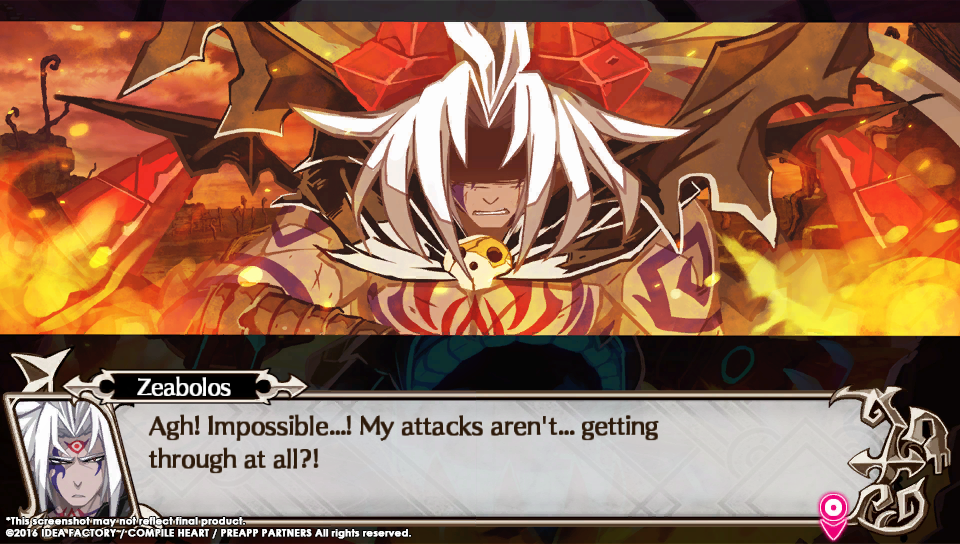 The battle takes place on a grid, with it being possible to move or attack in eight directions. In order to move diagonally, the player must first turn the camera using the shoulder buttons. Want to use the left stick to move, negating the need to mess with the camera ? Well, that’s used as a shortcut for bringing up the skills menu. This can be accepted, as using the directional pad reduces the chance of taking accidental steps. The camera control, however, is completely unintuitive. Using the right stick to pan the camera would have made the proceedings much slicker. but instead, the shoulder buttons are used to move the camera along the X axis. Changing the Y axis placement requires pressing the two shoulder buttons and the square button simultaneously. Even after getting into the groove, the goal of the game, battling Trillion, feels less like playing the game and more like playing the interface.

The game did grow on me, however. Those familiar with Compile Heart’s Hyperdimension Neptunia series have a good idea what to expect in regards to the tone. Despite taking place in Hell with the prospect of mass annihilation looming, everything here has been battered with the cute stick. While this may be grating to some, the lighthearted writing elevates the title. The juxtaposition of the bright cheeriness with the woeful themes gives everything a unique flavor. A bit nutty, a bit chewy, it’s an acquired but satisfying taste. That said, there is a reason that no other story moments are being mentioned past the start. It would be no fun to give away what game has in store. 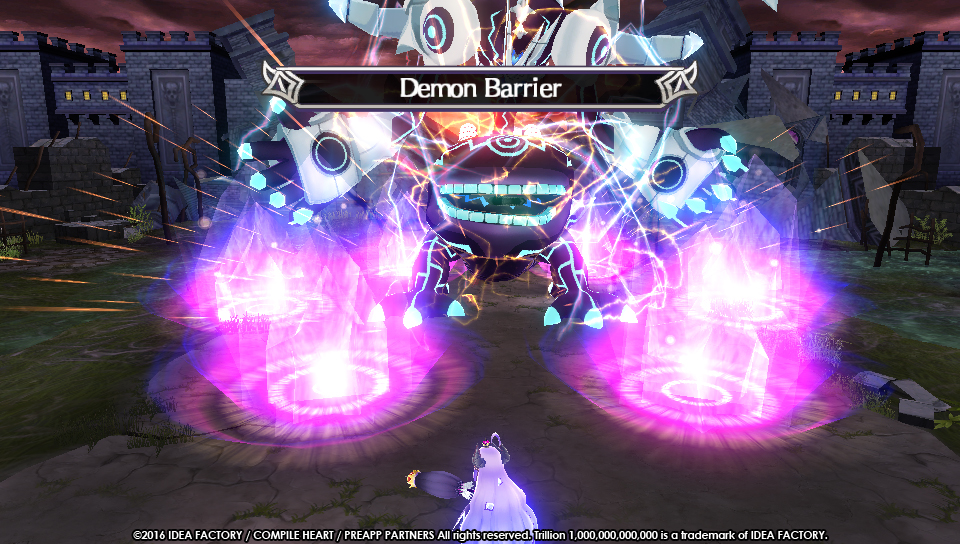 The tone leads into the mechanics of the game. While the goal is to vanquish the apocalyptic god, being able to do so requires massive amounts of preparation. So, the player takes the chosen underling and proceeds to train her. This is done by subjecting her to sessions that earn her experience points across many specific categories. The points can then be spent to level up the character’s stats, purchase passive skills, and open up and strengthen new types of spells and attacks. One has to be careful not to push the heroine too far. A fatigue bar is always present. Should the trainee become too worn out, she will be unable to work for three days. It’s smarter to just give her a day off every once in a while.

These training sessions also earn medals. Once five have been accrued, the player may then take the underling to the Valley of Swords.  This area is basically a micro-dungeon where the player can kill small enemies for more XP, and bash open treasure chests for much needed equipment and items. The dungeon must be cleared within a certain amount of moves. Failure to do so forfeits the winnings.

There is also a need to woo the heroine and build up Affection Points. This is done by spending time with her, giving the correct gifts, and making the right choice during certain points in the story. These points are vital in the fight against Trillion. While the character has her own health and magic bar, the points in the affection bar is used first. It acts as a shared pool of life and magic points. Only when this runs out does the player start spending the heroine’s actual magic points. It’s not a smart idea to blow through the affection bar, though. While there are still affection points, the heroine can escape the battle to fight another day. When these are all gone, it’s win or die. Dying means having to start with a new heroine, picking up where the previous left off in training. 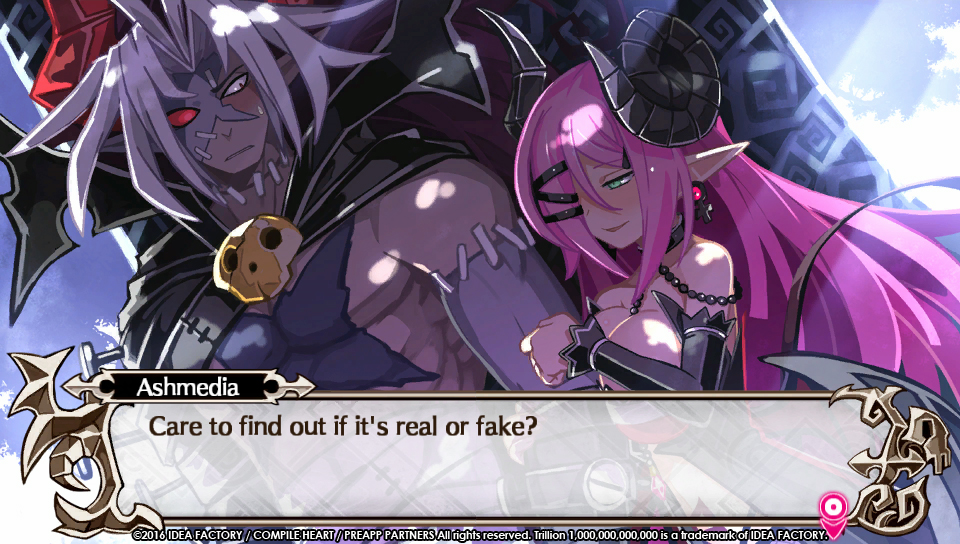 The heroine does not have to battle alone. She can also bring a limited number of familiars into the fight. There are four types of these: close, ranged, support, and tank. The amount of helpers that can be brought it is dictated by the heroine’s charisma stat, but they make the fighting much more palatable. Instead of needing to constantly pay attention to the trash mobs that Trillion spawns, the player can spend more time dishing out direct damage to the monster.

All of these systems really come together well. It’s certainly different. It’s also very entertaining. The game features various strategies the can be implemented in a way that breaks the game in a really fun way. For example: would it be better to spend more points on the charisma stat to bring in more minions, or concentrate on area of affect skills that wipe out the trash mobs quickly? Each enemy that is killed grants a free turn in battle, so throwing down a spell could mean three or four extra hits to Trillion’s tail. Spending the Affection Points, however, might mean that the next hit pushes the player past the point of no return. Playing with these choices yields so many differing solutions that I don’t believe that I have even come close to discovering all of the ways one can triumph. 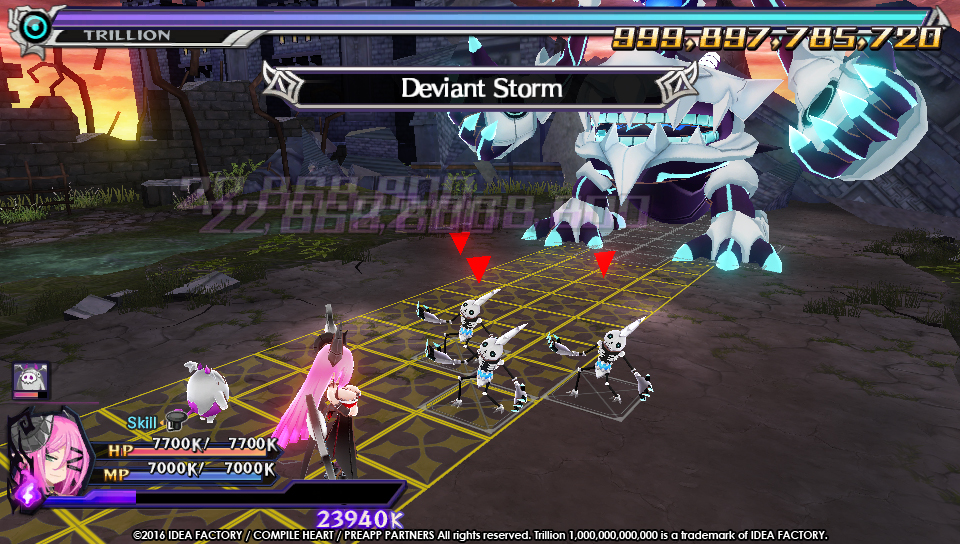 After making a terrible first impression, Trillion: God of Destruction manages to be a unique experience. It’s filled to the brim with strategic options, loot to equip and ways to upgrade. Despite spanning so many various genres, this title comes together to form a cohesive whole. The design of the systems work in such a way that it can support both marathon sessions and a quick pick up to build just a bit more. While the controls are set up in an obnoxious way, the feeling of beating Mokujin, the training dummy that lets players test their mettle outside of the real fight, is elating. If winning against the stand feels so good, imagine how it feels to defeat the actual God of Destruction.