For as much as the Souls games might look like a classic single-player experiences from the outside, they really have their own distinct brand of community-driven multiplayer. Each game releases with little workable information to players, leaving questions unanswered about how basic mechanics will work or what certain stats affect. Once the community gets its collective hands on the game, it starts to put together all the disparate little scraps of info into a clearer picture. As a result, the best time to get a Souls game is at launch, while players are still figuring everything out and piecing together the puzzle.

That’s exactly why Bandai Namco’s decision to stagger the release of Dark Souls III so frustrating.

Dark Souls III is out now in Japan. It’s been out, actually, having released on March 24. As I write this, Japanese players are currently combing through every part of the game, learning the new mechanics, finding the hidden secrets, developing the best strategies for the bosses and running into all the traps. They are streaming the game to thousands of eager players worldwide, all itching to get the game for themselves. For those players, the only option at the moment is to pay extra to import the Japanese version of the game, a route Bandai Namco itself doesn’t quite recommend as it admits this version of the game has been rushed to market; it’s missing optimizations from the day-one patch that will come to the worldwide release on April 12 and doesn’t even include multiplayer, a key component in the franchise.

In essence, even Japanese players are getting a gimped experience. 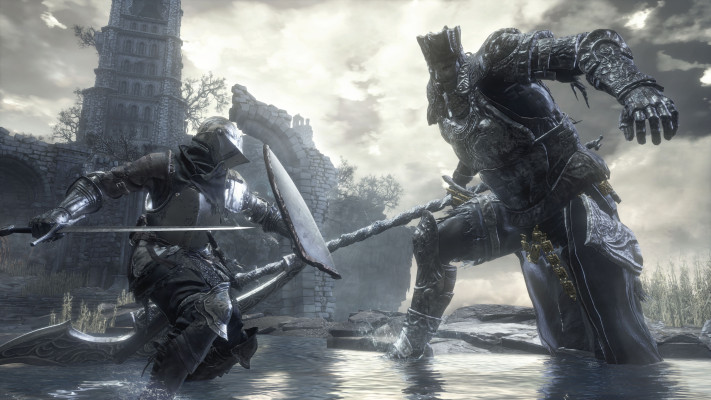 It makes you wonder why Bandai Namco would even bother releasing the game in Japan early when it admits the game is currently an unfinished product. No one wins in that scenario — except Bandai Namco, of course. Though it won’t confirm the exact reason for the staggered release, in all likelihood it is because Japan’s fiscal year runs through the end of March, and therefore the company will want the Japanese sales of Dark Souls III to boost its financial report. It sounds callous, but it’s a common practice for publishers to schedule games for release before a fiscal term ends in order to avoid underperforming or missing its financial projections, which could lower the company’s value in the eyes of shareholders. If you’re wondering why it’s such a big deal for publishers to delay a game or why it’s often preferable to rush a broken game to market rather than giving it more time, that’s it right there. For most games, it’s not a huge issue beyond the potential for a buggy release, but in this case, it’s a purely business-related decision that directly compromises the artistic vision.

Everyone is getting a raw deal here. Players in Japan are stuck with an unfinished game upon release that lacks both polish and the series’ trademark multiplayer. Players outside of Japan are stuck making tough decisions about whether they’d rather import the international version of the game or wait until the proper release on April 12. For those players, neither option is that appealing: With the former, they’re paying extra to import an unfinished version of the game just to get it early. With the latter, they’ll need to stay away from all the streams, guides, forum threads and inevitable revelations from the Japanese and import players; by the time they get their hands on the game, it is almost guaranteed that all but the most obscure secrets will have been mined.

There’s not really a great excuse for Bandai Namco to be releasing the game this way. The world is decidedly smaller than it was when Demon’s Souls released in Japan in February 2009, North America in October 2009 and the rest of the world by June 2010. We live in a global economy now more than ever where information and imports are as simple as paying a couple extra bucks for shipping from Amazon Japan. Bandai Namco’s decision to stagger the release of Dark Souls III is a slap in the face to Japanese players who will get a compromised release, worldwide players who will have nothing left to discover firsthand and will need to avoid spoilers for the three weeks, and to the developers at FromSoftware.