Ashly Burch, the voice actor for Chloe Price in developer Dontnod Entertainment’s Life Is Strange, believes that her character’s story arc is “so compelling and so beautiful.”

Making a special appearance on the Blackwell Podcast, which can be viewed below, Burch received a fan question asking her what the most beautiful lesson she’s personally taken away from working on Life Is Strange.

Burch, unsurprisingly, made sure that no stone was left unturned in her long, meaningful response about playing Chloe and the long-lasting impact that the character has had.

“Hmm… what a lovely question,” she said. “Um, I guess it’s that Chloe is inspiring to me because she’s gone through so much like I’ve said before and she’s lost so much. And at the end of the game, you know, even though she’s crying and even though she’s terrified [that] she’s literally willing to die, because she’s come to a place of acceptance with it and that’s, you know, despite — or maybe because of — all of the things she’s been through she finds the ultimate strength in herself to let go if that’s what Max wants her to do. 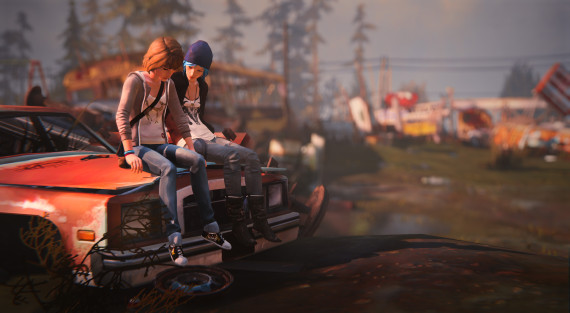 Max and Chloe at American Rust, Arcadia Bay’s junkyard, in Life Is Strange Episode 2: Out of Time.

“And that to me is so f*****g impossibly sad but also so brave and just so strong of her to come to that place after everything that she’s been through. And I think even though it’s such a harrowing choice and such a difficult ending kind of either way, it’s sort of the beauty, I think, of knowing that Chloe was not stuck in the angry, selfish angst that she started in. She changed and she grew to the point where she accepted the possibility that she needed to die for other people.

“And that to me, I think, is incredibly inspiring because I think (myself included) we often believe that we are shackled by the things we’ve been through, or the person that we use to be or the pain that we’re feeling now. And I think Chloe’s arc is so compelling and so beautiful because it is a reflection of the way that people can change and how trauma doesn’t keep us from becoming the people that we need to or want to be. It can embolden us actually to take the steps that we need to take, which is something that, you know, is important to me in my life and I find the ending — again, even though it’s impossibly sad — extremely inspiring for that reason.”

Life Is Strange, a five-part episodic adventure title from the developer behind 2013’s Remember Me, was released for PlayStation 4, Xbox One, PC, Xbox 360 and PlayStation 3.

Following on from its initial announcement in September 2015, Life Is Strange launched in Japan for PS4, PS3 and PC earlier this month.

Having amassed over one million in sales — at a time when the fourth episode, Dark Room, was yet to be released — Life Is Strange eventually made its way to the shelves of retail stores in North America and Europe in January 2016.

Life Is Strange Limited Edition, which was announced near the end of 2015, contains a 32-page art book, a disc-based version of Life Is Strange, director’s commentary and the official soundtrack.

Hardcore Gamer’s review for the whole of Life Is Strange suggested that the title “sets a new precedent for episodic gaming and reiterates why it’s a bona fide contender for 2015’s GOTY, despite facing fierce competition for that distinguished accolade.”

For more on Life Is Strange, check out our interview with Hannah Telle, our Collector’s Cabinet feature on the Limited Edition and our individual reviews for each episode in Dontnod’s title: