It’s rare that a game asks the player to make a sacrifice. It is even more seldom that a game forces that sacrifice upon the player. I’m not talking about story elements that has the character making sacrifices; I’m talking about the player having to do so. Whether it be an in-game item, time or any form of negative effect in the face of small and/or delayed personal gain.

This thought was prompted by the recent release of Tom Clancy’s The Division. In the initial days of said release, players experienced a bug in the opening mission that partially stopped them from progressing. The bug included a laptop in a safe-house online lobby environment that needed to be accessed by the player in order to move the mission forward. With the launch being a popular one, the safe-house was filled with players all trying to complete the mission at the same time. Adding the collision mechanics which don’t allow for two characters to occupy the same space, along with the laptop’s inability to be accessed by more than one person simultaneously and the various components caused huge pile ups and delays for thousands of players around the world. Eventually, players began organizing queues among themselves in order to access the laptop one by one and eventually succeed in the mission task.

I personally had this experience during my first moments of The Division. Between bouts of bewildered frustration and impatience, I couldn’t help but wonder if the ‘bug’ was an intentional composition by the developers. As it turns out, it wasn’t, and the bug was promptly fixed in a patch.

The bug did serve to highlight a few interesting aspects in the makeup of the average gamer. While participating in the now infamous queues, The Division gave me the chance to observe my fellow players in a situation that was both new and strange to them. It seemed that as the minutes crawled by and the crowd ebbed and flowed, that the population could be identified and sorted into three groups. The first group, upon entering the safe-house, identified the issue, saw the solution presented in the form of a queue and joined the movement. Some waited patiently, others took the role of organizers, utilizing the chat function to direct people into the queue and to inform (often by berating) those who were not participating to do so. The third group were those who entered the safe-house, identified the issue and then proceeded to ignore everyone else as they attempted to push their way to the front of the line to access the laptop.

It only took two members of this group to delay many queues for dozens of minutes. I myself witnessed two such individuals (among many others of their ilk) spend at least ten minutes pushing into the front, only to reach the laptop at the same time. What commenced can only be described as sheer idiocy as the two, along with the legitimate first in line, proceeded to mash the interact button repeatedly, blocking themselves and each other from accessing the laptop for a ridiculous amount of time. 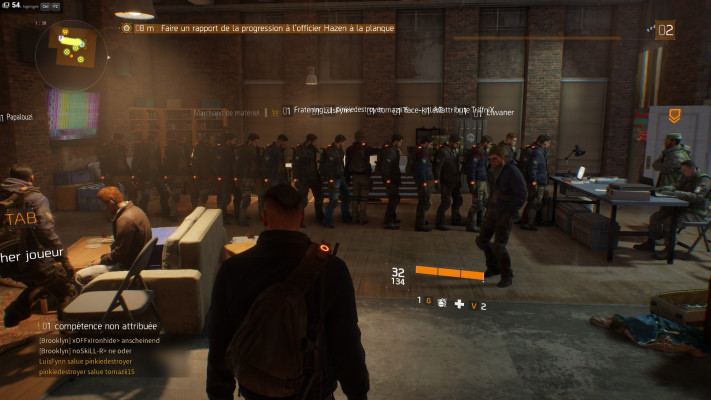 One player’s view of the infamous laptop queue

Essentially, the two groups can be defined as those who were willing to perhaps wait a little bit longer to ensure that themselves and others could proceed, and then those who were quite happy to be a detriment to others as they stubbornly furthered their own interests.

Imagine a game that forces two players to work together throughout a difficult sequence until they reach the final obstacle, only to discover that for one of them to progress, the other must voluntarily fail. To make the sacrifice more meaningful, once a player had succeeded with the sequence, that player could not return to the stage, ensuring that players are unable to return to help the other through.

Would it work? From the observations of an average gamer (myself), I’m not sure it would. In every lobby, every game, every round, there is a percentage of players (albeit a minority) who only aim to further their own goals. The quintessential example is that of a combat game in which the teams must capture areas or complete objectives. The majority of players will attempt to cooperate in the objective while others will ignore said objective to allow themselves to get kills with a reduced risk of death, ultimately dooming their side to defeat.

What about single player games? Is there a scenario in which we would ever choose to subject ourselves to some form of unpleasantness in order to progress the game in another direction? Is it ever possible that the majority will choose an option because it feels like something the character would do, rather than to get that cool shiny sword +1? Many games do have us choose between two things,choosing to leave one person to save the other, or losing one item to gain another. These don’t seem to fit with this whole idea of player sacrifice.

It seems as though our enjoyment is always gained by gain. We gain items, loot, numbers, scores, etc.  What about enjoyment through satisfaction? Satisfaction for a job well done, a selfless act, an in-character decision. Is this something that can have a place in gaming? I’m personally doubtful but I’d like to think so.