Traveller’s Tales made their mark on the gaming industry back in 2005 with Lego Star Wars, which followed the events of Episodes I-III, and now with a brand new trilogy on the way, they return to the franchise that put them on the map. Will this new endeavor push their ever-growing Lego franchise to the next level or will it leave gamers with empty pockets and broken dreams?

The brand new trailer for Lego Star Wars: The Force Awakens has dropped and with it a lot of excitement. The trailer features the brand new mechanics being implemented into the game. From space battles to blaster battles, the entire system has made many improvement from previous titles. As expected, players will now be able to dodge enemy fire, aim with third-person shooting and fly in larger areas. The Lego games always had you solving puzzles using the environment and certain character,  but this time around players will have the option to take different routes in solving the puzzle presented to them.

Where the gameplay reveal trailer falls short, however, is when we reach the 1:05 mark in the video. We transition from combat and puzzle mechanics and are now introduced to the content that will be in the game. As we all know Lego Star Wars has always gone about giving players three movies with ten stages to traverse through. Though, this time around they currently only have one film to go off of creating a bit of a lack in content. Normally I would have expected this game to release around the time of episode nine or even after the first anthology film hit theaters, but it seems that they jumped the gun on this one.

In order to pump up total playtime we will probably see a more detailed set of stages throughout our journey traversing the legoized version of The Force Awakens. Instead of the traditional ten stages, we will probably get twelve or so and for our bread and butter there will be the addition of the “thrilling” backstory on how Han and Chewy captured the Rathtars. That’s right! Our “burning” desire to know how the most misplaced scene in the entire film came to fruition will be revealed! 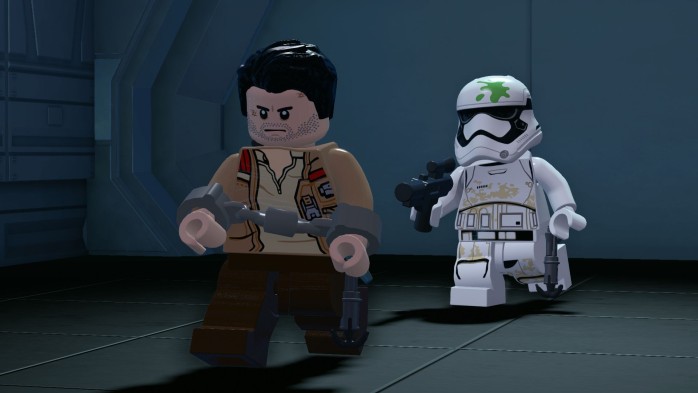 Sigh, aside from that stretch of useless unwanted information we will also be treated to “the continuing adventure of Poe Dameron,” which will actually be a welcome addition. He was arguably one of the most interesting characters of the film who didn’t get much screen time as he deserved, but now we will be able to get a better glimpse at his character. Finally the third so-called episode will address the backstory of Lor San Tekka (the elderly man who gives Poe the missing map to Luke.) Which begs the question, is the game praying on the lack of information given within the film to create content for the game or was the movie a setup to generate content for additional Star Wars properties like this? At first, before the Lego game was even announced, I assumed that the lack of backstory provided with characters like Lor San Tekka was intentionally done to either hide Rey’s history or to explain their purpose in later films like the upcoming episode eight, but now it just seems intentional to create unnecessary content like Lego Star Wars.

There are thousands of non-gaming Star Wars fans out there who are still scratching their heads trying to figure out who Lor San Tekka is and what his ties to Luke, General Leia and Ray are exactly. To tell that story through a Lego game is a bit of a slap in the face and if they tell it through Lego Star Wars, will they even address it in later film installments?

Don’t get me wrong, I love Lego Star Wars. I grew up on it and the games bring back waves of childhood memories, but as a Star Wars fan getting a mix between useless backstory (the Rathtars) and major character backstory (Lor San Tekka) shoved into the game because they didn’t want to wait for more content to released before shipping out a new next generation of Lego Star Wars games is frusturating.