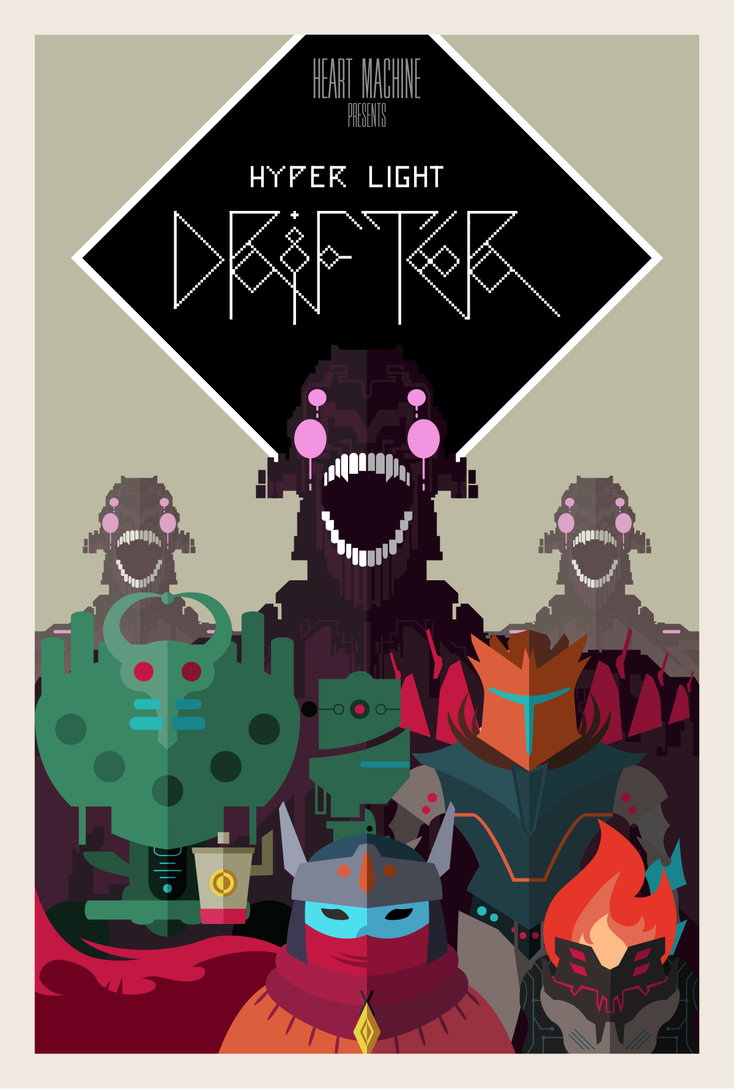 Hyper Light Drifter came into my life at the most perfect time imaginable and there are going to be quite a few of you that feel exactly the same way. As someone who suffers from a combination of crippling panic attacks and bouts of depression, despite a penchant for goofiness and a generally jovial demeanor, the idea of overcoming a major challenge really hits home.. Though I’ve attempted to fight my demons in the past, it’s always been a halfhearted journey down the least painful path possible (of course, anyone in the same situation knows that the tougher path is the correct one). In recent weeks, I’ve decided to actually face those negative feelings head on. Make no mistake, it’s perilously difficult and extremely uncomfortable at times, but there’s a sense of pride and clarity that has emerged as a result.

So why bring this up in a video game review?

Hyper Light Drifter, the debut title from Heart Machine, is not directly a game about anxiety or depression, but its narrative and themes are left open for interpretation just enough to allow any player to use the main character as a conduit for their own struggles. From its perilous difficulty to the sense of powering through being completely lost, all the way to the ethereal soundtrack and ambiguous symbolic language, Hyper Light Drifter allows you to embrace the feeling of overcoming impossible odds. Of course, it also helps that it includes some of the best combat of the year, as well as a downright gorgeous world that even sprite-art haters can enjoy. Personal analogies aside, the main inspiration of this gorgeous 16-bit action title is the struggle of its creator, Alex Preston. Preston’s lifetime battle against heart disease was not only the thematic basis for Hyper Light Drifter, but it also was the clear inspiration for the name of his studio, the aforementioned Heart Machine. This inspiring story translates into the genuine passion and love you can feel during every moment of Hyper Light Drifter. Still, you don’t have to be battling heart disease, depression, anxiety or any other tangible hardship to feel an emotional draw to 2016’s best indie darling to date. 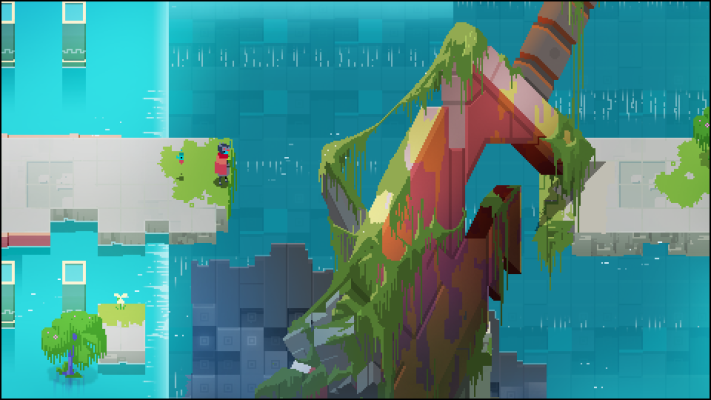 There are certain games that make for a near-impossible review challenge, largely because the entire package is designed to be one of discovery and secret-finding. From the Souls games to something like Journey, if you were to go about describing everything that you do in ambiguous or obtuse titles, it would completely sap the entire experience from what makes it inherently special. With that caveat in place, Hyper Light Drifter tells a wordless story of The Drifter, a mysterious cloaked character with warping abilities, intense sword and gun skills and a debilitating illness that is threatening to end his life unless he finds a cure. Essentially, players have to activate a pillar in each of the four sections of world, something that’s far simpler said than done. Unfortunately for The Drifter, each of the four areas are riddled with enemies, mysteries and traps that threaten to end his life before he can obtain the cure he so desperately seeks. The entire story is told without a single line of dialogue (in fact, the only English text to be found simply explains what each button on your controller does), meaning that player discovery and experimentation is the key to progression here. Through the combination of easily identifiable symbols to recurring characters that each play a role in your progression. Heart Machine has crafted a title in Hyper Light Drifter that manages to convey its message without having to speak. Though there are moments where fans of traditional narratives might feel a bit confused by this lack of language or the heavy reliance on atmosphere, Hyper Light Drifter simply isn’t a game that holds your hand at all. It’s for this very reason that players are able to warp its message to fit whatever mood they happen to be in at the time. A more rigid structure in this type of atmospheric title would create the same issue that plagued the often pompous audio logs in The Witness; Hyper Light Drifter gives you a basic structure and all of the beats you’re looking for from a video game, but it’s left open enough to allow it to feel as though it’s your own.

Where Hyper Light Drifter truly shines is in its absolutely brutal combat. By combining swordplay that feels like a the love-child of 2D Zelda and a modern character-action title with a variety of guns and the ability to use a phase-dash to avoid attacks, Hyper Light Drifter makes you feel powerful enough to conquer the challenges in front of you while still maintaining a high level of difficulty. In one of the coolest methods of inventory management in recent memory, slashing enemies and items with your sword provides you with more ammunition to use in your guns. This creates a satisfying combat loop that’s pretty simple to understand, but a massive challenge to master. Essentially, you’ll phase through enemy attacks, positioning yourself in such a way that you’ll be able to get a couple of slashes in, which will then give you the chance to fire your gun of choice and cause more damage. Because every enemy has a health bar below their sprite, you know exactly how much damage you’ll need to do in order to conquer them, thus giving you the chance to rapidly plan your attack plan before engaging in the bliss that is Hyper Light Drifter‘s fast-paced combat. On top of all of this, there’s a shocking amount of enemy variation at play, which allows the combat to never wind up feeling stale. From gun-toting soldiers to monsters made of crystals that cause rows of spiked earthquakes, players are going to be on their toes for the duration of the campaign. Oh, and if you’re a fan of brutal boss battles that feel straight out of the days of the NES and SNES, then you’re going to love the white-knuckle tests of skill at the end of every section. There are already some media members claiming that Hyper Light Drifter is too tough, but this seems a bit extreme. Though there are certainly moments where you’ll want to throw your controller out of pure rage (the right-side of the map is loaded with some horrendous dashing green foes), there really aren’t moments where it feels like you died for any other reason besides your own shortcomings. 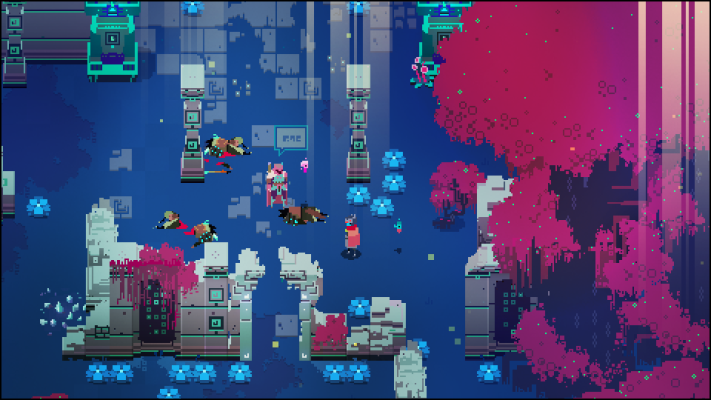 The four unique areas of the over- world feel completely different from each other, but each requires the player to explore with absolutely no hand-holding. There are certainly moments where players will see their maps populated with the various diamond pieces needed to advance to a boss, thanks to the aforementioned recurring characters, but the map as a whole is vague enough to where simply walking to an icon will not guarantee success. While it’s easy to see why Heart Machine chose to make the map itself so confusing, as it guarantees players explore this bizarre world, the actual map interface is the single biggest flaw in Hyper Light Drifter (outside of the slow trickle of currency to purchase upgrades, of course). The leftmost section of the world can get extremely frustrating due to the awkward setup of your navigation tools, and it’s clear that a fair number of players aren’t going to have the patience to navigate around this labyrinthine section of the map. The other areas of the world definitely find a perfect balance between guiding the player and ensuring that they don’t feel completely lost, and this sticking point is but a small blemish in an otherwise wonderful example of world-building. Hyper Light Drifter strikes a lot of the same bizarre chords that Transistor, perhaps the single most underrated title of the console generation, did back in 2014. The land of The Drifter is straight-up weird and obtuse, and there is so much left open to interpretation that it’s going to be impossible to claim that you understand everything, but that’s also what makes the entire experience so mesmerizing.

There seems to be a growing contingent of gamers that feel as though pixel art is somehow cheapening the medium. This vocal minority seems to think that because a game sports this type of iconic aesthetic, it’s somehow less modern and fantastic than its contemporaries in today’s gaming landscape. Let’s make one thing perfectly clear: making a game as gorgeous and pixel-perfect as Hyper Light Drifter takes arguably more effort than it does to animate 3D models (there are very clear exceptions to this generalization, so take this with a small grain of salt). You’d have to be borderline blind to look at Heart Machine’s debut title and not find it absolutely beautiful, as it stands out as perhaps the most gorgeous pixel-art title since the dawn of the independent game revolution. Every pixel on the screen feels placed with purpose, and every one of The Drifter’s animations looks downright badass thanks to this stylistic choice. The addition of an emotional, haunting original soundtrack make Hyper Light Drifter a feast for the senses, and it clearly stands up there with The Witness and Firewatch as one of the most artistically striking titles of 2016 thus far. Sure, it was made in GameMaker and its total file size is currently sitting under a gigabyte, but that doesn’t take away from the unmistakable beauty at play here. 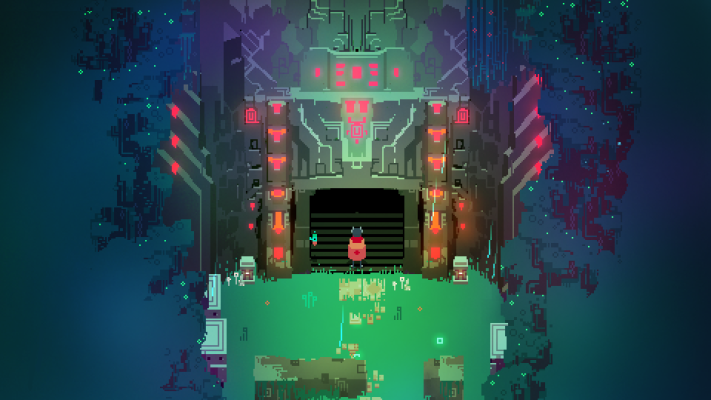 Sure, The Division is a great game that has hooked millions into its addictive gameplay loop and Far Cry Primal did breathe a bit of fresh air into a stale formula, but 2016 has been off to a strong start as the clear result of its outstanding independent titles. From Pony Island and The Witness all the way to Firewatch, Stardew Valley and now Hyper Light Drifter, the strongest titles of the year so far have come from smaller development teams with more humble goals. Hyper Light Drifter stands out as a game that not only manages to combine exciting combat, gorgeous visuals and an inherent drive towards exploration, but its emotionally open-ended narrative and thematic prowess make this a title that feels like a true labor of love. Even if you’re not someone whose personal tales of hardship align with those of The Drifter, you’ll still have your hands on a unique title well worth the wait. If you’re someone who typically shrugs off indie games as somehow less meaningful then their AAA counterparts, you owe it to yourself to play Hyper Light Drifter. Alex Preston and his team have delivered a title that highlights everything great about the medium as a whole, it’s as simple as that.