It’s time for another rundown of the Arcade Block that just arrived on my doorstep! Honestly, I still find myself thrilled with the items in these packages. These little knickknacks and gaming related randomness warm the cockles of my cholesterol packed heart. This month’s block was no different, but the contents are a tad strange.

Starting off, there is a box with Pokémon flavored Russian nesting dolls. Opening it up reveals a representation of a small battle monster until reaching the center, which is represented by a Pokéball. Handing this item off to the wife to do with as she pleases (sorry, folks), I tore into the next item. This one is rather cool; it’s a small Nemesis figure from Resident Evil. Commemorating the twentieth anniversary of the series with this neat little guy works for me. I believe that he will stand guard over my paltry Amiibo collection for the pure fun of it.

Just Cause 3 got some love again this month with a grappling hook memo clip. Pulling the packaging of this one apart was kind of a bear. They really wanted this one to survive the trip. While it looks cool, one wonders about the usefulness of the item. The hooks jut over the space where the notes are to be placed, meaning that it wouldn’t be very useful for displaying that priceless Van Gogh doodle.

The package is rounded out with two more items. The first is a small plush Mega Man from Monster Factory. This thing is adorable. However, it does look like the end result from the mating of The Muppets’ Beaker and Mega Man. I refuse to look to see if this fan fiction exists based purely on the fact that ignorance is bliss. Still, he looks better than he did last weekend when I discovered that I am nowhere near as good at his games compared to my youth. Meep indeed.

Finally, there is the t-shirt. This one is based around the idea of Deadpool starring in a Burgertime knock off. I’m assuming that the name would be Chimichangatime, though the shirt says tacos. Either way. When going through this package and trying to deduce an overarching theme, the end result is madness. There’s Nemesis and a severed hand. The spawn of the worst Rule 34 idea to have ever been conceived next to the innocence of Pokémon. It’s best to not connect the dots and just assume that the theme was “Stuff, Dammit!” And I like stuff, dammit. 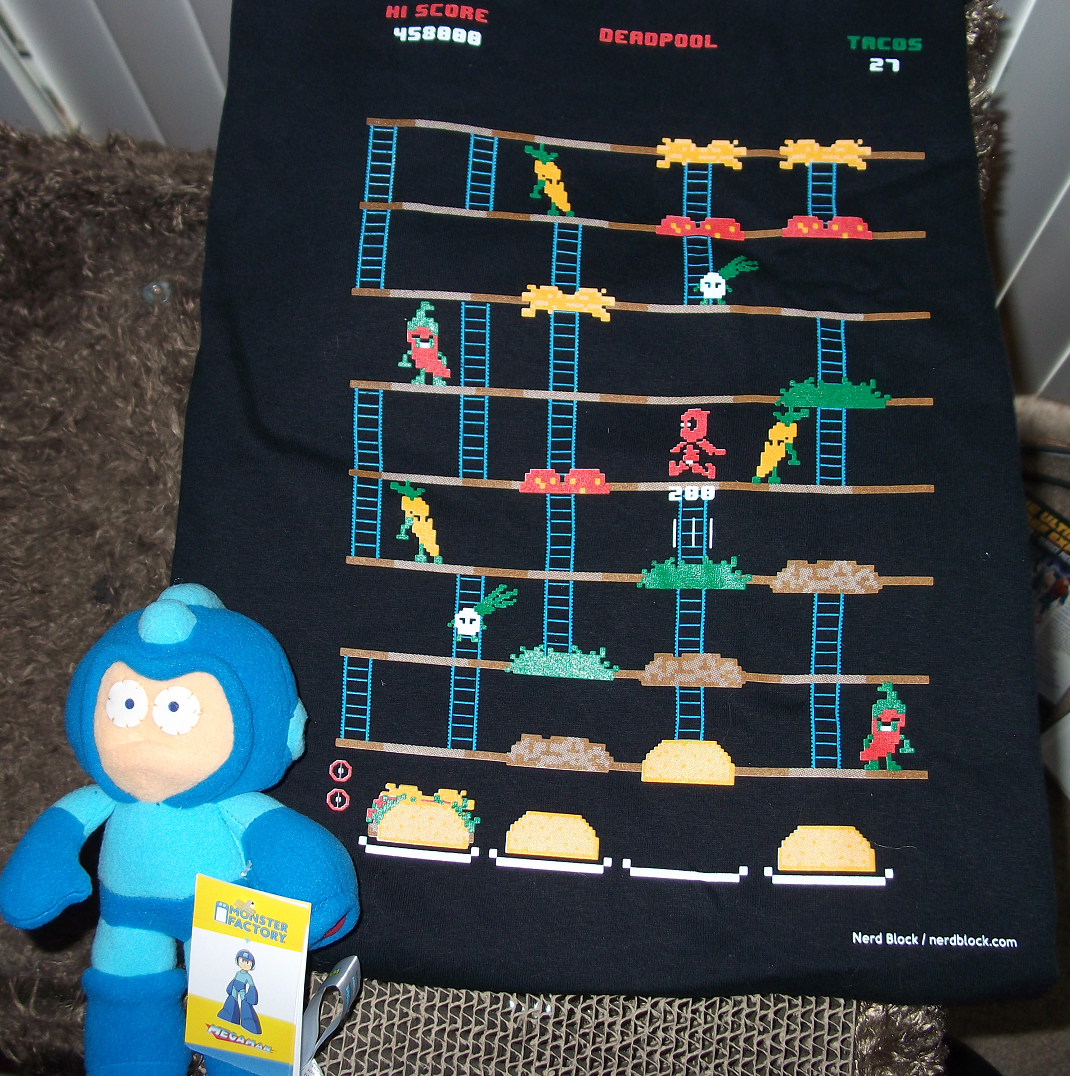 The customary glimpse of next block’s contents was also included. We are promised items from Zelda, Assassin’s Creed and Borderlands. Three of the items are promised to be exclusive to the block, which is always a cool perk. For those interested in getting in on the action, check out Arcade Block’s site.