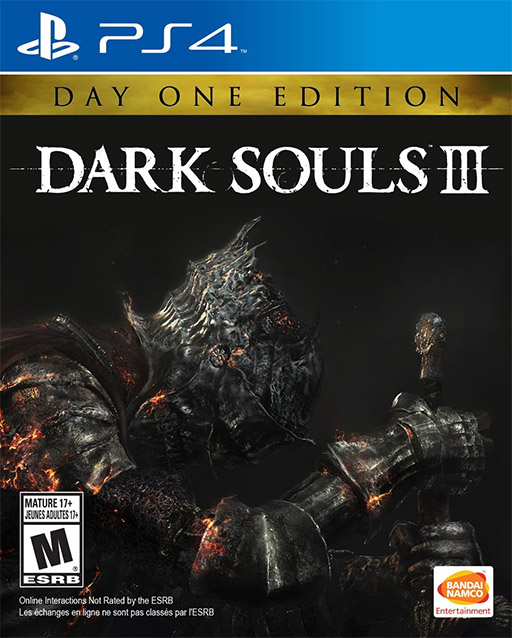 It’s hard to believe the level of success From Software has received over the last ten years. The Japanese developer was originally best known for creating the Armored Core series during the late ‘90s and early 2000s, along with releasing various other mech and character action games on the side. It was only when the company joined forces with Sony to create the highly regarded Demon’s Souls that things really boomed for them. Ever since then, the Souls games, and spiritual successors such as Bloodborne, have received exponential levels of fame, generating millions of sales and being critically panned virtually across the board. For a format that’s being released pretty much on an annual basis, it’s hard to believe the series of games have yet to get old. Alas, From Software continues forth with the third official installment into the Dark Souls series, bringing various new mechanics to the beloved formula, along with readjusting other features.

Right off the bat, for anyone worried about the direction From Software is taking the series, it should come as a relief to know Dark Souls III is significantly better than its predecessor. Dark Souls II was still a great game, but there were plenty of misgivings. This included occasional baffling level designs, some of which made you question the architects of the world, and an emphasis on boss quantity rather than quality. While the world was still vast, it didn’t necessarily live up the expectations the first game set in its way. Fortunately, Dark Souls III fixes a lot of the issues mentioned. There are rarely any locations that are completely plain and empty; there are still a few here and there, but they’re far less frequent. Although, progressing through the campaign, it actually felt like as if the models in the background began to decrease, going from a world that looked lived-in, to pristine and barely touched. There are also two-thirds the number of bosses this time around, with the focus being on exploring interconnected environments while not always limiting players behind fog gates. It is a little shorter than its past two titles, taking roughly thirty, maybe as high as forty hours if you’re having trouble in certain areas, to complete, but every minute of it is gratifying and new game plus offers various new challenges to keep your interest. 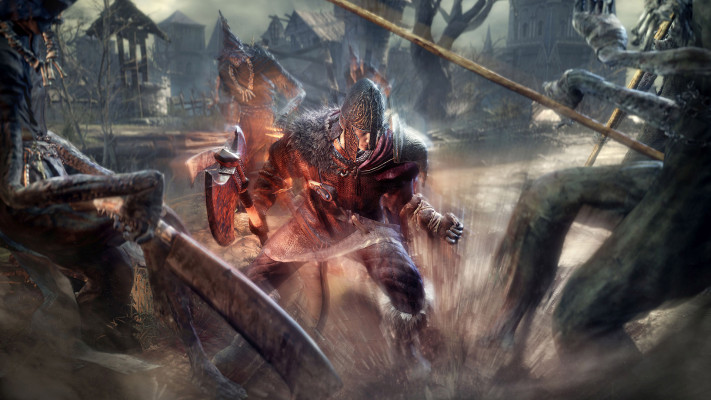 While Dark Souls III has received major improvements, it’s not all sunshine and rainbows. The biggest complaint we have is that it carries over the misplacement of bonfires and shortcuts present in the previous game. Even more so this time, it feels like there’s far too many checkpoints for the player to hit, as opposed to the original games in the series where it was about unlocking various, meaningful shortcuts along with finding hidden paths to easily avoid combat. There are still shortcuts spread throughout, but there are still quite a few questionable choices. For example, in a snow-covered kingdom, players can unlock a “shortcut,” if you want to call it that, which saves maybe five seconds, as opposed to going the standard route where there are no enemy encounters whatsoever to begin with. There’s another in a cathedral where two shortcuts are present, but they’re ill paced. It takes forever to get to the first shortcut but then no time to get to the second. The bonfires are no better; for example, there’s one after defeating a boss and then usually another shortly after when entering the next area. While entering a new location for the first time can be tense, it’s somewhat taken away when you realize just how easy each is when there’s a bonfire around every corner, sometimes right next to the boss room.

Regardless, outside of some mishandled shortcuts and bonfires, Dark Souls III almost feels like a hybrid between Dark Souls and Demon’s Souls. The Firelink Shrine itself has basically been turned into the Nexus hub (or Hunter’s Dream in Bloodborne), allowing the player to traverse the vast world and interact with all of their recruited allies within one spot. Enemies also no longer disappear as they did in Dark Souls II, which was an effort to limit farming and potentially over leveling. Its removal significantly improves the experience as obtaining the desired weapons, armor and upgrade items comes with little to no struggle. The covenants have also been slightly reworked, opening each one up to everyone and switching between them being assigned to a simple equipment option in the menu. This means players will be able to get all of the covenant rewards without having to reset the values at the end. It will also sometimes affects certain friendly NPCs, though, allowing them to be summoned to help face off against a boss, or even turn their blade the other way. It’s a matter of experimenting and listening to the alliances each individual is sided with, although it doesn’t make that big of a difference. 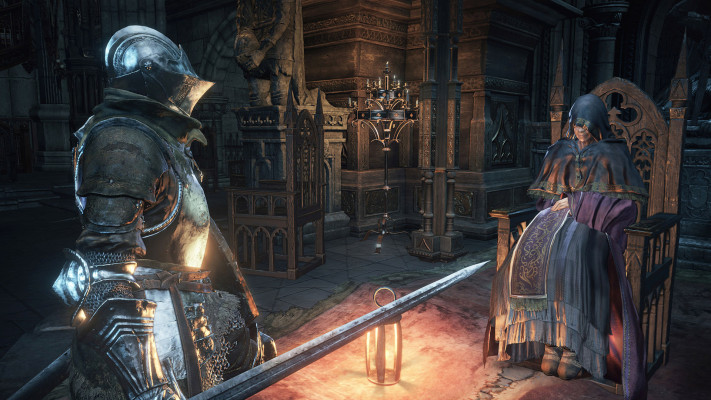 Power Stances have also been removed in favor of a new FP (Focus Points) system. This is more in line with Demon’s Souls in regards to the magic system, but it also adds special attacks, as well. Prior, each spell was given a set amount of usages before it would need to be recharged at a bonfire, but now they’re set back to a dedicated bar that will drain with each use. If you’re not into performing magic, the FP bar is multi-functional, meaning that two-handing specific weapons will allow players to perform special attacks. These are primarily used for charging up a devastating shot, but can also be used to parry others, as well, depending on the weapon. It’s a fascinating system that allows for additional strategy when going into combat, being a risk-reward venture. It’s also even more streamlined than ever before as you’re now able to reallot your Estus Flasks to either heal HP or FP, so choose carefully how a character is played.

Dark Souls III’s story is as ambiguous as it has ever been. There’s little dialogue throughout the thirty hour campaign, and when someone has something to say, it’s usually hidden in riddles. The world itself is very much a sequel to the original Dark Souls, though, as opposed to Dark Souls II which was meant to be hundreds of years (if not more) in the future where all the events and figures became stories of legend. Here, you will come across familiar locations, meet recognizable characters, and even spot monsters once battled, be it they’re still kicking or deceased. There’s just something satisfying about trying to piece together where exactly you are in the world because, while one particular area has stayed the same, the vast majority has changed. It may look like an entirely new area, but there are hints and clues spread throughout the environment that tells a different tale. It’s this careful attention to detail that we love and shows the amount of passion From Software brings to the fiction.

Finally, the side quests feel far more ingrained in the story as opposed to being loosely connected to what is happening in the world. Side stories are still missable if certain parameters aren’t set, causing things to end prematurely, but they’re harder to miss this time around. They will also drastically modify certain events and how they play out, as well. For example, one side quest basically takes an incredibly difficult boss fight and makes it a cake walk, whereas another that is determinate on the character’s gender will alter the ending of the game drastically. There are far fewer side stories to partake in this time around, but the implementation feels more concentrated and properly iterated as opposed to before where they purely offered new items. 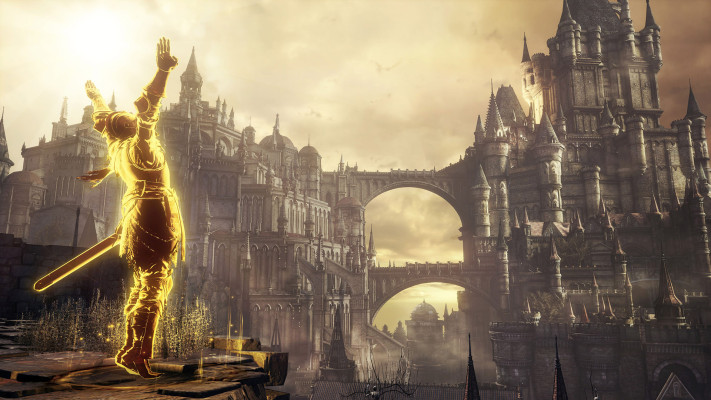 Dark Souls III is shorter than what we’ve come to expect, but it’s also more consolidated to give players exactly what they’re looking for without any unnecessary fluff. There’s still some mishandled bonfire locations and shortcuts spread throughout the world, but this is still a major step-up in level designs and boss battles. It will bring nostalgia back to a game that isn’t even five years old yet, moving through a world that feels oddly familiar, yet at the same time new and refreshing. For those who haven’t been able to get into Dark Souls in the past, your mind won’t be swayed here as the third installment is mechanically the same with only slight alterations to combat and progression. Fortunately those already tightly entrenched in the series won’t have anything to scoff at. Significantly improved over its predecessor, Dark Souls III will have players immersed in the deep and rich fiction that From Software is known for.