While the story of the episodic King’s Quest might not necessarily be canon to the actual universe, you can’t help but love it as though it was.  The newest chapter coming out is called Once Upon A Climb and focuses on Graham climbing a tower to meet his beloved only to find that there are two different princesses stuck in the same tower.  While this episode follows the events of the second episode, Graham is now in his 30s telling the story of his youth to his young granddaughter, Gwendolyn.  He has already been crowned the king of Daventry and thus this episode seems to tell the story of the second King’s Quest, King’s Quest II: Romancing the Throne.  Though the original story tells of Graham saving Valanice from the tower, the episodic re-imagining tries to tell it from a more humorous point of view, there are two women and you have to convince one that you love them regardless of the fact that you’ve only just met her. 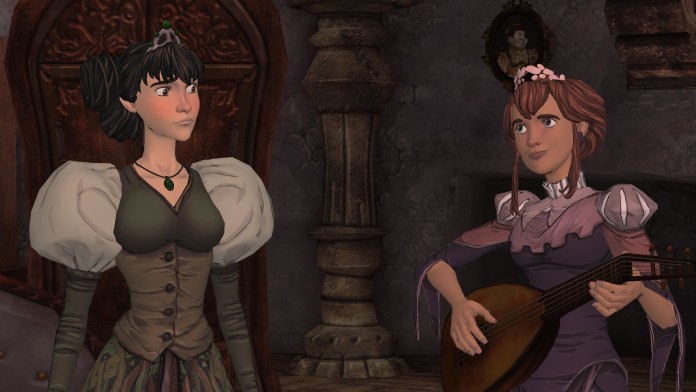 This chapter features several puzzles as well as plenty of open scenes, which were compared to the opening scene of Citizen Kane, that leave players in awe.  While most of the puzzles that were viewed were in relation to climbing the tower, it would be a shame not to mention how much fun The Odd Gentlemen makes simple puzzle mechanics.  Something as simple as climbing over to a rock that will show you the right path is manages to give a certain charm that alludes to the classic King’s Quest games.  The Odd Gentlemen also makes sure that while the story is meant to be taken seriously, there are also realistic turns that make for a great story to tell young Gwendolyn.  Love isn’t always saving the princess form the tower and asking her to be your bride.  What if there are two?  What if all signs point to both of them being your potential wife?  Your next bet is to propose to one and hope for the best, seemingly failing at doing just that.  Regardless of that, you are still a hero and heroes still have to rescue princesses from their tower, even if they both don’t like you already. 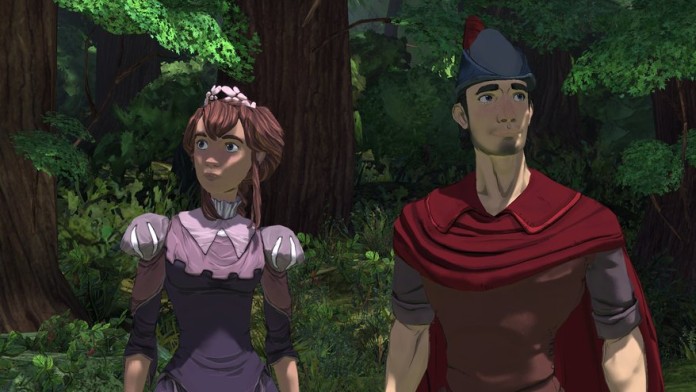 The world of King’s Quest is still rather expansive, especially within a sea of relatively closed episodic titles.  You have to walk through meadows, forests, cross lakes and rivers, all to get to your objective.  You are given the illusion of being able to explore without necessarily being able to do so, and that’s just fine.  The real purpose of this chapter is to explore the awkward situation that is love and gaining freedom from the witch Hagatha.  The episode will be released across all platforms, save for the Wii U and will be released on April 26.