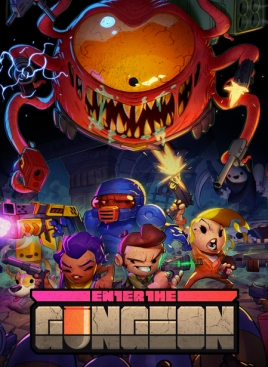 I was originally going to start this review by putting a heavy emphasis on the craziest gun I could find in Enter the Gungeon, then suggesting that alone would be a reason to purchase the game. As it turns out, though, I couldn’t find one gun that outshone the others when it came to craziness. The gun that shoots bees which home in on the enemy? Fun. The lower-case “r” that shot out the letters B-U-L-L-E-T complete with “BANG!” onomatopeia? Loved it. The t-shirt launcher that left the corpses of bosses buried under avalanches of corporate advertisements? Amazing. A replica of Earthworm Jim’s blaster, complete with a thousand invisible bullets and no need to reload? Hell, I squealed like glee when I came across that. So I couldn’t come up with any one gun for a highlight, which is appropriate, as Enter the Gungeon has so many amazing elements to it in general that picking just one as its highlight would be near impossible. Indeed, it easily stands out as one of the year’s best action games so far.

A top-down shooter/roguelike hybrid, Enter the Gungeon is the story of four different people – the pilot, the convict, the marine, and the hunter, each with their own weapons and skills – as they venture into the depths of the legendary Gungeon in order to retrieve a gun that can kill the past in order to make up for their previous mistakes. Along the way, they’ll encounter a colorful cast of characters that can help them out, along with an equally colorful cast of foes and bosses who just want to blow their heads off. Your primary foes, the Gundead, are the game’s signature character, and for good reason. The designs of countless walking bullets of different types all sporting simple cartoon expressions are a hoot indeed, almost reminiscent of the likes of Adventure Time and its Banana Guards. In fact, the whole game may as well take place in the Bullet Kingdom, as every enemy you encounter plays up the imagery of guns and ammo to eleven, from iron maidens with firearms instead of spikes to dog-like sentient grenades and giant bullets sitting atop thrones of guns. It’s a gleefully colorful and demented lot indeed (especially with the bosses). 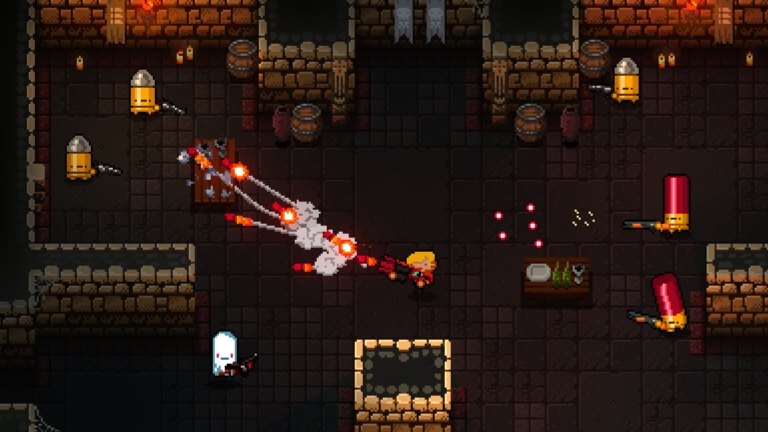 Of course, it helps that the graphics display all of these characters in glorious sixteen-bit-styled glory. The pixel art is eye-popping at every turn and the animation is great, but what really helps sell it are all of the little details in each area. Aside from perfectly capturing a wide variety of castle-themed areas right down to huge dining halls and occasional indoor gardens, nearly everything you see is destructible, leading to moments where you enter what appears as a peaceful library, but you leave it with torn pages and shattered globes everywhere, highlighting just how intense the firefight you just had was. It’s all of the bits such as that which go a long way to create a delightfully crazed, action-packed atmosphere (the pulse-pounding soundtrack also perfectly contributing quite a bit as well).

Speaking of the combat, I suppose we should talk about the real meat of Enter the Gungeon already. If I had to describe the gameplay, I suppose the first thing that comes to mind is a cross between The Binding of Isaac, bullet hell, and John Woo action scenes. It’s the perfect kind of twin-stick shooter, with simple-to-use controls that work like a dream. The two actions you will have to master, though, are the dodge roll, necessary for avoiding projectiles and traversing various hazards, and the ability to craft you own cover by flipping over any tables you find. I admit I didn’t find the latter as necessary as it appears (choosing to mostly strafe enemies instead), but it is indeed a terrific addition that adds to the over-the-top action flavor, and both maneuvers are executed quite easily. 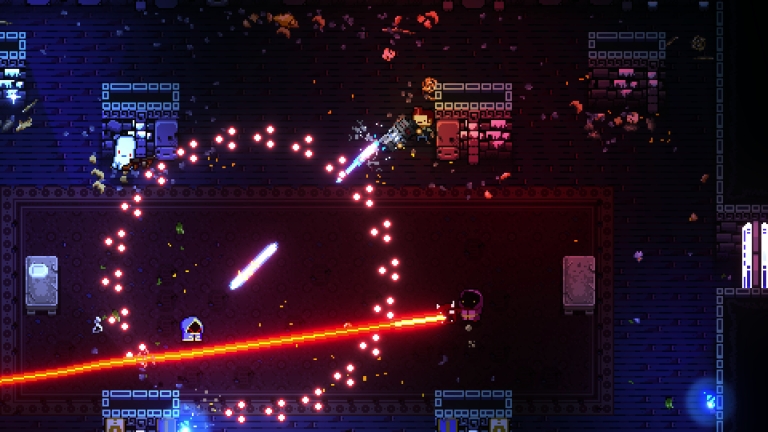 Seriously though, one cannot emphasize just how much fun zipping around the area and blasting all the Gundead in sight while rolling through their bullets is. Every room you unlock in a level is a new treat to discover, with the game’s procedurally generated levels devising some scenarios that put up an amazing, tough-as-nails challenge as well. The perfect kind of challenge, the one that requires razor-sharp reflexes and where you only have yourself to blame for your death, the type that rewards pure skill. The perma-death elements also beef things up even more, causing you to value every last shred of life if you want to reach the end. Fortunately, you can also use hegemony currency collected to send new weapons and items down into the Gungeon, once you unlock things.

Of course, you have more than a few tools at your disposal to help you out as well. There are the guns themselves, quite unsurprisingly, which are all a blast to experiment with, and various items you can hold to alter your skills and stats, right down to the ability to create table flips so hard that they cause shock waves which destroy enemies and uncover hidden areas. Speaking of which, there’s a deep amount of secrets in the game that will take a while for you to scratch the surface of, and will keep you coming back to try and uncover as much as you can.

Does Enter the Dungeon have any flaws, though? Well, just one of the flaws that sadly shows up in a lot of randomized and/or procedurally generated games such as this, that being there’s always a chance that fate is not on your side this time and that you’ve been dealt a hand of an extremely hard group of enemies or a shopkeeper who doesn’t have any health to sell when you need it the most, to name some examples. I also felt that the guns which required charged shots weren’t as effective in a game as fast-paced as this, but that could just be my own personal choice of play styles. 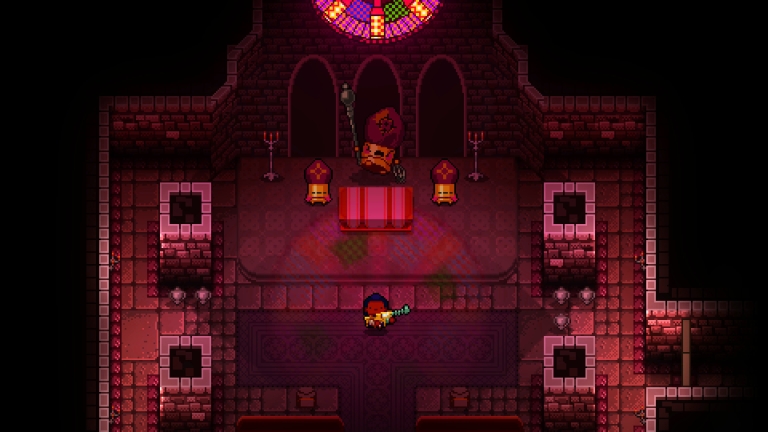 One notable little detail in Enter the Gungeon is that every time you return to the hub area early on, the four characters keep decking out the little corner they’ve set camp in with more and more decorations such as bunk beds and pizza boxes, eventually becoming increasingly comfortable even as they keep heading back into the carnage over and over. That’s a perfect metaphor for the game right there, as it’s a superb shooter with a terrific sense of humor, astonishing action, and style and charm oozing out of every corner of its pixelated world. An absolute blast at every turn and just pure concentrated fun overall, Enter the Gungeon is an absolute gem that is not to be missed out on and Dodge Roll should be congratulated for it. Now if you’ll excuse me, I need to go back and hunt for that shark-launching gun…