I’ll admit that when I initially heard that Square Enix Montreal was bringing Hitman Go to Oculus, I was a wee bit skeptical. After all, how many platforms can a game be great on before the luck finally runs out? Though Hitman Go remains the title that would single handedly demonstrate the value of augmented reality, virtual reality is another beast entirely. Luckily for those who either love or have never played Agent 47’s board game romp, it’s likely going to be the best title available for the Rift when it launches on May 11.

The funny thing about Hitman GoVR is that it took roughly fifteen minutes before I realized why this title works in virtual reality. The first half of my thirty minutes with this version of Square Enix Montreal’s elegant puzzler was spent playing Hitman Go through a monitor strapped to my face, nothing more. It wasn’t before I was informed that I could lean forward and get a complete view of every inch of the gorgeous dioramas in front of me. Not only does this new view give you even more opportunity to plan your moves ahead, but it presents one a fascinating conundrum that’s facing virtual  4 developers around the industry. 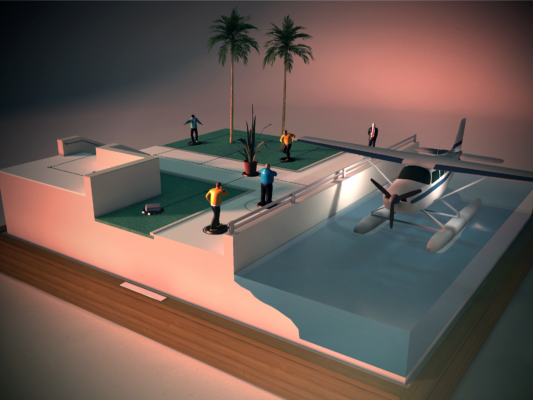 The single laziest use of virtual reality is to simply map the right joystick to your face. Make no mistake, there is still an incredible amount of immersion to be had in first-person titles that let you look around your surroundings, but this is nowhere near as transformative as some of the more unique VR experiences floating around. On a personal note, the title that sold me on the potential of virtual reality as a medium was Superhot, which orients your head in positional space, allowing you to actually dodge bullets by moving your noggin. This experience takes Superhot, which is already one of the best games of 2016, and turns it into an instant selling point for this exciting new medium. Hitman Go VR’s head-tracking demonstrates the potential of VR on an admittedly smaller scale, but it elevates Square Enix Montreal’s breakout hit to an entirely new level.

The thing is, how do you show players the influence head-tracking has on Hitman Go? Simply stating that players can look over the board is nowhere near as elegant as telling players they can use the d-pad to move. Assuming that players will inherently know to do this, especially in a game that they likely have played before, technically risks a portion of the audience not utilizing the product to its fullest. This definitely racked my brain for a little while, but two very important caveats made it clear that this is far less of a problem for this specific title.

First and foremost, if you spend $600 to be an early adopter of a headset designed to work with your $1000+ dollar PC and don’t know head-tracking is a thing, that’s kind of on you. Square Enix Montreal is banking on a less harshly worded version of this idea, and that actually seems better than greeting players with an awkwardly-worded tutorial (especially in a game inherently-based on experimentation). Second, no human can keep their head perfectly still, so you’re bound to realize that your head’s position is being tracked. Still, it’s actually pretty cool to think that Hitman Go is the title that is inspiring this line of thinking. 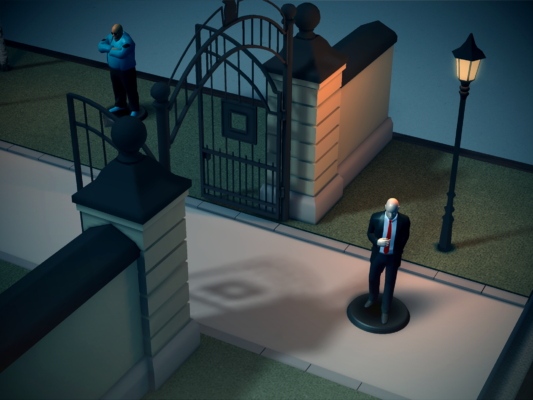 On top of the head-tracking, Hitman Go VR also gives players the ability to navigate through each stage by highlighting nodes with their eyes and pressing the A button on a controller. GearVR users will be able to use the directional buttons and the selection button, in addition to being able to look around, but the head-tracking available on the Rift will not be present. Finally, a VR specific hub was designed from the ground up for these headsets. This last aspect is what makes Hitman Go VR feel less like a port and far more like a title that could have been designed for virtual reality from the beginning.

For a studio that has become the premiere name in premium mobile development, it’s an absolute joy to see Square Enix Montreal branch out into new areas. While new projects for mobile platforms are certainly in the works, the small studio should be proud of the work being done on Hitman Go VR. After all, one wouldn’t guess that the definitive platform of this outstanding title would be the Oculus Rift, but that’s exactly the case.