Call of Duty 2016s supposed title has been leaked, and will apparently be called Call of Duty: Infinite Warfare.

Neogaf user JumPeRJumPzZ found something very interesting on the PlayStation Store today. Under “Trending” are a bunch of games that are coming out soon, but also something that hasn’t been revealed yet. Call of Duty: Infinite Warfare has most definitely not been announced yet. However, it doesn’t look like Sony uploaded any images or details to the page. Sony has since removed any mention of Call of Duty: Infinite Warfare. 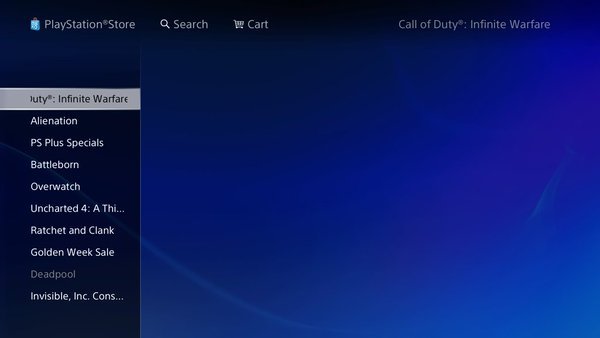 This is the second Call of Duty 2016 leak today, the first coming from Jim Sterling who got his hands on apparent marketing materials. Those materials suggest that Activision and Infinity Ward are prepping a reveal for sometime around May 3. It’s possible that Sony was given the upcoming materials, and accidentally went live with a part of it. Another rumor suggests that Call of Duty 2016/Infinite Warfare will take place in the far future and feature sci-fi elements. Obviously we should take this as a rumor until either Activision or Infinity Ward makes an announcement.