At a convention like PAX East, where you’re surrounded at all times by thousands of people, blaring livestream shoutcasters and hundreds of games, it can be pretty difficult to get absorbed into any one experience. Even with virtual reality games that literally block off your peripheral vision to transport you into another world, it’s hard not to remain acutely aware of your surroundings. Outlast 2 developer Red Barrels Studio actually went to the trouble of building a sound- and lightproof enclosure to make sure players would be able to stay immersed. Yet without a doubt, the game I lost myself in the most during the show was Klang.

Klang is a neon-infused 2D rhythm-platformer, and it’s being developed solely by Arntzen, though he is contracting outside help from bLiNd with the game’s pounding soundtrack. Klang mixes standard 2D action with elements from rhythm games in some really interesting ways. When enemies attack you, they attack in waves that correspond to the beat of the music and you’ll need to tap the proper button at the right time to parry them effectively. In that sense, Klang is a little like if each set of Goombas challenged Mario to a round of Dance Dance Revolution.

Like a true rhythm game, then, Klang’s early action — limited for PAX East to the game’s tutorial — actually became easier the harder it got and the more it demanded from me. Even though the enemies’ attacks were coming at me much faster, I was able to fall quickly into the pace of the music and instinctively attack each threat in time. As the tempo changed, so did my expectations from the enemies; even if I didn’t know from which direction they would be attacking, I could feel exactly when it would come, and that made all the difference.

But that presents an interesting challenge to overcome then: How do you balance a game’s difficulty when it relies so heavily on the player’s innate sense of rhythm? 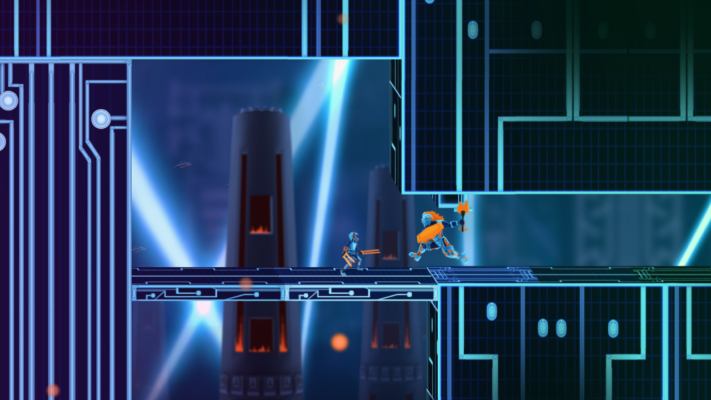 “One has to find the average, right,” Arntzen said, “because [the] people that really struggle with the rhythm, they get overwhelmed when it goes too fast. So I’ve got to find that middle golden ratio where both [types of player] can do well.”

Arntzen told me that he wants Klang to be a challenging game for players, and he makes that explicitly clear with the game’s difficulty options; while an easier mode is available for players who need it, the standard mode has a Halo-style “the way the game is meant to be played” description.

“I’d like to be somewhat punishing and demand something from the player,” he said. He knows that for players to fall into the game’s rhythm and hit that “euphoric feeling” where you’re able to parry attacks without thinking, it’s unavoidable that the game occasionally throw you into fast-and-furious scenarios.

Arntzen, having developed the game by himself for a couple years now, has played through some sections of the game — like the introduction level I played in the PAX East demo — so many times and gotten so good at the game himself that he can often barely tell what an average player can handle anymore. He told me that at one point he invited a friend over to try a new build of the game where he had ramped up the challenge in the tutorial section to what he now considers “endgame difficulty,” not realizing just how demanding it would be for a new player. As a result, he’s been relying heavily on playtesting to keep him grounded and has developed a much smoother difficulty ramp. Still, Arntzen highly recommends players to go back through previous levels to master the mechanics and improve their score. He likened the game’s overall structure to “less like Metroid and more like Donkey Kong Country” in that the replay value you’ll get will come from finding secrets in previous levels and increasing your score.

“The experience from getting a C-rank and an S-rank are two completely different things. You will be encouraged to go back and get an S-rank on things because you’ll feel amazing when you do it.” 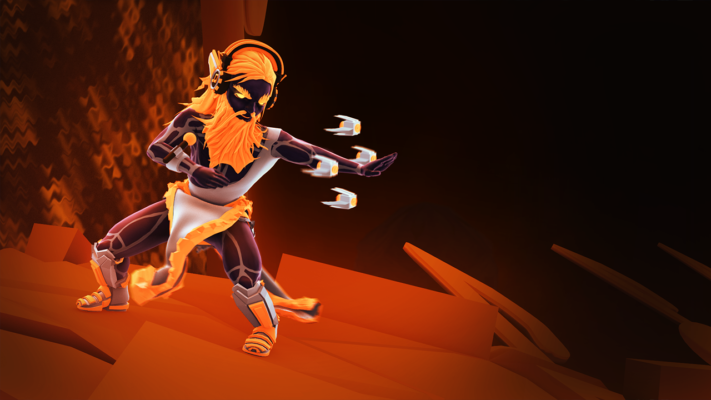 The PAX East demo ended on a fight between the protagonist and a Zeus-like god where the latter punches the former away to end it. When I told Arntzen the moment reminded me of the opening to God of War III, he smiled. “God of War III specifically was a huge inspiration for the game,” he said, pointing out the overall vibe of ancient Greek mythology in the game’s art design.

I point to a criticism often levied against the God of War franchise, that even though players have many options for creating a unique play style by using all the tools at their disposal, ultimately many players just “square-square-triangled” their way through the entire game. With a rhythm game like Klang that ostensibly forces players to conform to a beat, how much uniqueness can it really allow the player?

“That’s actually one of the very biggest challenges I had designing the game,” Arntzen said. Though the nature of the game to an extent will inevitably lock players into tapping out their predetermined parry patterns, the way Klang will layer on multitasking to demand more from players and encourage mastery to get a higher score might make that issue a moot point. Still, the issue is very important to Arntzen. “Player self-expression is something beautiful to games.”

Even though my demo of Klang was short and surrounded by chatter, cosplayers and high-octane e-sports announcers, everything still managed to melt away and all I was left with was the beat.

Klang will be out in the not too distant future for PC, Mac and Linux, with a possible console release afterward.