If you gave Videoball a passing glance, you would probably come away with the impression that it’s nothing more than a simplistic minigame, the kind you might play a few times when friends are over before you all lose interest. That’s in some ways intentional, game director Tim Rogers told me at PAX East.

“We wanted to make a Mario Party game that was eligible for the Olympics,” he said.

Rogers has been working on Videoball for three years with a crew of three other developers, each spread out across the continent, and he is clearly not tired of it yet. From behind thick frames, Rogers’s eyes light up whenever we land on a minute detail about the game’s design or a high-level strategy.

A screenshot doesn’t look like it. Even as I talked to Rogers, the game being played behind him on publisher Iron Galaxy’s livestream simply didn’t convey the depth in mechanics he was describing. It’s a game where players are arrows who shoot triangles at balls to push them into the other team’s goal. How much depth could there possibly be? As it turns out, quite a bit. 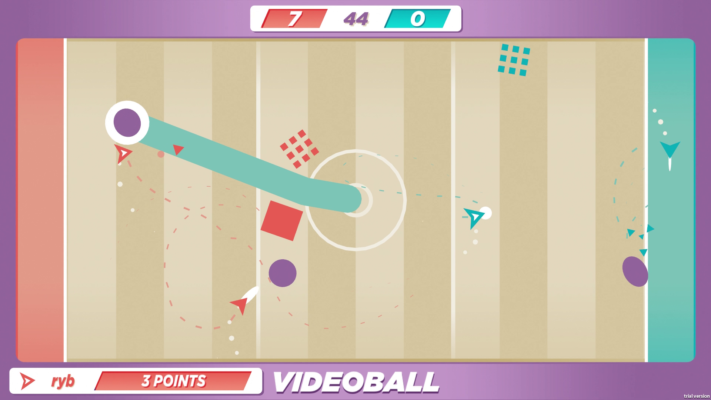 While the basic premise of the game can be summed up pretty quickly, that summation will inevitably do the game a disservice by making it sound “simple” instead of “intuitive.”

The goal of Videoball is to push the ball into the other team’s goal by shooting triangles at it. You can configure the game with up to five balls and up to six players. Only the triangular shots will move the balls; if a player touches the ball, it will do nothing more than temporarily stun him. The size and strength of the triangles you shoot is dependent on how long you charge them before firing. There are three levels of force, and a final fourth level turns your shot instead into a defensive square that can be placed onto the field to block a ball or another player. The weakest level shot might be enough to rapid-fire push a ball a short distance into the opponent’s goal quickly, while the strongest level is enough to pause the game for the slightest moment before the ball violently rockets away; if any shot touches the ball during that high-velocity push, though, it will deflect the ball’s momentum into a new direction.

The triangular shape for the shots was a very deliberate choice, Rogers said.

“This is the most important topic in the game. The idea is our projectiles are triangles and the ball is a circle, so actually aiming a triangle at a circle is very interesting because the largest triangle will only touch the ball… the triangle can only tangent the ball at one point along the line, so being able to predict where that tangent point is going to be, where the triangle is going to touch the circle and learning how it can touch the circle at any of hundreds of point along the side of that triangle [is very important]. So learning to aim is an hours’ long process that you almost can’t tell when you first start playing the game that it’s going to take you that long to actually [grasp].

“And you can’t really see the difference. If you’re playing against someone who’s played a hundred hours, maybe in the first 10 seconds of the game, you won’t perceive how much better than you they are, but it will become evident. We’ve been streaming this all weekend, and we’ll show some YouTubers how to play the game, and then we’ll ask them, ‘Do you want to get beat in less than 50 seconds?’ and then we beat them 10-to-nothing, and it’s like, that’s the difference.” 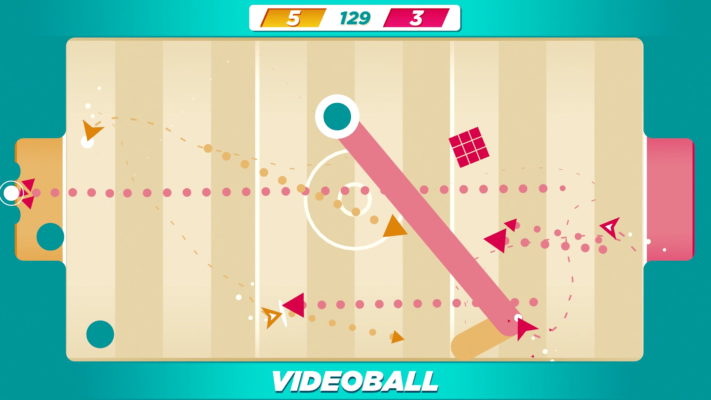 If Videoball is so complex, though, why not ditch the bright colors, the flat shapes, the friendly sounds? Why not make it look more intimidating to clue players in to its depth and potential for mastery?

“That’s one of my favorite questions,” Rogers said. “It’s because it looks like it has to. It looks like the mind of a quarterback.” Rogers said he stripped away the distractions of other sports and resisted adding on a metaphorical layer the way, for instance, fighting games introduce characters, stories and a new universe to justify themselves, and what he was left with was Videoball. He simply saw no need to complicate the premise and instead concentrated on legibility.

“All these trails on the screen,” he says, pointing to the dotted lines behind players and the smoother lines behind moving balls, “if you were to take a screenshot, you can see the last three seconds of the game on the screenshot because of the way all of the trails work. Very proud of that.”

The language Rogers and his team at Action Button have created is a vital tool for spatial awareness. Rogers explained, “This is a game where you get to bargain for which balls you fight for and which you let go. […] Learning to see everything that’s going on on the field is the number one skill. You need to know where everything is at any given time. Nothing should ever surprise you.”

He points to the game behind him. “You see what Player 4 just did?” He explains that the player was able to anticipate that one of the three balls on the field was about to spawn into the center, so he charged up and fired a third-level shot that hit the ball into the other team’s goal before anyone else even had a chance to touch it, a “slam dunk” in the game’s terminology. “That means the defense was just not looking.” He said that players can set house rules in-game like “slam dunks are worth 10 points” and “the game ends at 10 points” to keep everyone on their toes and paying attention.

That malleability, Rogers said, is one of Videoball‘s greatest strengths, and one that sets it apart from traditional sports. “It’s designed to be everything a regular sport can’t be.” You can’t add another ball to basketball without fundamentally changing the game, Rogers says. There are too many rules, too many stoppages. Videoball is designed for continuous play and with limited, intuitive parameters that make it easy to change the rules for a new experience. 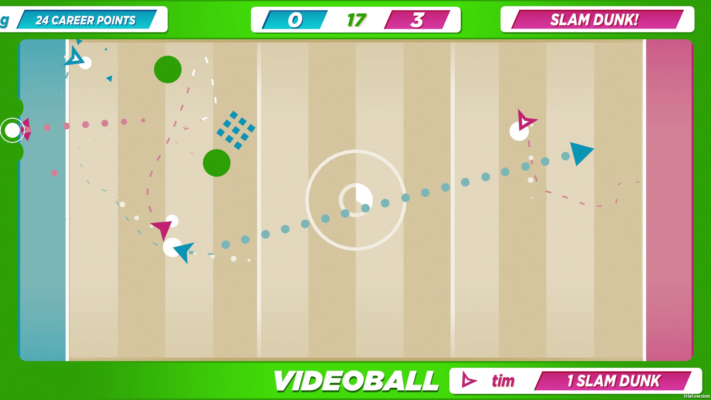 Rogers has made a name for himself with deliberately provocative statements about the game. He likes to say things like, “When you were born, you were already Videoball DLC [downloadable content]. You were already a Videoball ‘character.'” He asserts that to be truly competitive, players will need to run the game at 300 frames per second on a 144Hz monitor, a blissfully uncommon setup. But while those statements are obviously ridiculous — even to Rogers — he’s not saying them (just) to be inflammatory; he’s saying them to illustrate the point that Videoball is, as he puts it, “the sport that everyone can play.”

Rogers doesn’t just see Videoball as a fun video game you play when friends are over; he sees it as a new sport. There is no “story” to Videoball, no “characters” or “universe” or “lore,” because the game is simply a sport like any other, albeit one without the same physical requirements that keep potential players from being able to compete. Selling Videoball without a metaphor layered on top is a move that Rogers is “just terrified” to do in today’s gaming space, but he’s working hard to add new features to make it an easier sell to players on the fence. The most significant yet has been the addition of online play.

“Every popular online game has so much latency in it; you just don’t see it,” Rogers said, explaining that things like 3D graphics and constantly changing perspectives can often hide the lag that pervades through games like Call of Duty — luxuries that Videoball, with its single-screen play and information-dense iconography, doesn’t have. “There is nothing you can hide in this game.”

For Rogers’s small team, designing online play that can beat inherent latency to give players a worthwhile experience is impossible, which is where Iron Galaxy has been able to step in to help. He says they’ve “figured it out” and he has high hopes for the online play, though he recognizes the best way to play will always be with friends in-person.

As he talks, Rogers is interrupted by the cheers of the game behind him finishing, a 10-0 beating, exactly the kind of outcome he wants to see.

Videoball will be out this year on PlayStation 4, Xbox One and Steam.