So what is Livelock? It’s a top-down shooter with a Michael Bay’s Transformers look and heavy cooperative elements. You play as one of three characters — Hex, Vanguard or Catalyst — with different strengths and abilities. Hex is your all-around run-and-gunner who can call in a big aerial strike; Vanguard is your heavy-hitter wielding a massive hammer and can project a shield the other characters can hide behind; Catalyst is the support character who can heal everybody. During the demo, I was able to play as Hex, so I spent most of my time mid-range between Vanguard, who was up front swinging that hammer around, and Catalyst, who hung back to take enemies out at range while also stepping in when necessary to heal us.

The controls in Livelock feel exactly like you’d expect them to: click in the left analog stick to sprint, use the analog sticks to move and aim like a dual-joystick shooter, triggers to shoot, etc. They’re borrowing from modern shooter standards, so the game feels immediately familiar and intuitive to control. There was something about the basic act of moving Hex around and spinning him in the proper direction that felt pretty much perfect, and the same goes for the rest of the controls, too. Hex’s guns felt satisfying to shoot, with exactly the right amount of heft, good visual feedback from enemies, and vibrant colors to distinguish easily between weapons from different characters. 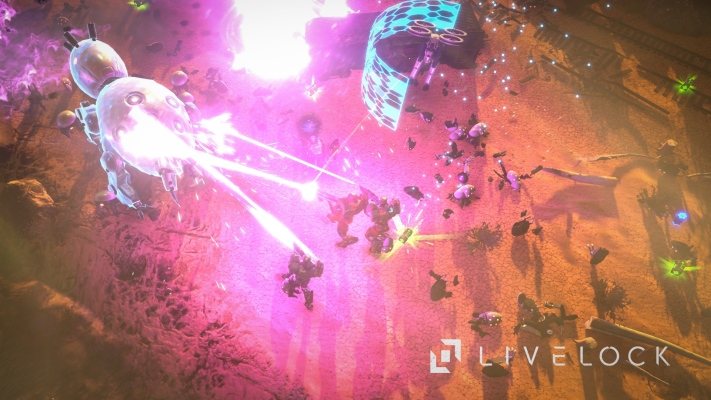 It’s weird, then, that Livelock never really captured me. It’s the curse of doing everything right: it’s boring. Call of Duty games, for instance, consistently feel great every year, but it’s just not always enough to feel great without pushing the boundaries elsewhere. The best parts of any Call of Duty game these days are the ones that surprise us or try something new: the freefall firefight in a crashing plane during Modern Warfare 3 comes to mind. It didn’t change the controls or give you new weapons or anything radical like that; it simply took the existing mechanics and set of expectations and literally turned them on their head.

I spoke with the developers at Tuque Games after my demo and I can attest that they’re clearly talented guys who have spent an insane amount of time refining their game to feel exactly how you’d want it to, and their work has absolutely paid off. I’m just not sure that great controls will be enough for Livelock.

It could’ve been that the enemies weren’t demanding enough from my team and I, so playing on a higher difficulty setting would have made the intricacies in the design stand out. It could’ve been that the early slice we played simply isn’t representative of the rest of the game, and subsequent sections will change up the structure of how missions play out. It even could’ve simply been that playing with friends at home would make the experience much more meaningful than playing with random strangers at a convention. Whatever it was, I really hope the full game is able to deliver on the excellent work the guys at Tuque Games have done.

Livelock will be out this year on PlayStation 4, Xbox One and Steam.