The relaunched Shadow Warrior was everything it should have been — a gory fast-action kill-fest with demons and monsters, snarky humor and a wonderfully dick-ish anti-hero.  Shadow Warrior 2 is more of the same but expanded in every direction possible, with more weapons and a new power-up system for them, intricate levels that come in hand-designed and procedural flavors, and plenty of side-quests to chase after.  Chasing after upgrades and grinding for loot is even made better by the addition of up to four-players working together in co-op.  Lo Wang’s world has gone a little bit demonic since his last adventure and while there’s no chance of fixing what’s been broken, it makes for a good variety of enemies to sharpen his sword skills on.

It’s been five years since the end of Shadow Warrior and saving the world didn’t really pay out for Lo Wang.  He’s living at the edges of society taking on odd jobs that require his particularly bloody skill-set, and when one goes wrong it leaves him with a new mental passenger to take the place of the last Shadow Warrior’s Koji.  Kamiko isn’t particularly thrilled to be there but the pair are stuck with each other, and the PAX East mission is to find a collection of items to heal her body as part of the process of getting the two separated.  With a fetch-quest in hand it’s off to kill some demons, because hitting the drug store just isn’t going to cut it. 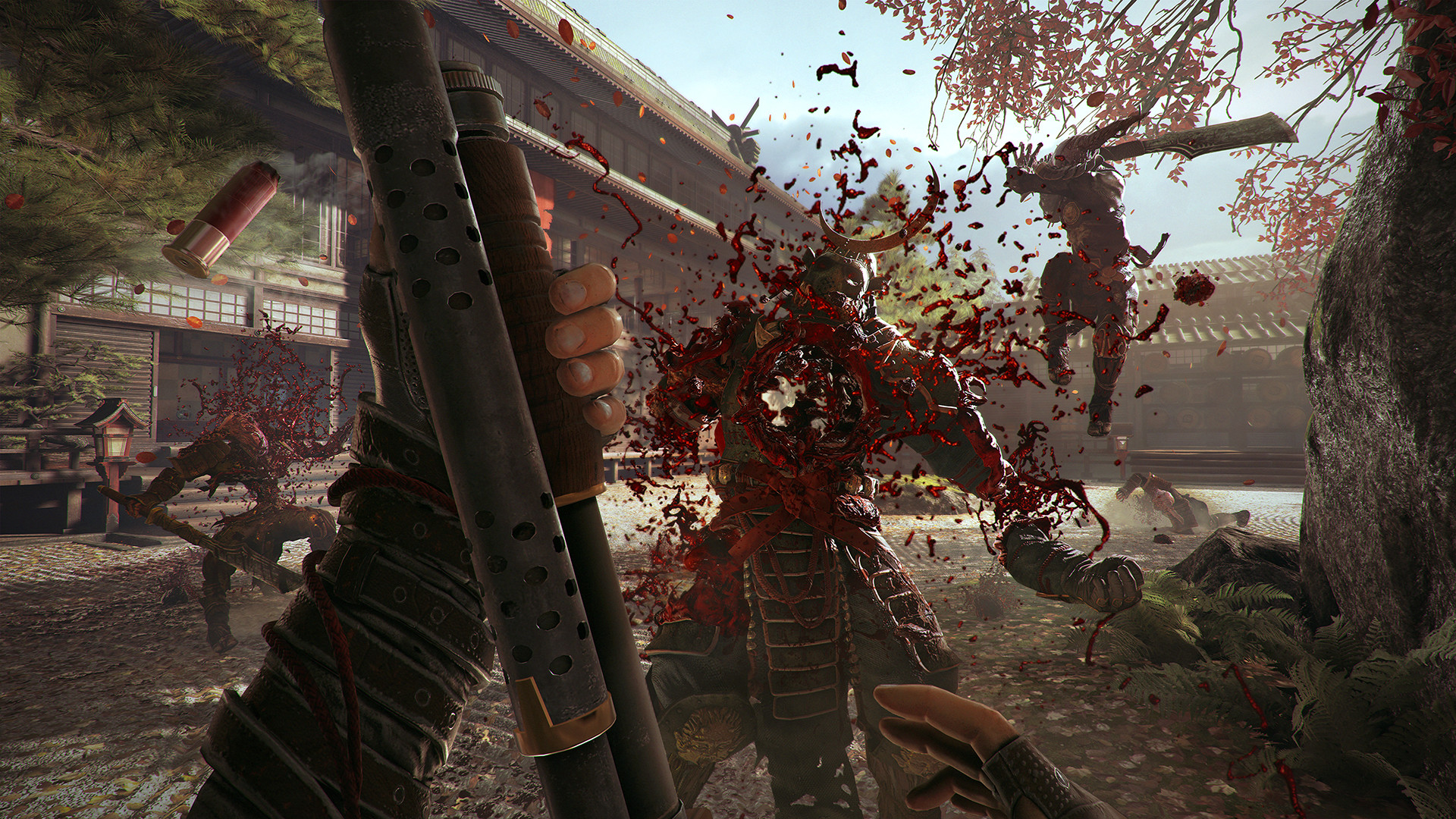 The changes to Shadow Warrior 2 are apparent from the start.  The level is giant and open, and Lo Wang’s double-jump is coupled with the ability to grab on to ledges and pull himself up.  He’s also no long got a stamina bar to limit his running time and doesn’t take fall damage, so in addition to wide-open level design they’re almost as much vertical exploration as there is horizontal.  The other big feature of level design is the procedural nature of certain aspects of it, which doesn’t mean pure randomization of the terrain but rather that items, objectives, and monsters will appear in different places and mixes when you re-enter an area.  There are even aesthetic changes such as time of day and weather effects, with trees swaying wildly in the harsh wind and rain.

The demo came with a large number of weapons to use, all of which are capable of turning demons into splattery piles of random body parts, but like the previous game it’s always hard to put away the katana just because it’s so much fun to use.  Still, there’s always time for twin uzis or the incredible stopping power of a bullet from a demonic .45.  Of course, the katana has a number of special moves such as a power thrust, slashing wave to give it a bit more range, or a spinning slash to clear out the enemy crush when you’re mobbed from all sides.  Or maybe you just want to impale enemies on vicious black spikes summoned from the earth and toss an electric grenade in their ugly snarling faces.  The point is there are a lot of combat options open at any one time, because while Lo Wang may not be the most heroic protagonist to ever tear through a monstrous army that doesn’t prevent him from being pure badass. 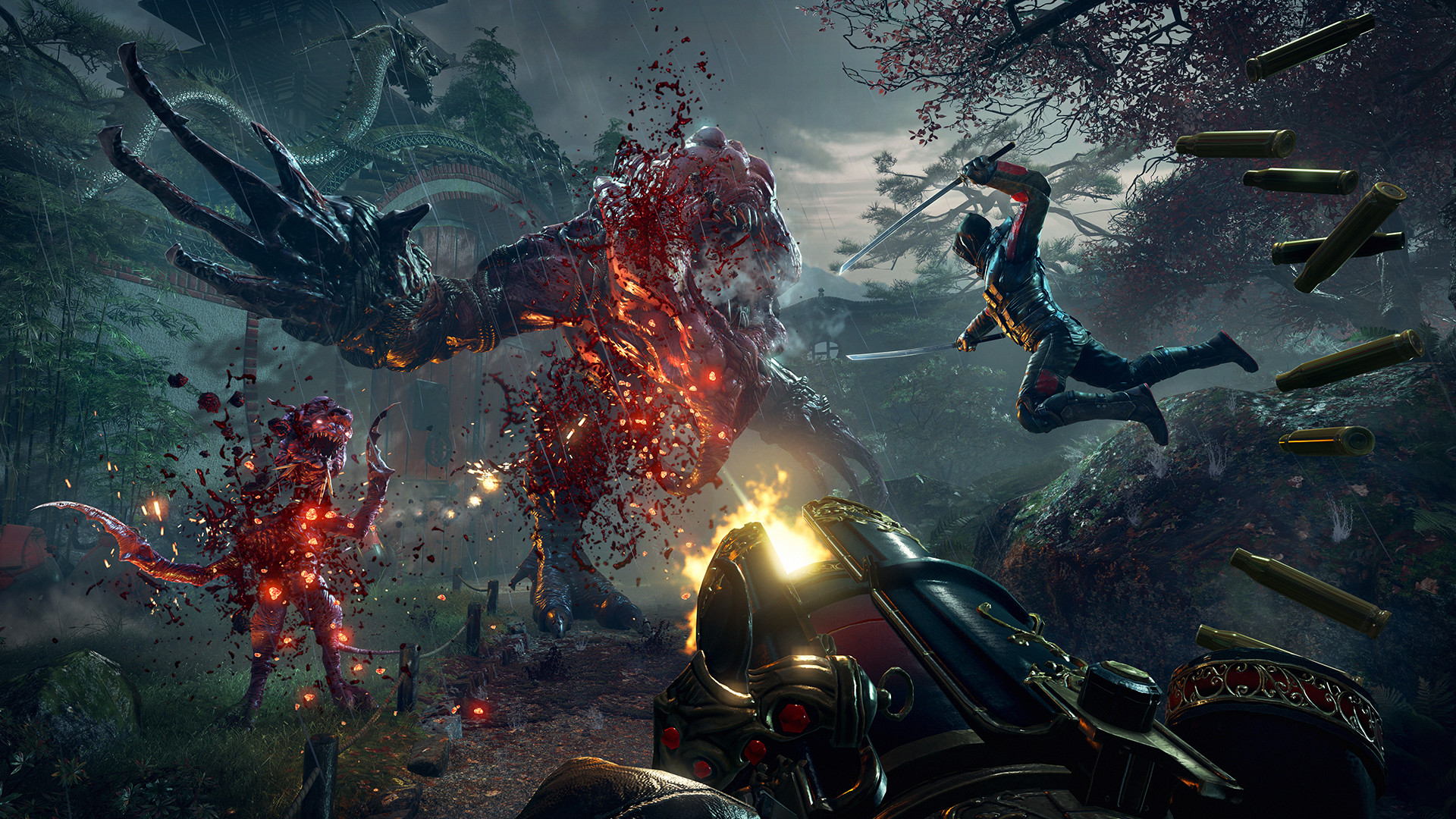 If that sounds a lot like the Shadow Warrior reboot, well, that’s because it is.  Enhanced, expanded and given the full sequel update, of course, but at heart this is still a game about carving, shooting and exploding demons into bloody chunks.  The world is more open and Lo Wang’s move-set allows far more vertical exploration, the weapon count is now over seventy, and the weapon upgrade system lets you mix and match abilities to personalize their deadly effects, but it’s all in service to stylishly killing a whole lot of monsters before they do the same thing to you.  Shadow Warrior 2 is juvenile, violent, bloody up to its armpits and exactly what I would have hoped to see from a sequel.