Due to fact I have never had any communication with Thomas Happ, I cannot claim that there is any truth to this.  That being said, I like to imagine a young Happ being completely enamored with Super Metroid, and after completing the game he eagerly waits for the follow up.  Over the years he hopes with childlike anticipation during every major game announcement like Linus spending every Halloween in a pumpkin patch waiting for the Great Pumpkin.  Seasons change, years pass and the only constant is crushing disappointment.  Over time we see Metroid given the reboot treatment as a first-person shooter, with a couple titles in the vintage style only being released for handheld systems.  Linus’s baseless faith in the Great Pumpkin leads to continued disappointed.  Never once the thought even occurs to him that he could create his own Frankenstein style Great Pumpkin from existing pumpkins.  This is where Happ demonstrates he superiority over the passive and possibly delusional Peanuts character:  he realizes that he is only going to get a classic style Metroid game if he makes it himself and thus we have the acclaimed Axiom Verge.

While it is easy to make comparisons between the two, saying Axiom Verge is a fan made Metroid is not exactly accurate.  There are similarities between the two, even the drone upgrade serves a similar function to the morph ball in that it allows access through narrow passages to otherwise off limits areas.  Part of the success of Axiom Verge is that Happ was able to craft his own universe for this, complete with its own creatures, characters, weapons, and visual style.  Metroid’s game play is an obvious influence, but Axiom Verge is its own unique entity.

Axiom Verge is part of a trend I would like to see continue in the gaming world.  2D action platformers are a rarity in today’s market, but prior to the second half of the 1990’s when Congress ratified a bill requiring all classic game franchises make a conversion to a 3D format, this was somewhat of the standard format for games.  And despite there being copious amounts of good 3D games today, this conversion was not always good.  There were some gems as a result of this, such as Super Mario 64 but for every successful conversion to the third dimension there were countless abominations like Castlevania 64.  Seeing what was done to my beloved Dracula killing franchise for the N64 was somewhat of a traumatic experience. 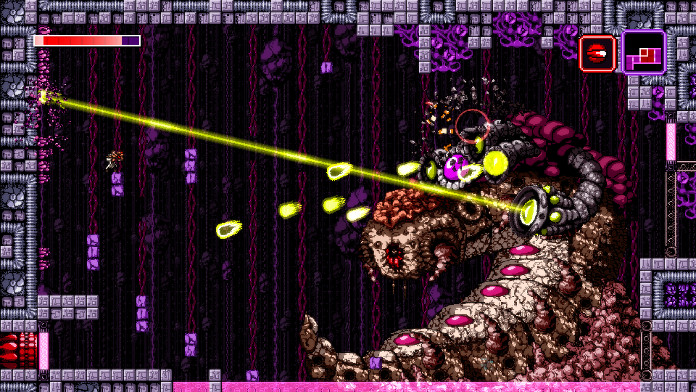 As the technology improved and developers became better at making 3D games not suck, 2D games quickly became an endangered species, rarely seen in the wild outside of the safe confines of sanctuary that was handheld Nintendo systems.  This was the natural course of events anyone should have expected.  With technology’s limits expanding and the greying of gamers, continuing to treat games as being simple toys only for kids would be foolishness on the industry’s part.  Games have became more cinematic and story driven than they ever were, and this is a great thing.  Games like The Last of Us, The Witcher 3, the Mass Effect trilogy, and so on are games no one could envision existing back in the days when Sega was trying to sell us on the fact that Genesis does what Nintendon’t.

In recent years indie games’ popularity has increased immensely.  Sure, there are many frighteningly awful things lurking in the unsavory sections of Steam Greenlight, but there are many indie titles that hold there own against the major releases.  Indie developers do not have staff members whose numbers could fill an office building, nor do they have hundreds of millions of dollars to devote to marketing and development.  What we have seen coming out of some indie studios are contemporary incarnations of classic game styles.  In addition to Axiom Verge, games like Unepic and Shovel Knight not only use a graphic style reminiscent of the 1980’s but also the same basic gameplay mechanics.  These throwback games are able to be relevant in today’s market because they also incorporate modern elements, such as controls that aren’t limited to two buttons and nonlinear maps that can take well over ten hours to complete.  More importantly, these are quality games and were produced with the same level of care as the major studios.  If someone is trying to push a game that uses primitive graphic technology, the actual game needs to on point, which Axiom Verge and the other games I mentioned deliver in that area. 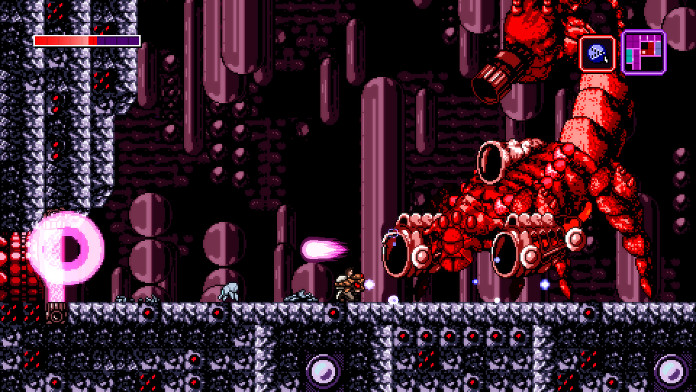 One of the great things about Axiom Verge is I would often wish that while game design advances the old game styles are not forgotten.  The existence of Axiom Verge and its popularity tell me that I am not alone in this.  It was released to critical acclaim on the PC about a year ago.  The PC version was released in a special limited collector’s edition through Indie Box which was probably their fastest selling title.  Axiom Verge is available now on the PlayStation 4 and PS Vita, with the possibility of Xbox One and Wii U down the road.  Amidst all these titles with advanced production, it is refreshing that and 2D game with 8-bit graphics is not only able to exist, but attain this level of success.

Verge is Cross Buy across the Sony platforms, though it does not seem to support Cross Save.  I had some concerns about the Vita port since the PS4 version uses more buttons than PS Vita has.  This is addressed by placing four transparent buttons in the corners of the touch screen.  My personal preference is the controller, but the Vita solution is much less intrusive and more usable than I thought it would be.  It is safe to say neither control scheme is significantly better and it just boils down to whether someone prefers to use a touch screen or not. 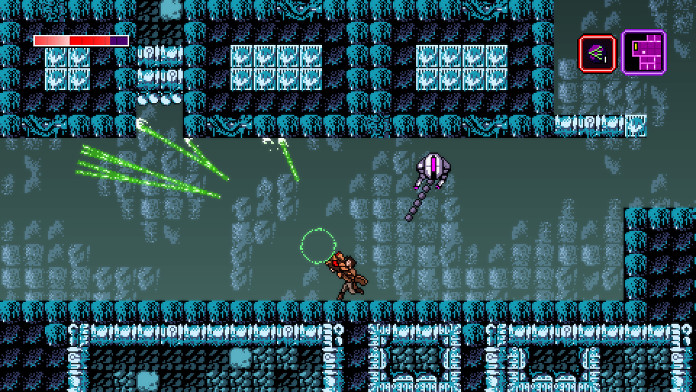 It is great seeing the advancements video games are continuing to make.  It is also great to see it grow as a mainstream form of adult entertainment (get your minds out of the gutter, I didn’t mean it like that).  Titles like Axiom Verge remind us of how games reached the level of popularity they have.  Before fully-rendered cinematic cutscenes with Hollywood actors providing voice overs, games had a simple approach to story telling and many enjoyed them despite the limits of what the technology allowed at the time. The success of Axiom Verge makes me hopeful that in addition to the great new games that showcase what the current PC and Console generation can do, we will continue to see new titles like Axiom Verge that remind us all that power is not what makes a great game.