There are two styles of games that I, and a fair amount of other gamers, are sort of sick of at this point: the Assassin’s Creed-style “check off the boxes” open-world action-adventure and the puzzle-platformer with a twist. For the purpose of this article, which is going to discuss a title that falls into the latter category, we are going to completely ignore the former group of games. Yes, we know that a great deal of Ubisoft and WB open-world games feel exactly the same, and while it’s possible to go on a rant for hours about this subject, that’s not why we’re here.

The puzzle-platformer with a twist became one of the hallmarks of the independent games scene, causing the market to become over-saturated. It seemed that hundreds and hundreds of independent developers were hoping to create the next Braid or Limbo instead of trying to become their own thing. Make no mistake, there are plenty of awesome independent puzzle-platformers floating around out there, but there’s something about the sheer number of them that makes them a bit stale. On a personal note, my single biggest pet peeve in this genre is when puzzle sections and platforming sections aren’t blended whatsoever. There’s nothing more frustrating in one of these titles than going through an awesome platforming section, only to have to stop progressing completely in order to solve a puzzle. With all of that said, Hue, the upcoming title from Fiddlesticks, takes a color-swapping mechanic we’ve seen in titles like 13AM’s Runbow and wraps an entire narrative around it in a fascinating way. When someone who feels jaded towards an entire genre finds a particular game in said genre fascinating, the developers have to be doing something right.

Hue tells the story of, well, Hue, the son of a famous scientist who specialized in allowing the citizens of a grayscale world to see in color. Hue’s mother, Anne, developed a wheel that grants its user the ability to see whichever color is selected on it. Once Hue sets off on his journey, he finds more and more pieces of his mother’s color wheel, which allows him to see more and more color in the environment. Much like the aforementioned party title Runbow, the main hook of Hue is that the color wheel will allow you to change the background of the environment, thus causing certain colored objects to disappear. For instance, if you see a red box on the horizon and use the wheel to make the background red, the box will vanish. While this mechanic certainly allows for a number of simple puzzles, one only has to watch the above trailer to see how things can quickly become crazy (for instance: color-swapping in midair). 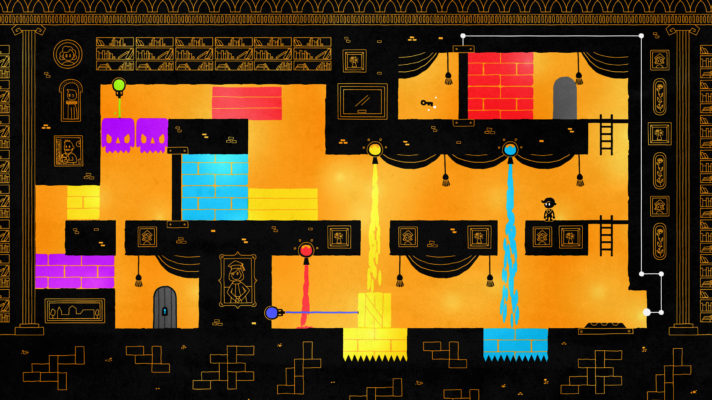 Now, this description, while interesting, doesn’t necessarily differentiate Hue from games that full under the puzzle-platformer with a twist umbrella. There’s one very specific reason, however, why you should keep this gorgeous title on your radar: despite the fact that Hue is an exceptionally bright and colorful game, there’s a distinct sense of melancholy present in every inch of this world. This dichotomy between Hue‘s appearance and mood has the potential to make it a title that elicits a tangible emotional reaction from its players. Of course, whether or not this comes true is going to depend on the quality of Hue‘s narrative, which, although promising, could wind up being as vapid as some of the more forgettable puzzle-platformers that seem to be everywhere on Steam. Still, if you’re someone who is trying to find a reason to love the puzzle-platformer genre after its heyday seems to have come and gone, you could do a whole lot worse than Hue, which is currently set to launch on PC, Xbox One, PlayStation 4 and Vita later this year.

For more on Hue, be sure to check out our coverage from EGX Rezzed.