When I first found out that Four Circle Interactive and Curve Digital were remastering 10 Second Ninja, I initially felt vibes of what TinyBuild did with the disappointing No Time to Explain. Granted, 10 Second Ninja is a better game than the original No Time to Explain (though both were disappointing), but it still feels like a game that didn’t necessarily need a remastering. After spending some time with 10 Second Ninja X, which is set to launch this Summer, however, it’s clear that it is far more than a simple re-skin for the maddening action-puzzle title. With sixty new levels, remastered versions of the original 10 Second Ninja stages and full leaderboard support, this feels far more like a new title than a mere bump up in visual quality. After all, there’s far more new stuff in 10 Second Ninja X than there is old content and the core gameplay is strong enough to warrant giving it a shot (even if you’ve played the original).

If you know the title of 10 Second Ninja X, you pretty much know the premise. You play as an adorable ninja who has to destroy every enemy in a given stage within ten seconds. At your disposal is a sword, which you can swing as many times as you’d like, and three shurkiens that you can kill foes with at a distance. Before every stage, you have the opportunity to survey your surroundings in order to plan out the quickest path as humanly possible. Despite the fact that you have up to ten seconds to complete the stage, 10 Second Ninja X boasts a three-star system, with each rating having a maximum time threshold, so if you hope to do more than the absolute minimum, this surveying portion is absolutely critical. I did find that looking through each stage beforehand made the proceedings feel a bit more overwhelming than I would like in a title based purely on speed and reflexes, though anyone who has played the original knows that this is secretly more of a puzzle title than it is a traditional platformer.

If you’re not the type of person who enjoys repeating stages over and over again, then you’re absolutely not part of 10 Second Ninja X‘s audience, despite how tight the remastered effort’s gameplay is. I’m someone who gets a fair amount of anxiety from three-star systems for whatever reason, so 10 Second Ninja X, despite how instantly addictive it is, isn’t necessarily the type of title that I would flock to immediately. With that said, it’s blatantly clear that Four Circle Interactive has taken all of the criticism of the original title to heart, as X was far more fun to play than I had initially anticipated, especially coming off of the original’s underwhelming critical reception. 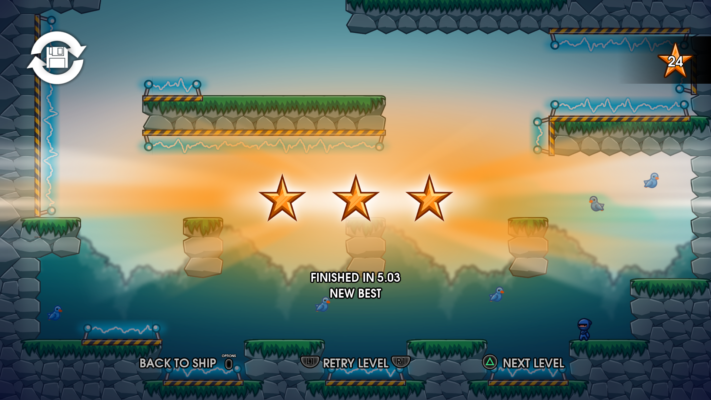 10 Second Ninja X is currently set to release on PC, PlayStation 4, Xbox One and Vita this summer, with the latter platform likely the most obvious candidate to be the ideal platform. After all, the Vita, despite not living up to the initial promise that Sony put out there, is perfect for both extended play sessions and bursts of quick pick up and play fun, which seems to be exactly what 10 Second Ninja X is going for. There’s something oddly addictive about games with automatic restart options that pride themselves on perfect execution, and this is going to lend itself perfectly to the handheld. It’s clear that an established independent publisher like Curve Digital would not have attached its name to the remake of the underwhelming 2014 title if it did not believe in its promise, and after spending time with 10 Second Ninja X, it’s obvious that this is what Four Circle Interactive initially imagined its frenetic platformer would wind up being.