Everything I’ve ever heard about the series makes it sound like I’d probably like Monster Hunter if I ever really invested in one, but from the outside, they sound about as intimidating as From Software’s Souls series must sound to newcomers there. The people I’ve heard gush about Monster Hunter profess to playing games in the series for upwards of 200 hours each and that’s way more time than I’m able to give. Hearing that, I assumed they were kind of games that only get fun once you’ve put in a good 40 hours or so.

But Monster Hunter Generations managed to be immediately satisfying, even to a newcomer like myself.

Generations is aiming to be a bridge between longtime fans and players new to the series. It’s focusing on improving the onboarding process through better tutorials and a slightly more straightforward approach that hopefully can alleviate the intimidated feeling I described earlier. For me, this focus meant I was able to jump in and hit the ground running without too much trouble thanks to better explanations of Monster Hunter’s deeper mechanics, like why I should stop to sharpen my weapons in the middle of a fight. 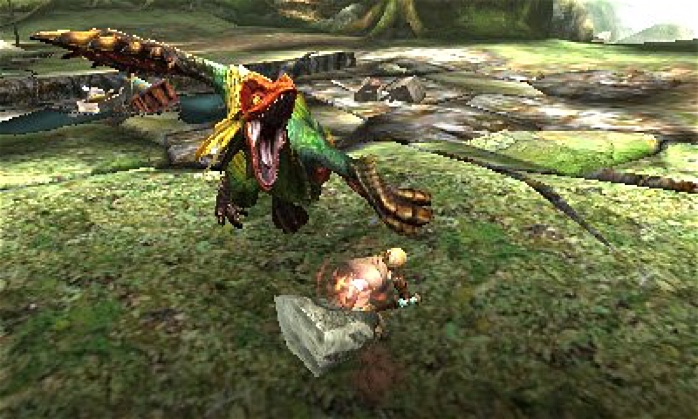 Generations, of course, tasks you with tracking down and taking on powerful beasts. You can find these monsters in an overworld that to me looked and felt a bit like traveling through Hyrule Field in The Legend of Zelda: Ocarina of Time; specific areas of the map were sectioned off, so if you don’t kill a monster fast enough, it has the chance to run off to a new section and escape. If that happens, you’ll need to chase down the monster into a new area of the map, and finish the job. Whenever the monster in Capcom’s demo managed to escape me, I felt compelled to follow it; it’s a sense of victory just barely escaping your grasp over and over, and it makes it all the more satisfying to finally win.

You’ll work together with a team, either offline or online, to fight the monsters. I wasn’t able to get online during my demo of the game, so I relied on my two offline cat buddies to help me out. Despite only being AI teammates, I found both to be invaluable as we all attacked the monster from different sides to overwhelm it or they distracted it long enough for me to heal up or sharpen my blades.

There’s a solid, hefty feel to the combat that existing fans will be familiar with, but there are a handful of changes and new mechanics. During the demo I played a character with twin blades for light and fast combos, but even still, there were consequences to a wayward attack or a whiffed special move, so I quickly learned the importance of considering each attack and not treating the game like a standard button-masher. I still wouldn’t put it on the same level as a Souls game in terms of the depth or precision to the combat — but of course, I know I’m a little out of my depth in that opinion. If a Monster Hunter fan played Dark Souls for twenty minutes for the first time and then told me it just didn’t feel as deep, I’d probably scoff at them, too.

Monster Hunter Generations looks neat. If you’re a newcomer who has always thought of it as too complex and established a series, keep an open mind. Generations launches on Nintendo 3DS this summer.

[Ed. note: A previous version of this story cited the ability to mount monsters as a new mechanic, but this is an existing ability, so the reference has been removed.]