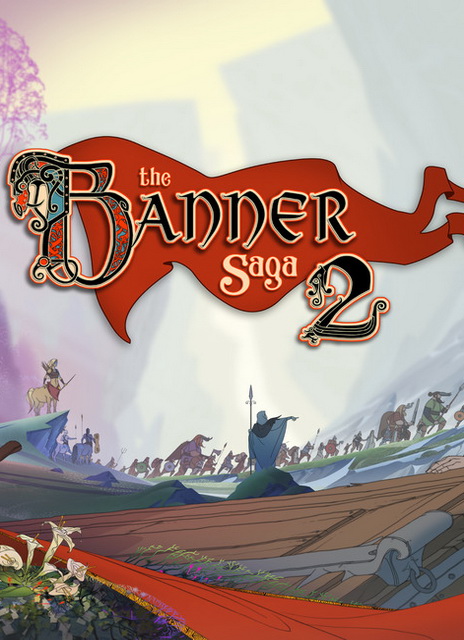 Editor’s Note: Because The Banner Saga 2 is a direct continuation of its predecessor, this review contains major spoilers for The Banner Saga. If you have not played the original 2014 title, turn away now.

The Banner Saga franchise feels like a nerd’s dream.

Essentially the marriage between Game of Thrones, XCOM and Oregon Trail, the original entry in the series was one of 2014’s indie darlings. Of course, the fact that it ended on a massive cliffhanger, with either Rook or Alette dying at the hand of the Sundr Bellower, was both thrilling and mildly frustrating to everyone who had the chance to play it over the past two years. The Banner Saga 2 picks up exactly where its predecessor leaves off, with either Rook or Alette (depending on your final choice) leading the remainder of your clan. By and large, everything about The Banner Saga 2 is better than the original title, with the exception of an unfortunate final encounter. The combination of deeper, more exciting combat, a story with stronger twists and turns and the same breathtaking art design make this a sequel one not to be missed. While an even bigger cliffhanger at the end proves that The Banner Saga will be best experienced as, well, a saga, Stoic’s second entry is everything that one could hope for and more.

It’s worth noting that in my original playthrough of The Banner Saga, Rook passed away, leaving Allette to lead your massive clan on the way to the human capital of Arberrang. There are obviously thousands of players out there who will experience their main playthrough of The Banner Saga 2 through the eyes of Rook, which is absolutely valid, but my main choices dictate otherwise. For the remainder of this review, I’ll refer to the main group as “Alette’s clan,” for the sake of simplicity and clarity. Yes, you have the ability to play the entire campaign from Rook’s perspective, but I’m going to stray away from typing out both heroes simply for the sake of readability. With that bit of housekeeping out of the way, let’s dive into exactly what makes The Banner Saga 2 such a special experience. 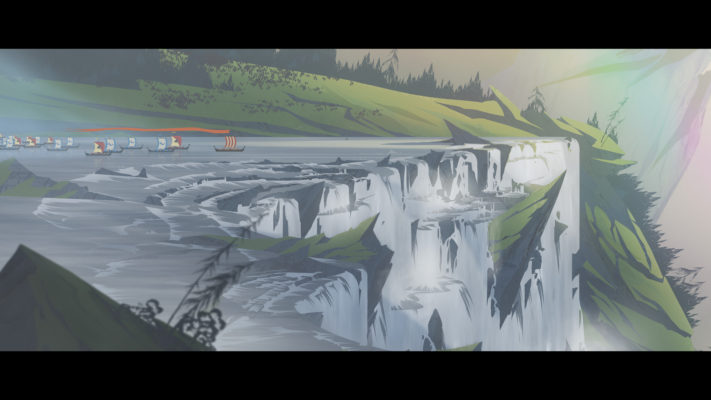 Much like the first title, The Banner Saga 2 gives players insight into the war against the Dredge and the world-ending Serpent through two perspectives. Alette’s clan, still strong from the triumph over Bellower, is making its way to the aforementioned human capital of Arberrang in search of sanctuary from the looming masses of the Dredge. Along the way, players join up with the Ravens, led by Bolverk, who made their first appearance at the end of the first game. The second perspective is eventually told through Bolverk after the Ravens split off, and this actually turns out to be the side of the story with the most dramatic revelations seen in the series thus far. There’s a staunch moral dichotomy between the two parties, with the Ravens making decisions based on their gold-hungry mercenary desires, with their counterparts in Alette’s clan generally trying to do the “right” thing in any given situation. Granted, you can absolutely play through The Banner Saga 2 from the opposite respective sides of the moral spectrum, which certainly speaks to how dynamic and immersive of a title it is as a whole, but the idea of having  both a hero and an anti-hero on either side is downright fascinating.

Without giving away any of the twists, the existential subplots that lingered under the surface of The Banner Saga begin to come to a head throughout the course of The Banner Saga 2. Though The Banner Saga 3 is clearly going to be loaded with revelations both big and small, but there is a fair amount of setup in this entry that answers questions from the very first title. There’s often an issue with the second entry in any trilogy, be it movies, books or video games, feeling like it only exists in order to set up the grand finale. While there is certainly a fair amount of hinting at the major twists and turns to come, there are a number of mic-drop moments that will make you question everything that you know about the general lore of The Banner Saga universe. One of the crowning achievements of Stoic’s development on this gorgeous series is that your choices, both large and small, feel like they matter far more than in high fantasy game series not named The Witcher. From deciding whether or not you should spend your Renown on upgrading your characters or food for your clan, all the way to deciding whether or not to help villagers who appear to be in need, there’s a decided weight to every one of your actions. Make no mistake, if you loved making tough decisions throughout the course of The Banner Saga, you’ll be happy to know that the consequences of even your smallest actions play major roles in your characters’ stories. 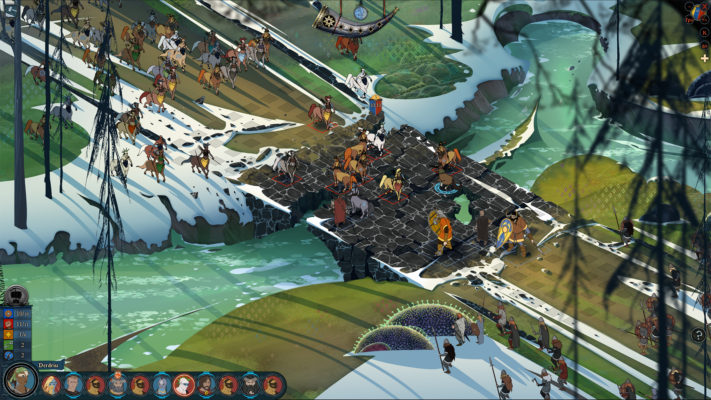 The single biggest complaint of the first entry in the franchise didn’t center around the story or the Oregon Trail-style multiple choice options littered throughout the campaign. Despite the fact that The Banner Saga‘s combat was engaging and occasionally thrilling, the general consensus was that it lacked the same level of variety as its narrative. While this is still a turn-based strategy game through and through, Stoic has made a number of improvements to the combat system that makes each battle feel like much less of a slog. To start, all of your characters start out at higher levels, with the main set of characters from the previous entry generally starting at level five. The result of this is a set of battles that feel far more intense, as you’re going to wind up doing and taking far more damage than ever before (oh, and there are more high level skills to use on the battlefield). Much like in the final Bellower fight in Chapter Seven of The Banner Saga, The Banner Saga 2 features a number of battles where the end goal isn’t to simply destroy everyone on the battlefield. Sure, there are still a number of engagements where this is the case, but there’s also a combination of more boss-centric encounters, simply surviving for an extended period of time and destroying obstacles in your clan’s path.

The Banner Saga 2 also features a new playable race, the Horseborn, a centaur-like group that can move a number of spaces after attacking an enemy, as well as characters that can straight-up call bears into the fight. Add this to breakable barriers in certain stages, and there’s definitely a sense that you’re using your mind more in The Banner Saga 2. We’re definitely not talking about XCOM 2 levels of depth here, but the combination of an awesome battle system and a downright outstanding story make for one of the best gaming experiences of the year thus far. However, the one sore spot in The Banner Saga 2 comes during the final boss fight, which ends up feeling like far more of a slog than the rest of the eight-to-twelve hours of gameplay. Essentially a one-on-one battle, players have to use the power of unlimited movement to guide the boss into tiles that have temporary icons indicating that lightening will strike in two turns (otherwise some frustrating health regeneration takes place). The sheer random nature of the lightening tiles and your own limited health pool winds up making the entire encounter feel like a crapshoot, which doesn’t leave the best final impression. At the end of the day, this is merely five-to-fifteen minutes of annoyance in a downright stunning game, but it’s still a shame that the final playable portion of The Banner Saga 2 is its weakest portion. 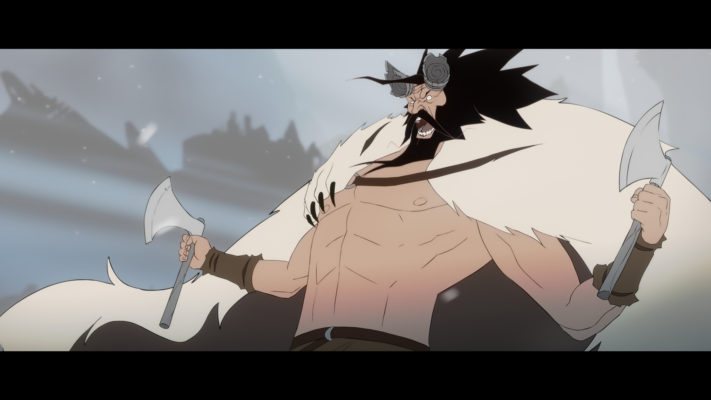 Outside of its disappointing final battle, The Banner Saga 2 is a masterpiece of storytelling and engaging turn-based strategy combat. The combination of a dedicated sense of player agency and a stark moral dichotomy between the two sides of the narrative make for an experience that will immediately prompt thousands to start a countdown until The Banner Saga 3. Whenever a sequel is announced for a phenomenal title, there’s always a sense that things could go horribly wrong and ruin the general perception surrounding the original game. Not only does The Banner Saga 2 meet every expectation that one could have following the first game, but it exceeds them in a number of tangible areas. Oh, and let’s not forget that it’s one of the most gorgeous animated games that the industry has ever seen and that has to count for something. A firm early nominee for story-based end-of-the-year awards, The Banner Saga 2 is an absolute must play for anyone with even a passing interest in high fantasy or strategy games.