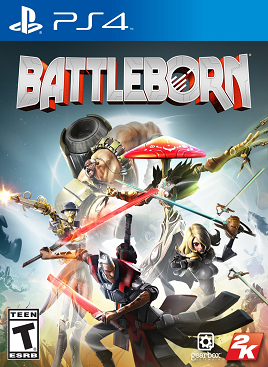 With all due respect to Gearbox, there are reasons for the general public to have been wary of their next big title. Though Brothers in Arms was (and could still be) a great series, the recent missteps with Duke Nukem Forever and Aliens: Colonial Marines justify the pockets of the gaming populace assuming that the well was tapped and the studio will just rest on the success of the Borderlands series. It doesn’t help that the run up to this, their next big game, featured some rather bizarre public facing statements that put more than a few people off (what is calling a game “hobby grade” really supposed to confer?) In the end, though, they nailed it. Battleborn is a toy box filled to the brim with style and so much substance. It is my new obsession.

Being a character-based shooter requires, at its base, featuring characters worth using. It’s a good thing that the title excels here. With twenty-five selectable characters, having some of them be duds would be understandable, but none of them are. Each character is brimming with personality, extremely useful and fun to use. The design philosophy was to make everyone “over-powered.” In practice, all of the characters fill their roles nicely and offer a unique experience when using them, even going from player to player.

The playstyle differences are due to the helix system. Like a MOBA, each character starts the match or campaign stage at level one. Experience points are quickly gained via a numerous different actions. Every time the character levels up, a new perk can be chosen, capping out at level ten. While there are only two choices to be made per level, they tend to vary wildly, making for some interesting builds. For example, when playing Montana, I liked to switch his Hailstorm special to cause damage over time with fire. My opponent chose to bolster the slowing rate properties of ice instead, resulting in a slightly different playstyle. As these add up, they change the make up of the character overall. One player may use Montana’s Lumberjack Dash to push into the fray more often and focus on that. Others might prefer to use his minigun to keep others at a distance. 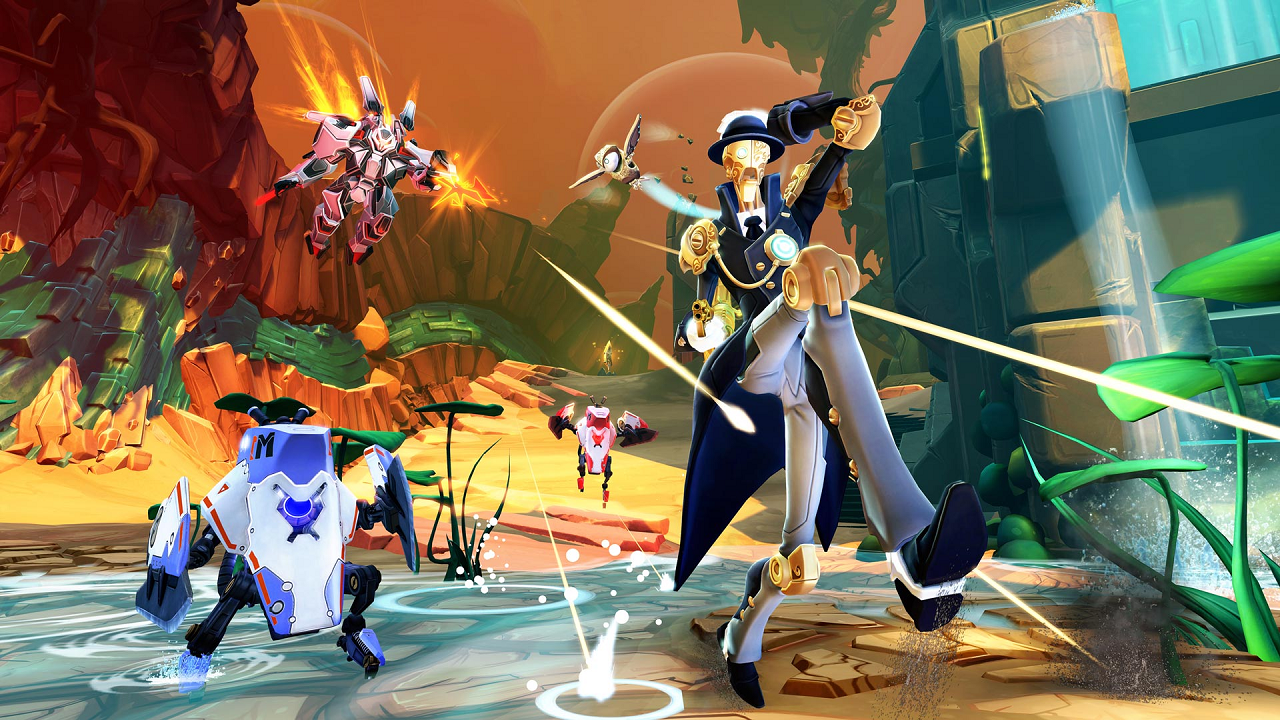 The gear system needs to be factored in as well. After hitting the third Command Rank (read: Overall player level), players can equip items that can drastically affect how a character plays. These need to be activated in match by using shards, a currency that can also be used for buildables, like automated turrets and healing stations. My Montana is currently loaded up with damage boosters. Thus, my tank that is there to harry and soak up hits for other players is suddenly dishing out high DPS, much to my opponents’ dismay. It’s a fun, addictive cycle.

All the characters and the loot in the world wouldn’t mean a thing if the game itself wasn’t fun to play. This is where Battleborn truly shines. Equal parts story campaign and adversarial playground, the play modes on offer have enough variety to keep the title spinning on computers and consoles for a long time to come. 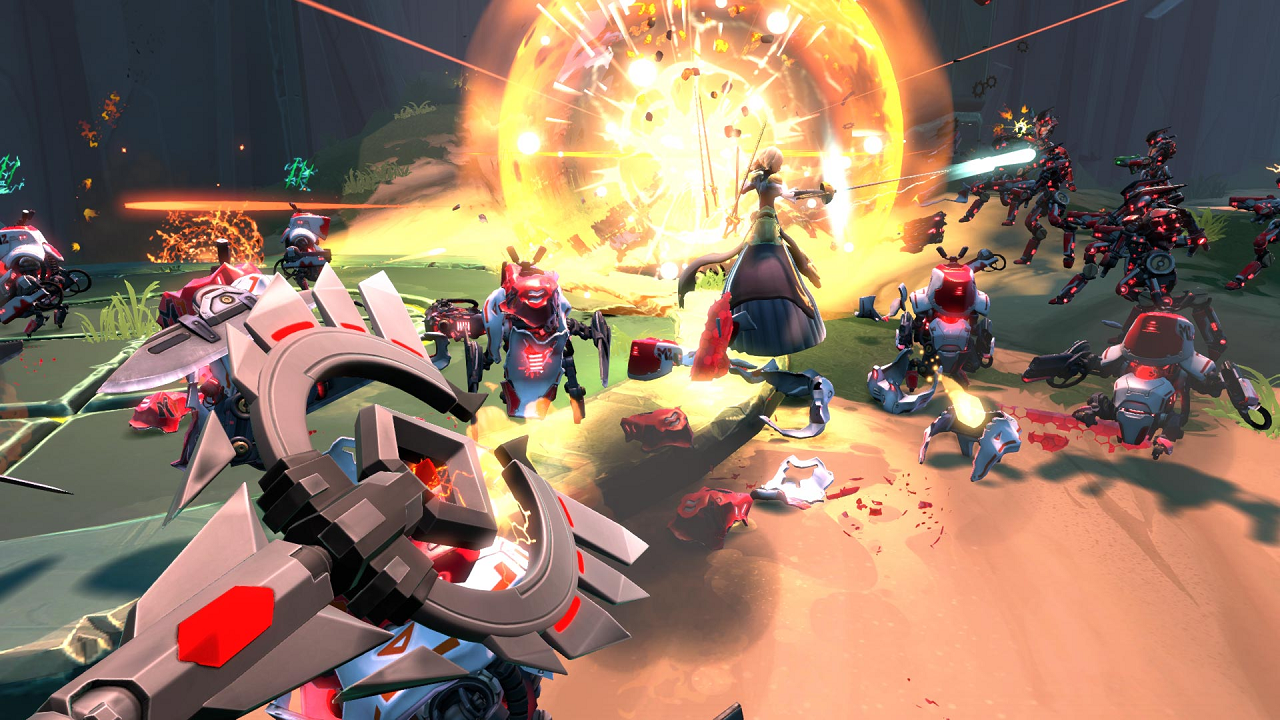 While both facets are strong, the adversarial mode is the better of the two. This is broken up into three types, with two unique maps a piece, offering six maps total out of the box. The first is Capture, which is the tried and true map domination style of game. There are three spots on the map that generate points for the team that is currently controlling it. The first team to reach one thousand points wins the match. There are buildables around the map to allow for defense, but the rules of this game mode itself are nothing that has not been done in many other first person shooters prior. This should not be taken as a complaint, as it is a fantastic mode for veterans of first-person shooters. The rules are familiar, but the variety of characters shakes the whole thing up. These maps get tense and equally matched teams will be seeing quite a bit of push and pull when trying to one up each other.

The second adversarial mode is Meltdown. In this one, players need to escort AI robot minions to grinders for points, while preventing the other team from doing the same. This forces a simultaneous attack/defend structure, where both must be accomplished at once when the forces meet in the middle. There are two lanes where two separate groups of the minions travel, making it a juggling act for each team of five players. I had a grand time picking off the enemy’s support structures as fast as they could build them and using each map’s many nooks and crannies to employ hit and run tactics as Marquis while other players slugged it out. That, or using Isic’s turret mode to completely shut down a lane for the other team. 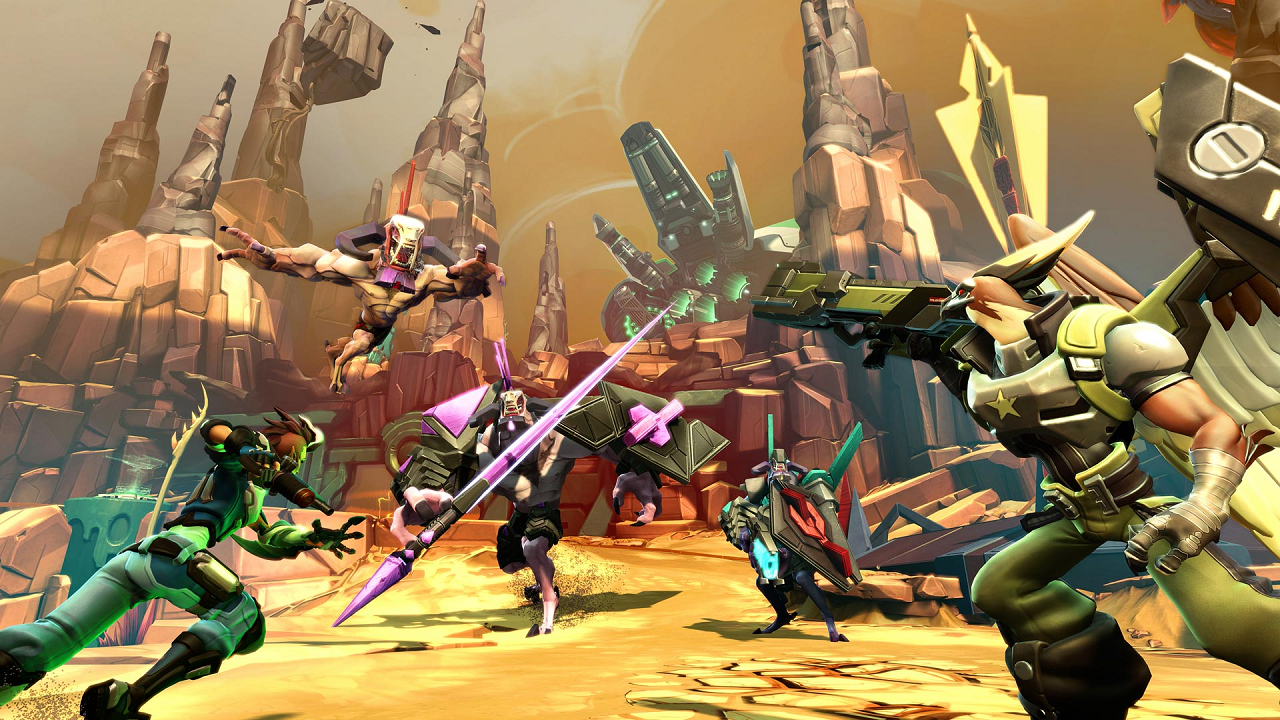 The final mode is my personal pick for the best: Incursion. This mode is the most like a MOBA, where each team has two sentinels that must be protected. The way to defeat these spiderbots is to escort robotic minions their way. Once they reach the sentinel, they can take down its shields. With this done, players can then dole out the damage. This mode also requires a healthy balance of attack and defense, but the single lane that is used in this mode means that there is always a discernible battle line that can be pushed in either direction by good team play and/or the a standout player reading the match and striking at the right moment. The opportunities for players to shine together and separately makes for an addictive match mode.

This hasn’t even touched on the campaign mode, which tells the story of the last star and the heroes struggle to defend it from the nefarious Rendain. Each level is set up to feel like an episode of a Saturday morning cartoon, with an arcing plot and many rises and crescendos in the pacing. While the level count might seem paltry, they are intended to be repeatable. The best way to think about these stages is as a raid in an MMO. Each stage is long, with many bosses to take down and challenges to complete. There are also numerous pieces of gear laying about to add to the player’s stash. Since each hero plays differently, each play through feels like a new experience. 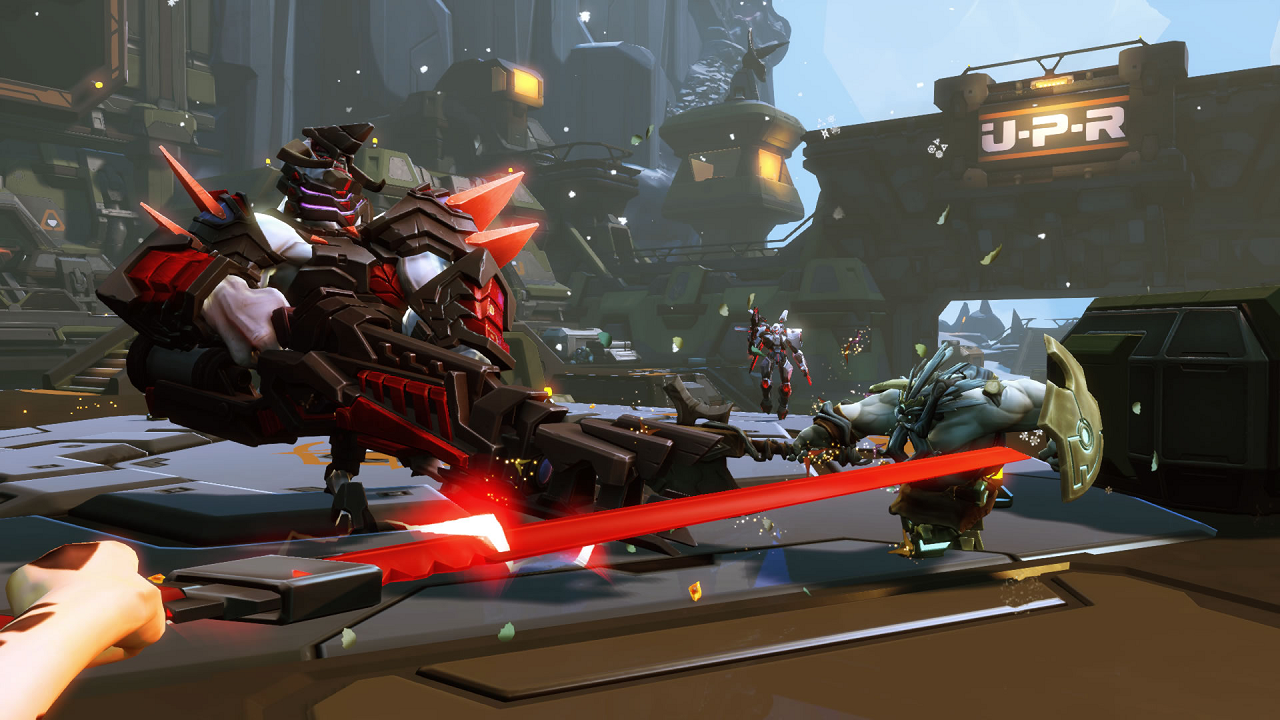 The writing in the story mode is rather well done overall. While there are some instances that feel like they are trying too hard to be funny (hello, Kleese), the writers at Gearbox managed to create a funny script. Geoff, a robot boss that wants to be a spider, was an early stand out, but there are tons of quirky moments that can warm even the coldest of hearts the first time through.

The last four words of the previous sentence is telling. The structure of the game is such that tackling these stages multiple times is encouraged. Each character has a story progress page with four medals to be earned per stage, with bronze through gold variations. Making the cutscenes and humor stings unskippable with this set up is a terrible design idea. I was getting annoyed with it when playing co-op with a friend who just picked up the game. He didn’t quite have a handle on his character yet, which meant that we both went down and ran out of lives due to the scaling difficulty. That meant that we had to re-watch the same cutscene and be held up by the same dialogue. I get that Gearbox spent a lot of money putting these together, but I don’t need to see it over and over. 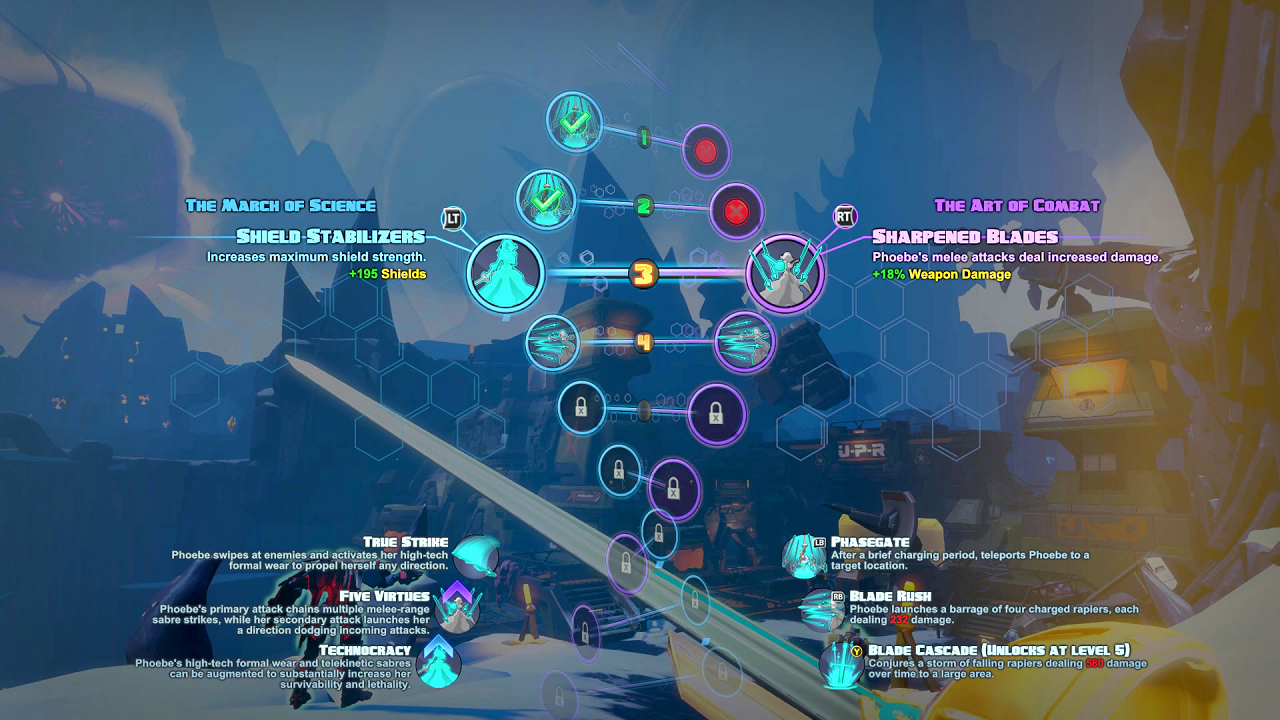 The other issue is that the campaign just isn’t as fun when playing solo. There have been plenty of games that have equal value whether playing alone or cooperatively. Battleborn isn’t one of them. While the difficulty does ramp down to accommodate one player, areas that are engrossing in multiplayer can be tedious slogs alone.

Still, these are are reasonably minor issues in an otherwise overstuffed package. There is an addictive cycle to be found in leveling the overall player rank, working on leveling each individual character’s meta rank and unlocking lore pieces, and completing challenges to earn new titles to display to the world. (I stuck with “Helping Hand” for a while, but have started earning up some others that I will probably switch to.) 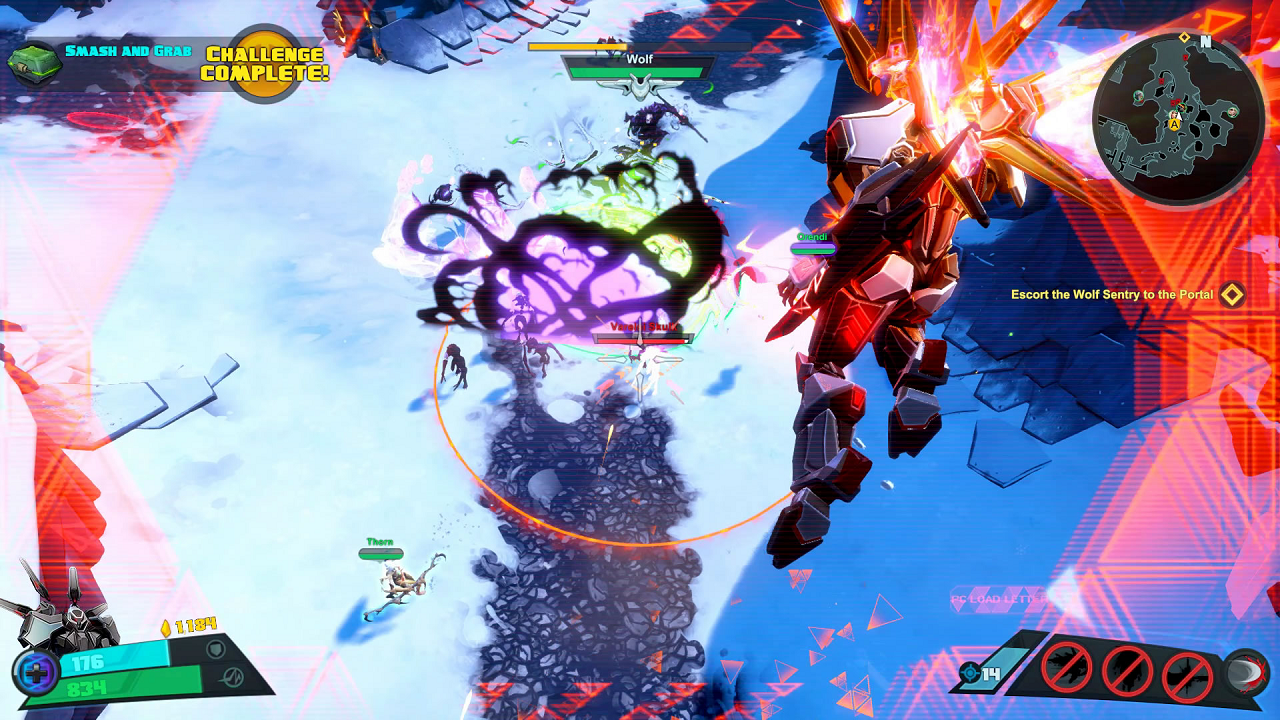 Battleborn has done what I would have previously thought was impossible: it has kept me interested in its multiplayer. I typically grow bored with adversarial multiplayer after about an hour or two, yet I have spent so much time with this title already and want to keep going. That there are a couple of less than stellar design choices when it comes to the campaign is easily forgiven. There is so much to do, perks to unlock and skins to find, that it will be a long time before this one is sacrificed from my hard drive.