So…yeah…about that article I wrote a while back about cutting Microsoft some slack. I’m not obliged to bring a previous opinion piece up, but at the same time this isn’t some indication I’m admitting defeat in what is an otherwise one-side-against-the-other state of play we’ve come to find ourselves in whenever Microsoft, Xbox One, PC — or all three of the unholy trinity — are mentioned in online conversation. And I’m not even referring to the recent somewhat-controversial unison of the Xbox & Windows 10 platform. So while it’s not mandatory for me to remind you of my previous thoughts on Xbox’s (and by extension, Microsoft’s own) future direction, so too I’m confident it’s not required for me to backtrack, or even apologize, for my previous conclusion that Phil Spencer and co. needed just that bit less animosity. For fans, consumers and keyboard warriors alike to take their feet (or should that be fingers?) off the gas a little and to look forward to the [then] console’s [equal emphasis of then] 2016 line-up. Of the likes of ReCore, Sea of Thieves, Fable Legends (yeh…about that), Scalebound (…and that) and of course, Remedy’s long-awaited new project, Quantum Break.

As we’ve already covered, Quantum Break is not a bad game. Flawed undoubtedly, but enjoyable in doses and dare I say it fun when its set-pieces are looked on a case-by-case basis. In all honesty, it’s one of the more enjoyable third-person shooters I’ve played in recent memory. Even with the misfit animations and questionable shooting, as our own Adam Beck signs off, it’s “a great game at heart, but it comes with a lot of underutilized potential.” A shooter that, while relying on cover-based mechanics, shines because of its main gimmick, time-manipulation, and let’s you know about it on an ominously-persistent schedule. What with all the refracting, shimmering and mesmerizing effects that grace the urban environments, it helps cool some of the heated discussion over the Xbox One exclusive’s dreaded 720p/30FPS scale. 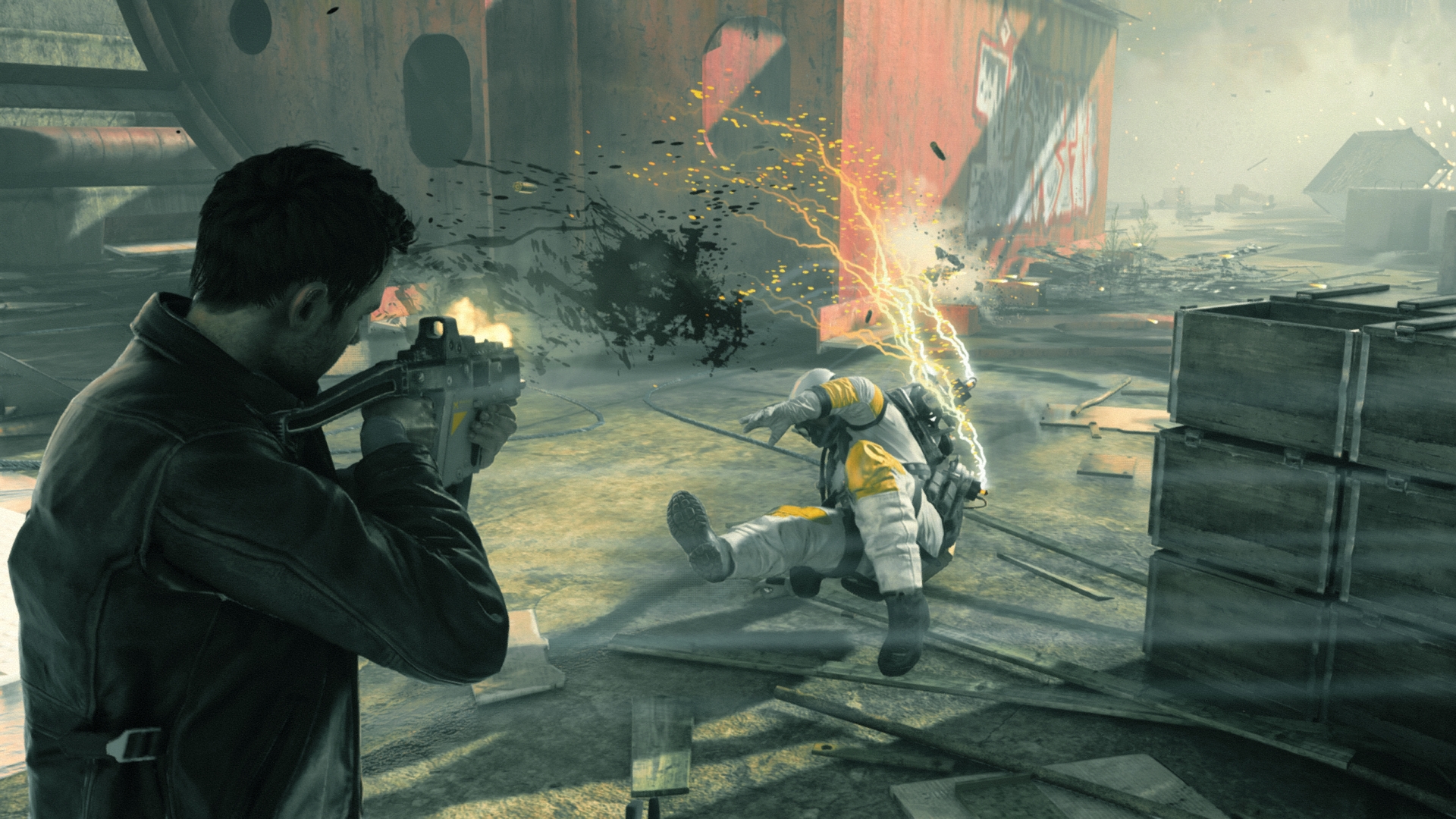 But I, on the other-hand, have decided on playing this title on PC. Yes, that did require me undergoing the mandatory “upgrade” to Windows 10 and browsing a digital store on my computer that wasn’t Steam, shock-horror. But Quantum Break remained intriguing enough a title, even Microsoft’s insistency to experience the majesty of 10, could not sway me the other way. More so with an equally-heated “discussion” over the game’s rather demanding recommended PC specs — details Microsoft would later rectify. But as you’ve seen from previous Microsoft announcements, it’s the mud that often always sticks…and that’s no different here. So let’s get down to it: Quantum Break on PC…on Windows 10…on Xbox-that’s-not-Xbox-but-is-an-app-called-Xbox.

Confused? You should be.

From the off, Quantum Break appears to present itself — like the in-game big-bad in Monarch Solutions — in some slick, professionally-managed stature…that in actuality hides a rather murky and often troublesome attitude. Those of you who prefer a multitude of customisable graphic options will be disappointed as the most specific attribute Remedy are willing for the players to fine-tweak are aspects such as Volumetric Lighting. And believe me, you’ll want to check that setting above anything else; volumetric lighting is arguably bears the greatest strain on Quantum Break performance-wise and given the game makes adamant use of this feature even in the early chapters, it’s an experience that will determine whether your set-up (or rather your build) will land you a decent mid-40’s frame-rate or one befitting of Microsoft Powerpoint. And believe me, the way the game’s dynamic lighting eats away at the performance is mad. What should play out, in an early example, as a tutorial-style shoot-out in the first chapter wound up a staggeringly sluggish slide-show that halted my play-time to little more than ten frames-per-second.

As mentioned, the way in-game settings are laid out, and worded more so as ‘Medium’, ‘High’, ‘Ultra’ suggests the developers (and perhaps Microsoft to an extent) would prefer the userbase to experience the game in a not-so-low preference. That Quantum Break is deserving of, at the very least, some moderate accolades on its graphics and to be fair even PC players may suffer from uncanny valley as the in-game cutscenes present some admirably detailed character models (facially) in contrast to the in-game, live-action [streamed] episodes in-between chapters. Perhaps it’s less impressive when you have a [GTX] 980 happily chugging away, but there’s no denying the game’s time-manipulation effects — be it the shimmering ripples, the stuttering, the way environments alter tone as if someone’s messing about with the hue settings — look just as nice on PC, than they do on the Xbox One. And when you’re not so much dreading the next instance of overuse on lighting and similarly dynamic aspects, Quantum Break moves on at a decent, though fat from paradisal, pace. Definitely not 60FPS. 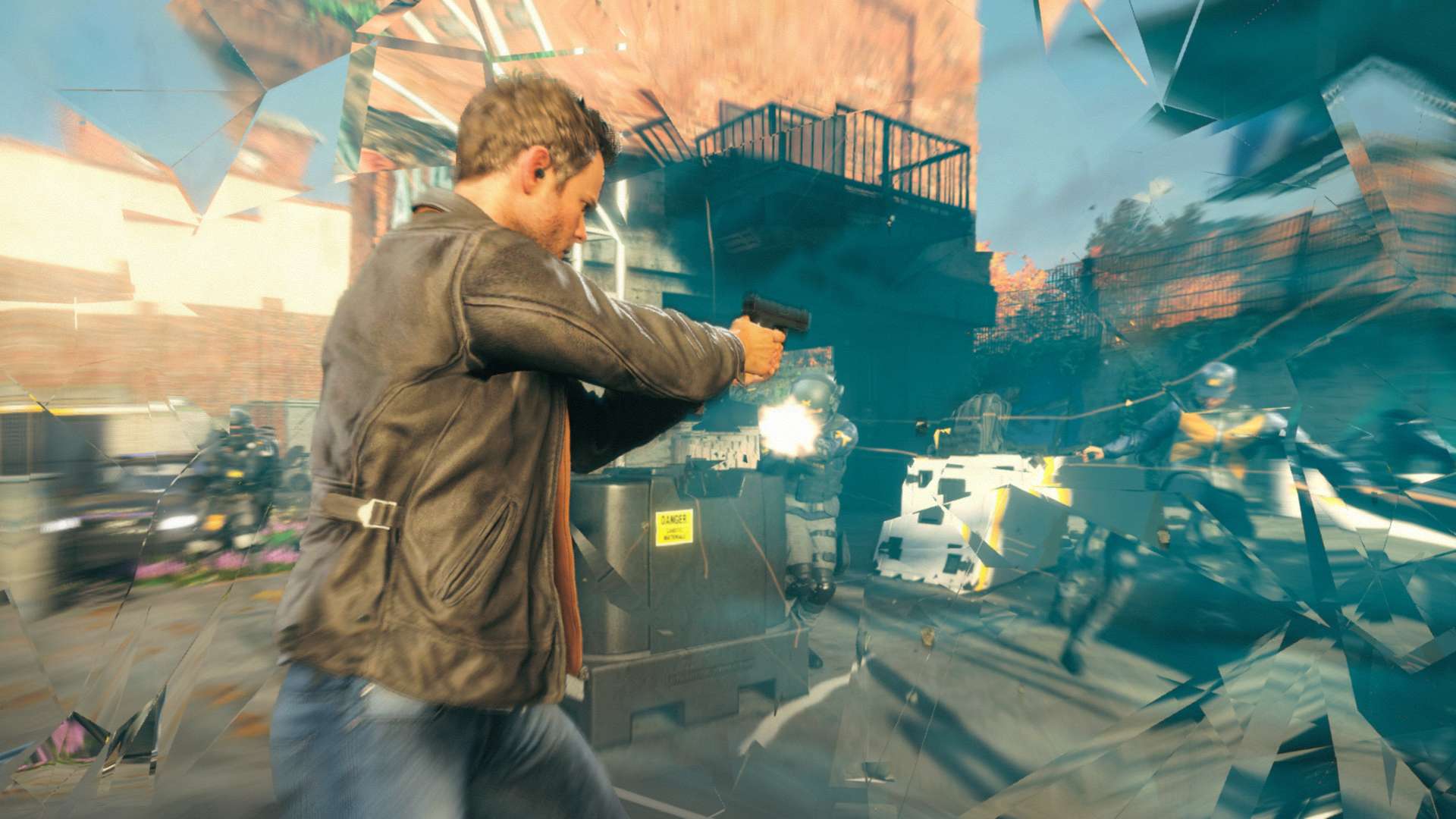 Providing you’re willing to experiment and mix-up calibrations between Medium/High/Ultra, Quantum Break can provide some neat, nuance additions over its console iteration and the time manipulation effects, aforementioned, do at least put a cheery on top of what some would argue is a rather dodgy-looking cake in the gunplay. I’d be lying if I said the visual shift in regular play, to using Time Dodge, to landing a Hollywood-esque explosion of…time?…lands some impressive visual effects to display. Providing you’re more than happy to roll along at the game’s carefully-planned pacing, the experience can be enjoyable. Providing, more pressingly, you don’t charge forward against the game’s desire, you won’t find yourself standing before an invisible part of the World the game has, at that point, not quite finished loading.

There are points (not a lot, but are memorably noticeable unfortunately) in Quantum Break that utterly break the immersion of wandering through an industrial or run-down part of a city and when you find yourself staring into the infinite skybox, waiting for a building or series of walls to finally spawn, there comes a point where you find yourself dreading if this is just a wrinkle in an otherwise perfectly smooth face (and highly detailed one at that), or the beginning of something much worse. The answer, unfortunately, ends up being the latter. I wanted, as I do every other game, to play through Quantum Break as much as possible, and to get the most of a single-sitting. Unfortunately, after a certain amount of hours, the PC build degrades in its performance, once more, to a stop-start stutter whereby the frame-rate drops significantly and you’re only option is to quit and leave the game for another time. It’s unclear at what point the game subconsciously decides you’ve had enough for one day — like a nagging advisory note that you should “take a break” — but I estimated around four hours in was the point my playthrough ultimately decided to take a complete nose-dive. Altering the in-game options proves fruitless too as it’s at this point where quitting seems like an inevitable and thus undesired choice.

And believe me, I would love to end talk of Quantum Break‘s supposedly-subtle “you’ve had enough for today” persuasion, but I haven’t even dove into the real meat of the game’s [at times] horrid performance. It pains me to say that I have not even technically finished Quantum Break. Not in a “right I’ve played enough; best get that article up and online” manner of speaking. But, in a literal sense, I can’t finish it. A jaggedly frame-jumping cutscene here and texture pop-in there and before I know it, the game freezes on me. Again…and again…and again. The end of Chapter 4 is where I place my last-known and furthest position within the main campaign and no matter how many times I return, no matter how many visual options I set to their lowest preference, the result remains the same. Quantum Break on PC just will not remotely function from this point on and the time of this article’s submission is a result of the numerous attempts of my retreading the same ground, only to have the back of Aidan Gillen’s person frozen on-screen. There’s little means of deciphering my own personal, figurative brick-wall in my playthrough — even when reading through Remedy’s listing-off of known issues of the PC version — and as such, there’s a tremendous weight of disappointment to be had when, finally, one has to walk away and write up a sizeable conclusion to what’s been played. The only thought that comes to mind initially, when doing so, is that you’ve just witnessed a member of the X-Men, a CIA guy and a Hobbit somehow find themselves in a video game of this intensity…and this deflating mood. 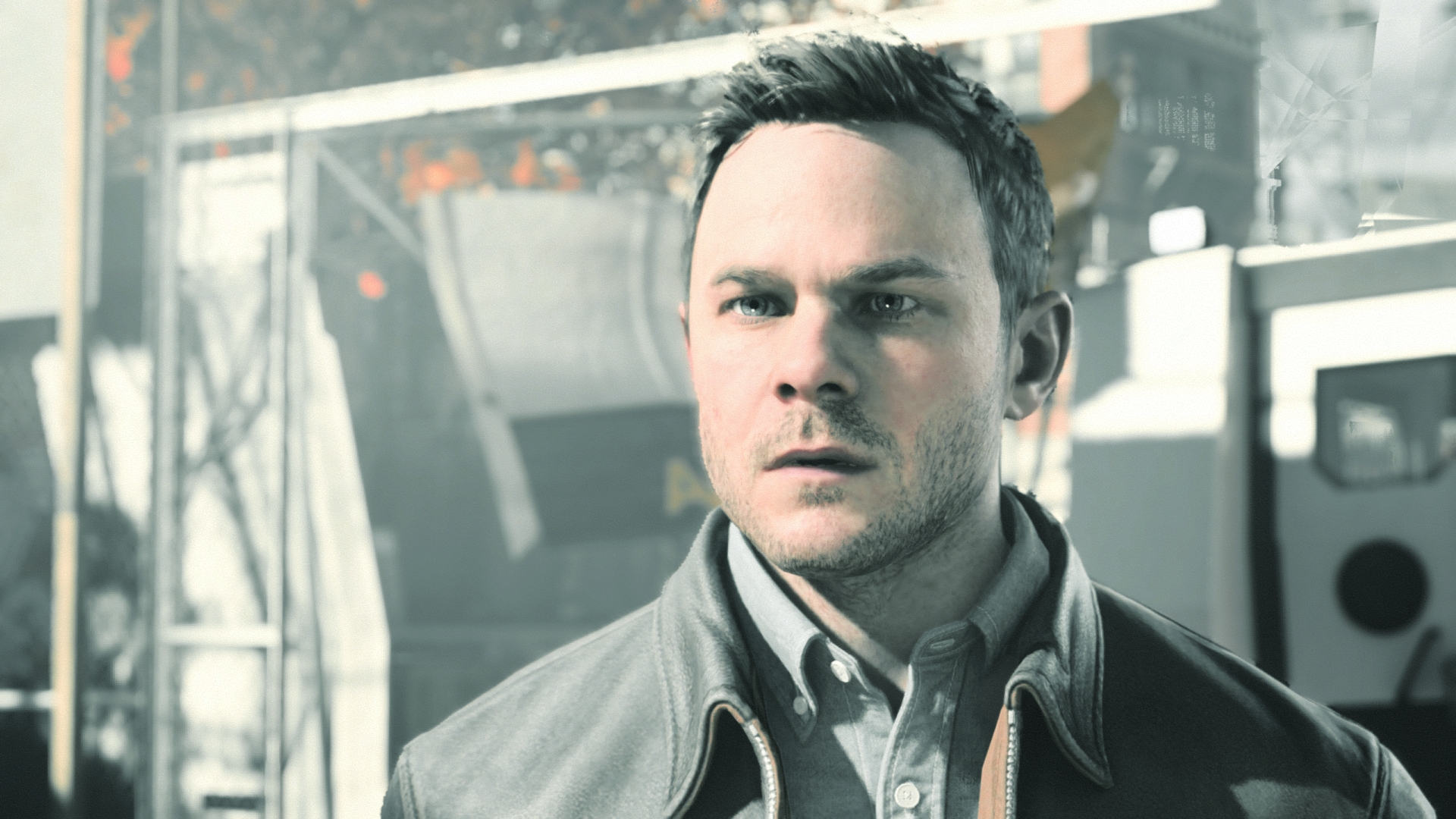 But is this sad affair really all that surprising? The Gears of War iteration for PC has been widely mentioned as having notable performance issues and given this has taken place but a month-or-so prior to Quantum Break‘s eagerly-anticipated release, it only goes to serve even greater questions as to Microsoft’s state of play in going ahead with their Universal Windows Platform plans. You can speculate all you want about their attitude towards the PC platform, but I’d be lying if I said I don’t hold the idea of a unitary platform as anything but intriguing. Intriguing in the “but will they f*** it up?” sense of the word. While I won’t go as far as to say they’ve done so with the release of Quantum Break on PC, the end delivery certainly feels questionable and demanding of further interrogation as the Xbox platform moves onto more digital and, dare I say it, DRM-leaning directions. We’ve all seen the collective attitude Ubisoft’s uPlay or EA’s Origin has garnered — and how they feel, in parts, to be but obstructions to other less-than-troublesome digital services/platforms — hence with what I can only deem a jarring experience, I advise even the most trustee of Xbox enthusiasts to take Microsoft’s PC handling with a pinch of salt.

Looking back, it’s disappointing to find a game that could have genuinely shone amid the speculative dullness of Xbox One’s position at the moment to be snuffed out by critically game-breaking performance issues that prevent those who’ve forked out the investment to experience something high-end. Will these same issues arise when other notably less-demanding titles in Cuphead or Below become available on the Xbox store? Part of me says no…but this is Microsoft (and by extension, the video game industry) we’re talking about. Anything…and I mean anything…can go wrong.