You probably haven’t heard of the game Assault Suit Leynos is remaking.

Target Earth came out on the Sega Genesis in 1990; it was rad then and it’s rad now. It’s being remastered and repackaged as Assault Suit Leynos by Dracule Software, and the easiest way for me to describe it is “one part Metal Slug, one part Galak-Z: The Dimensional.”

For the most part in Leynos, you’re just controlling a sick “assault suit” mech, shooting up other mechs and flying around with a jetpack in side-scrolling levels. You can fly over enemies and shoot them from behind, use the jetpack to dash away to regain cover, or just stomp forward and demolish everyone in sight indiscriminately (but you should absolutely use the jetpack). Soaring over levels you’d otherwise need to walk through feels great, and it makes the otherwise familiar shooter feel a little fresher. There’s a good heft to the jetpack here, with just the right amount of momentum to propel you a little bit forward after you let go of the thrust, and it feels like maintaining control over the jetpack during combat is a skill that will take players some time to master. Gravity plays a strong role, so your assault suit steps heavily, moves slowly and falls even faster, encouraging liberal use of the jetpack, which quickly became my favorite part of the Leynos demo.

While the on-ground section of Leynos represents its more Metal Slug side, its space sections will remind players of Galak-Z. Piloting your mech around in (relatively) open space, with a bit more freedom to fly up, down and around rather than just endlessly to the right, is a fantastic change of pace to the more restrictive on-the-ground sections. These sections are pretty straightforward in how they play and how the assault suit mechanics translate, but it’s good fun to take a break from gravity and just float around. These levels might have you fending off waves of enemies as they attack a friendly ship, so you need to survive long enough for the ship to begin entering a planet’s atmosphere before landing on the ship yourself to stay safe. Protection missions in games are rarely very satisfying, but Leynos‘s space levels do a good job at giving you enough freedom to multitask by zippily jetting from one side of the combat area to the other as you see fit. 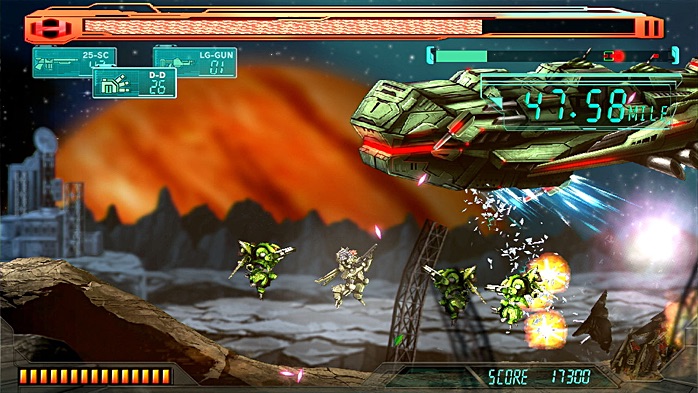 In true old-school fashion, Leynos is no slouch when it comes to offering players a stiff challenge to chew on. You get a regenerating health bar, which in some ways immediately makes Leynos easier and more accessible than many classic games, but not by much. You can’t just run and gun here without getting torn up pretty quickly by enemy fire, so playing smart by backing off to regain health and not getting in over your head is really important. It might occasionally feel instinctual to rush ahead when you feel overwhelmed by the occasional surge of enemies, but by doing that, you’re really just pushing forward into more enemies and boxing yourself in, and you’ll get cut down quickly. Learning to manage your enemies effectively especially comes into play when the boss fights begin, like a large ship that slowly creeps across the sky raining down hell. All the while, enemies will still be attacking you, so you’ll need to be able to divide your focus — and your fire — to survive.

A big part of taking out enemies quickly, of course, will be choosing the right weapon for the job. I had three weapons I could choose from — a shotgun, a light machine gun and a grenade launcher of sorts — and given the overall difficulty of the game, it became very important ensure I was switching between weapons: shotgun up close, light machine gun far away, grenade launcher if things get hairy or a boss shows up on the field. You can earn more weapons over the course of the game, but interestingly enough, the unlocks are determined by your performance. If you’re doing well and racking up good score rankings, you’ll unlock new weapons between levels; if you’re not doing so well and pulling down mediocre scores, well, you better get used to your initial weapons. Most games that rank you for score are hard-pressed to find a good way to incentivize you to care; players without friends on the leaderboards to compete with have little reason to push themselves to get a higher score. But by keeping new unlocks behind the score paywall, Leynos has found an effective way to encourage players to get better with the tools they have and the basic mechanics of the game before moving on to new weapons. Customizing your assault suit to your playstyle will play a big role here, so it’s worth going back through old levels to hone your skills and unlock better tools.

Assault Suit Leynos is looking like a great revival of an underappreciated classic. If you like jetpacks, mechs and a ripping updated soundtrack, keep an eye out for Leynos. It’s expected to release this summer for PlayStation 4 and PC.